Wesley So leads the rapid section of the Paris Grand Chess Tour after scoring two wins and a draw on Thursday. Levon Aronian and Sergey Karjakin share second place one point behind. Only a week ago, in Leuven, a very similar script was being written - will we see the same ending in Paris? 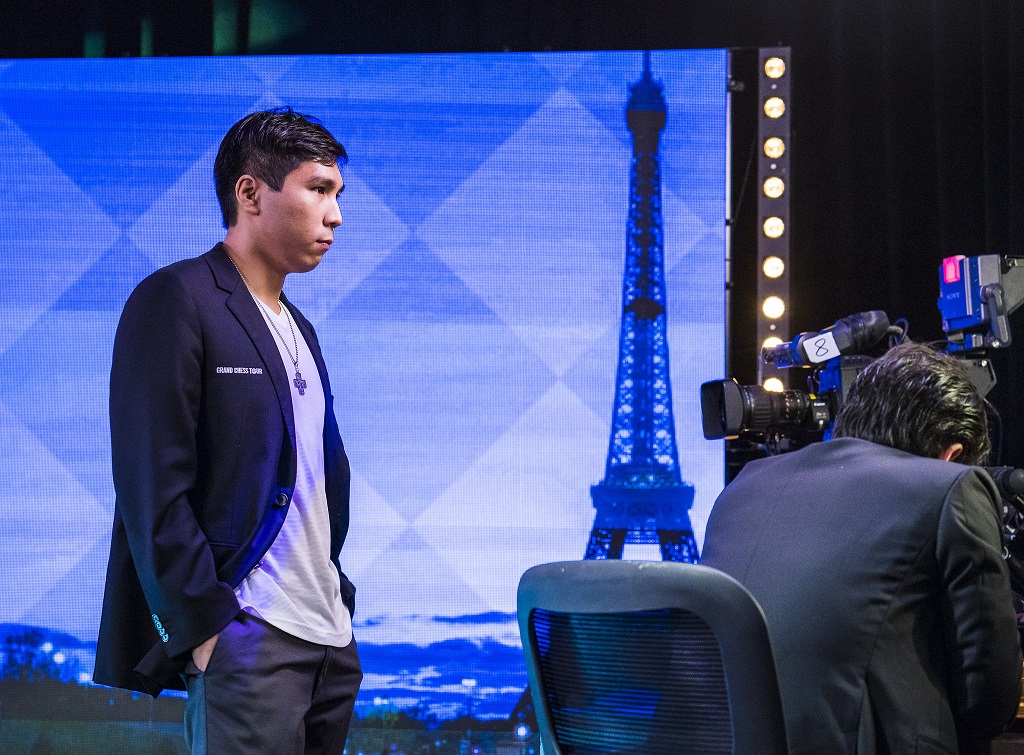 Wesley So isn't slowing down


Wesley So added two consecutive wins to his victory in the last game of the first day to become sole leader after five rounds. First, he beat Vladimir Kramnik with the black pieces after winning the exchange in the middlegame of a Symmetrical English. Then, playing White, he entered a complex tactical battle against Alexander Grischuk:

White is about to win the exchange, but he also has an undeveloped kingside. Black, in return, has many active pieces. The computer, of course, prefers the material, but it is certainly difficult to play with both colours. In the diagram position, there followed 19.Nxf6 Qxd4 20.Rxd4 Nxf2:

Here, So gave an important check with 21.Nh5+, forcing Black to weaken his pawn structure. In the ensuing endgame this was one of the key factors that gave White the win. 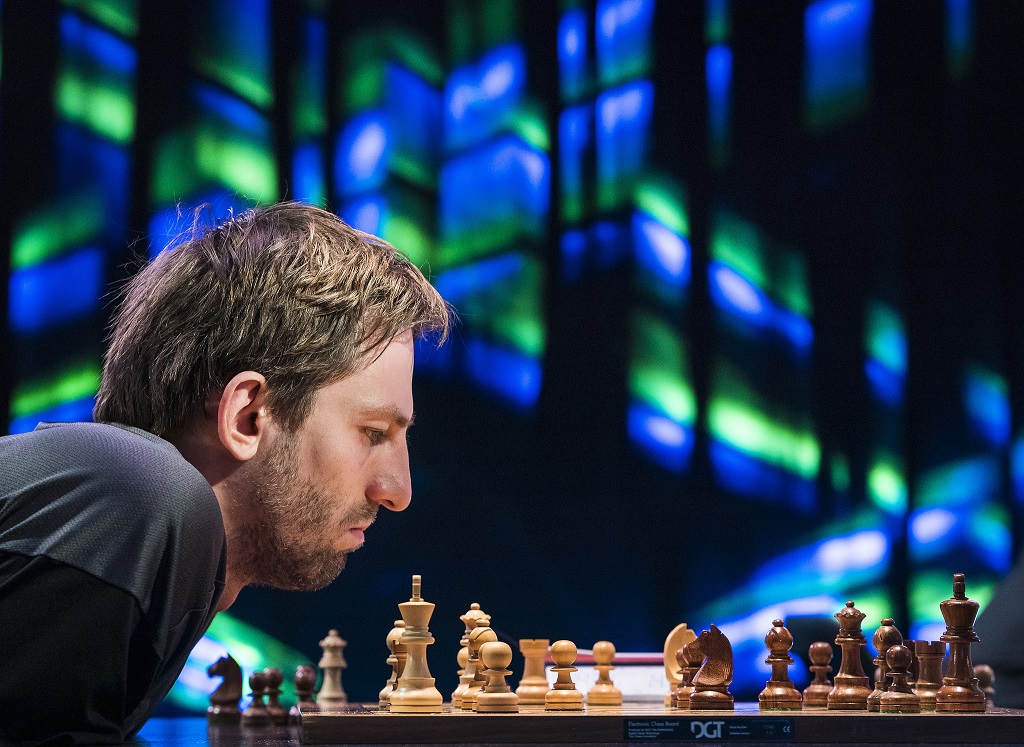 Aronian in the hunt

Levon Aronian started both days in Paris with a victory, which, in both cases, was followed by two draws. On Thursday, he played the Slav Defence with Black against Shakhriyar Mamedyarov, and had to face an aggressive setup. The Azeri — like Aronian himself had done many times last year — advanced his g and h-pawns early in the game. A tense balance was maintained until move 31:

Former World Championship challenger Sergey Karjakin scored two wins in Thursday's final rounds after having drawn his first four games. First, he cleared any doubts about his alleged pre-arranged draws with Mamedyarov, as he beat the Azeri with White in 38 moves.

Then, with the black pieces against Vladimir Kramnik, he took advantage of the holes created around White's king:

With these results, Karjakin is now one point behind the leader. The Russian will face Wesley So with the white pieces in the eighth round. 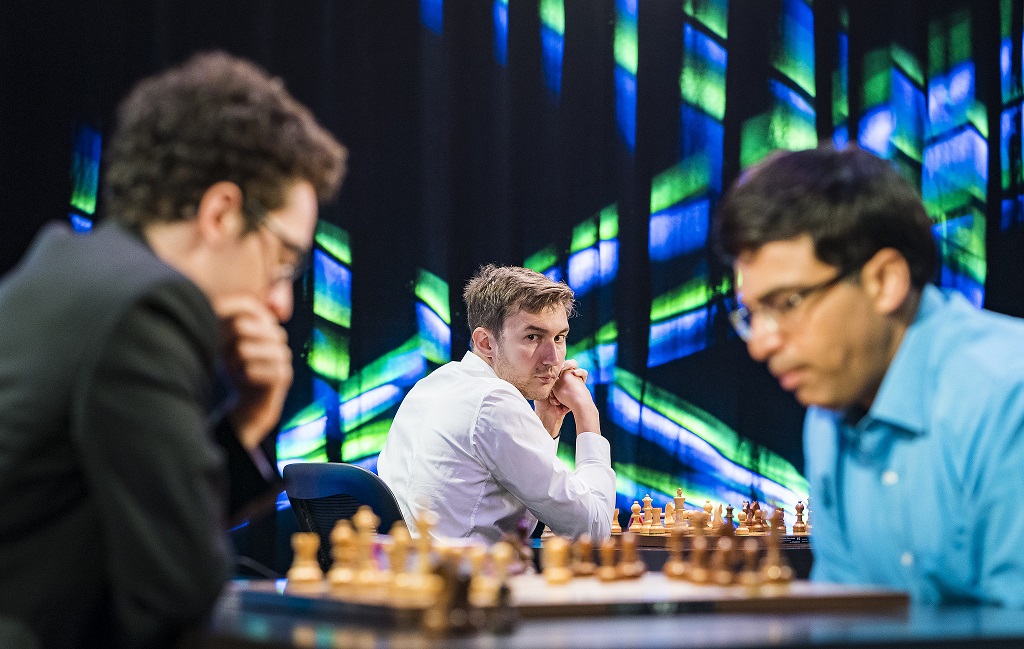 In a game that seemed to be destined to finish in a draw, Hikaru Nakamura did not stop pressing until getting a victory over Fabiano Caruana. After 81 moves, a symettrical structure indicated that the players would split the point pretty soon:

Here, Caruana played 81...Ne5, giving up a pawn. White took it with 82.Bxh5 as Black can't recapture due to the knight fork on f5. The computer does not see a very large advantage and probably in a classical game Fabi would have saved the draw, but the small material superiority invited Nakamura to try until the end. This was the position after 100 moves:

Hikaru had not captured on e4 earlier because Black could have sacrificed his bishop for the pawns, with Bxe3 and Nxe3, getting a drawn endgame. In this precise configuration, however, 101.Bxe4 is possible, as 101...Bxe3 would be followed by the fork 102.Nf5+ (like on move 82!). With two connected passed pawns, Nakamura sealed the victory after 123 moves. 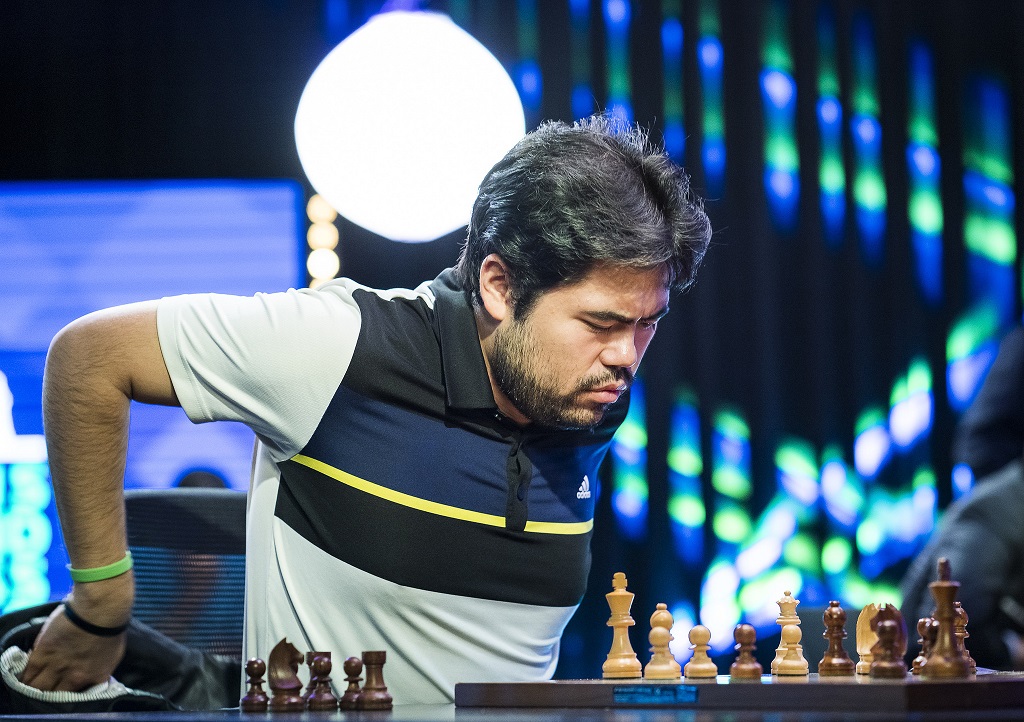 There's a sole leader so far in Paris, but his one-point advantage means everything is still up for grabs:

Tomorrow, the first round of the day starts at 14:00 CEST. As always, you can follow it live with commentary and computer analysis here on chess24!

And you can replay the live commentary from Yasser Seirawan, Jovanka Houska and Alejandro Ramirez: