Three players finished the first day of rapid chess on +1 at the Paris stage of the Grand Chess Tour. Anand, Aronian and So opened up a small gap, but nothing is even close to being decided in the 27-round tournament. In such a uniform field, it is striking that Fabiano Caruana sits alone in last position after losing twice in the first three games. Apparently the American's mind is indeed set on the match against Carlsen. 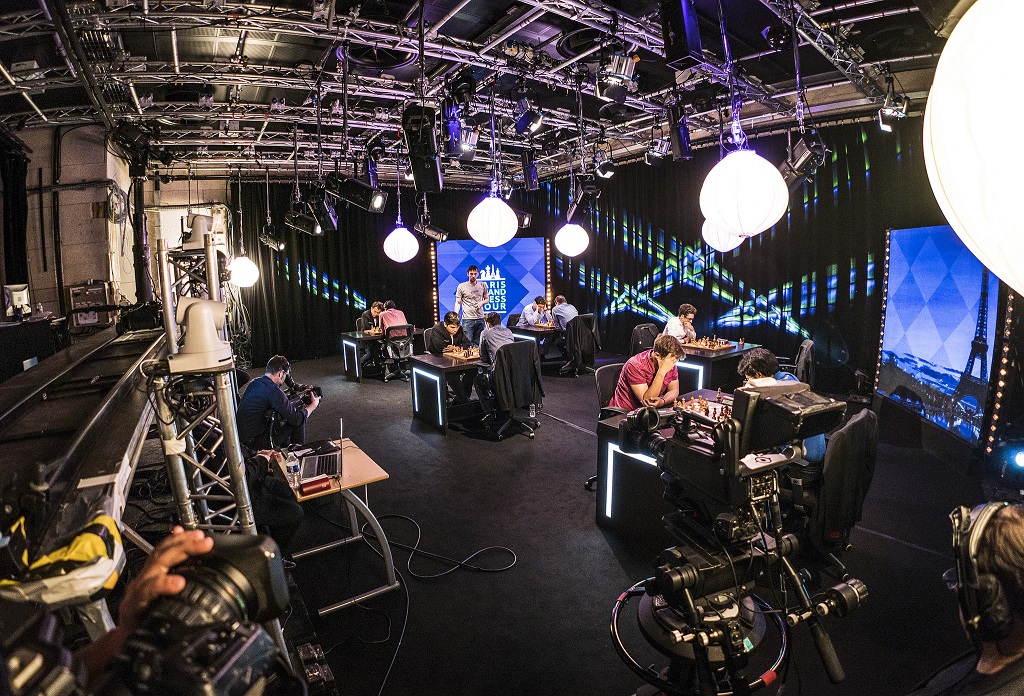 Fabiano Caruana seems to be destined to face the favourite in the first round of every major closed tournament. Since Magnus is not playing, Fabi was paired in the opening round against man-of-the-hour Wesley So. His compatriot had also been his first opponent in Belgium and, like this Wednesday in Paris, Caruana had been defeated. The only difference: in Leuven, Caruana was White.

After the opening phase, White had a slight initiative, but Black's position seemed strong enough to maintain the balance. Since Black had somewhat weakened his king's protection with h5, So decided to activate his rook and create threats with his light-squared bishop. Black was passive, waiting perhaps much too patiently:

It is difficult to create a winning plan for White, but that does not mean that Black can draw simply by waiting. However, that is precisely what Caruana did — in the next three moves, he manoeuvred his king without any plan in sight: 23...Kg7, 24...Kg8, 25...Kh8.

So arranged his pieces in attacking positions and, when he judged it was time, advanced with 28.g4 and 30.h5. To avoid losing against a devastating attack, Fabi gave up a pawn and invited the exchange of queens. Wesley entered a rook endgame a pawn up, and nurtured his advantage until getting his first two points in Paris (the rapid section grants twice as many points per game). 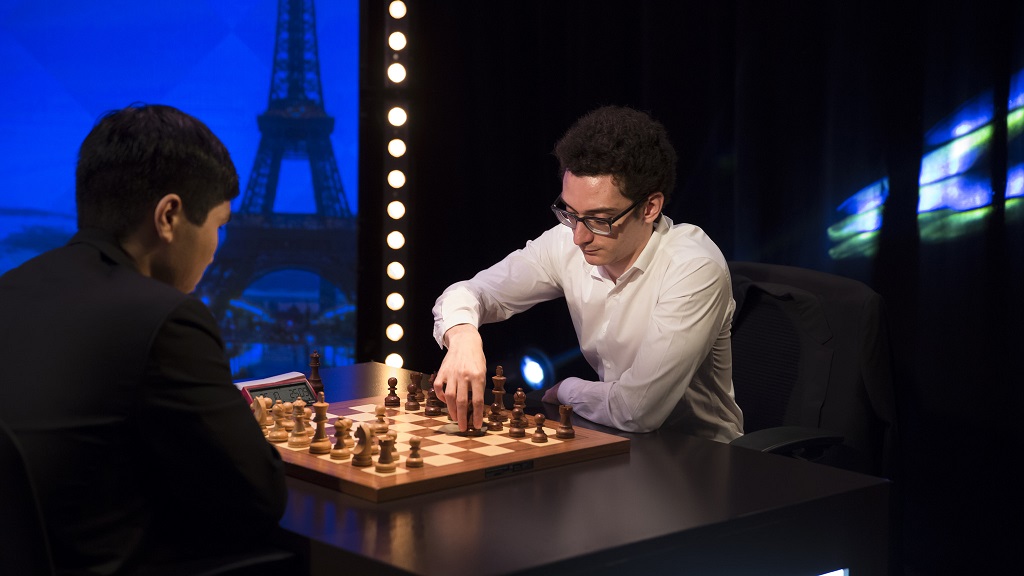 Caruana lost against So in the first round | photo: Spectrum Studios, Grand Chess Tour

The other winner in the opening round was Levon Aronian, who beat Alexander Grischuk with White after strategically outplaying his opponent in the middlegame of a Closed Sicilian.

For quite a while now the clashes between Viswanathan Anand and Vladimir Kramnik provoke chess fans to feel a touch of nostalgia. After all, these two veterans have been entertaining us with exciting battles for about thirty years. Nowadays, it is no surprise that either one of them refers to the other as if talking about a friend or an accomplice.

In his second round game in Paris, Anand played with White and, in a Berlin-Wall-style structure, he got the small pull typical of these positions. Kramnik accepted the structural deficiencies in exchange for the bishop pair and seemed to have things under control, at least until move 33:

Here, Kramnik played 33...Bc5, when the computers suggest fixing the structure with 33...c5. Vishy took advantage of this slip, and did not hesitate to advance his central pawns with 35.d4 and 36.c5. The Russian was left with tripled pawns on the queenside and doubled pawns on the kingside in an endgame with queens and rooks. Anand manoeuvred his heavy pieces effectively until Kramnik made the final mistake: 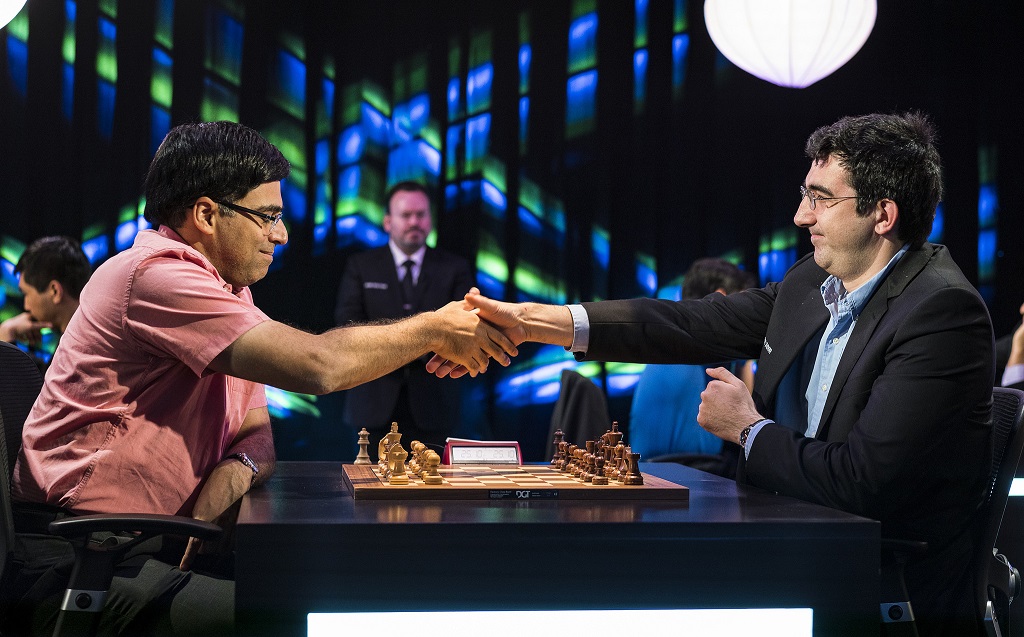 In the same round, Wesley So lost his first rapid game of the Grand Chess Tour, against Shakhriyar Mamedyarov. The Azeri won a pawn and had to prove that that was enough to win an opposite-colored-bishop endgame against one of the best defensive players on the circuit.


The two players that lost in their previous games bounced back immediately with victories in the third round. Big Vlad used a small positional advantage à-la-Kramnik, and later justified the saying "Kramnik's passed pawns always promote" to surpass Mamedyarov in 36 moves. Meanwhile, Wesley So and Maxime Vachier-Lagrave created an almost perfectly symmetrical position:

The only thing that breaks the symmetry is the fact that White has castled and Black has not. Also, it is worth noting that the bishops are of different colors. Black exchanged as many pieces as he could, but could not prevent White from entering his position with the queen. On move 24, So decided that giving up his queen for a rook and a bishop was the right way to go:

White has just played 24.Qxb6 and, after 24...Re7, he must give up his queen with 25.Rxe7 Qxb6. There followed 26.Rxf7+ and, after repeating twice, 29.Rxf6. Obviously, So had calculated that this material balance favours him. A few moves later, MVL resigned in a virtual zugzwang:

The black king literally cannot move, so the queen must abandon the defence of the c5 pawn. White will capture this pawn and the one on a5 in exchange for his own on b3, and will not have many problems to promote on the queenside. It was definitely a didactic and entertaining game. 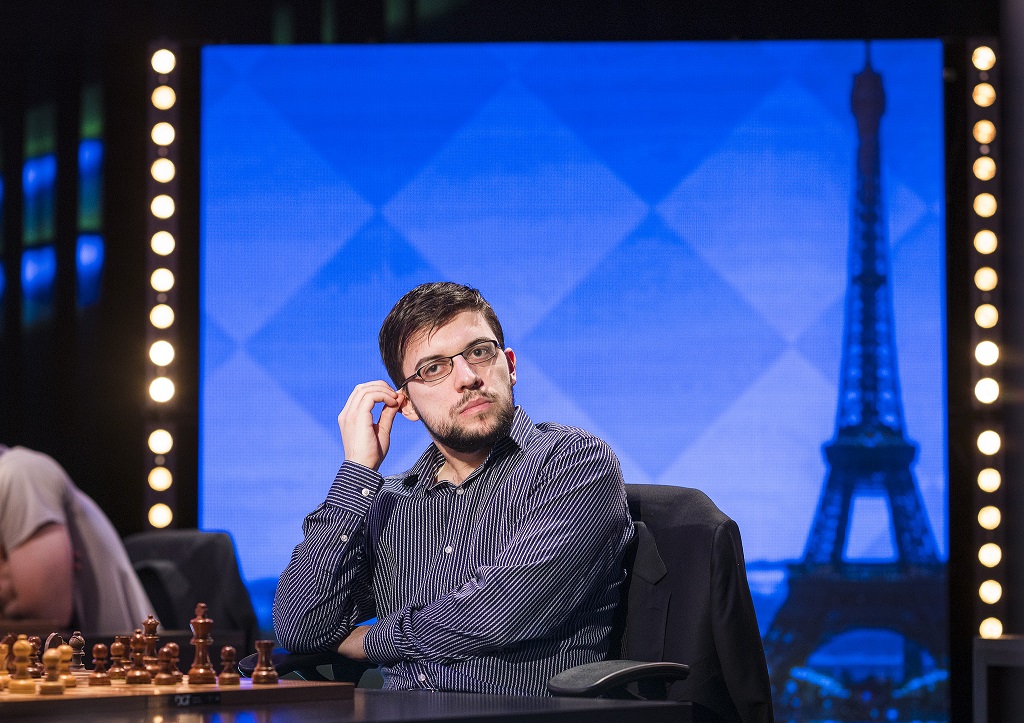 Maxime Vachier-Lagrave will have to recover quickly if he wants to fight for first on home soil | photo: Lennart Ootes, Grand Chess Tour

Fabiano Caruana's second loss of the day came in his game against Alexander Grischuk. The Russian gave up a pawn in exchange for the initiative on the kingside, and did not hesitate to give up an exchange to create a lethal attack against the white king:

Grischuk played 27...Rxf3! and Caruana could not withstand the onslaught against his unprotected king.

The second day of action starts tomorrow at 12:00 CEST to avoid a clash with the French football team's next World Cup match. As always, you can follow it live with commentary and computer analysis here on chess24!

And you can replay the live commentary from Yasser Seirawan, Jovanka Houska and Alejandro Ramirez: