In a centuries-old rivalry, Oxford and Cambridge Universities squared off over the weekend for an 8-board match at the Royal Automobile Club in central London. Oxford won this round 4½-3½, narrowing Cambridge's overall lead to five match wins. The two teams have been competing in a variety of sports, notably rowing, since the 19th century. The first chess match was in 1873 and this is now the 135th — the encounter was suspended during the World Wars. Described as "one of the great traditions of British Chess", the match was attended by various alumni guests including grandmasters. Luke McShane and Jon Speelman — both graduates of Oxford — provided a brief commentary on the games in progress for the chess24 broadcast. 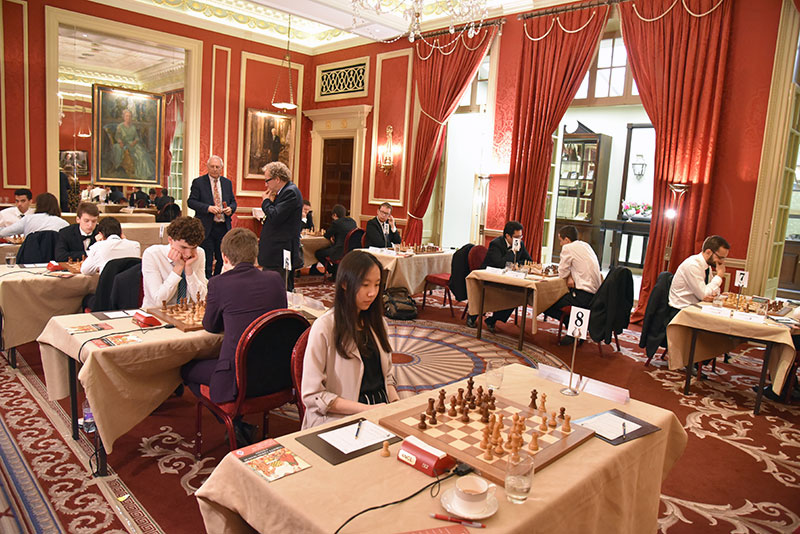 You can replay any game by clicking on the result:

IM Daniel Fernandez, playing board 2 for Cambridge, was awarded the Brilliancy Prize by GM Ray Keene in consultation with McShane and Speelman, for his "high-class swindle" after recovering from a bad blunder:

The start of the "high-class swindle" phase

After 29.h4 Kg4 White is suddenly in for a world of hurt. The game ended prosaically:

Fernandez has three grandmaster norms, and aims to secure the necessary rating to reach the GM title after he graduates this June.

Also notable was the board 8 game which featured the only two women in the competition, Aleksandra Kozera (Oxford) and Danielle Ho En Huei (Cambridge). After 16.Rdg1 this position was reached:

Here Black thought for an hour and 20 minutes! Curiously, there are 28 games in our database in this position, including two lost by a young Magnus Carlsen from the black side, against both Anand and Topalov back in 2008! 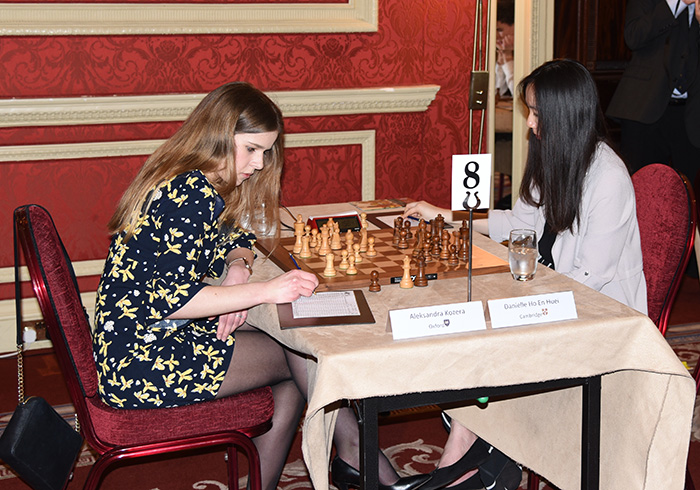 The board 8 clash was closely followed in the commentary room | photo: Macauley Peterson

Chess author and journalist John Saunders, who was attending his 17th Varsity Match, noted that for the first hundred years there were no women competing in the match. Oddly enough, when women did begin to play in the late 1970s, the match was played on seven boards, with the additional eighth board dubbed "the Ladies board", and not counted for the match outcome except in the case of a tie. That soon changed, and indeed by the end of the 20th century you could find Harriet Hunt and Ruth Sheldon competing on the top board. This year, it was just a coincidence, as the two women were among just three players rated below 2000.

People used to come to this match not to see the players play, but because it was a society occasion... really for the first 70 or 80 years of its history.

Grandmasters have graced the ranks of both teams, and match alumni also include GMs John Nunn, Ray Keene, Jonathan Rowson and Amon Simutowe (the first GM from sub-Saharan Africa).

The Margaret Pugh Varsity Chess Match Trophy is now kept by the Royal Automobile Club after an incident when the Cambridge team left it on a train heading home in 2006! | photo: Macauley Peterson

The Best Game prize went to Oxford's sixth board, Jamie Horton. After sustained pressure on the d-file Horton crashed through in this position:

The Royal Automobile Club has hosted the Varsity Match since 1978, and a strict dress code is observed, making this one of the only chess competitions in the world where you'll find the players competing in tuxedos! 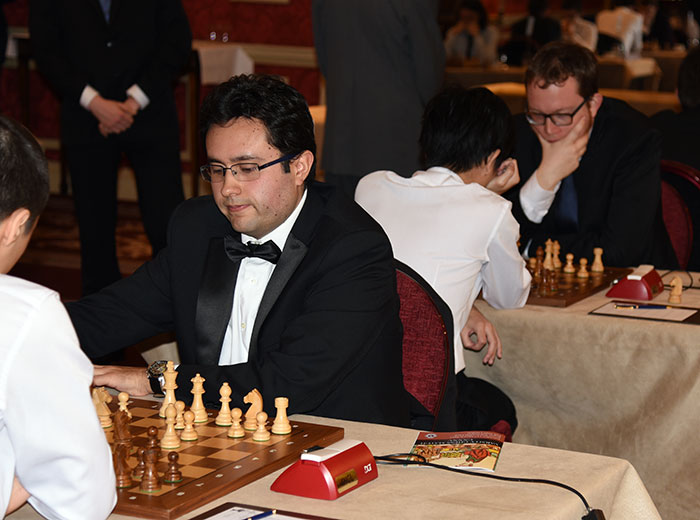