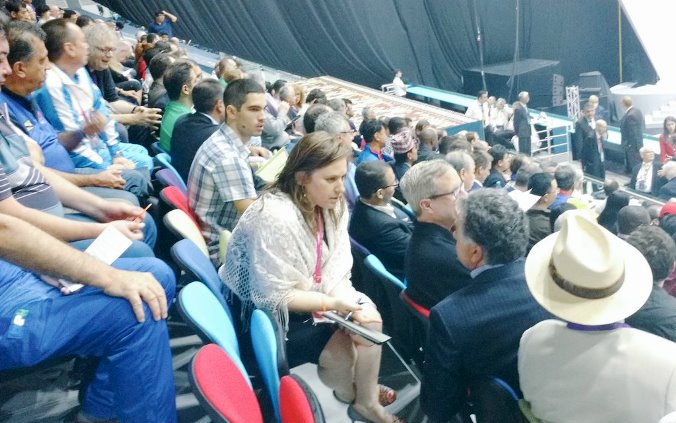 Judit Polgar, Jon Speelman and Malcolm Pein are leading a petition to remove the new anti-cheating rule that requires players to inform an arbiter when they want to go to the toilet. The petition argues the rule is absurd, humiliating, unworkable and can help opponents while penalising players who are nervous, older or may have a medical condition. They invite captains and players to sign the petition.

While the venue, accommodation and general organisation of the 42nd Chess Olympiad in Baku have met with almost universal praise, the new anti-cheating regulations introduced by FIDE have proven controversial.

A number of team captains and players have launched a petition to call for the rules to be changed:

We, the undersigned captains and players at the Baku Olympiad (Open and Women’s sections), wish to protest at the new rule regarding notifying arbiters when players need to go to the lavatory, noting that:

1. The lavatories have always been considered part of the Playing Area, rendering the rule absurd.

2. This is humiliating to the players who should not have to discuss their bodily functions with FIDE officials.

3. In order for the process to work the arbiters will have to remain at their stations at all times, presuming that FIDE doesn’t intend that players become unwell in the Playing Area.

Even the arbiters may have to go to the lavatory themselves at some stage and it is quite unacceptable that players under great stress should have to await their return.

4. Indeed, under the stress of chess, many players go to the lavatory repeatedly during their games.  This in no way implies that they are cheating, merely nervous. Older players and those with a medical condition may also frequently have to visit the lavatories.

5. Informing the arbiter may give information to the opponent, who may decide to make a move quickly to run down the clock. A player should not be required to perform an action which may aid their opponent.

We respectfully suggest that it is not FIDE’s role to penalise players for their nervousness, age or a medical condition and trust that this noxious rule will be rescinded.

You can see the original petitions and some of the signatures below: 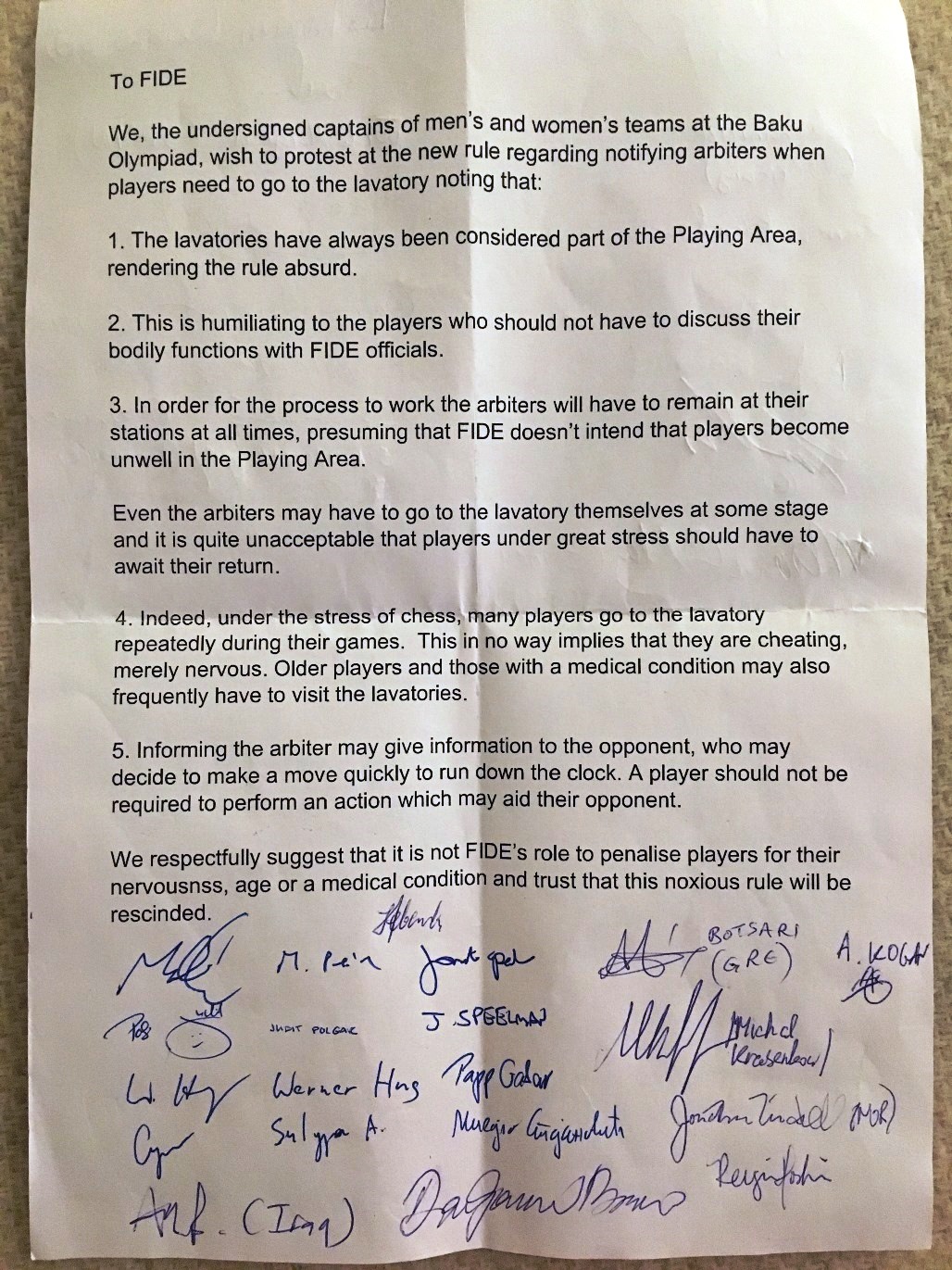 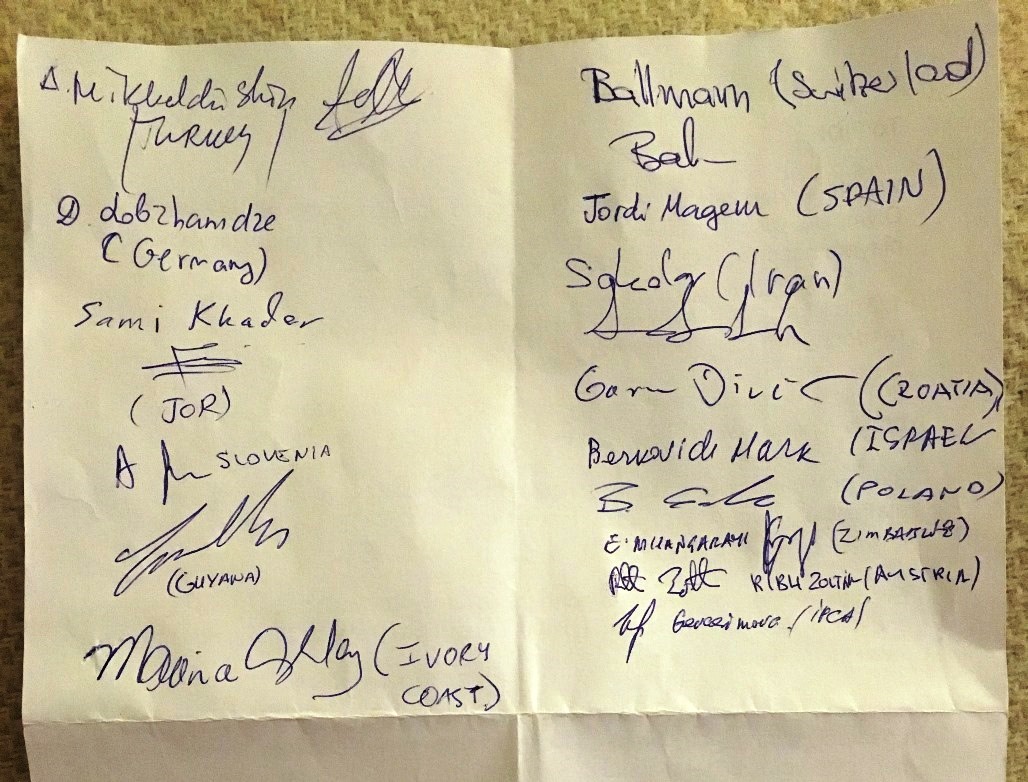 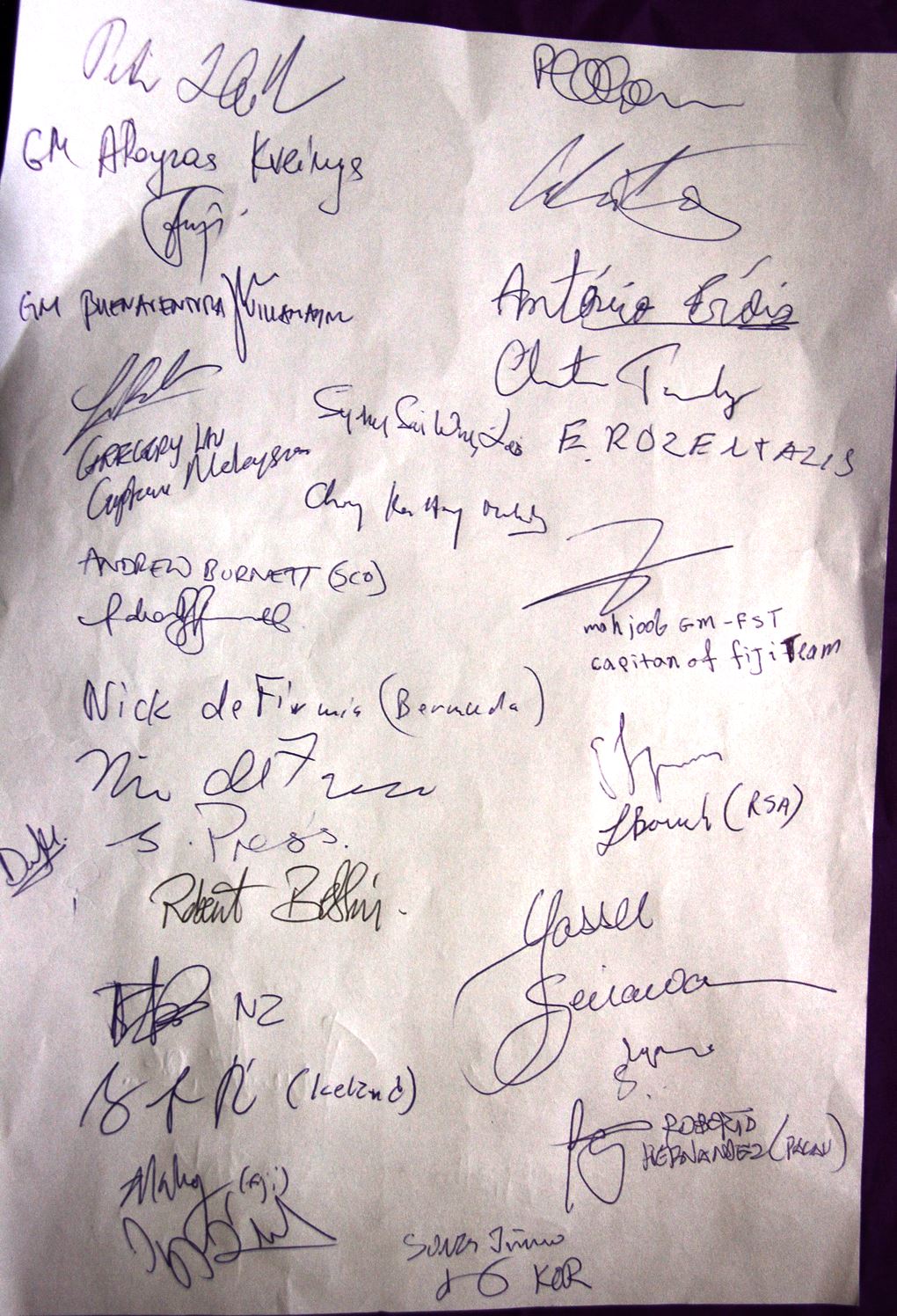 We will be updating the list of signatures above (and many remain to be deciphered). If you are a captain or player at the Baku Olympiad you can add your name by signing a list in person in Baku, write to divis@chess24.com (David Martinez) or, if you have a verified title here at chess24 (e.g. GM next to your name), you can simply leave a comment below this article. To verify your title you can write to support@chess24.com, though some form of identification – e.g. a FIDE certificate, will be required.