The biggest commercial TV channel in Norway, TV 2, recently announced that they had bought the TV broadcast rights for two big chess events involving Magnus Carlsen: The upcoming Gashimov Memorial in Shamkir, Azerbaijan (April 20th—30th), and Norway Chess (June 2nd—13th) will be covered on the channel. 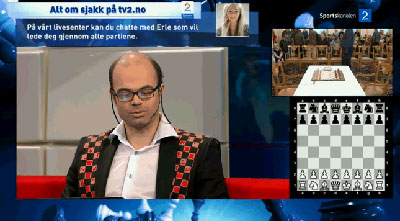 These days we are seeing national TV channels fighting for the right to show live images during major chess events!

This is not the first time TV 2 has covered chess. Last year TV 2 was lagging behind its competitors' chess coverage. Seeing the enormous interest generated during last November's World Championship match, they started producing daily broadcasts on their own sports channel and website. In January they bought the TV rights for the Zürich Chess Challenge and sent a crew to report from on site.

The Zürich coverage was apparently a success for TV2. The network's head of media rights Bjørn Taalesen explained why they decided to buy the rights for two major chess events.


The numbers we've seen on previous tournaments have proved that chess is of interest, so we're very pleased that we, in the future, will show major chess events such as Norway Chess and the Gashimov Memorial. The interest in Magnus Carlsen just seems to be growing.

Interest in chess in Norway was given a massive boost from the World Championship. Having the national hero Magnus Carlsen fighting for the title was an important factor by itself, but it was also helped by the fact that several Norwegian TV channels and online newspapers covered the match move by move in live studios with expert commentators.


NRK, the state-owned and largest Norwegian media company, featured an experienced chess coach as their main commentator, and they were able to make chess exciting for the general public by breaking down the action from a beginner's point of view. 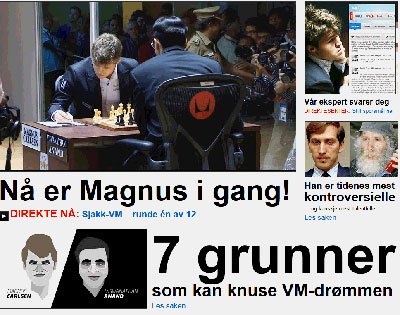 The resulting ratings were beyond all expectations. Viewership via online newspapers and text-based live coverage proved that chess can reach mainstream appeal, contrary to the view of FIDE Executive Director Nigel Freeman, who told Norwegian paper Dagbladet that if FIDE does not receive bids for the World Championship match by the end of April, it will indicate that chess is not marketable enough.

Of course it's not a given that chess would succeed as a TV sport in Norway. In a country where skiing still dominates television sets, many viewers don't even know what en passant or stalemate means. They could easily be bored during a seven hour game unless the commentators are able to maintain dramatic tension, and hold their interest.

Ola Stenberg, chief editor of VG TV, the web TV channel for Norway's largest newspaper, was amazed by the viewership numbers for the World Championship, which reached up to 600,000 pageviews per day. Speaking to Journalisten.no:

Over time, we have not seen anything like this during a sports event. When the game is at a high, the traffic is massive.

Not only was the coverage itself a huge success in terms of the enormous audience, but VG received international recognition for its marketing campaign. The English speaking documentary Last big title, by Benjamin Ree, released five days before the WC match, quickly became popular, giving VG even more attention.


At the European Digital Media Awards, VG won the Best Reader Engagement award for its marketing campaign leading up to the World Championship.

Their video explaining how they set up and promoted their coverage is a must-see:

Chess Olympiad in Tromsø to be shown on NRK

NRK also received awards for impressive coverage of the World Championship match having bought the TV rights for a fee of 1.5 Million NOK (180,000 Euro).


A few weeks ago, it was announced that NRK had also won the rights to broadcast the Chess Olympiad, in fierce competition with VG and TV2. NRK's executive producer, Beate Hårstad Jensen, commented in a story published on the official Olympiad site:

We look forward to taking chess forward on TV and other media after the success we had with the World Chess Championship in November, and are really excited about how we're going to develop this.

In some cases the demand is so fierce the organizers have been able to split the rights among multiple networks. While TV 2 acquired the television broadcast rights for Norway Chess, VG along with local newspaper Stavanger Aftenbladet have the web rights and will provide video images from the event.


The chess craze is so strong in Norway, it may not be entirely dependent on Magnus Carlsen; on April 15th TV 2 announced another televised chess event: GM Agdestein and GM Hammer will play a 6-game rapid match in TV 2's Oslo headquarters for one of the two remaining spots in Norway Chess.

The match will be broadcasted on TV during the network's Gashimov Memorial coverage on April 26th and 27th. Ellen Carlsen and Hans Olav Lahlum will again provide commentary. 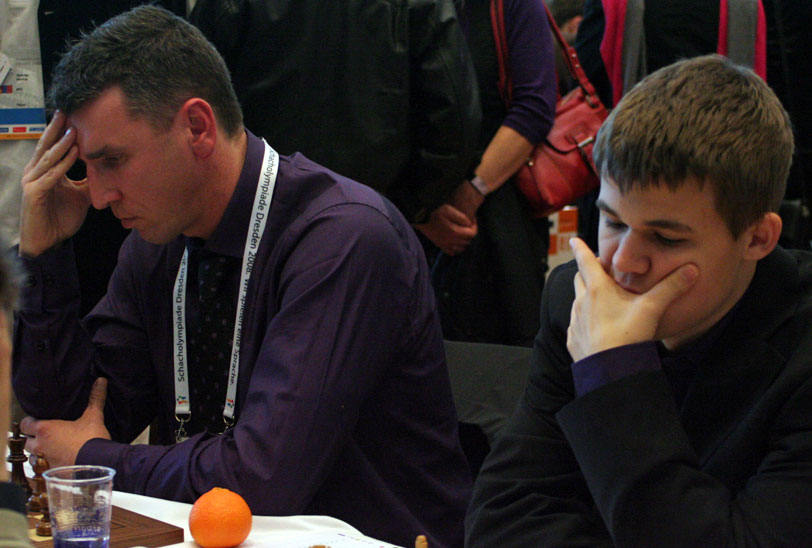 Simen Agdestein next to a young Magnus Carlsen at the 2008 Chess Olympiad in Dresden | photo: Macauley Peterson

This is actually the first time a non-Carlsen event will be covered live on national TV: Agdestein is a fan:


It's definitely going to be a stress factor, but it's actually really nice. This is what we want. It's really fun that they will cover it.

These are clearly exciting times for chess in Norway!

Tarjei J. Svensen is a 32 year old Norwegian chess enthusiast & reporter, currently working for sol.no, one of the country's largest news sites. He has been active in the Norwegian chess community as a player, arbiter, tournament organizer and webmaster for 15 years. In August he will be part of Tromsø's Chess Olympiad organization.