Fabiano Caruana’s rocky start to Altibox Norway Chess 2018 continued in Round 2 as he again made a “kind of ridiculous” blunder, this time against Shakhriyar Mamedyarov. He gave up a pawn for no reason, but luckily by that point he was a pawn up and the game simply fizzled out into a draw. Karjakin-Carlsen and the other games also ended peacefully within three hours, though Peter Svidler summed up, “this was not a boring round, it just ended in five draws fast.” 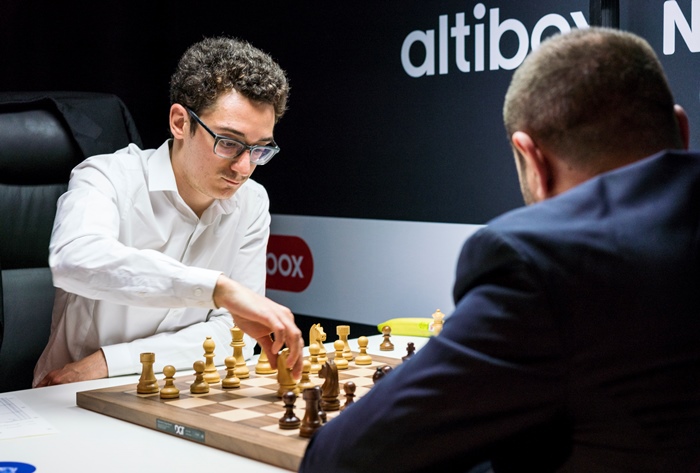 Replay all the Altibox Norway Chess 2018 games using the selector below:

Let’s take one position from each of the games, starting with the most dramatic, not to say bizarre, moment of the round:

In this game Mamedyarov played Caruana’s big weapon of 2018, the Petrov, against him, and although White got a visually aggressive looking position it seems objectively Black was doing just fine. It didn’t seem that way to Shak, though, and he admitted, “I thought it’s just a bad position, and for that I gave you a pawn, but it was not right”.

That brings us to the diagram position, where White is a pawn up and, despite technical problems ahead, can certainly fight for a win. Fabiano revealed 21.h5 was a move that crossed his mind, and he saw that 21…Rg2 could be met by 22.Rh2. Then he decided to be “more clever”, and play 21.Ra5?, only to realise after he left the board that 21…Rg2! was now simply picking up the f2-pawn (if 22.Rh2 the h4-pawn falls: 22...Rxh2 23.Nxh2 Bxh4). After 22.a4 Rxf2 23.h5 Mamedyarov was now considering whether to play for a win himself or to force a draw. His reflections weren’t entirely about chess:

Caruana had just 40 minutes for 20 moves, but then I realised I have to go to the dentist tomorrow, and a draw is good… My doctor has promised me tomorrow will be much better!

If his tournament goes well Shak has also promised to name his dentist. For the moment, though, nothing is going well for Fabiano, who summed up:

It’s unpleasant to lose in the first round [to Carlsen], but I just played one really awful move. Overall I didn’t play well in that game, but one move was kind of ridiculous. Today I did pretty much the same.

After playing 40 classical games against each other, including a World Championship match, the players have developed a healthy mutual respect. Sergey:

I started to feel that I’m a bit tired because I have studied so many games of his and I realised once again how great he is. We are both probably a bit tired of each other.

I would have wished for something more interesting, but it’s ok. It’s not like I have a habit of beating him with Black… or White, either! … Obviously I have a great amount of respect for him. I’m not trying to bamboozle him with anything too ridiculous. 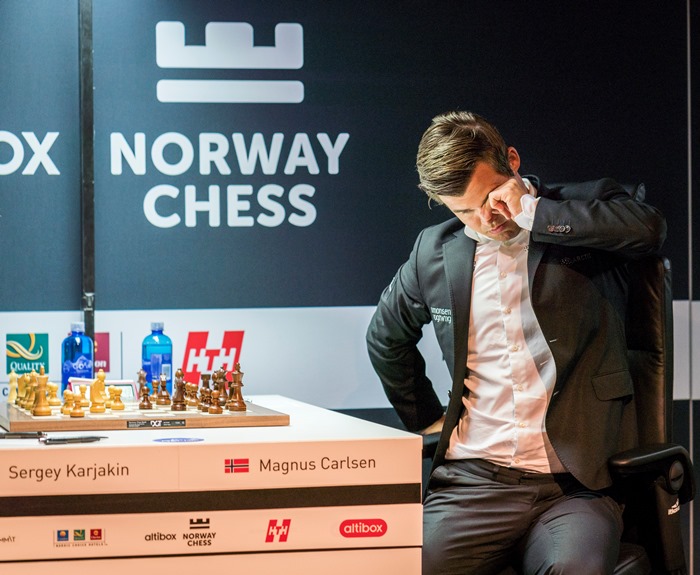 Tired of each other? | photo: Lennart Ootes, Altibox Norway Chess

Carlsen did manage to surprise his opponent with 5…Bc5 in the Ruy Lopez, though, and Karjakin decided to head for a line in which he expected White to have a small but safe advantage. In fact he’d already had the diagram position with White against Alexander Onischuk in Poikovsky in 2010, when after 14…Bf5 he’d achieved a comfortable advantage. Magnus was ready, though, with 14…Bg4!, temporarily giving up a pawn. Sergey played along with 15.Rxd6 only to be hit by the paradoxical 15…Bf5! only now:

Again Sergey didn’t immediately spot the point, but then he realised it was 16.Na3 Ne4! Magnus confirmed Svidler’s suspicion after the game, “It’s a computer idea, obviously”, and he credited his team with finding it. He didn’t want too much praise, though, since ultimately it was an opening idea that did no more than secure a draw. 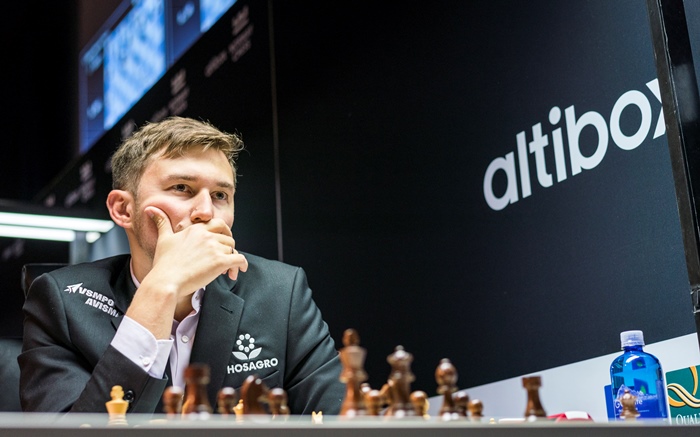 Svidler described the opening of this game as, “a sideline of the Grünfeld aimed specifically at fighting and getting a non-standard position where you can express yourself”. Maxime Vachier-Lagrave was under some pressure but found a nice regrouping of his pieces and finally sealed a draw with a flourish: 30…e4! Svidler again:

He could have started with 30…Rxd1, but I think the artiste in him felt like starting with 30…e4, even though it shouldn’t make any difference. It’s a nice touch.

Maxime later talked about how he’s calculating well and added, “I liked this 30…e4”. Two draws was a decent start for Maxime, given the uphill struggle his failure in the blitz tournament had given him:

Of course it wasn’t ideal to pick up five Blacks, and to have two Blacks in the first two rounds. I could only blame myself for that. 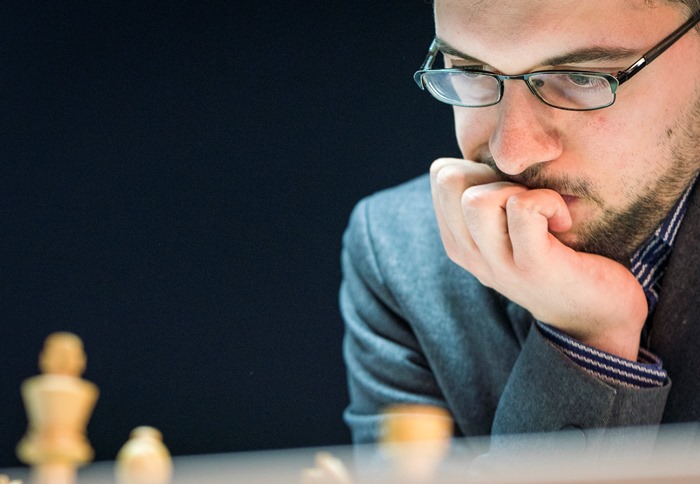 Ding Liren, meanwhile, notched up his 74th unbeaten classical game in a row.

This was a Catalan battle fought over nuances, with Levon commenting afterwards, “It all depends on the position after 17…Nd7, if there’s something for White or not.” It seems the answer is “not”, and after 18.Ne4 c5 19.Rb1 Qxd1 20.Rfxd1 Wesley played energetically to seal a draw. 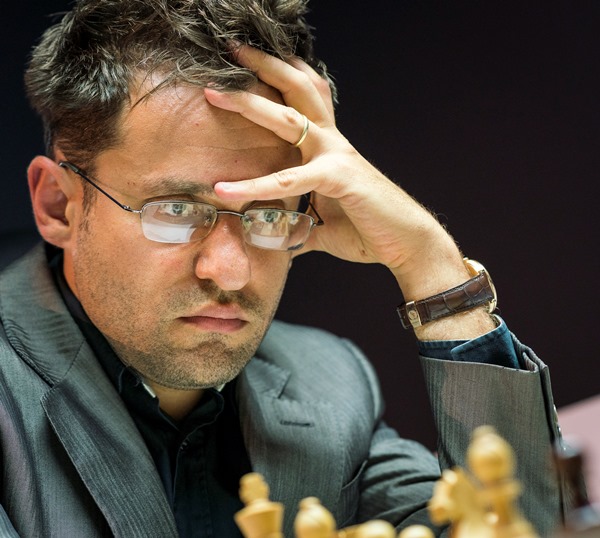 Anand admitted he was “confused a lot” by Nakamura’s 6.h3!?, which had never been tried by a strong player before. Vishy was able to base his play on analogous Queen’s Gambit Declined positions, but Hikaru was optimistic when he played 19.Nd2 – “It felt like I got more than I could hope for”. He called 19…Na4, hitting c3, a good move, though, and the last game of the day to finish did so with a draw by repetition in 39 moves, after barely 2 hours and 40 minutes. 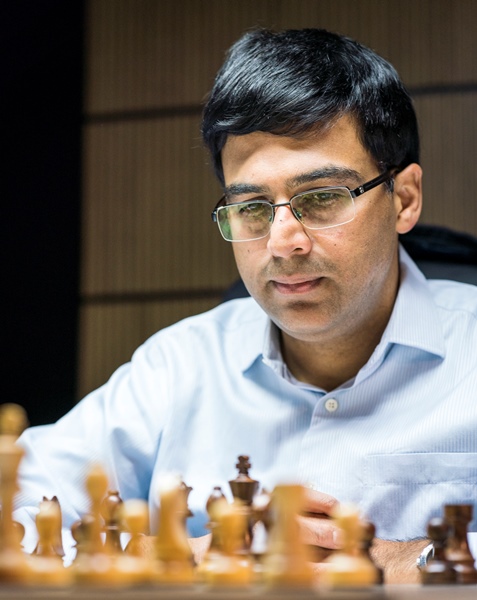 Vishy Anand now has White against Ding Liren and Wesley So, before he faces Black against Magnus Carlsen in Round 5 | photo: Lennart Ootes, Altibox Norway Chess

Perhaps the best of the live show was still to come, though. We’d had priceless information on who the Petrov Defence was based on… 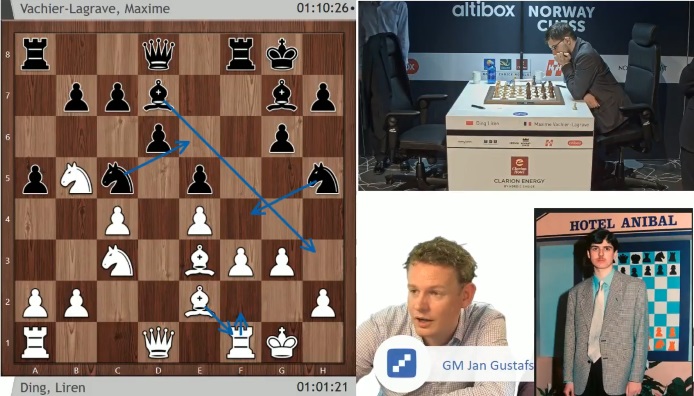 …before at the end of the show Jan Gustafsson helpfully lip-read the post-game conversation between Vishy and Hikaru (of course you can rewind to see the whole day’s show):

Round 3 on Wednesday is the last before the first rest day, and again there’s a lot to look forward to – the classic Carlsen-Aronian (can Magnus get revenge for his loss last year?), the likely tactical slugfest MVL-Caruana, the all-American battle So-Nakamura and also Anand-Ding Liren and Mamedyarov-Karjakin (for this one it might be worth betting on a draw!). 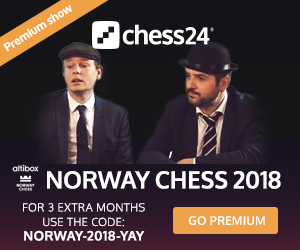