No horsing around as favourites reach Mr Dodgy Invitational semifinals

It’s Giri-Korobov and Svidler-Navara in today’s Mr Dodgy Invitational semifinals after the favourites all won in Saturday’s quarterfinals. There were big wins for Anton Korobov (7.5:2.5) over Peter Heine Nielsen and Anish Giri (7:3) over Laurent Fressinet, though not without a fight. The other matches were both decided only in Game 12. Peter Svidler was losing 4.5:2.5 to Nils Grandelius but hit back to win, while David Howell’s comeback wasn’t quite enough to win the battle of the Davids against Navara. 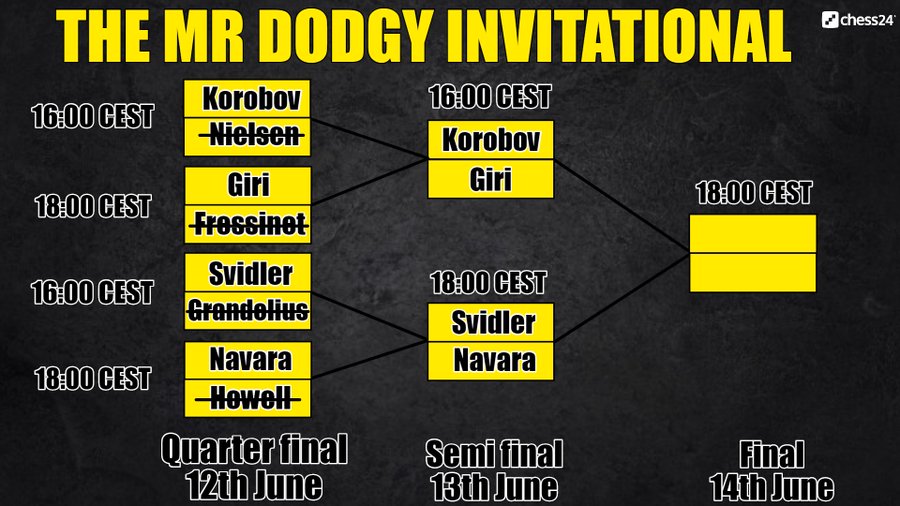 If there’s one man to blame for the Mr Dodgy Invitational it’s of course Mr Dodgy himself, who spent the morning of the launch locked in battle with the horses that inspired him:

He also joined Jan as the show began:

The Mr Dodgy Invitational had overcome many obstacles to get this far, and there was one last betrayal…

…but nothing could stop the event going ahead, with Jan Gustafsson leading the live commentary, joined by Laurent Fressinet, Anish Giri and other guests:

You can replay the games using the selector below:

It would be looking a gift horse in the mouth not to Go Premium with 40% off using the voucher code Dodgy!

Let’s take a brief look at the quarterfinal action:

Swedish no. 1 Nils Grandelius showed himself ready to do anything to win…

…but Peter claimed he wanted it more:

The first two games were drawn with Peter describing a “polite-off” where neither player would try to flag the opponent in drawish positions (the time control is 5 minutes with no increment), but it soon heated up, with wins traded and then Nils seizing a 4.5:2.5 lead. Peter decided that anything goes and was now unafraid to flag, but he also played some fine chess as he went on to win the next three games with the white pieces and claim victory in the match.

Nils was, of course, gracious in defeat, even if he felt sad about letting down the organising country Sweden!

Mr Dodgy got in the day’s worst joke, and there was plenty of competition…

The Peter situation had been perilous since Peter Heine Nielsen didn’t fare so well:

Rapid world no. 5 Anton Korobov is a beast at the chessboard, but Peter Heine Nielsen had been taking things seriously…

That showed in the first game when Peter, Magnus Carlsen’s coach, showed an interesting idea in the opening, obtained an overwhelmingly won position, then went on to spoil it and only draw. At least two more such incidents occurred, with a particular low point Game 5, where Peter not only missed a chance to give mate-in-4 with checks but then went on to lose on time in a completely won position:

Peter felt his opponent could have scored more points if he’d chosen to play on the clock, though he wasn’t sure if that was a sign of, “sportsmanship or the confidence not to flag me all the time... I wouldn’t be surprised if he has an extra gear, let’s put it like that”.

Nevertheless, even if Peter was at times, “to use the common expression – weak and slow” (his own words), he definitely had some moments. For instance, the one win:

Anton won the final three games, however, which was overkill, since officially the match had already ended with the score at 6.5:2.5!

In a format that hasn’t yet been officially FIDE certified this game featured Laurent Fressinet commentating in French while Anish Giri joined Jan Gustafsson in English commentary, even allowing Jan to suggest moves – Laurent reasoned that could only help his chances!

Already in Game 1 we had Anish asking Jan to ignore his game, though when things suddenly swung in his favour he wanted the world to know about it:

…but that would go on to be the Frenchman’s only win.

Laurent had to deal not only with the result but with backhanded compliments after the chess was over:

The battle of the Davids was won by Czech no. 1 David Navara, and it was very much a battle. Navara struck first, but Howell hit back to take the lead with wins in the next two games. From there on, however, the momentum swung decisively in Navara’s favour, as he won four games, in all of which Howell lost on time or was about to lose on time in the final position. The Englishman is famous for his time trouble, and in this case was also unfamiliar with the new chess24 Playzone (still in beta) that was being used for the match:

At 6:3 to Navara it looked all over, with Howell needing to score 3 wins in a row to force an Armageddon decider, but he came close! In the penultimate game, which had looked like being a crushing attacking win…

…he eventually won an endgame in 93 moves, by flagging his opponent! The Englishman then came very close in the final game, but Navara seized his moment at the end to win the game and match.

How else do you celebrate such a win but with a horsey photoshoot?

So it was all over for four of the players, though there was still the question of the consolation prizes:

In the end, everyone was a winner!

Some are more winners than others, however, and it’s now Korobov-Giri (16:00 CEST) and Svidler-Navara (18:00 CEST) in what are almost certainly the biggest matches anywhere this Saturday. They deserve a trailer, and that’s just what they got:

Tune into all the action live from 16:00 CEST right here on chess24!