Levon Aronian quipped,“generally I accept such things with humility and respect towards the chance, so I take it!” after Wesley So mouse-slipped away the first game of their quarterfinal. Levon survived an auto-queen scare to win 3:1, which was also the score as Shakhriyar Mamedyarov continued his sparkling form from the preliminaries against Alireza Firouzja. Hikaru Nakamura needed just one win to beat Liem Quang Le, while Carlsen-Radjabov is level after four draws, with Magnus saying he was just “happy to escape”. 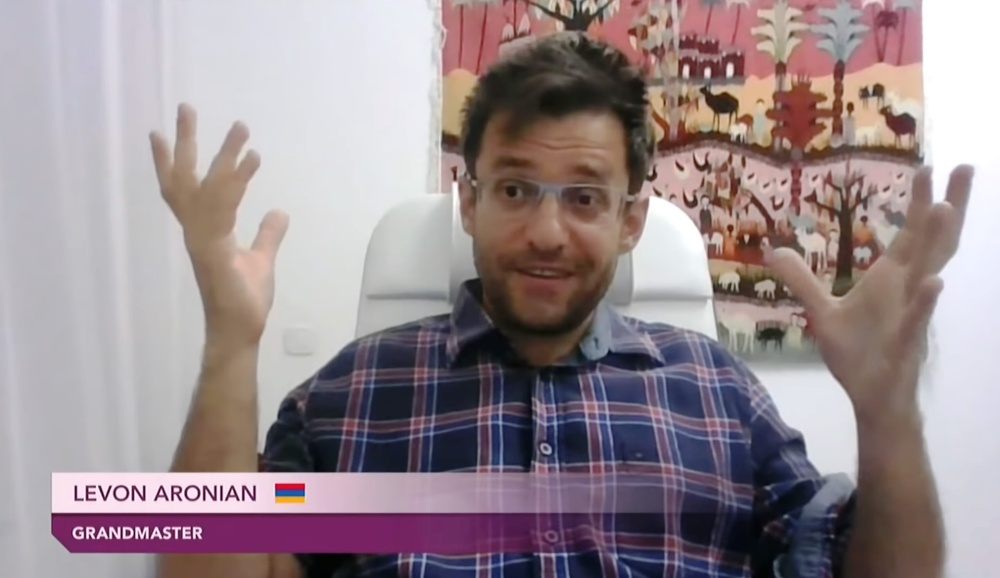 Levon Aronian was in fine form, off and on the board

You can replay all the games from the New in Chess Classic knockout stages using the selector below.

And from Simon Williams and Harikrishna.

Don't miss out on a special offer on the New in Chess magazine, and more deals, at chess24.com/deals.

Day 1 of the New in Chess Classic quarterfinals left three players needing to win on demand on Day 2. 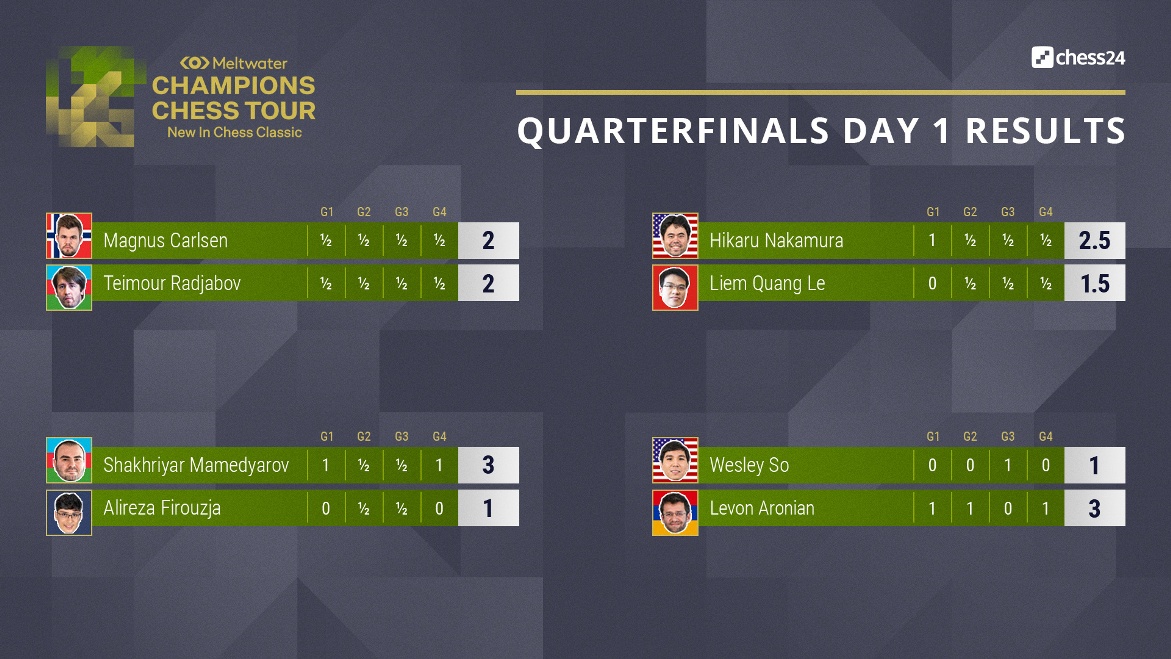 Meltwater Champions Chess Tour leader Wesley So has been unrecognisable so far in this event, with the usually hyper-solid American starting with three losses in his first four games of the preliminaries. He started the knockout in similarly unfortunate fashion, with 20.Re2?? clearly a mouse-slip.

Wesley struggled on for a few moves after Levon Aronian took the rook, but it was hopeless. Levon would later comment:

Honestly speaking, of course, I got very lucky in the first game. It was a mouse-slip on his part, which is of course a bit disappointing, because sometimes it’s so natural the game that you feel you’re playing a tournament, and then the mouse gets in the way… Generally I accept such things with humility and respect towards the chance, so I take it!

That meant Wesley had to push for a win, but in the second game that backfired, so that Levon was winning completely when another archetypal online chess situation occurred on move 33. The winning move was to under-promote to a knight, with check, while in this case it wasn’t just that promoting to a queen was a bad move - it would lose to mate-in-1 with 33…Qg5# How sure was Levon that he didn’t have auto-queen selected?

He later revealed it cost him valuable time trying to figure out if he’d selected auto-queen.

I think I spent about 25 seconds trying to remember, then I went to the options, I didn’t see the option, and I was like, ok, whatever, if I’m destined to lose like that, let it happen!

He made the knight move, however, went on to win the game, and although Wesley hit back to win the third game in some style, the US Champion was unable to win a second game on demand and will now have to come back and win on Day 2 to force playoffs.

Levon was also asked about Ian Nepomniachtchi winning the Candidates and the chances the Russian now has in a World Championship match against Magnus.

He’s the type of a guy who wins games and is very dangerous with different time formats. So I think at the moment Fabi probably still has the better chances of beating Magnus, but I think Ian also has very good chances, because he’s diligent and he cannot be bullied. That’s a big advantage. Magnus normally bullies a lot of people, but Ian is not easily bullied!

Magnus Carlsen himself came close to getting bullied against Teimour Radjabov in the New in Chess Classic quarterfinals. He admitted afterwards he was only relatively happy with his first game, while in Game 2 he was a pawn down and hanging by a thread until 44.Be8 (and some inaccuracies preceding it) allowed him to survive.

The pawn can’t be defended, but it turns out the forced 44…h4! is just enough, and after 45.gxh4 Magnus managed to exchange rooks and hunt the weak f4 and h2-pawns down with his bishop.

Overall I think I had a complete off-day today and I have to say that he also played well, without a lot of mistakes. He probably didn’t push as much as he could have, but I was just completely, just way, way off today.

Magnus was so off that he was wrong about a chess fact, when he claimed this was his first day of all-four draws. He’d also managed it on Day 2 of the Skilling Open quarterfinals against Anish Giri, but in that case the draws were enough for him to win the match.

One of the most anticipated match-ups was Mamedyarov-Firouzja, featuring two tactical wizards. On this occasion, however, it was Shakhriyar who had the upper hand, continuing the fine form that had seen him score the most wins in the preliminary stage. He eased to a win in the first game and should have wrapped up the match in Game 3 after landing a fine tactical blow. 30…Nxd6? was an unfortunate pawn grab by Alireza.

31.Nf6+! gxf6 32.Qg4+! Kh8 33.Rxd7 won an exchange while leaving Black’s king horribly exposed, but it was testament to Alireza's phenomenal trickery that he managed to escape and draw the game.

The 17-year-old still needed to win on demand in the fourth game but was this time completely shut out by Mamedyarov, who went on to win and clinch the mini-match.

In the final match Hikaru Nakamura kept the chess drama to a minimum as he won a pawn against Liem Quang Le in the first game, converted his advantage, and then drew the remaining three games.

That means Le, So and Firouzja must all win on Wednesday to force a blitz playoff for a place in the semi-finals, while it’s all square in Carlsen-Radjabov. 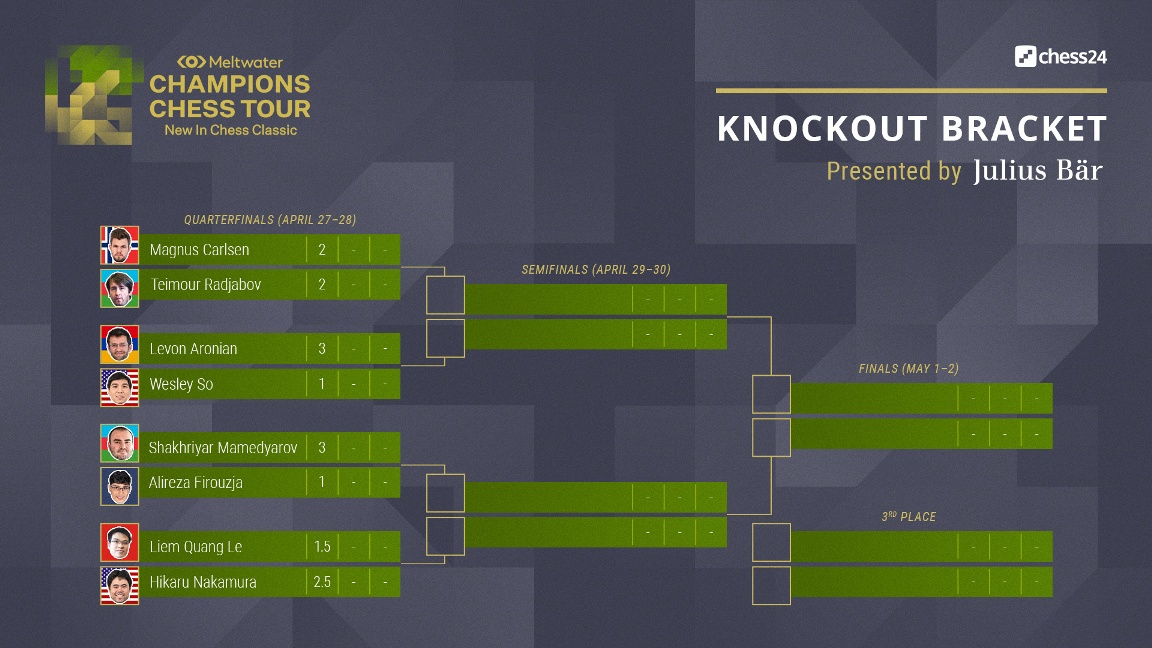 Tune into all the action here on chess24 from 19:00 CEST, with Kaja, Jovanka and David in Oslo, or Simon and Hari.

Also, advance warning that on Thursday 29 April we’ll have Peter Leko and Tania Sachdev returning for the semi-finals and final! Peter was a second of Ian Nepomniachtchi’s for the Candidates and we’re excited to have a Candidates Special from 18:00 CEST.

If you have any questions for Peter you can submit them in the comments below, or on Twitter with the hashtag #AskPeter - there’s going to be another chance tomorrow!