“Somewhat solid” was how Ian Nepomniachtchi summed up his play after he beat Alexander Grischuk in the second tiebreak game to take first place in Moscow and claim 9 Grand Prix points. Despite the disappointment of losing, Grischuk described the event as his “best tournament in terms of quality in a very long period,” as he singled out his earlier victory over Hikaru Nakamura as one of the three games he could be most proud of in his career. His 7 points leave him well-placed to qualify if he can score well in his remaining two Grand Prix events. 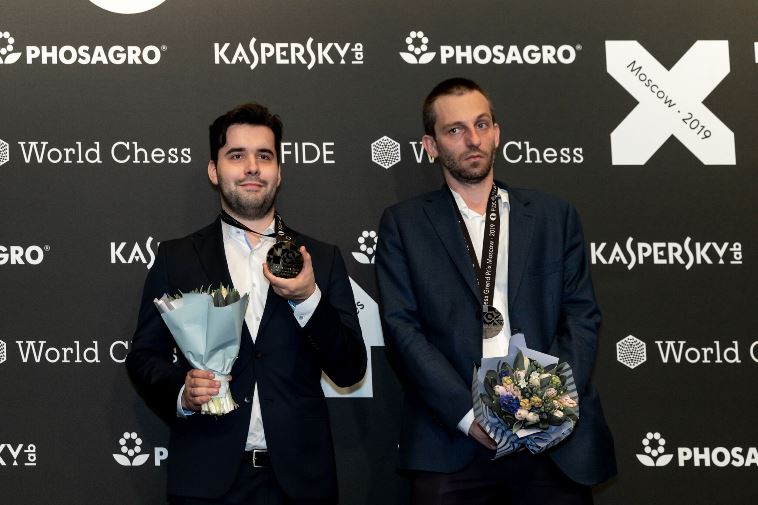 Knockouts are all about winners and losers, and the final was no different | photo: Niki Riga, World Chess

And here’s the commentary on the final day’s action from Evgeny Miroshnichenko and Daniil Yuffa:

The Moscow FIDE Grand Prix has been very unusual for a knockout tournament. The surprises started in Round 1, when only two of eight match-ups went to tiebreaks. There were more tiebreaks in subsequent rounds, but only once in the whole event did a match go as far as 10-minute games (Nepomniachtchi’s semifinal against Wojtaszek), and only once did a player mount a comeback after losing a game – Wesley So in the first round against Jan-Krzysztof Duda. We never got to see either blitz games or Armageddon. 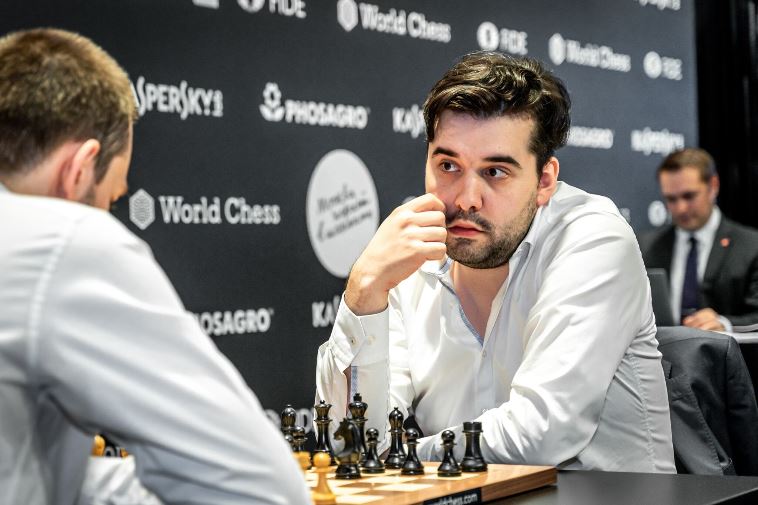 That pattern continued in the final, with the last day’s play ending as soon as it possibly could. The first 25-minute tiebreak game was notable early on for Nepo meeting 1.e4 e5 2.Nf3 with 2…Nf6, the Petroff, or Russian Defence:

That had Grischuk in a 4-minute think on move 3, but at least he justified that investment of time with an offbeat line, picking the 5th most popular option in the position, 3.d3!? If anyone was better it was White, with Alexander seeing it as the high point of his match:

The only game I was better was when I played d3 on the 3rd move - the only game when I was slightly pressing. 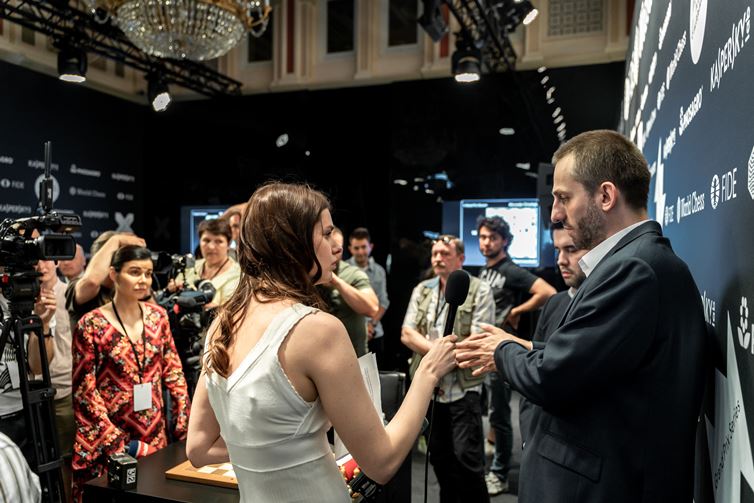 Grischuk and Nepomniachtchi are interviewed by Eteri Kublashvili after the match | photo: Niki Riga, World Chess

It all came to nothing, though, which you couldn’t say about the Giuoco Piano Ian Nepomniachtchi played in the next game.

Game 2: Nepomniachtchi 1-0 Grischuk | Not so piano

The likes of Carlsen, Anand and Aronian had rerouted the knight to g3 via f1. After thinking for over 6 minutes Grischuk continued as in previous games with 14…d5!?, but both players questioned that move afterwards. Play continued 15.exd5 Qxd5 16.Ne3 Qd7 17.Nc4 Qd5 18.Ne3 Qd7 and then, having dangled the prospect of a draw in front of his opponent, Nepo cruelly snatched it away with 19.b5! After 19…Na5 it was clear something had gone wrong for Black:

The knight on the rim was already dim, but it would get much dimmer in the space of 10 moves. Grischuk commented:

It was very stupid. I was trying to avoid slightly worse positions and I allowed just a completely winning position for White. 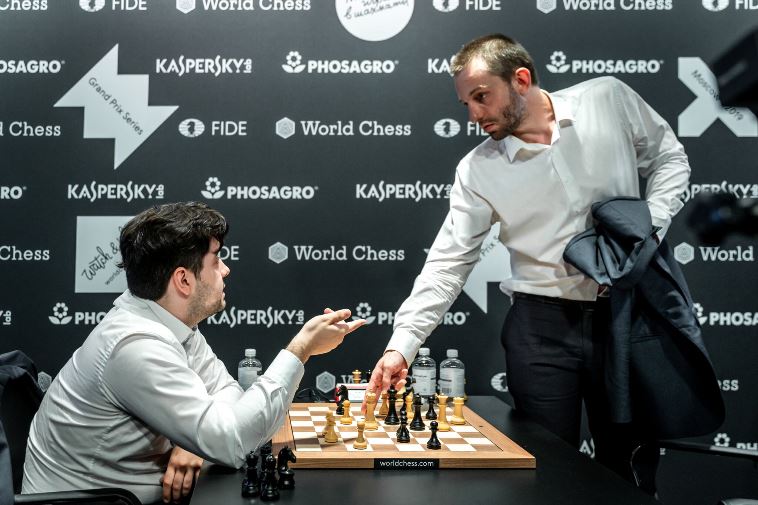 It would be a game where it was by no means easy to pinpoint exactly where Black went wrong | photo: Niki Riga, World Chess

Though it was perhaps more accurate when he noted his play was, “not completely terrible either - the last game it was like the chain of a slight problem here, and then it goes on, and on…”. In any case, the position after 29.c6 was painful to behold:

The knight has nowhere to go and White could win material with Bd2-Bxa5, but Nepomniachtchi went on to pick the equally simple but even more crushing plan of Rb4 and Rxd4. The final move was a fitting conclusion to the tournament: 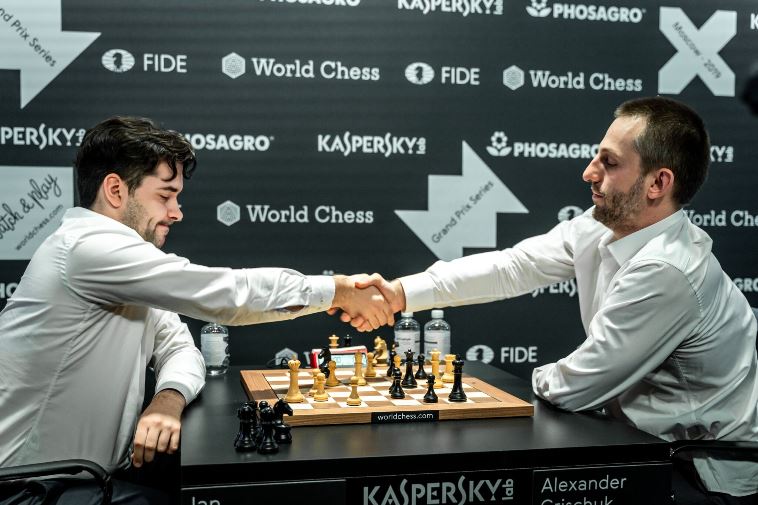 The match and tournament were over | photo: Niki Riga, World Chess

You can watch the players talking about the game afterwards below:

Nepomniachtchi, the only player to attend the pre-tournament press conference, had mentioned that he wasn’t in favour of the knockout format for the Grand Prix. Despite then going on to win it, he hadn’t changed his mind:

In my opinion the whole system makes some harm to the quality of play, because sometimes you want to take a less risky decision, to not take any extra risks and play safely, and somehow you are missing the best continuations which are connected with some serious play, and especially the tiebreak it’s very tough…

And on his own play:

For me it’s actually the opposite. I think a knockout is the best format for me, I usually play best in knockouts, and I think anyway probably it was my best tournament in terms of quality in a very long period, and if I won today of course I would be happy, but you cannot be happy when you lose… 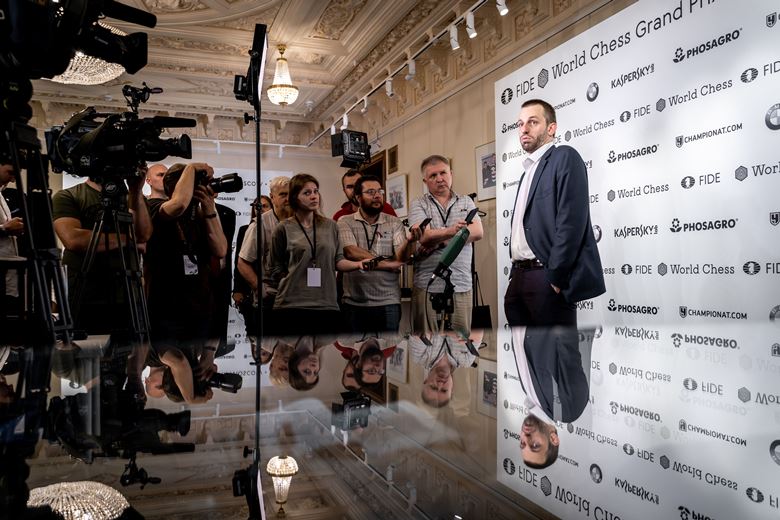 Grischuk felt he’d added a game to his greatest hits:

You can check out that greatest games collection below:

Grischuk had another reason to be satisfied, which was that after winning two matches without needing tiebreaks (= two bonus points) he’d scored only two points less than Nepomniachtchi. Here are the early Grand Prix standings:

There’s a long way to go, as each player takes part in three of the four Grand Prix events, with the next in Riga on July 11-25. There’s a lot of chess coming up before that, of course, with the Women’s Candidates Tournament starting in Kazan, Russia on Friday, while the blitz opening tournament of Altibox Norway Chess is on Monday!