As city blitz championships go, you'd be hard pressed to find anywhere stronger than Moscow. The 20-player round-robin tournament featured 17 GMs, including three 2700+ stars. Ian Nepomniachtchi took the top spot, finishing with 14 points, a half point ahead of Dmitry Andreikin.

Ian (fun fact: his surname means "he who forgets"!) lost to Andreikin in their individual game (3:45:50 in the video below), but posted an impressive 13 wins, 2 draws and 4 losses, including beating other top seeds Alexander Morozevich and Boris Savchenko along the way. 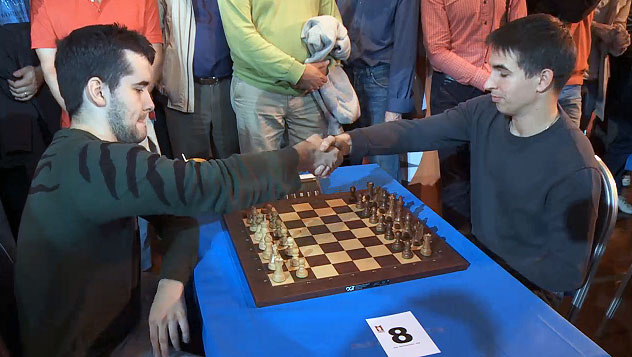 Nepomniachtchi and Andreikin at the start of round 13 | Screenshot: ChessCast

Nepomniachtchi was ranked number four in the blitz world rankings going into the event, and has previously finished in clear second place in the World Blitz Championship in 2013 (behind Shakhriyar Mamedyarov), so he's no slouch at this format, but this was the first time he has won the Moscow Blitz.

Against Andreikin's Taimanov Sicilian in round 13, Nepomniachtchi played an early 6.Nxc6, and went for a line which is not considered critical (although GM Robin van Kampen avoids it in his Taimanov repertoire) but was played in May in the game Alexandr Predke vs. Boris Grachev, Russian Team Championship.

After 37 moves the players reached the following position. (Try "play this position" in the game menu below the A1 square to see just how hard it is to defend!) Andreikin finally got his central pawns rolling with the breakthrough 37...g4!:

Kateryna Lagno was the only woman to participate in the overall championship. Her loss to Nepomniachtchi featured some nice geometric themes, after 31.Ba5 from Nepomniachtchi:

Nepomniachtchi vs. Lagno, Round 6, position after 31.Ba5

The pin along the 6th rank allows White to push b6 next, and soon b7 and b8=Q thereafter! 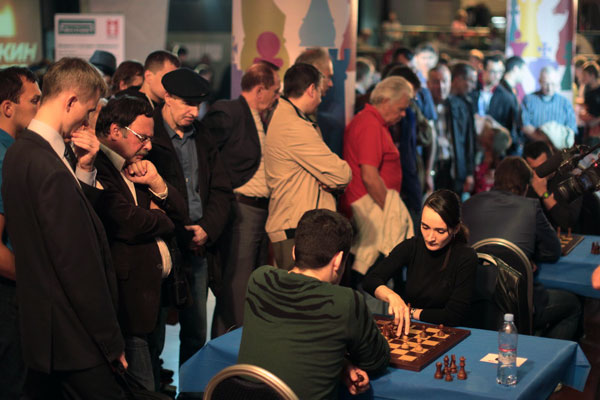 A separate Women's tournament was dominated by Valentina Gunina, who out-rated the nearest opposition by 180 points and won by a full 3 point margin.

You can download a PGN (see the blue download link) or replay all the games from our Live Tournaments:

You may notice a curious outlier in the games list: American GM Alexander Onischuk, who stopped by Moscow en route to the World Cup in Baku.

He noted that it was his first time playing in a blitz tournament with so many rounds, which can lead to unpredictable swings, but that the tournament on the whole ran quite smoothly.

It is amazing how quickly the situation in these tournaments can change. One guy can have a 2 point lead and three rounds later he is not even at the first place. 190 games and no single scandal. I thought it is pretty remarkable.

All 6 hours of blitz action can be replayed in glorious HD video below:

Finally, if you're still reading this far, you definitely deserve to take a glance at video of the kitchy opening ceremony with it's tap-dancing number set to New York, New York!