Ian Nepomniachtchi has won the Levitov Chess Week after finishing tied on 5/7 with Alexander Grischuk but taking first prize for winning their head-to-head clash. Anish Giri ensured the final day went down to the wire as he beat Nepo in the first game and then retained theoretical chances of winning it all himself until a draw was agreed on move 68 of his final game against Boris Gelfand. Boris finished on 50% with Vishy Anand, above fellow “veterans” Vladimir Kramnik, Peter Svidler and Evgeny Bareev. 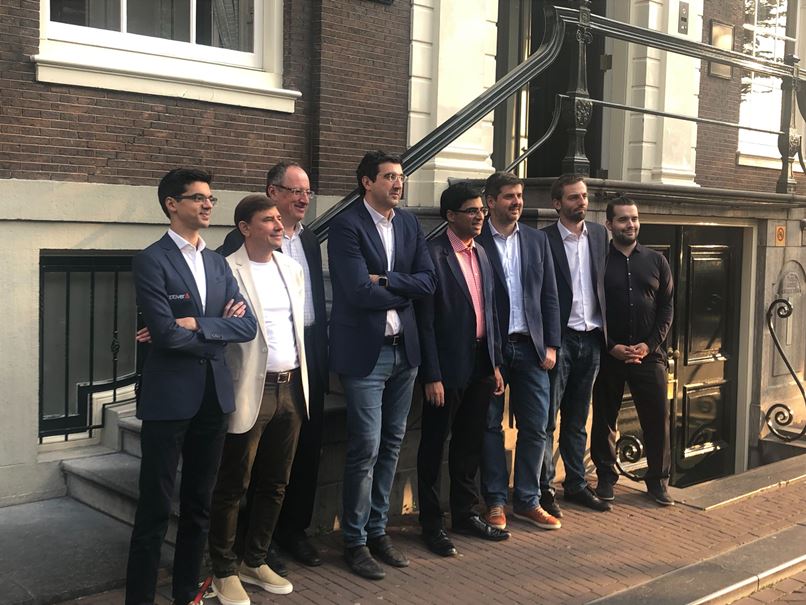 A group portrait outside the hotel | photo: Jan Gustafsson 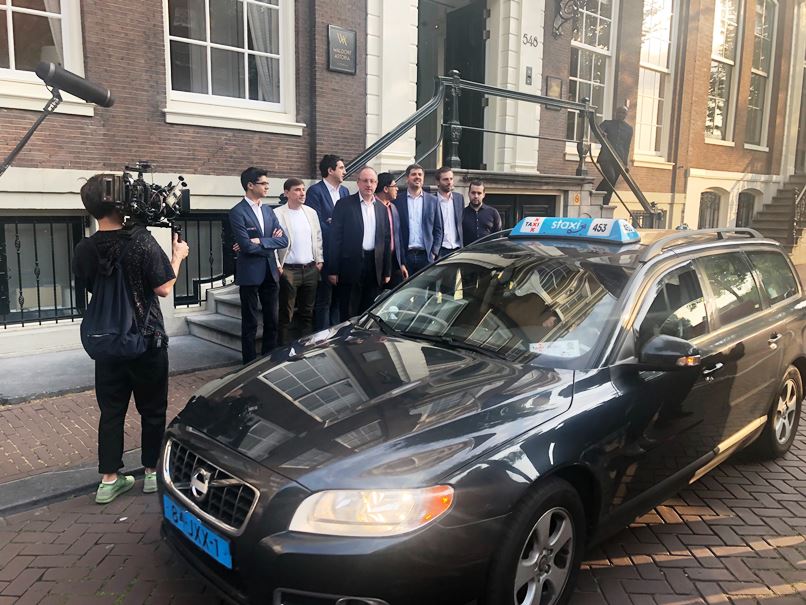 The moment before the fight for the first taxi began... | photo: Jan Gustafsson

You can replay all the action from the Levitov Chess Week rapid tournament using the selector below – click a result to open that game with computer analysis, or hover over a player to see all his results:

A bloody penultimate round

An earlier version of this report began by explaining that the schedule prevented Peter Svidler from recording a final recap video, so “we can only imagine his self-deprecating description of the debacle he suffered at the hands of Vladimir Kramnik”. Fortunately, though, he managed to film one when he got back to St. Petersburg instead! He goes through all eight games played on the final day, and you don’t want to miss it:

There was, of course, self-deprecation:

Each day I lost a game with White that is instantly printable and can be broken apart for diagrams… A very nice example of how to beat up on unsuspecting opponents – a useful public service provided by me in this tournament! Not one I enjoyed greatly, but still quite useful.

And we can’t resist adding the diagrams. Peter was relatively happy in the position he got with doubled f-pawns, pointing out he’d won a very similar game against Jan-Krzysztof Duda in the World Blitz Championship. Then he went for 16.a3?

Svidler explains the main threat is to follow Bd6 with Qg5, Qf4 and mate on h2

Peter takes up the story:

I played 16.a3, got up from the board, and Vladimir looked at me quizzically, thought for another maybe couple of minutes, and just played 16.Bd6!! here, and I sat down and I thought, “ok, I missed this, but this cannot possibly be too bad. I mean how bad can it be? I missed one tactic, and my previous moves appeared to be quite logical – yes risky, but still quite logical.” And then I spent something like 10 minutes here looking for a move, and I realised my position is pretty much lost. It’s not even worse, it’s very, very difficult to continue the game. 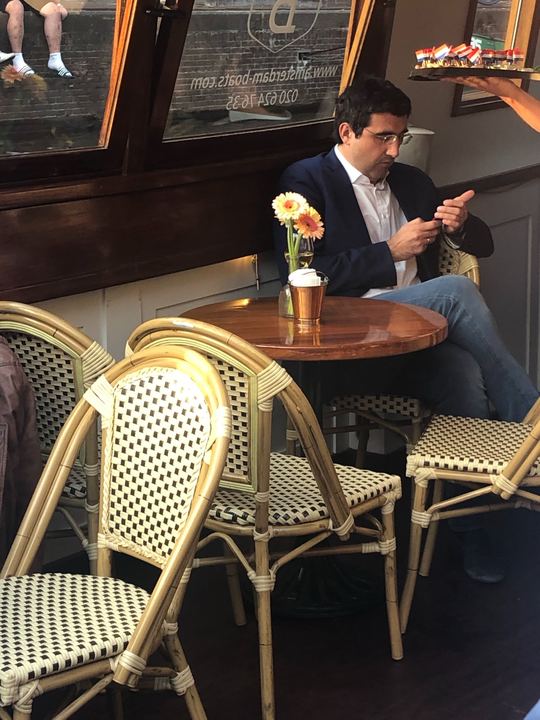 It was the kind of game that might make Vladimir Kramnik consider a comeback, but that win was sandwiched between four losses | photo: Jan Gustafsson

There was competition for the most resounding win of the round as Evgeny Bareev crashed through to get his first win and knock Boris Gelfand out of contention. Vishy Anand, meanwhile, was still right in contention, just half a point behind the leader Nepomniachtchi, but the queen sac he got to play against Alexander Grischuk brought little joy.

37…Qxd3. Of course if White recaptured 38…Ne1+ would leave Vishy a piece up, but after 38.Qb7+ Kh6 39.Qxf3 Grischuk eventually converted his extra pawn.

That meant Ian Nepomniachtchi had the chance to take a full-point lead into the final round, but instead he was convincingly beaten by Anish Giri in a game that, to the untrained eye, started like a bullet game where White made a bad pre-move and allowed Black to exchange queens early on! Svidler points out getting playable positions with very early queen trades is now a trend in chess, however, while he also revealed another trend – that top players are starting to use Leela Zero… 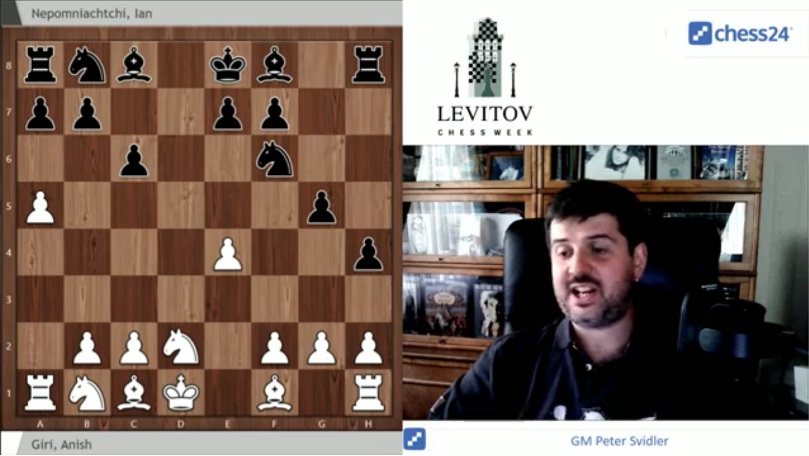 Svidler pointed out this line shown by Leela Zero was quintessential Alpha/Leela Zero style - both sides just push their rook pawns up the board!

Giri managed to seize control, threatened to give mate and then cynically won a knight instead to inflict the first defeat of the event on Nepomniachtchi. That meant that both Giri and Grischuk had caught Nepo in the standings before the final round.

The day got better for Svidler as he ended on a high by beating Anand with the Najdorf, making it three losses in a row for the 5-time World Champion. After a great performance in Paris, and a good couple of days in Amsterdam, the wheels had come off at the end for Vishy, but there was no great harm done. 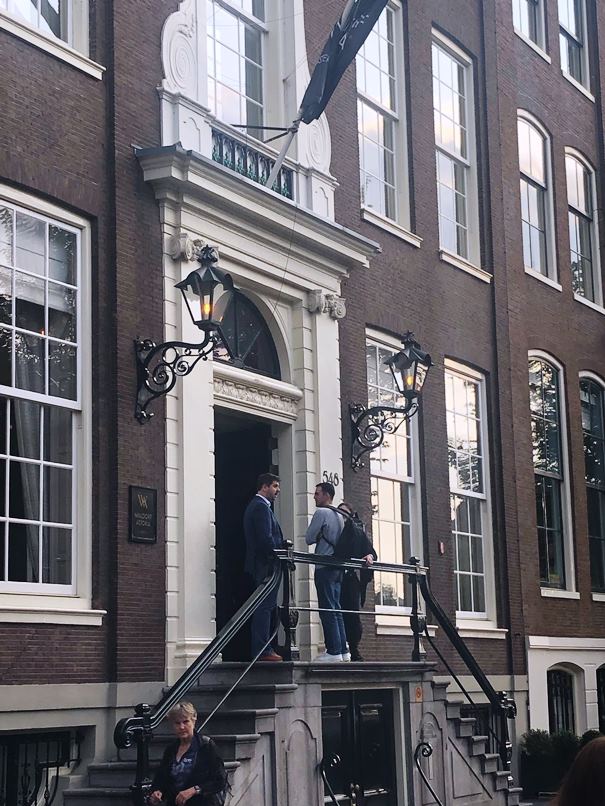 In a just world this would be Peter Svidler's house | photo: Jan Gustafsson

Meanwhile Vladimir Kramnik, Peter’s tormentor in the previous round, got a taste of his own medicine as this time he was the one facing the Nd3-blow:

The piece sacrifice 16…Nxd3+! 17.Ke2 Nhf4+! 18.exf4 Nxf4+ wasn’t terminal, but it was a turn of events that Alexander Grischuk welcomed. The Russian went on to get a win that threw down the gauntlet to Ian Nepomniachtchi and Anish Giri before the final session of the day.

Nepo was facing a newly enthused Evgeny Bareev, who, “perhaps inspired by his brilliant sacrificial victory against Gelfand in the previous round” (Svidler), gave up a pawn in order to launch another onslaught:

That still wasn’t quite all for the tournament, since Giri, who beat Nepo and drew with Grischuk, would have the better tiebreaker if he tied for first place by beating Boris Gelfand. Instead he was defending for almost all of the game before a draw was agreed on move 68. 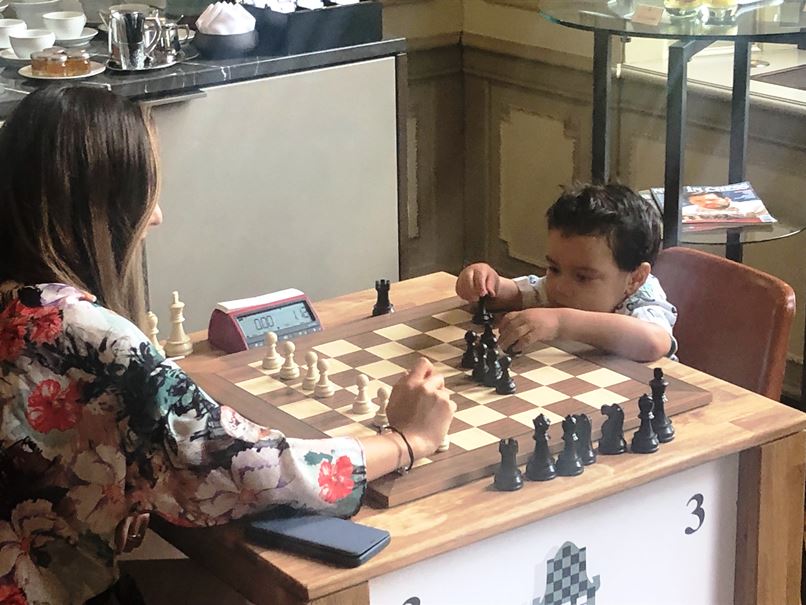 So that meant Ian Nepomniachtchi had partly made up for a tough end in Paris by winning the inaugural Levitov Chess Week, with Grischuk second and Giri third: 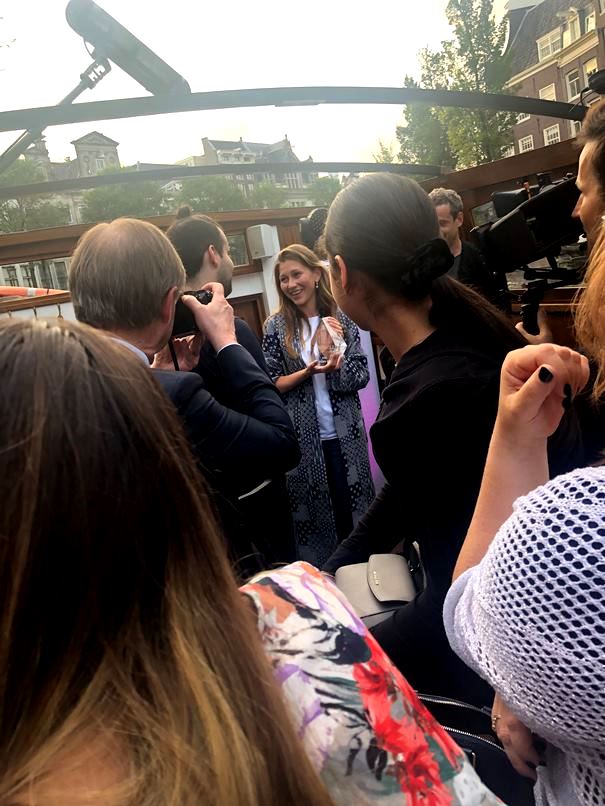 One Ian received his prize, Dirk Jan was perfectly placed to snap the photo, while our Jan is yet to fully master the dark arts of pushing your way to the front :) | photo: Jan Gustafsson

Let’s hope it will be back next year and won’t have to wait for Ilya Levitov’s 50th birthday!

Meanwhile there’s not long to wait until the world’s very best are back in action – in fact the Top 3, Magnus Carlsen, Fabiano Caruana and Ding Liren all play in the St. Louis Rapid and Blitz that starts this Saturday.