Europe had one foot in the final of the FIDE Chess.com Online Nations Cup after beating the USA in the penultimate round, but they were thwarted by bottom-placed Rest of the World in the final round after Alireza Firouzja took down Levon Aronian. The USA’s task against runaway leaders China looked tough, but Fabiano Caruana and Wesley So won on demand to seal a 2.5:1.5 match victory. China’s finishing top of the table still means they only need a draw in Sunday’s final to take the trophy. 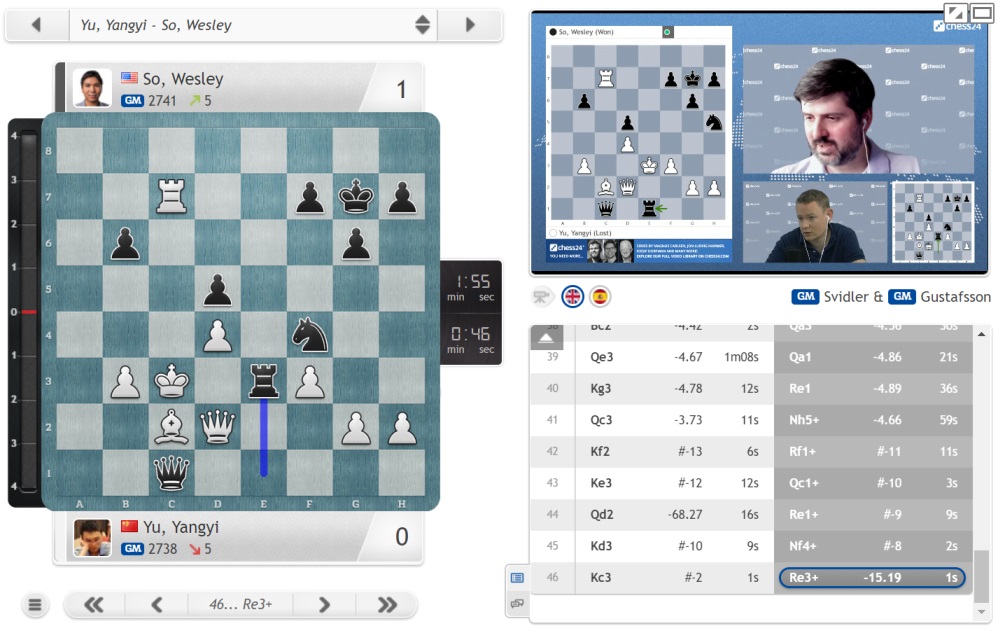 Wesley So was the hero as he took down Yu Yangyi to seal a place in the final for China - he could easily face the same opponent tomorrow!

Round 9: Europe seal a place in the final?

There was one match that mattered in the penultimate round, and it turned into a second victory of the tournament for Europe against the USA. Anish Giri was back and duly drew a solid game against Wesley So, while Caruana-Aronian and Nakamura-MVL were also draws but should perhaps have finished one win apiece. After a dicey opening Fabiano was much better against Levon, while Maxime really should have beaten Hikaru:

That miss didn’t matter in terms of the match result, however, since Nana Dzagnidze managed to outplay Irina Krush in a 4-rook endgame and seal victory for Europe. 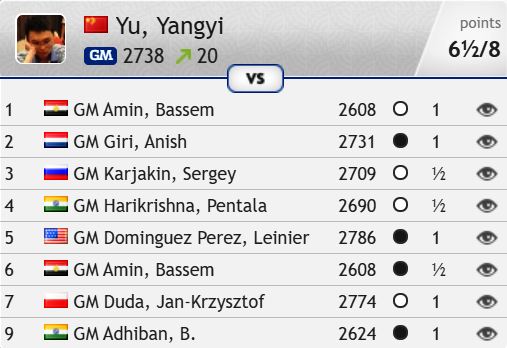 In the other matches Yu Yangyi moved to a phenomenal 6.5/8 by beating Adhiban as China defeated India, while Russia vs. the Rest of the World saw a highly enjoyable exchange of blows. Teimour Radjabov won a first game of the event, against Vladislav Artemiev, but it was Alireza Firouzja who stole the show with his attack against 2016 World Championship Challenger Sergey Karjakin. 37…g4! left Sergey a very narrow path to survival:

Karjakin resigned. 40…Rg1+ is a deadly threat, and after 40.Qxh2 Rh4 the white queen has run out of options. That wasn’t enough for the Rest of the World to get only their 2nd win of the tournament, since Dmitry Andreikin and Olga Girya hit back on the bottom boards.

Round 10: USA sneak into the final

So Europe had a 1-point lead and were playing bottom-placed Rest of the World, while the USA took on runaway leaders China. All Europe needed to do was get the same match result as the USA to make the final, but it turned out that was easier said than done!

After 4 draws and 2 losses on the first 4 days, 16-year-old Alireza Firouzja suddenly caught fire after beating Vidit in Round 7. He then beat Karjakin in style (as we've seen), and must have been even more full of confidence than usual when he took on Levon Aronian in the final round. Still, when queens were exchanged there was little to predict the crush that followed. Out of almost nowhere, however, Alireza whipped up activity against the black king, until all he needed was to be extremely methodical to clinch victory:

Jan-Krzysztof Duda rescued a draw for Europe, but that meant the USA could make the final by beating China, which is just what they did! Fabiano Caruana may have wished he’d played 12.Bf4 against Wang Hao’s Petroff in the Candidates Tournament, since in Yekaterinburg after 12.Kb1 he had to struggle for a draw. This time he had a clear win after 14 moves!

That might not have been enough, since Ding Liren beat Hikaru Nakamura on top board, but Wesley So pulled off the result of the day by defeating China’s star player, Yu Yangyi. Not only that, but he did it on the black side of the notoriously drawish 5.Re1 Berlin Defence. Yu Yangyi went for some unnecessary adventures:

…but the black pieces eventually broke into the white camp until they were all working perfectly in unison. Here’s the position after 46.Kc3:

It’s a curiosity that 46…Qa1+ 47.Kb4 Qa5# is a completely forced mate-in-2, but you could argue, as our commentators did, that 46…Re3+ was even better, since that queen-winning move provoked immediate resignation. The USA had done it!

Russia’s 2.5:1.5 victory over India was academic, but the end of Artemiev-Vidit was memorable. 21…Nxd4 doesn’t work against the most prosaic of replies, but Vladislav came up with something far from prosaic:

Artemiev had played all 10 games for Russia and despite 2 losses had also scored 4 wins to make him Russia’s most effective player. For Vidit it was a 5th loss in 8 games:

So the double round-robin concluded with the following standings:

As you can see, despite losing both matches to Europe, the USA qualified for the final on the first tiebreak of having score an extra half board point in their matches. That means it’s China-USA in Sunday’s final, which starts one hour later than usual at 16:00 CEST.

The teams have won one match each during the regular tournament, but despite today’s result China must be the favourites. That’s not just because they outscored the USA but because as the higher finishers in the round-robin they get draw odds – if the match finishes 2:2 they’ll be declared the champions.

Don’t miss the final day’s action when Jan Gustafsson and Peter Svidler may be joined by some guests!