Yu Yangyi hit an impressive 5.5/7 as he beat Europe’s Jan-Krzysztof Duda on the way to sealing China’s place in Sunday’s final of the FIDE chess.com Online Nations Cup. Russia’s slim chances of reaching the final ended as Ian Nepomniachtchi suffered a 5th loss in 6 games, this time to Hikaru Nakamura. The USA team are in second place, one point ahead of Europe, with the teams meeting in a crucial decider in Round 9. Magnus Carlsen joined Jan Gustafsson and Peter Svidler during the live show. 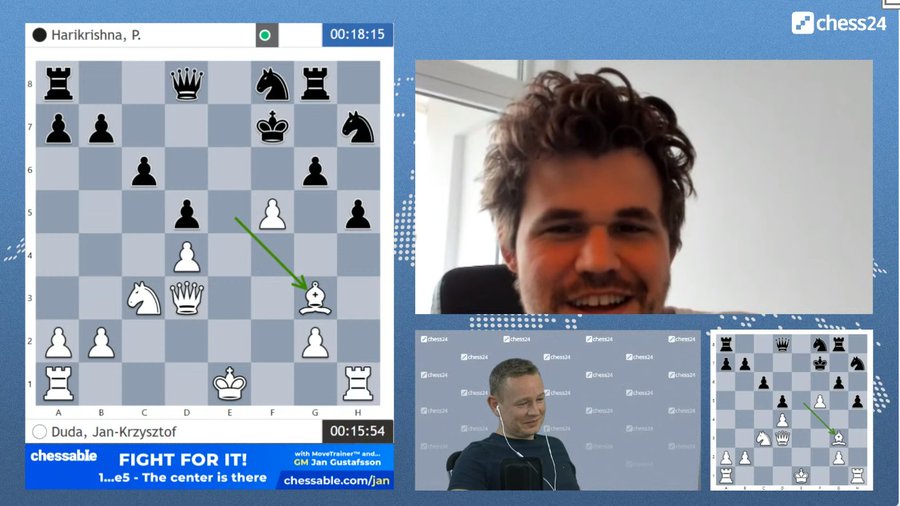 You can replay the day’s live commentary below:

Europe could have caught China with a win, but instead it was as close to a massacre as you could get with a score of only 2.5:1.5. Star performer Yu Yangyi, who later drew praise from Magnus Carlsen, followed up wins over Bassem Amin, Anish Giri and Leinier Dominguez by putting Jan-Krzysztof Duda to the sword. It was over as a contest long before the final blow 34.Bg7+!

Duda resigned, since after 34…Kxg7 35.Ne6+! and any king move White gives mate with 36.Qh4# Yu Yangyi had earned the rest he was given for the final match of the day.

It could easily have been a 3.5:0.5 scoreline, however, since two of Europe’s star players needed to be at their best just to survive. Here’s MVL against Ding Liren:

The USA took advantage of that slip by their key rivals Europe by beating Russia, with the single win coming for Hikaru Nakamura against Ian Nepomniachtchi. It had looked to be a drawish ending, but nothing has been going right lately for Nepo in online chess.

India vs. the Rest of the World was the match between the tournament’s strugglers, both individually and as teams. Teimour Radjabov has been having a tough tournament, but has a long-term plan:

His short-term plan was to return to his first love, the King’s Indian Defence:

Alas, all it gave him was a tricky ending, which he went on to lose to Vishy Anand. The Indian team secured their first victory of the event since Harikrishna also won, and the move that finished off Jorge Cori was a corker!

There was another first – Alireza Firouzja followed 4 draws and 2 losses with a first win after turning around a difficult position against Vidit. That made it 0.5/5 for Vidit, but better news was just around the corner.

Let’s take a break between rounds for the next instalment in the Carlsen-Svidler Banter Blitz Challenge. Magnus (who as a Steinitz Memorial player had the 1st World Chess Champion on his mind) hadn’t apologised for his h5 humiliation of Peter the day before…

Could Peter get revenge?

We mentioned Vidit’s 0.5/5 score, but he picked a great moment to show some of his real strength by beating Levon Aronian in an ending, as India took the lead against Europe. With Humpy Koneru doing very well against Anna Muzychuk and Harikrishna better against Duda it seemed as though India were going to put a big dent in Europe’s hopes, but the women’s board was drawn and Duda recovered from his loss the round before to beat Harikrishna.

Europe had rescued a 2:2 draw and a crucial match point, but one player could only watch from the sidelines. Anish Giri has played three games, drawing one and losing two, and played no part on Friday.

USA edged ahead of Europe by beating the Rest of the World 3:1 thanks to wins for Wesley So and Fabiano Caruana, but Bassem Amin came close to completely bamboozling not only Fabi but most observers when he played the exchange sac (mouse slip!?) 18…Ra5!?:

Magnus would later label Fabi’s 26.g5 “disgusting”. Objectively 27.f4 was worse, but Bassem missed a vital detail and was hit by an exchange sac in return:

Meanwhile China looked on the verge of a first defeat with Wang Hao in deep trouble against Vladislav Artemiev, but when the young Russian delayed pushing his passed pawn too long Wang Hao managed to salvage a draw. To add insult to injury China went on to win the match, as women’s no. 1 Hou Yifan moved to 3.5/4 with a win over recent World Championship Challenger Aleksandra Goryachkina.

That leaves the standings as follows before the final day of the round robin:

China are guaranteed a place in the final and now only the USA or Europe can join them. The US team could seal qualification in the first match of the final day with a win over Europe, but in the first half of the tournament it was Europe who won the clash 3:1.