Vishy Anand ended a sequence of four draws with a sparkling miniature win against Ian Nepomniachtchi, who found himself lost in 15 moves and a couple of minutes against the former World Champion. Vishy almost followed that up by taking down Hikaru Nakamura, but the US star escaped on a day when China and Europe won both their matches to tighten their grip on qualifying for the final. Peter Svidler played Magnus Carlsen during our live commentary but couldn’t quite upstage an appearance by MrDodgy. 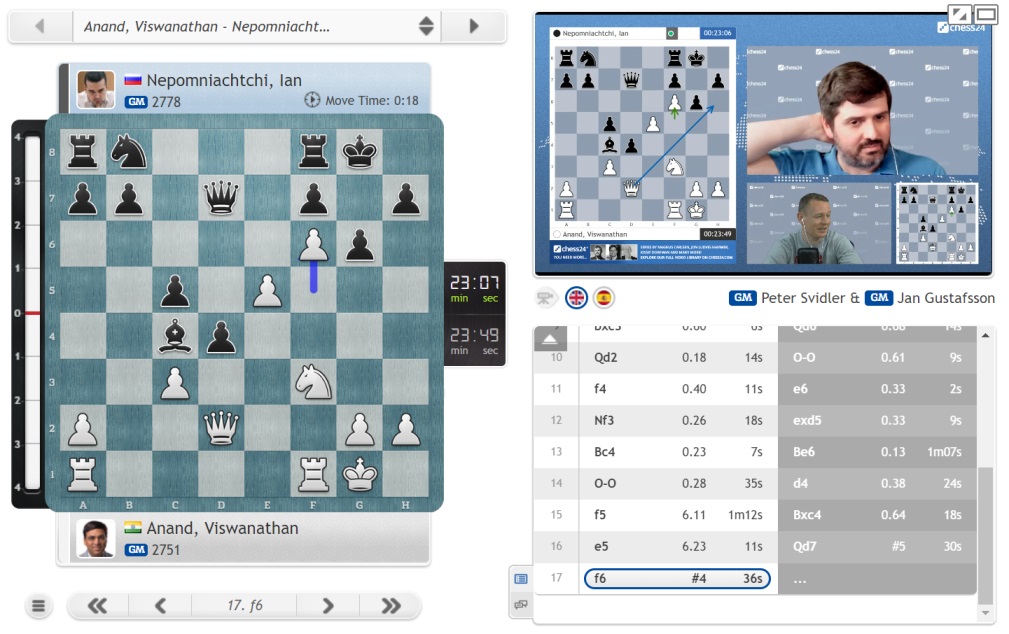 Another tough day at the office for Ian Nepomniachtchi

You can replay Jan and Peter’s Day 3 commentary on the FIDE Chess.com Online Nations Cup below:

Round 5: Vishy starts with a bang

Barely had the day started when all attention was centred on the top board in the India-Russia clash. 5-time World Champion Vishy Anand was taking on the Grünfeld Defence of Candidates Tournament co-leader Ian Nepomniachtchi:

In this position Boris Gelfand, Anish Giri and Evgeny Tomashevsky had all played 12.Bc4 and gone on to draw, with Evgeny doing it against Nepo himself in the 2018 Russian Championship. Here Vishy played the innocuous-looking 12.Nf3, and if Ian was surprised he didn’t show it when he spent just 9 seconds on 12…exd5. After 13.Bc4 he did think just over a minute on 13…Be6 (the losing move according to Ian), while after 14.0-0 he barely hesitated to play 14…d4:

To be fair, it’s not spotted by Stockfish on a low depth, but he’d fallen hook, line and sinker for a trap Vishy’s seconds Radek Wojtaszek and Grzegorz Gajewski had cooked up long ago. Black is lost! Vishy either did some checking or was simply savouring the moment before he played 15.f5! Bxc4 16.e5! Qd7 17.f6, and Nepo resigned, since he can’t stop a quick mate on g7 or h7!

It recalled what Magnus Carlsen had said the day before about Nepo’s opening prep, “I think it’s good in general, it’s just that whenever he’s surprised he doesn’t want to think,” but this disaster felt like one which might happen to anyone.

That wasn’t enough for India to score a first win, however, since Vladislav Artemiev’s mistake 44.Kd3? (44.Ke4! is winning) was met by what looks an unfortunate pre-move or mouse-slip:

That was far from the only misfortune at the very end of a match in Round 5, however. Alireza Firouzja had a draw in his grasp in a tricky rook ending against Levon Aronian, but he missed the chance and Levon won a 3rd game in a row to give Europe victory over the Rest of the World. That was despite Anish Giri (0.5/3) losing to Bassem Amin.

Fabiano Caruana also scored a 3rd win in a row for the USA, taking down Wang Hao in a game where the Chinese player might have had a fortress if he’d stood still and not later gone for a plan of pushing his h-pawn:

That win was cancelled out by Hou Yifan beating Irina Krush, but the match could still have ended in a draw if Leinier Dominguez hadn’t committed one of the biggest blunders in chess, against Yu Yangyi:

Dominguez had White and it was understandable that he resigned here, since there seems to be no defence against Rc1 next, but after 38.Kf1 Bd3+ (Black can’t allow the king to e2) 39.Kg2 Rc1 it turns out White can save the day with 40.Ra8+! Kh7 41.Rd8! and a likely draw.

In the break after Round 5 Peter Svidler played some Banter Blitz, and when he foolishly accepted the challenge of a certain MagzyBogues he wasn’t thrilled to see Magnus repeat the 3…h5 he’d infamously tried against Ding Liren in the Magnus Carlsen Invitational. MrDodgy was also on hand during the game, which you can replay below:

Round 6: The rich get richer

There was no stopping the favourites in Round 6, but it was only China who won convincingly, crushing the Rest of the World 3.5:0.5. That included the fastest ever player to reach 2700, Wei Yi, beating the second fastest, Alireza Firouzja:

Wesley So’s first win of the event, over Adhiban, proved enough for the USA to beat India, but for most of the round it had seemed as though Vishy Anand was going to pick up a 2nd win in a row against none other than Hikaru Nakamura:

22…f4! was the start of a powerful attack by Vishy that saw Hikaru needing to give up two minor pieces for a rook. The material balance was clearly winning for Black, but only until Nakamura managed to vacuum all the other pawns and pieces off the board, when the pure knight and bishop vs. a rook was a simple draw.

Europe owed a hugely important victory over Russia to Maxime Vachier-Lagrave, who made up for missing a win over Teimour Radjabov in the first match of the day. The Frenchman’s victim was Nepomniachtchi, again, with the game becoming absolutely wild. Nepo’s 28.exd5? was another understandable mistake:

White would have an overwhelming advantage if not for 28…Qg5+! 29.Kf1 Qf4!, when it turns out it’s too late for White to consolidate. That’s objectively speaking, however, and Ian brilliantly managed to recover into a drawn heavy-piece ending, until he made the last mistake on move 91 with 91.Kh2:

Maxime’s 91…Ka3! was winning, since Black ends up material after 92.Rf3 b1=Q!. If Ian had played 91.Kg2 instead, then after 91…Ka3 92.Rf3 b1=Q it makes all the difference that the king is supporting both the rooks on f3 and f1. In fact, with the king on g2, it’s White who’s winning there, with two rooks against two queens! 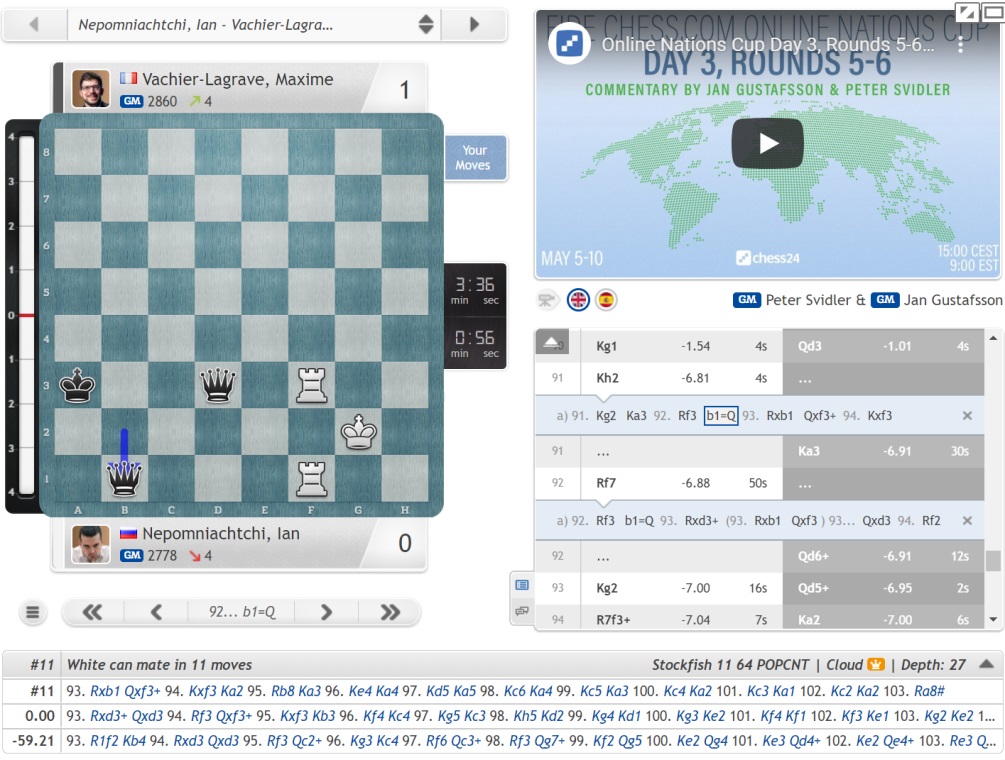 As it was, Maxime and Europe won, meaning they stay only 2 points behind China, while Russia are a full 4 points further back:

The best hope for Russia and the USA is perhaps for China to beat Europe in their match in Round 7, since that would blow the race wide open for the 2nd spot in Sunday’s final.

Jan and Peter will be back with live commentary on tomorrow’s Day 4 of the event, while Peter will also be playing Banter Blitz against chess24 premium users after the round is over: