Levon Aronian found a trick World Champion Magnus Carlsen described as “really awesome” to beat Vidit, then bamboozled Leinier Dominguez in an ending a pawn down, to score the only 2/2 of the day. That enabled Europe to catch the USA in 2nd place after Day 2 of the FIDE Chess.com Online Nations Cup. China nevertheless continue to lead, now by two points, despite dropping their first match point of the tournament after being held to a draw by Russia. 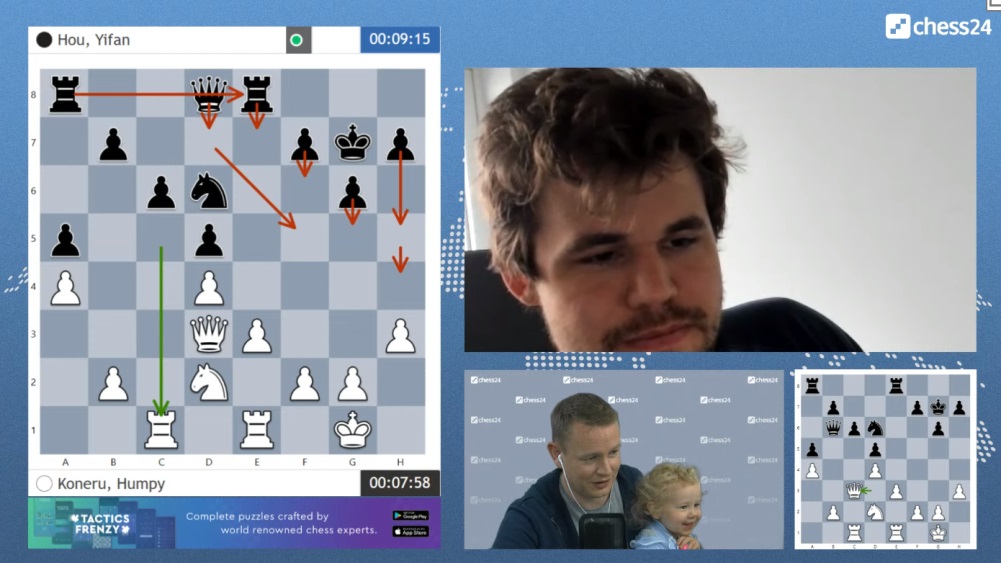 Magnus Carlsen thought he would be the most popular commentator on the live show...

We’ve been lucky for our commentary that not all the world’s best players are taking part in the tournament! World Champion Magnus Carlsen felt the organisers hadn’t put much effort into recruiting him but also didn’t feel too attracted to the system:

I think for me it would have felt more important to play if I had been, let's say, American or Chinese or even Russian. Representing your country in such a tournament is huge, but representing Europe - I don't feel so strongly about Europe.

Magnus: Why are you not playing the tournament, Peter?

That’s not true, of course, though it is true that Russia, as always, have an embarrassment of riches! We’re not sure why Jan Gustafsson isn’t in the European team as a 2011 European Champion, but in any case, we had a wonderful commentary trio for most of the day’s action:

Let’s take a look at some of the highlights:

Round 3: Levon Aronian steals the day

In global terms the most significant event of Round 3 was Russia taking the first match point away from leaders China. Ding Liren managed to surprise Ian Nepomniachtchi just out of the Grünfeld Defence opening and was soon much better. Magnus talked about Nepo’s approach to the openings – and chess life in general in these online lockdown times:

Nepo almost saved the day but couldn’t avoid a second loss in a row after he let the world no. 3 create an unstoppable passed d-pawn. Vladislav Artemiev hit back for Russia, however, with the final blow against Wei Yi exploiting some nice chess geometry:

The USA took advantage of that minor slip by China to catch them in the lead as they beat the Rest of the World 2.5:1.5. Irina Krush convincingly beat Dinara Saduakassova in the only decisive game, with the US Grandmaster so far scoring 1.5/2 on her return to chess after recovering from catching the coronavirus.

The day was stolen, however, by Levon Aronian. On top board Vishy Anand and MVL, who have both drawn all 4 of their games so far, made a solid draw, while both teams missed chances in draws on the bottom two boards. The decisive game saw Levon beat Vidit from a position that seemed destined to end in a draw, until 46…Bc2 allowed a wonderful shot!

47.b4!! This would clearly be good for White if the b-pawn is now free to advance, but doesn’t 47…axb3 just give Black an extra pawn? Levon showed his point with the only winning move, 48.Bb2!

The black b-pawn is stopped, the black bishop is trapped and there’s suddenly nothing to stop the white a-pawn simply marching up the board to win the game! Black can’t create any counterplay against the white king since his queen is forced to prevent mate on g7. After 48…h5 49.g5! Vidit could already have resigned.

That trick by Levon drew huge praise from our commentary team:

And the team captain:

Round 4: Levon, and Europe, do it again

Europe took down co-leaders USA in the last round of the day by the unusual team strategy of drawing with White and winning with Black. Anish Giri’s appearance against Wesley So was confirmation that he'd survived the team Zoom meeting with Garry Kasparov, but no real clarity was shed on his relationship with another World Champion:

The wins came from Nana Dzagnidze against Anna Zatonskih and that man Levon Aronian, who took down Leinier Dominguez. Levon’s 9…h6 was a very rare move that surprised our commentary team:

The one exponent of the move appears to have been 14-year-old Indian Grandmaster Raunak Sadhwani, and in fact until move 17 Leinier and Levon were follow a game Raunak lost to Nodirbek Abdusattorov in this year’s Aeroflot Open. The position seemed one in which White must be slightly better with an extra pawn despite a ravaged pawn structure, but just two moves later Leinier’s 19.Ne4?! looks like a mistake:

When bishops were exchanged with 19…Bxd2 Black soon took over, though it was hard to imagine Black would end the game about to give mate!

A great fight back from Levon after a tough first day:

Elsewhere China took full advantage as Vidit mixed something up on move 15 against Wang Hao. You didn’t need to be World Champion Magnus Carlsen to give the verdict we got that, “Black seems to be a pawn up”, and it turned out there was no real compensation. Vidit only made things worse as he sank to a 3rd loss in 3 games, though when you face Caruana, Aronian and Wang Hao such calamities can happen!

Russia duly beat the Rest of the World team, with Candidates leader Nepomniachtchi getting some redemption by beating Candidates qualifier but not player Teimour Radjabov in a game where the Russian’s speed of play paid off. Sergey Karjakin was making his debut for Russia on Day 2 after internet issues the day before. Magnus commented during live commentary:

He's turned 30 and has kids... I think he's not fully motivated to play chess at this point.

Still, Sergey is a formidable speed chess player and scored 1.5/2, even if his win over Jorge Cori featured one dicey moment:

23…Kb6! would have left Karjakin unable to defend both attacked pieces, with the best 24.Rxf7 running into 24…Bb5! After 23…Be8 24.Rb3 the danger had passed, and Sergey went on to win, if not entirely convincingly.

That leaves the standings as follows after 2 of the 5 days of the preliminary stages:

Currently top seeds China seem odds on to reach Sunday’s final, while USA, Europe and Russia look likely to battle it out for the other spot. Tune in each day for live commentary – and perhaps some Banter Blitz – from Jan Gustafsson and Peter Svidler live here on chess24!