Yu Yangyi beat Anish Giri and there were wins for Hou Yifan and Ju Wenjun as top seeds China scored a perfect 100% on Day 1 of the FIDE Chess.com Online Nations Cup. Fabiano Caruana was the other top performer, scoring endgame wins over Vidit and Vladislav Artemiev to help the USA into 2nd place with a win over Russia and a draw against Europe. There are four more days of double rounds to go before the final match, with Peter Svidler and Jan Gustafsson commentating live here on chess24. 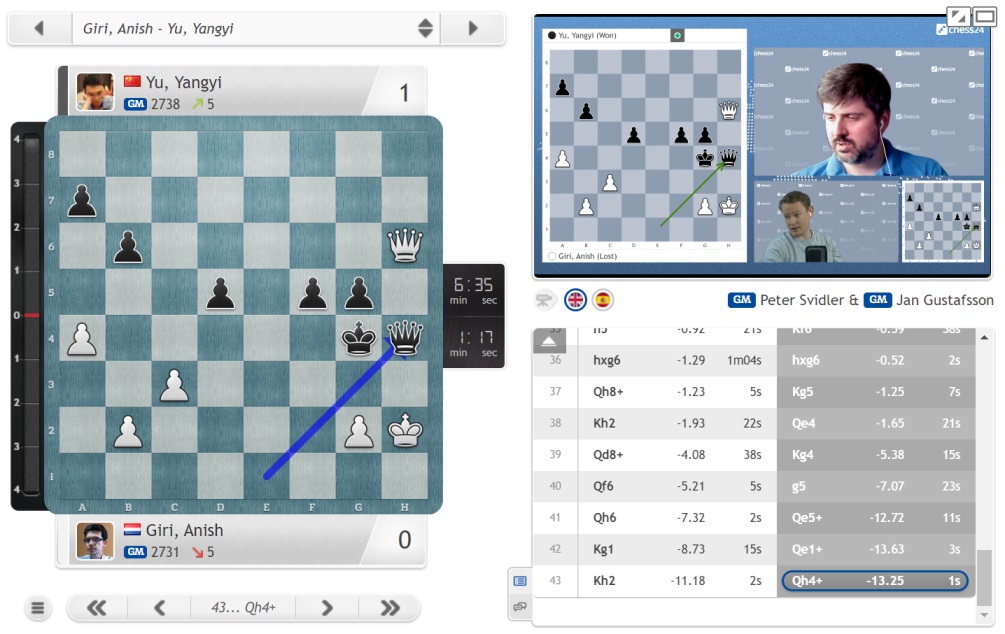 Yu Yangyi, like Fabiano Caruana, scored 2/2 on the first day

You can replay Jan and Peter’s commentary on Day 1 below – note that although no pgn file with the games was provided at the start we were eventually able to show the games:

As mentioned in our preview, the favourites were China, and they lived up to that reputation by scoring the only win of the opening round:

One of the most poignant parts of the Nations Cup is to see ‌Levon Aronian back at the chessboard after the tragic death of his wife Arianne Caoili, but Russia’s Vladislav Artemiev wasn't going to make it a gentle return:

The white rook soon reigned supreme on the 4th rank as Artemiev wrapped up a win, but Jan-Krzysztof Duda scored an equally convincing win over Dmitry Andreikin to save the match.

India picked up a surprise draw against the USA after women’s no. 2 Humpy Koneru struck the final blow in a chaotic end to her game against Anna Zatonskih. 41.Rxc7? was the last mistake:

That left Fabiano Caruana needing to win on demand with an extra pawn against Vidit. He managed, though it required showing how to win with two bishops against a knight – he got there after 119 moves!

Caruana showed that his fine form from the Magnus Carlsen Invitational has gone nowhere as he repeated that feat to win another drawish looking endgame against the extremely tough Artemiev.

That left Ian Nepomniachtchi needing to beat Hikaru Nakamura to save a draw for Russia in the match, but instead he pushed too hard and lost in 138 moves.

China marched on, with Ju Wenjun beating Nana Dzagnidze comfortably on bottom board while Yu Yangyi won his second game of the day, this time against Anish Giri:

Giri’s 22.Re6!? only saw his rook get into difficulty after 22…Ne4!, though 23.Qh3! seems to save the day. After 23.f3? Kf7 Black won the exchange and later Yu Yangyi converted by giving back the extra material at the perfect time:

Our commentators were wondering what it would be like to play for Europe’s team captain, the legendary Beast from Baku, Garry Kasparov! He’d not known for his bedside manner:

Jan asked what Garry could do…

Those 5 words sounded even more ominous than usual. Garry is watching:

In the other match the Rest of the World picked up their first points after Adhiban failed to stop Jorge Cori’s passed a-pawn in time, while Alireza Firouzja held a deeply unpleasant position against Harikrishna.


That left the team standings as follows after Day 1 of the Online Nations Cup:

There are four more days of double rounds before the top two teams will play one final match on the last day. 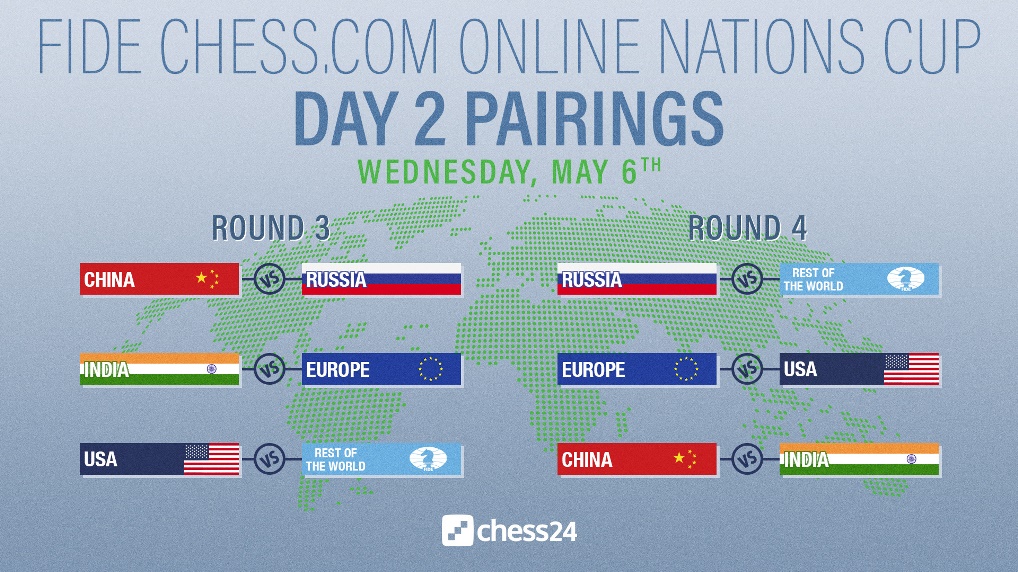 Tune in each day for live commentary – and some Banter Blitz – from Jan Gustafsson and Peter Svidler live here on chess24!