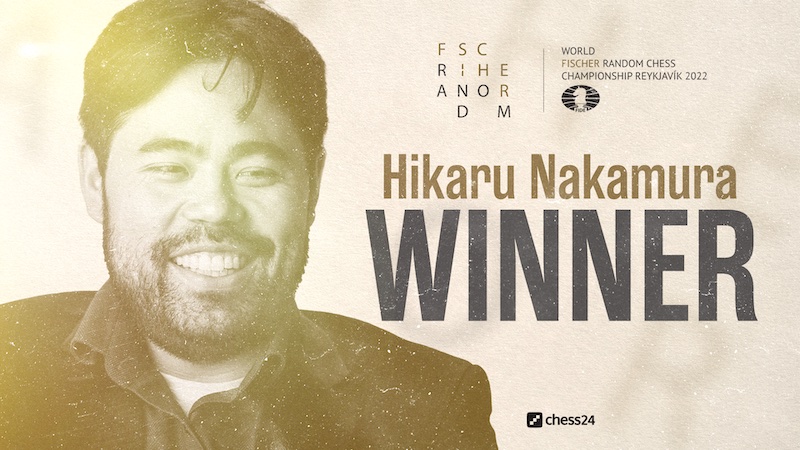 Replay all the Fischer Random World Championship knockout games using the selector below. 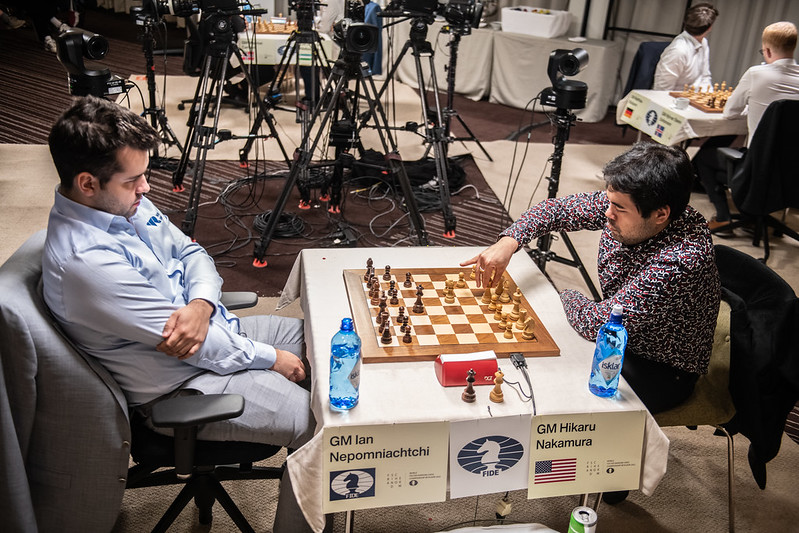 Ian Nepomniachtchi and Hikaru Nakamura were both on a roll | photo: David Llada, FIDE

Hikaru Nakamura and Ian Nepomniachtchi went into the final of the 2022 Fischer Random World Championship in top form, after both winning their previous three games. It was Hikaru who would make it four in a row, as he played aggressively in the opening and then spotted the clever trick 19…a6!

There was no good solution for White, with Nepo going for 20.e5 and accepting to play a position a pawn down. He had chances to get back in the game, but 29.Rfd1? allowed Hikaru to deliver a heavy blow.

A day earlier Nepo had explained that his response to going a point down against Magnus Carlsen was to keep playing fast and aggressively. Back then it worked to perfection, but in Game 2 Hikaru seemed to be comfortably parrying the threats and taking over, until at the very end he took a draw by repetition.

It turns out the king could have gone to f3, allowing Nepo to capture on d5 with check... and there’s no killer blow. Hikaru could then hope to win with his kingside passed pawns. That would have been a bold gamble when leading in the match, but the miss nearly came back to haunt Nakamura. He would later say:

If I won the second game this could have been a nice smooth day where everything was all great.

Game 3 was the moment when Nepo’s speed — and a powerful early break in the centre — paid off. In the hugely complicated heavy piece position that followed there were countless computer-flagged blunders by both sides, but it was always Hikaru who was struggling with seconds to navigate the mayhem. Ian won in 53 moves.

Remarkably, despite Hikaru finishing 2nd to Magnus in the group stages, that was his first loss of the whole event. He may have felt he needed to recover, since to general shock the 4th and final rapid game suddenly ended on move 15 in a position full of life. The computer prefers Black, but anything could have happened.

That provoked some strong reactions…

…but on the other hand, it only guaranteed more drama. The players would play off for the title in a single Armageddon game. 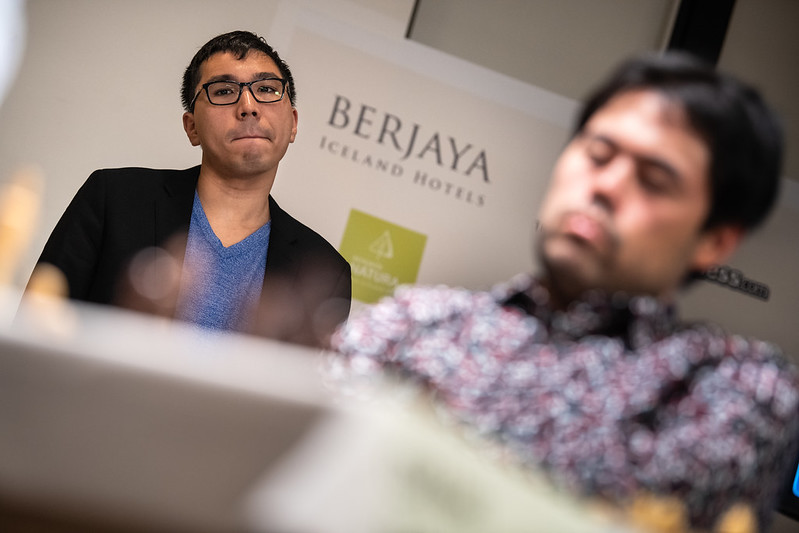 Wesley So couldn't retain his title, but he helped Hikaru Nakamura prepare for the Armageddon | photo: David Llada, FIDE

The rules were that White would get 15 minutes, while the player with Black, who only needs a draw, would be the one who bid the lowest amount of time. Here it felt like Ian Nepomniachtchi was the clear winner, since his bid of 13 minutes — giving up 2 minutes — was enough to get the advantage of draw odds. 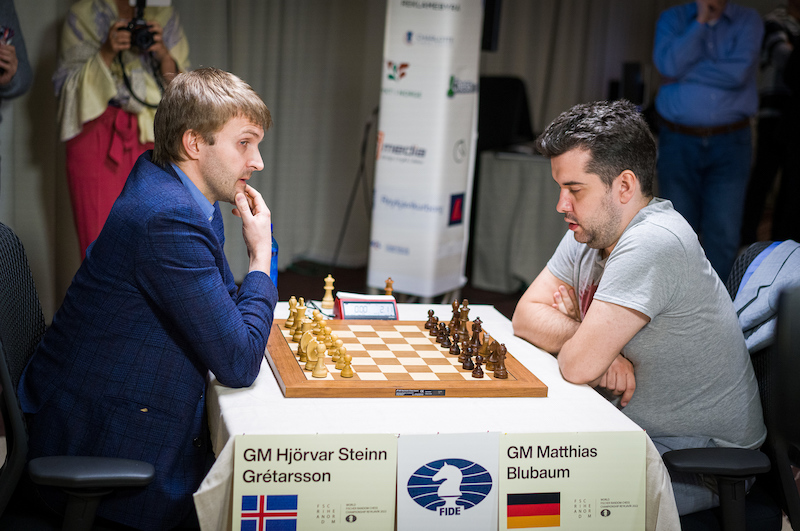 Hikaru later explained that he’d seen Ian usually bid the maximum amount in such situations, while he thought that giving up 60-90 seconds was all he could afford.

The game itself seemed to go even better for Nepo when Hikaru pushed 13.d4?!, a move that left gaping holes in his position and, according to our commentators, came at the worst possible moment.

The computer agreed, and after 13…Ng4! 14.Qxf5 it turns out 14…Qh6! was close to winning, but for tricky tactical reasons. Nepomniachtchi understandably blitzed out 14…Qxf5 instead, removing queens from the board and seemingly ensuring a comfortable edge.

It turns out, however, the position was altogether trickier than it looked, and with just a couple of inaccuracies from Nepo, Hikaru was able to take complete control.

Nxg4 is a huge threat and there are no good squares for the bishop, so that the exchange sacrifice 26…Rxe5!? was probably the best try. It didn’t get any easier for Black, however, and Hikaru began to weave a mating net. 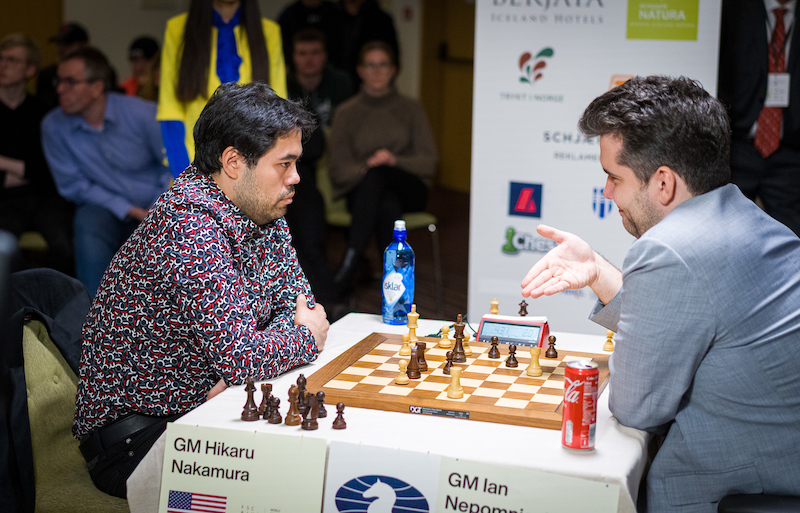 Hikaru Nakamura had won the first official World Championship of his career, since it’s a curious fact that he’s never won a World Rapid or Blitz title. 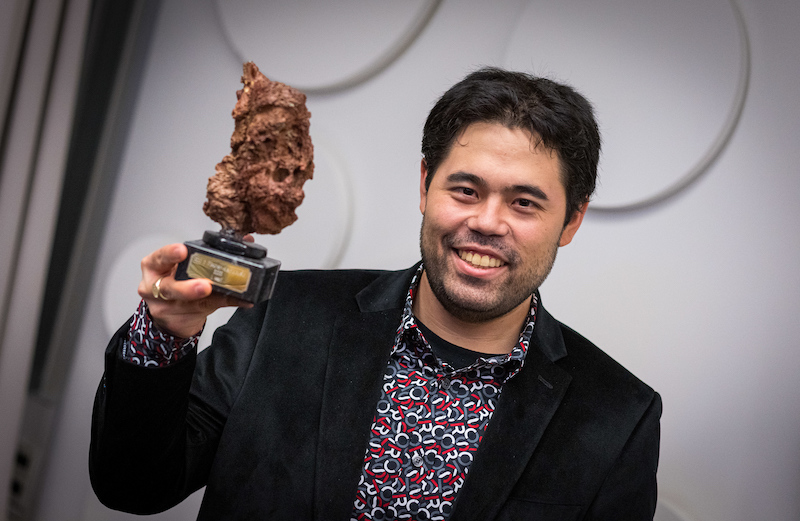 He’d also done it in the same spot where Bobby Fischer had won the title for the USA. He told NRK, when asked about following an American guy who beat a Soviet guy:

I actually thought about that a little bit last night. The fact that the match was held here in 1972 between Fischer and Spassky, and then Ian obviously representing Russia, what used to be the Soviet Union, and of course I’m from America, so I thought about it. I guess it’s kind of fitting, there’s some irony, the gods at least seem to have a sense of humour and it seemed to work out the same way as it did half a century ago.

Ian Nepomniachtchi, meanwhile, could lament finishing runner-up in another World Championship, after a year in which he’d not just lost to Magnus in Dubai but also lost a playoff for the World Rapid Championship.

Nevertheless, at least in chess terms he’d justified his wildcard from the Russian President of FIDE, Arkady Dvorkovich, and he’d picked up $85,000. 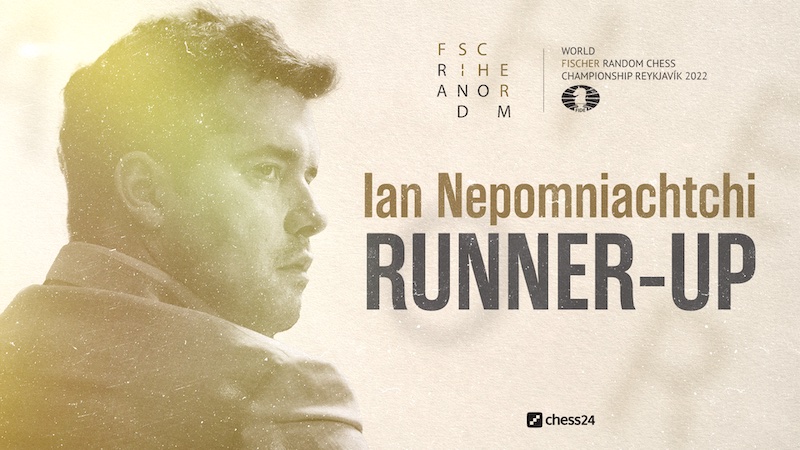 There were also matches for the remaining places, with most focus, especially since the TV pictures were coming from Norwegian TV, on the 3rd place match, Magnus Carlsen vs. Nodirbek Abdusattorov. 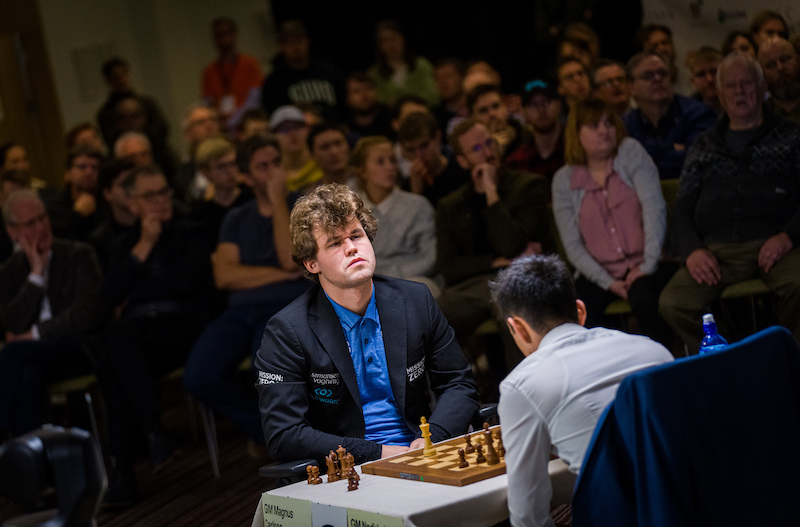 Magnus Carlsen lost 4 games in a row, but he came back at the end | photo: Lennart Ootes, FIDE

That got off to a sensational start, when Magnus went astray while pushing for a win and slumped to a 4th loss in a row.

If the bishop goes to the only “safe” squares, b7 or d7, then Rc7 wins it next move.

You can’t keep Magnus down for too long, however, and he stormed back to win the next game.

That same final c7-c8 rook move would win Magnus the 3rd game as well, before he convincingly won again with Black to clinch a 3-1 victory and 3rd place. It had been a mirror image of the semi-final against Nepomniachtchi, where he started with a win and then lost the next three.

Vladimir Fedoseev took 5th place after Wesley So lost the 3rd and 4th games, despite the US star having a great chance to hit back and take that match to Armageddon. 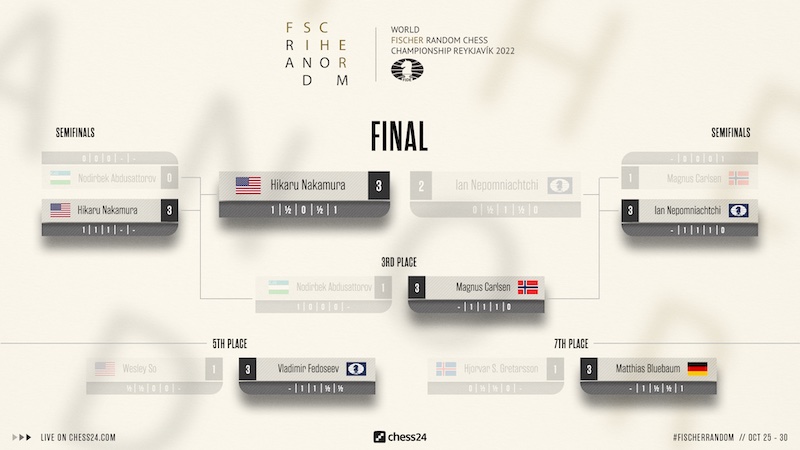 So that’s all from the 2022 Fischer Random World Championship in Reykjavik. As we’ve become accustomed to this year, there’s absolutely no break, since already on Wednesday, November 2nd, the 8-player Finals of the Chess.com Global Championship begin, with Hikaru Nakamura (playing Jan-Krzysztof Duda) and Wesley So (taking on Dmitry Andreikin) both flying to Toronto, Canada to compete.