Hikaru Nakamura earned the wrath of the Millionaire Chess organisers for a 9-move draw against Luke McShane in Round 7, but the gamble eventually paid off. Evgeny Bareev’s failure to win meant chess fans were treated to a 9-player playoff in which Wesley So and Nakamura knocked out the likes of Fabiano Caruana and Gata Kamsky. In the third game of a final rapid match Nakamura beat So to clinch the single remaining place in Millionaire Monday. He’ll play for $100,000 against Yu Yangyi, Le Quang Liem and Aleksandr Lenderman. 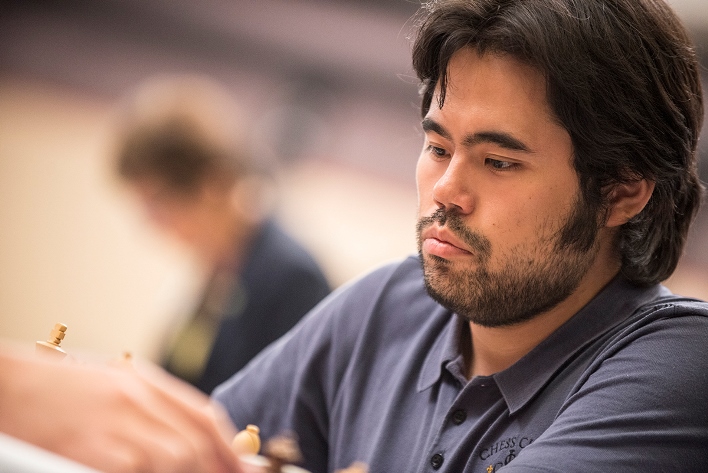 It was a traumatic day for Hikaru Nakamura, who wrote in our broadcast chat that he'd been sick for the last couple of days, but it ended with the US no. 1 vanquishing his closest rivals | photo: David Llada, Millionaire Chess

We last checked up on Millionaire Chess after Round 4, when Wesley So, Gata Kamsky and Fabiano Caruana had all been struggling to assert their chess class. In Saturday’s Rounds 5 and 6 normal service was restored, and they all entered the final day with a chance to reach the 5.5/7 mark that had been enough to earn at least a playoff for Millionaire Monday in 2014.

So Round 7 was absolutely crucial, and it proved both enormously controversial and tense:

Luke McShane and Nakamura started the day on a healthy 5/7 points, but were perhaps unfortunate to be paired against each other. Luke played 1.e4, Nakamura responded 1…c5 and the players blitzed out the Najdorf Sicilian until on move 7 McShane spent 1 minute and 34 seconds before deciding to offer a move repetition. Nakamura took 40 seconds to decide to go for it, and by move 9 the position had been repeated three times and the game was over. Or was it?

The regulations for Millionaire Chess are very vocal on the subject of early draws - “fans wish to see real chess games… Anything else makes a travesty of our wonderful game” - and go into some detail:

The penalties for breaking the following rules may be:

This was a nightmare scenario for Maurice Ashley and his team, since they also say they will apply the rules in “a fair and consistent manner” i.e. making no exception for the star players. A long and painful post-mortem followed, the end result of which was that the players weren’t punished, but Maurice vented his fury, saying that the 9-move draw “makes chess look like a farce” and adding, “we’re going to confer with FIDE to see if anything can be done about this scourge on our game”.

So what do you think? Well, first hear what the players and Maurice had to say about it:

There was another aspect to the early draw, though. It was far from clear it would prove a wise choice for either player (in fact GM David Smerdon makes a convincing case that it was in neither player’s best interests). As things developed we were faced with an astonishing cliff-hanger.

Le Quang Liem made his place in the final four guaranteed with a 30-move draw against Wesley So – not the greatest fight you’ll ever witness, but within the letter if not the spirit of the rules. Yu Yangyi didn’t leave anything to chance and beat Axel Rombaldoni in style to qualify for the last four for a second year in a row. Aleksandr Lenderman dashed the hopes of Ray Robson doing the same and won to reach the coveted 6/7 that guaranteed him qualification. 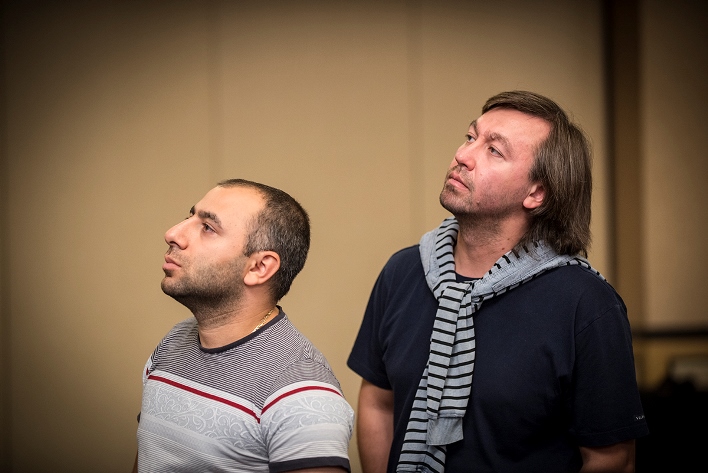 That left one position up for grabs, and it was clear we were headed for a log jam of players on 5.5, with top seeds Caruana, So, Nakamura and McShane all praying that no-one else would reach 6 points.

The problem they had was that Russian veteran Evgeny Bareev for a long time looked set to do just that. He let a glorious chance slip after 19…Rfe8?

20.Qf3!, hitting everything on the f-file, would have been a knockout blow, but Bareev instead played 20.Qd2. For a long time after that Bareev still kept nine players biting their fingernails, but eventually he was forced to scrape a draw. 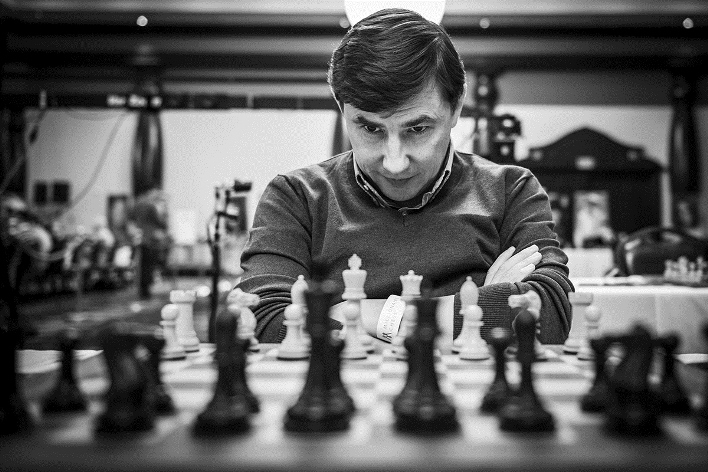 That was a minor tragedy for Bareev, but great news for chess fans, since instead of a free evening it meant a massive 9-player (2529-rated Gil Popilski decided to take a Millionaire Monday spot in a lower rating category) playoff. Two groups, one with four and the other with five players, played a rapid and sometimes blitz round-robin to determine who would play a final match. The system was a little complicated, but you can play through all the games below:

As you can see, Fabiano Caruana’s under-developed speed chess skills let him down again (losses to So and McShane, a draw with Shimanov). Bareev’s horror show wasn’t over yet. He lost his first two games and made sure the meaningless (for him) third game against Nakamura would live long in the memory:

This is the position when Bareev resigned… on move 11! The white queen is in dire straits, and attempts to rescue her work out badly - the a1-h8 diagonal is another horror show for White. 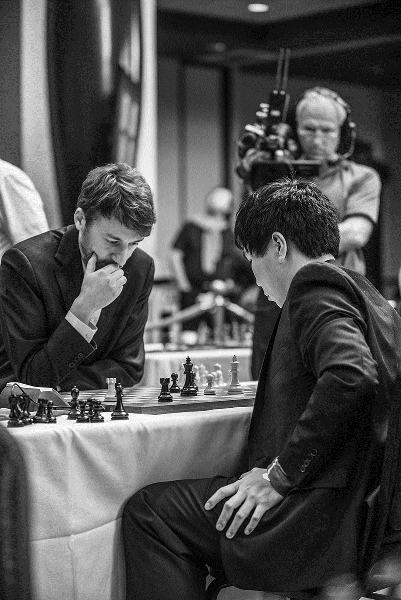 Not this year for either Luke McShane or Wesley So | photo: David Llada, Millionaire Chess

Gata Kamsky and Luke McShane put up a fight, but nothing could stop us getting the most eagerly-anticipated final match possible: So vs. Nakamura.

It turned out they would play three rapid games, then two blitz, if needed, then Armageddon. The first rapid game was drawn, and then in the second Wesley got a big edge out of the opening. Nakamura lashed out with 10…d3!?:

11.cxd3! was now the move, with the point that 11…Qxb5 runs into 12.Nxc6! and Black struggles to avert catastrophe on the e-file. Instead after 11.Bxc6+ Nakamura was able to untangle and castle, though it was still a shock when Wesley offered a draw only four moves later. 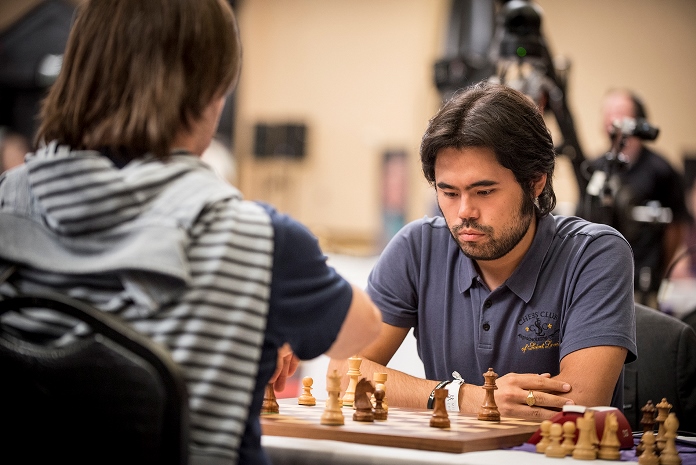 Nakamura first saw off the challenge of Kamsky and then went on to beat Wesley So | photo: David Llada, Millionaire Chess

That was a costly misjudgement, since Nakamura played an absolutely crushing attack in what became the final game. Only the tournament situation meant that So didn’t resign immediately after 31.Ng6+, blasting open the h-file to attack Black’s king:

And that was that. After earning the opprobrium of the organisers, world no. 2 Hikaru Nakamura has nevertheless made it to Millionaire Monday, where he plays Yu Yangyi to determine who takes on the winner of Le Quang Liem and Aleksandr Lenderman in the final. You can click through to the games below: