Hikaru Nakamura overtook Sergey Karjakin on the final day of blitz to take home the winner's trophy from the Paris Grand Chess Tour. The American displayed his great skills at accelerated time controls as he only lost one game in both sections. Wesley So drew his last eight games to finish clear third behind Karjakin and still leads the GCT overall standings. 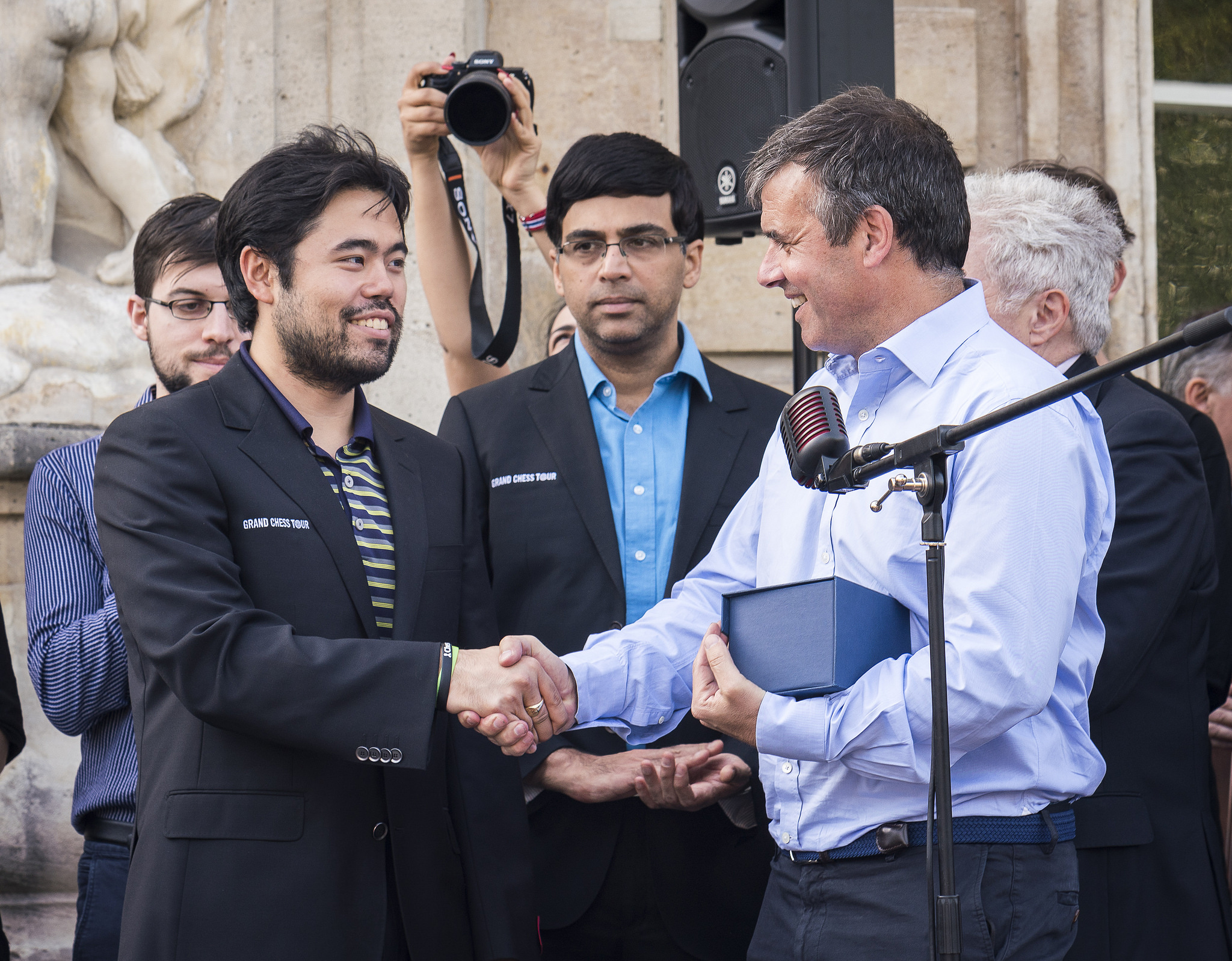 When we last reported from Paris, Wesley So had a one-point lead over Karjakin and Nakamura. The three players remained on the "podium" throughout the weekend, but ended up switching places. The first one to rise over his colleagues was Sergey Karjakin. The Russian seemed to be heading for clear first after his outstanding run of five consecutive wins on Saturday. At some point, Sergey even threatened to surpass Carlsen on the blitz live ratings list. 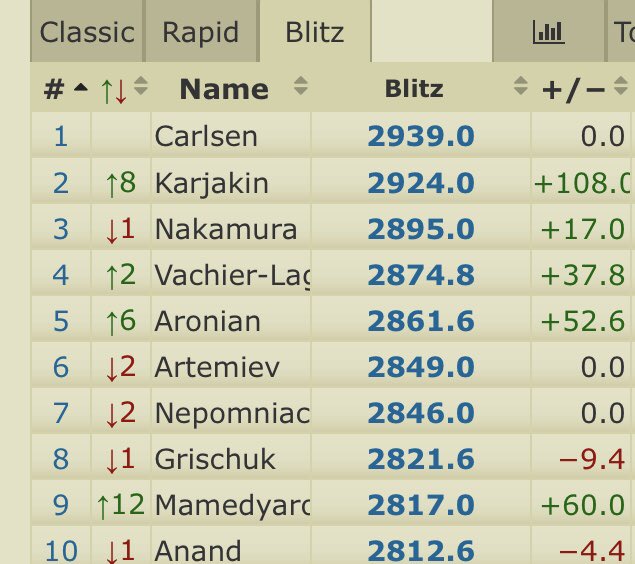 In a key match-up, Karjakin defeated So's French Defence in the fourth round of the blitz section. Black got a decent position after the opening, but White's initiative on the kingside proved to be enough for a win. When 36.Ng6+ was played, Wesley knew only a miracle would save him:

Earlier that day, Sergey had taken advantage of Grischuk's imprecise play in a sharp tactical game. Alexander could have gone on to convert his large advantage had he played 32...Qe3:

White can't take the bishop, as Qxf4 — attacking h2 — would be decisive. However, Grischuk chose 32...Qc5, and after 33.gxf4 the evaluation swung in White's favour. Karjakin had once again displayed his well-known skills in high-pressure situations. 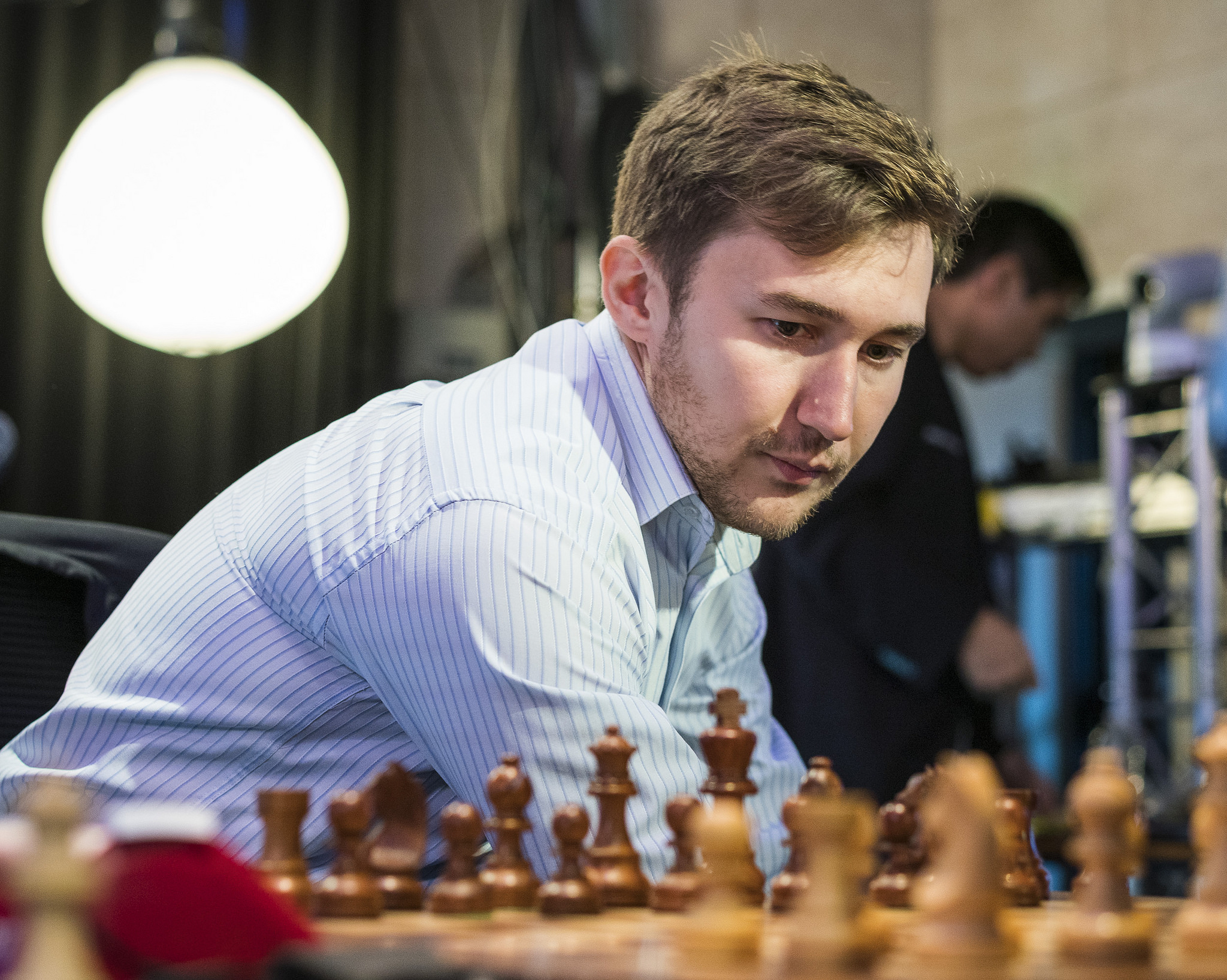 Meanwhile, Nakamura climbed to second place by winning three, drawing five and losing one game on the first day of blitz. All eyes were on Karjakin, but the American was only one point behind. This is how the standings looked after Day 1 of the blitz: 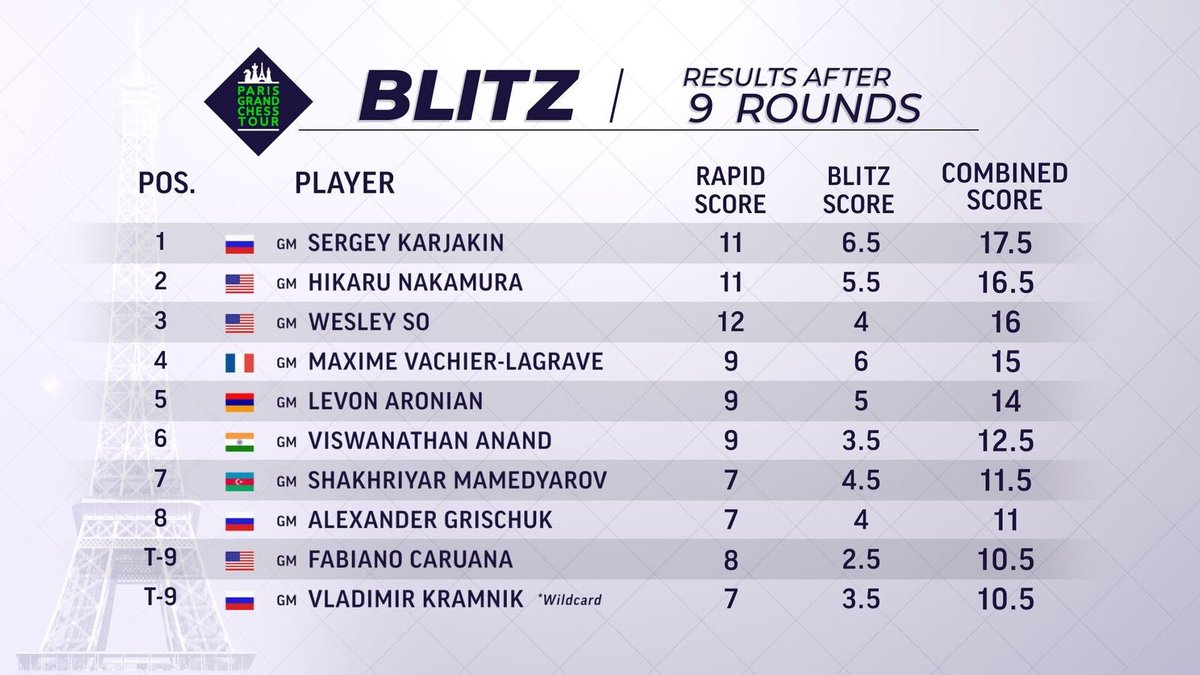 The final day started with the leaders clashing immediately. Nakamura had a slight advantage in an endgame with rooks and knights, but we cannot blame him for not converting with this time control, as White's passed a-pawn was very far from the black king, making calculations longer and more complicated.


Hikaru, however, scored in the next round, playing Black against Vishy Anand. The position already looked grim for the former World Champion, but probably sacrificing his knight was not completely necessary, as keeping the tension might have put up more resistance:

Anand played 27.Nxe5 and Nakamura only needed ten moves to cleanly convert his extra piece into a win. Karjakin drew against Grischuk and his advantage was cut to half a point. In the third round of the day, however, the Russian beat Kramnik while Nakamura drew and things went back to how they had begun on Sunday.

Then, in Round 14, Kramnik blundered a piece inexplicably against Nakamura:

The game finished suddenly when Vladimir played 18...Rd7?. Hikaru only used three seconds before capturing the knight with 19.Bxf6, attacking the queen. Kramnik resigned immediately and Nakamura was half a point behind once again.

Rounds 15 and 16 were crucial, as Karjakin lost the thread and was defeated consecutively by Anand and Vachier-Lagrave. Against the Indian, he allowed his opponent to use back-rank threats to achieve a winning advantage, while against MVL he let his opponent ambush his rook with two very active knights:

Two draws for Nakamura gave him the lead for the first time with two rounds to go. The blitz specialist went on to win his penultimate game against Mamedyarov to secure at least shared first place. Both in that game and in the last one — against Caruana — his opponents gave up advantages and ended up losing. Fabi finished a forgettable tournament losing another marathon game (122 moves) against his compatriot. 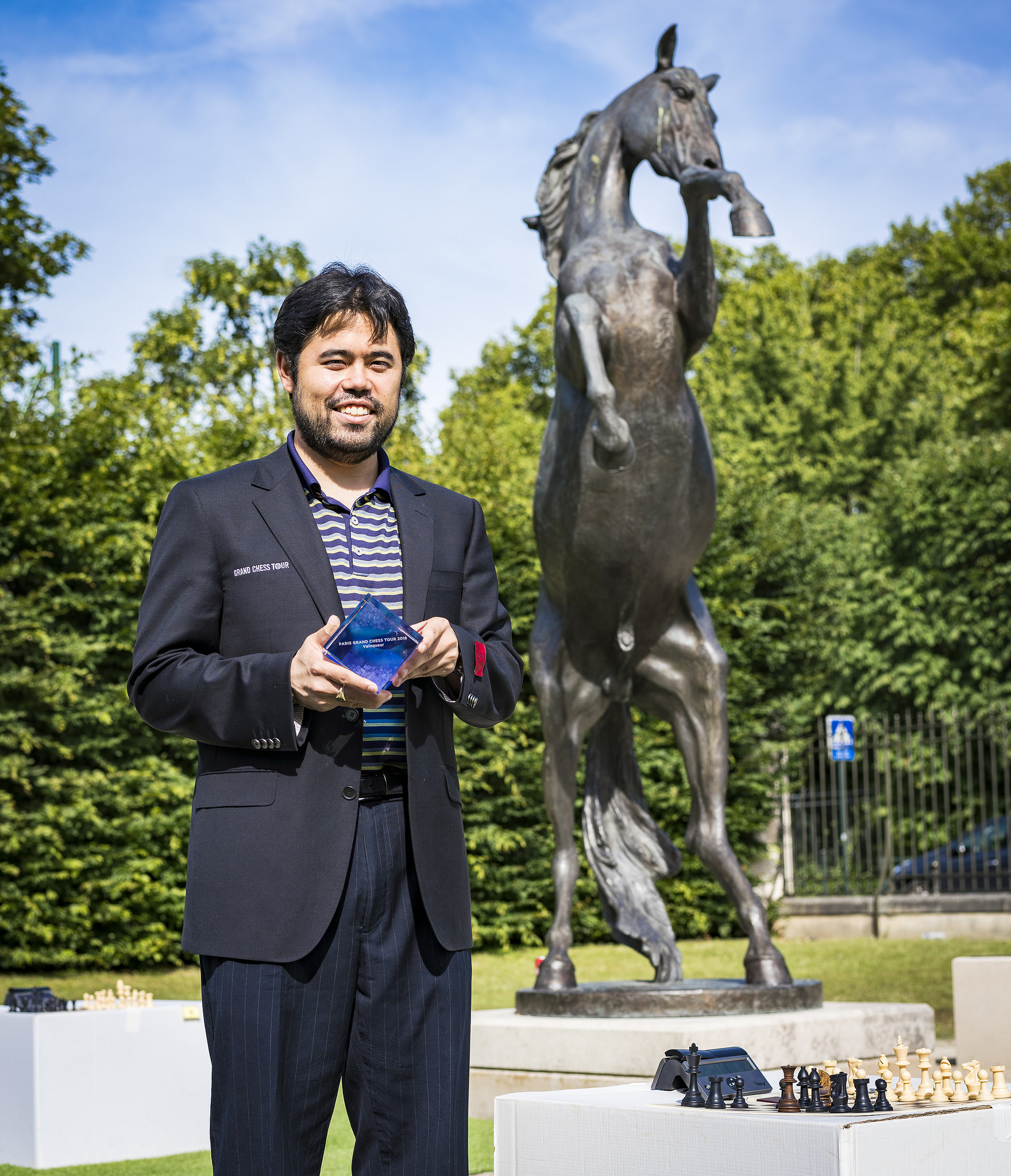 Nakamura took home $37,500 and 13 Grand Chess Tour points. In addition, his strong performances in the blitz sections of Leuven and Paris netted him 37.2 rating points, which leaves him 24 points behind Carlsen on the live ratings list. Hikaru is now ready to enjoy the summer:

Wesley So draws his way to third place

The events of the last couple of the weeks have proven that Wesley So is definitely better at rapid than at blitz. His awareness of that fact, however, pushed him to use a safety-first strategy on the last day of play. He started with a win over Vachier-Lagrave and drew the rest of his games to secure clear third place. This result granted him 8 GCT points, which left him as sole leader in the overall standings: 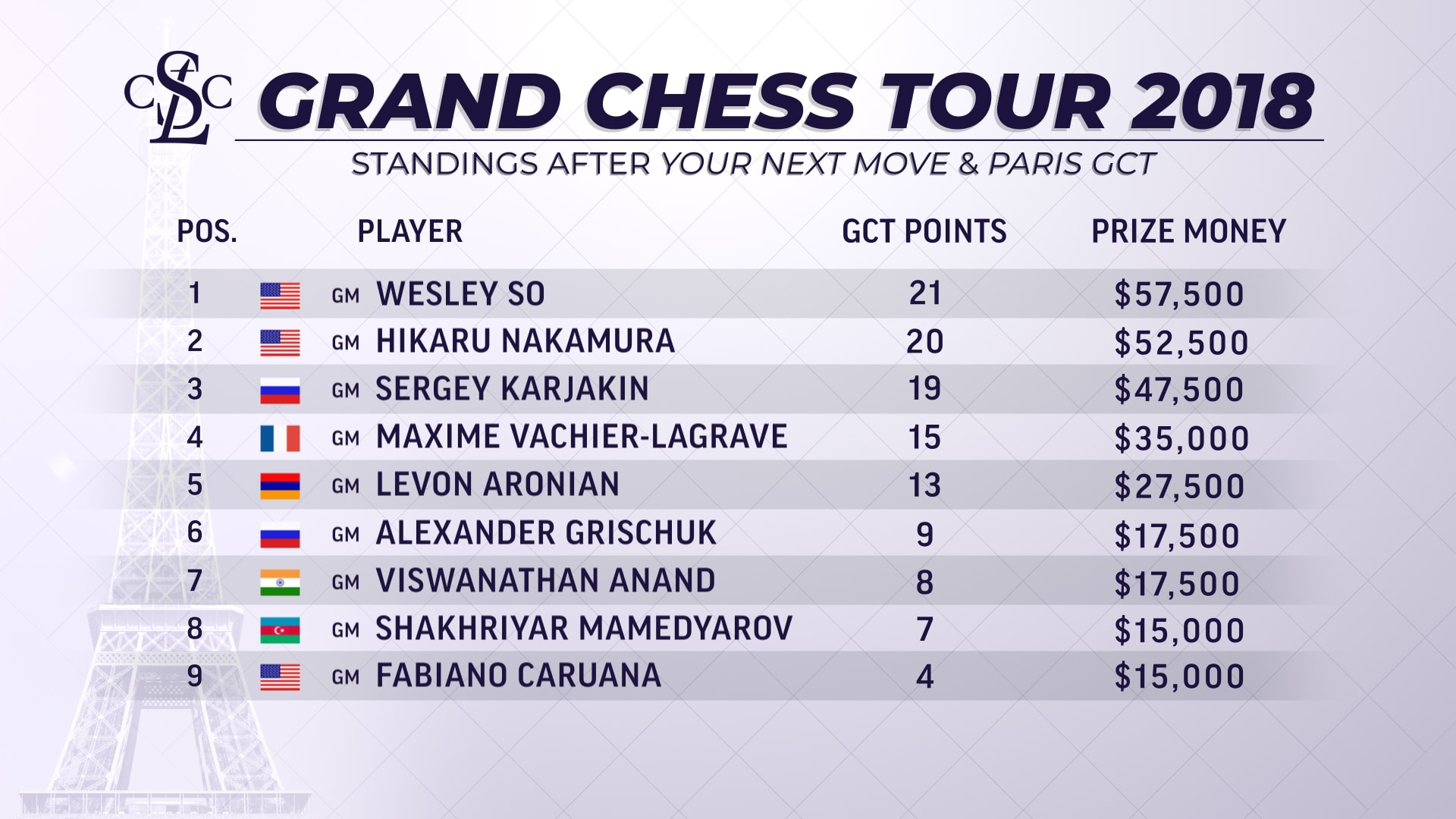 Three players are clear front-runners, and it is very unlikely for any of them to miss one of the four spots at the final event in London. On the other hand, the fourth spot could go to almost anyone else (except, perhaps, Caruana, who has another huge commitment in November). Everything will be decided in Saint Louis, where the players will meet on August 10th both for another rapid and blitz event and the Sinquefield Cup. 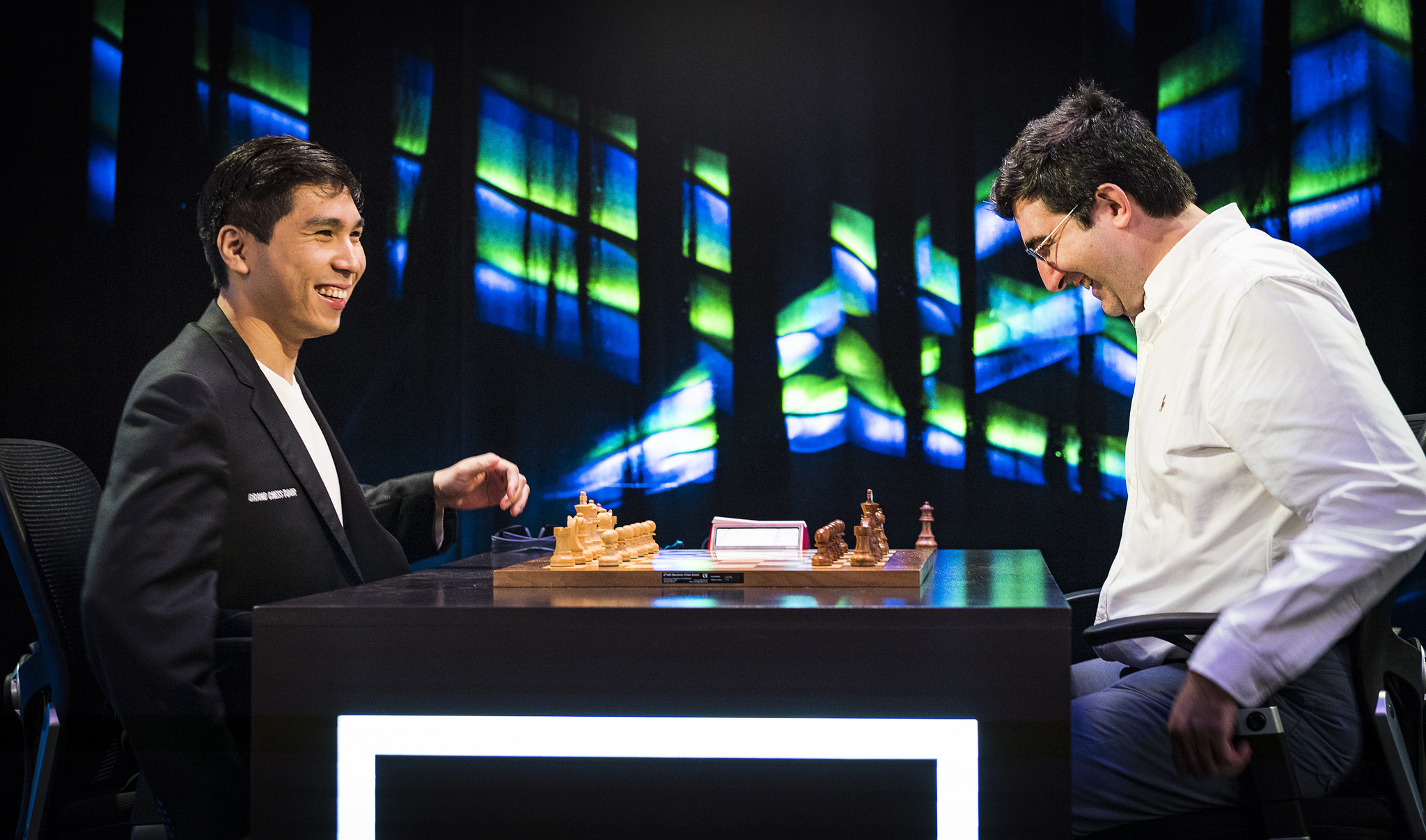 Before that, we'll have the Russian Higher League, the León Masters, the Dortmund Supertournament and the Biel Chess Festival (with Carlsen). Check out our calendar to stay up-to-date!

In case you missed it, you can also replay the action with live commentary from Yasser Seirawan, Jovanka Houska and Alejandro Ramirez: