Nakamura vs. Rosen in the Choker Cup final

US Chess Champion Hikaru Nakamura today plays the role of “final boss” as he takes on IM Eric Rosen in the Choker Cup Grand Final. Eric had to battle his way through the 8-player Challengers Choker Cup knockout, winning his first two matches 3:0 before beating Alexandra Botez 3:2 in the final. Choker is a new game combining chess and poker, with IM Malcolm Pein and poker expert Jeff Gross on hand to provide live commentary from 22:00 CEST / 16:00 EDT on Thursday 9th July.

You can watch today’s live commentary right here, or on the dedicated Choker Cup page:

The Challengers Choker Cup began on the 7th May, with eight players whittled down to one over the next two months. Each match is best of five clashes, with the players starting each clash with 10,000 chips and winning when their opponent runs out of chips.

Choker features three stages – first players are dealt cards with chess pieces and, as in poker, can call, raise or fold over three rounds of betting. Then the second stage is placement, where the players choose where to put their pawns and pieces, and it's here that Eric got off to a flying start. He was ultra-aggressive, first putting his queen on a2 to fork Alexandra’s a7-bishop and g8-rook and then putting a rook on g1 to attack the black queen on g7. As in normal chess, White moves first, so the white rook isn’t in danger! 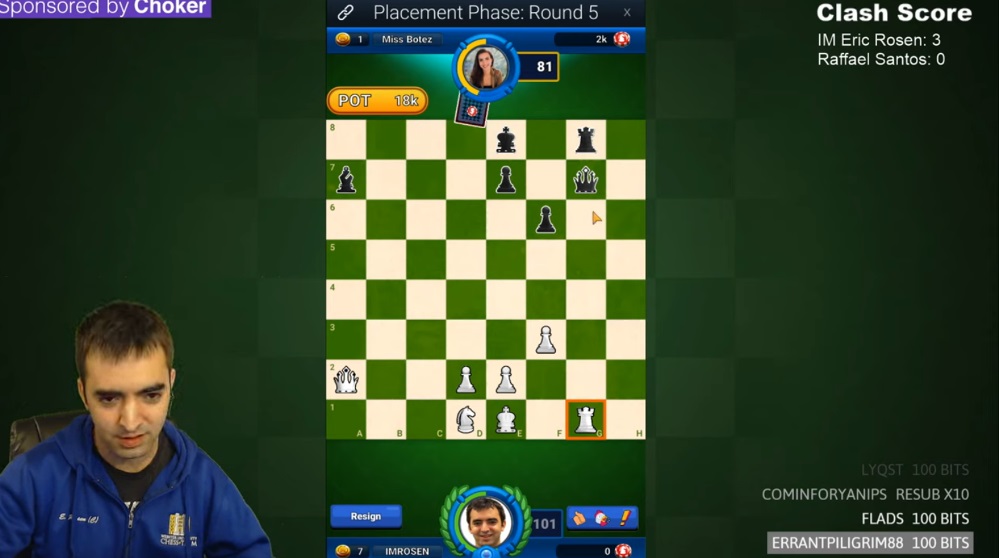 Alexandra’s last piece was a bishop, and though she put it on f7, attacking the white queen on a2, Eric could start the final chess stage by simply playing 1.Qa4+ to deal with that issue before picking up the black queen and going on to win. He also won the second clash to take a 2:0 lead, but Alexandra, who also won her first two matches 3:0, hit back to level the scores at 2:2!

Disaster struck in the final clash for Alexandra, however, as she folded a hand only to realise to her horror that she no longer had enough chips remaining to post the big blind, the obligatory first bet, of the next hand, and therefore lost by forfeit without a chess piece being pushed in anger.

…or with the live commentary:

Up next in the Grand Final for Eric is the world blitz no. 1, 5-time US Champion and unbeaten champion of Choker, Hikaru Nakamura, who explains what the game is about:

Hikaru was also giving some lessons the last time he met Eric in a match in February:

Since then, however, Eric has gained a lot more experience and it should be an intriguing final. Don’t miss all the action from 22:00 CEST (16:00 EDT) here on chess24!