Hikaru Nakamura scores the biggest payday of his career, earning USD $100,000 on "Millionaire Monday". After running the gauntlet of Sunday's qualification round, the American number 1 ran the table against Vietnam's Le Quang Liem, needing just the two 25 minute rapid games to finish off the finals.

Nakamura's semi-final match versus Yu Yangi was a closer contest, and included a free rook and pawn endgame lesson by the U.S. Champion and the tournament's energetic live commentary team in game 4. 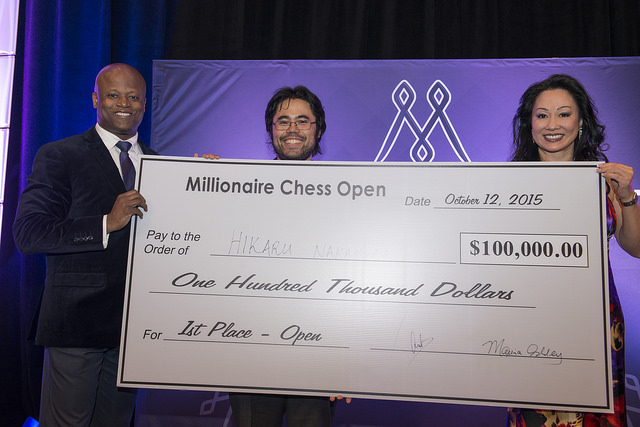 Checks are still a widely used, if impractical, form of currency exchange in the USA | photo: David Llada, Millionaire Chess

The Millionaire Chess Open is unique for many reasons, such as its enormous prize fund — including for the amateur sections — the focus on making chess glamorous and altering the stereotypical staid image of our sport, and mounting a serious effort to get chess back on TV. But it's particularly novel by virtue of a complex format that mixes classical, rapid and blitz, in an open Swiss, round-robin tiebreak, and knockout matches. "Millionaire Monday" — the semi-final and final matches are the knockout phase, and featured the top four players from each of nine sections: 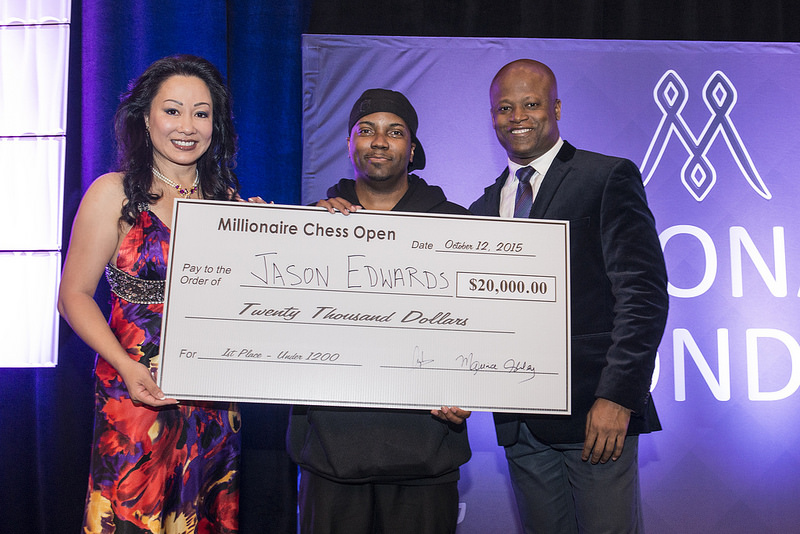 The winners were paid handsomely.

Prizes for the top 20 finishers, class prizes, and a host of special prizes, all added up to the million dollars, that gives the tournament its name.

Meanwhile in the Open, the likes of So, Caruana and McShane found themselves playing two more rounds to see who finished in fifth place and lower. They won their Round 8 games (including So 1-0 Bareev) and then drew in Round 9 (Caruana 1/2-1/2 So, McShane 1/2-1/2 Kamsky) to finish as follows:

This year the organizers Amy Lee and Maurice Ashley (pictured above) also wanted to give tournament participants the chance to actually win a million dollars. So they devised a closing ceremony bonus activity that featured all the players in the Millionaire Monday knockouts.

"Were you completely drunk when you came up with this?" - Tania Sachdev

The players were challenged with a math-based trivia contest to whittle down the nine competitors. For instance, Nakamura, Hernandez and Levkin were given ten seconds to come up with the next number in this sequence*:

Most of the questions proved to be too challenging to solve in only 10 seconds, but eventually the last man standing was Prachura, P. P., who was then asked to select one of 64 squares on a giant chessboard prop. He chose the c4 square after his favorite opening, the English, but sadly, the million was inside the envelope on b1.

Nakamura summed up the event in his winner's remarks:

They try to make chess sexy — Amy and Maurice — and that's what chess needs.

The centerpiece of the effort to make chess sexy, was the daily live commentary which aimed to strike a high impact pro-sports tone more commonly found in coverage of NFL Football. Did they succeed? Let us know in the comments.

Finally, let's hear from the winner and the runner-up, after the match.