Hikaru Nakamura will today commence battle for the $100,000 first prize in the 2nd edition of Millionaire Chess in Las Vegas. He’ll face very stiff competition from his new US teammate Fabiano Caruana and defending champion Wesley So. Lawrence Trent, Tania Sachdev and Robert Hess will provide live commentary on a tournament that again boasts a $1 million total prize fund, with amateur players competing for life-changing amounts of money. 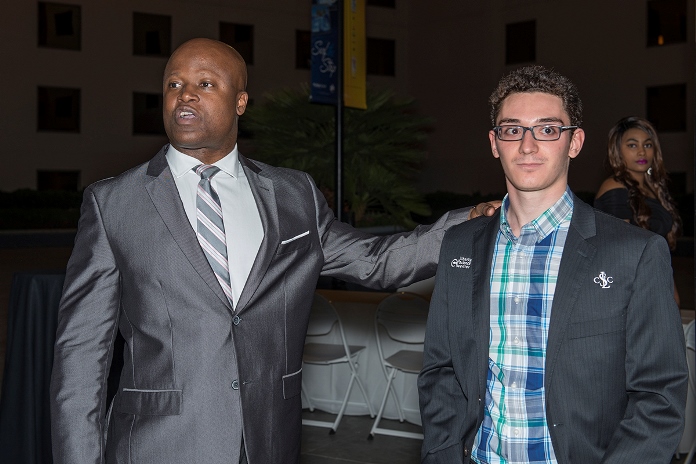 Here’s all you need to know to watch and enjoy this year’s event:

As in 2014, the event takes place in the Planet Hollywood Resort and Casino in Las Vegas. The Opening Party at the Pool Terrace suggested it’s quite a place: 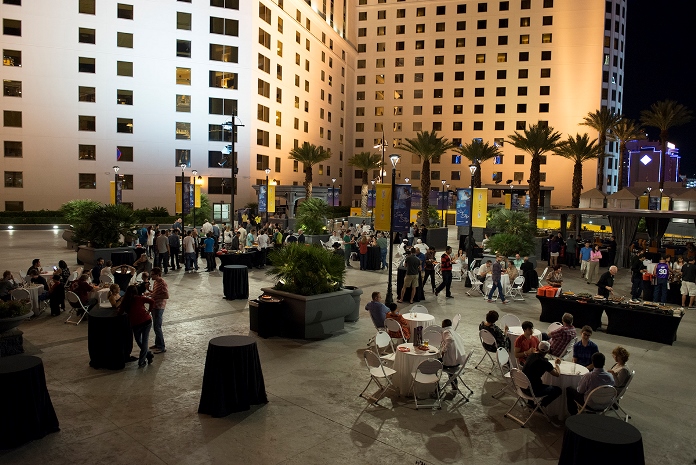 All that seems to be missing from the Pool Party is the pool :) | photo: David Llada, Millionaire Chess 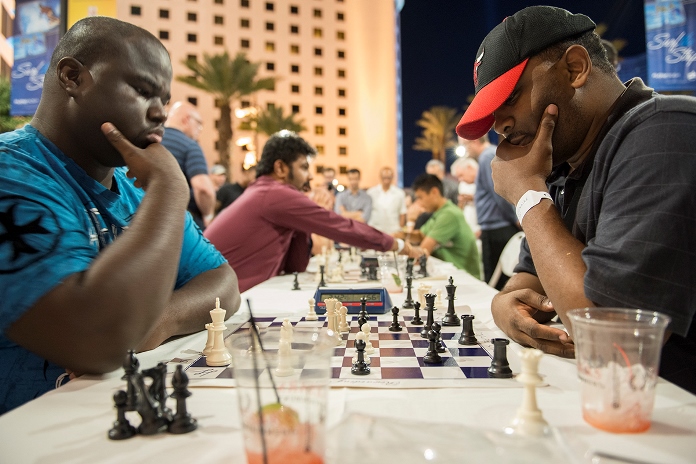 It wasn't only the opening of Millionaire Chess that was being celebrated:

The format and schedule

The main focus for chess fans is the open tournament. That consists of seven qualifying Swiss rounds with a time control of 40 moves in 2 hours and then 30 minutes to the end of the game, with a 5-second delay (common in the US in place of an increment) from move 1. The schedule involves double rounds, and the first time given is in Las Vegas, while the second is for central Europe e.g. Berlin - who needs sleep!

The Top 4 qualify for Millionaire Monday on October 12th, and note that if players are tied on points for one of the Top 4 places a blitz or rapid playoff will be held on Sunday evening.

On Millionaire Monday the Top 4 play semi-finals and a final at rapid time controls, with blitz and Armageddon if required. Those who didn’t qualify continue to play two more rounds of the Swiss tournament to determine the prizes for 5th place and below.

Yu Yangyi was knocked out in the semifinals last year

The format for the Under 2200, U2000, U1800 and U1600 sections is almost the same, except it’s possible to choose to play an accelerated schedule with no play on Thursday and four rounds on Friday – or to play the first two rounds on Thursday, drop out and re-enter the 4-day schedule if you’re willing to pay $400 extra. The tournaments end after seven rounds for everyone except the Millionaire Monday players.

There’s also an unrated section for which there are also seven rounds but no Millionaire Monday.

The scheduling clash with the World Rapid and Blitz Championships in Berlin was very unfortunate, but the 2nd edition of Millionaire Chess has added some real star quality, including the Top 5 US players.

Qatar Masters Open winner Yu Yangyi heads the foreign challenge, with celebrities including the “amateur” Luke McShane, Evgeny Bareev in a new incarnation as a Canadian Grandmaster and 14-year-old US prodigy Sam Sevian. 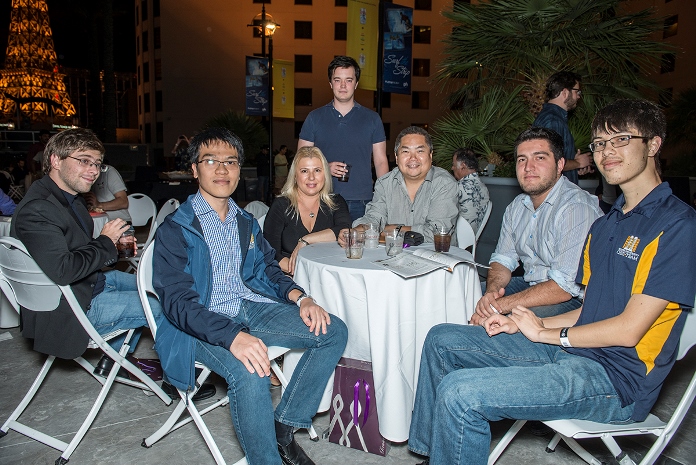 Le Quang Liem, who will be missed in the World Blitz Championship, and Ray Robson head the challenge from Webster University | photo: David Llada, Millionaire Chess

The Top 10, using FIDE’s October rating list, are as follows:

The total number of players for all events will be around 600. 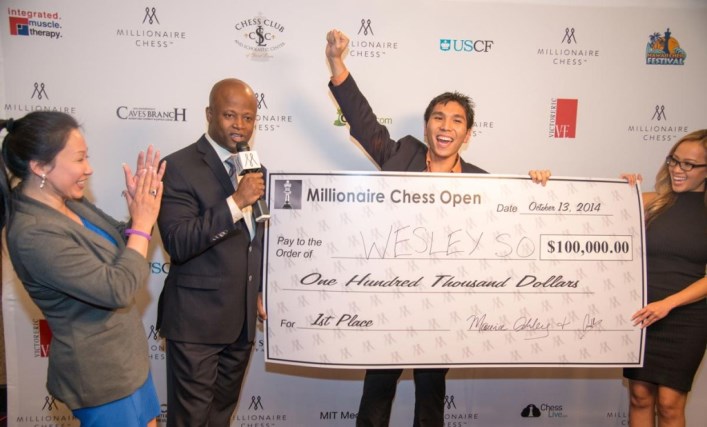 Can Wesley So defend his title? | photo: Millionaire Chess

Those are big prizes for an open, but Millionaire Chess really comes into its own for the lower divisions. The top prizes in the other events are:

Most of those prizes top what’s on offer at all but the most lucrative international opens. More curious prizes include $1,000 for the biggest upset and $100 a day for the best dressed man and woman.

The Millionaire Square Prize will give one of the players who makes it through to Millionaire Monday the chance to pick one of 64 envelopes on a giant chessboard. The envelopes contain prizes, but one of them stands out – if picked the winner will become an instant millionaire!

How will the organisers make money?

There are three answers to this question:

Maurice Ashley explained to The Guardian that the hole in the finances comes from not managing to agree a deal for live TV coverage, though he’s in this for the long haul:

“Our model is based on TV and sponsorship. At the moment TV executives are not convinced it’ll make good television,” said Ashley. “The real win will be when it hits TV. Hopefully we can weather the storm until then.”

Where can we watch?

chess24 will be powering the game broadcast and computer analysis while GM Robert Hess and IMs Tania Sachdev and Lawrence Trent will be combining with Maurice Ashley for what’s sure to be another top quality broadcast. 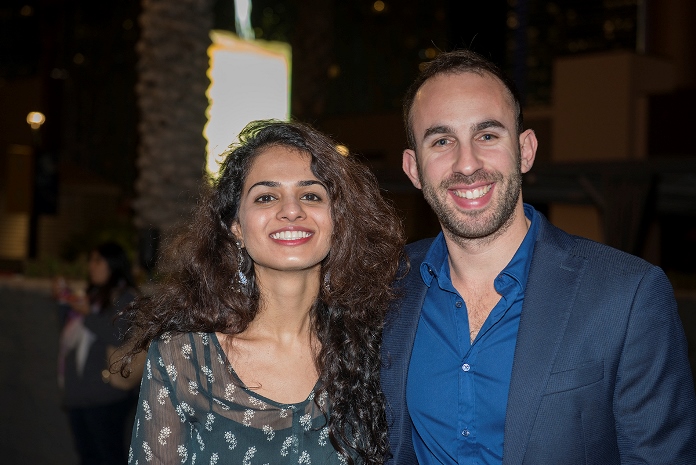 The Tania and Lawrence dream team from the 2013 Anand-Carlsen match in Chennai has been reunited! | photo: David Llada, Millionaire Chess 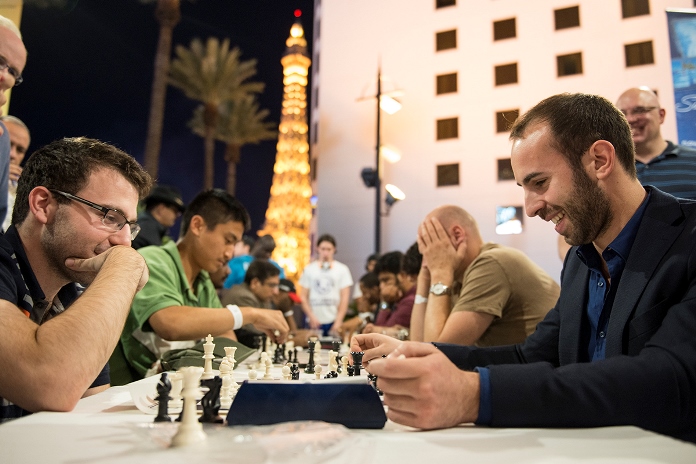 Commentators Robert Hess and Lawrence Trent played a blitz match at the pool party - it's not recorded whether Lawrence was offered rook odds as he was by a certain Norwegian called Magnus | photo: David Llada, Millionaire Chess

You can catch all the action on the official website and here on chess24.