Magnus Carlsen takes on Hikaru Nakamura in the first round as the Chessable Masters starts on Saturday June 20th. Both players are in the A Group for the preliminary stage, where they play each other and Daniil Dubov, Alexander Grischuk, Vladislav Artemiev and Harikrishna twice. The B Group, on Sunday and Tuesday, features Fabiano Caruana, Ding Liren, Ian Nepomniachtchi, Teimour Radjabov, Maxime Vachier-Lagrave and Anish Giri. Eight players will make it through to the quarterfinals. 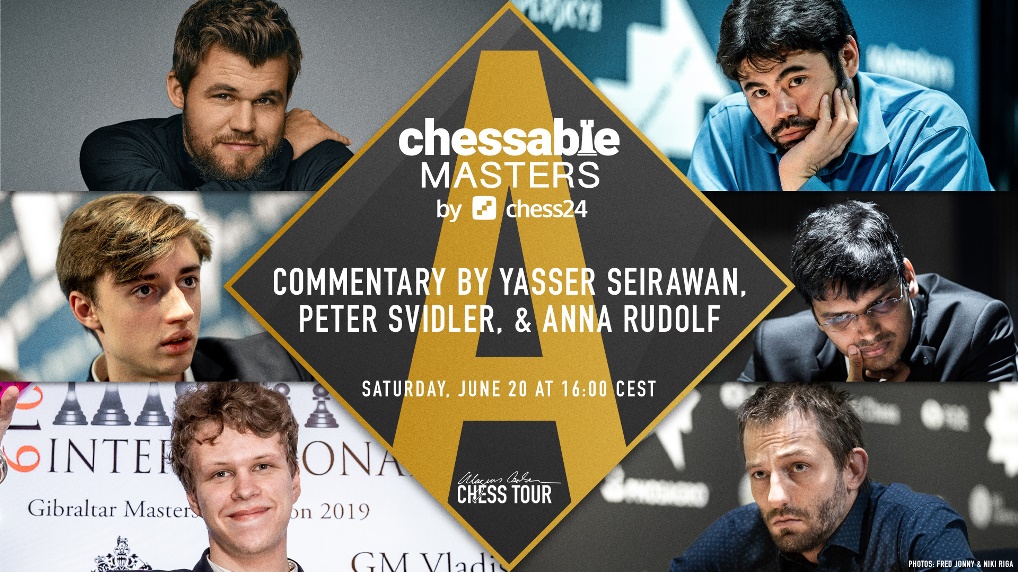 The A Group for the preliminary stage

The Chessable Masters, the third stage of the $1 million Magnus Carlsen Tour, is almost here!

The 12 players, including 8 of the top 10 and the complete top 6 on the world rating list, have been split into two groups for the preliminary stage. This allows them to play on alternating days and to have no more than 3 games live at any time - we felt having 6 games live during the Lindores Abbey Rapid Challenge was just too many to follow! 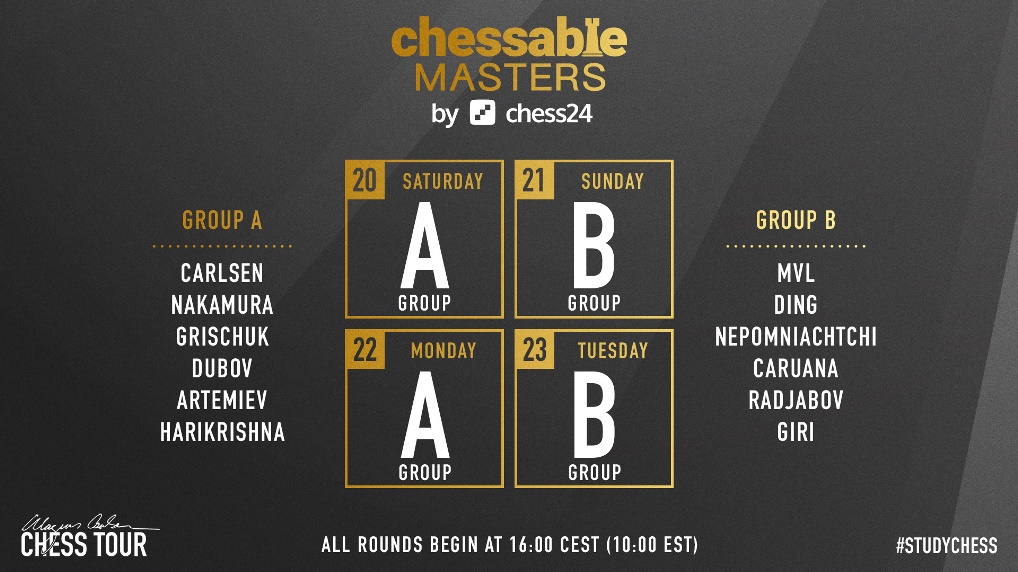 Each player faces the other 5 players in their group twice, with the bottom 2 eliminated before the quarterfinals. We already know the pairings, with 5 rounds of 15+10 rapid chess each day:

As you can see, the A Group features the best performing players on the tour so far - stage winners Magnus Carlsen and Daniil Dubov - as well as Hikaru Nakamura, who was the losing finalist in both the Magnus Carlsen Invitational and the Lindores Abbey Rapid Challenge. Alexander Grischuk is a 3-time World Blitz Champion while 22-year-old Vladislav Artemiev has won multiple Russian rapid and blitz championships. Indian no. 3 and former World Junior Champion Pentala Harikrishna will have his work cut out to qualify from the group, but as we saw in the Lindores Abbey Rapid Challenge, anyone can be in danger. 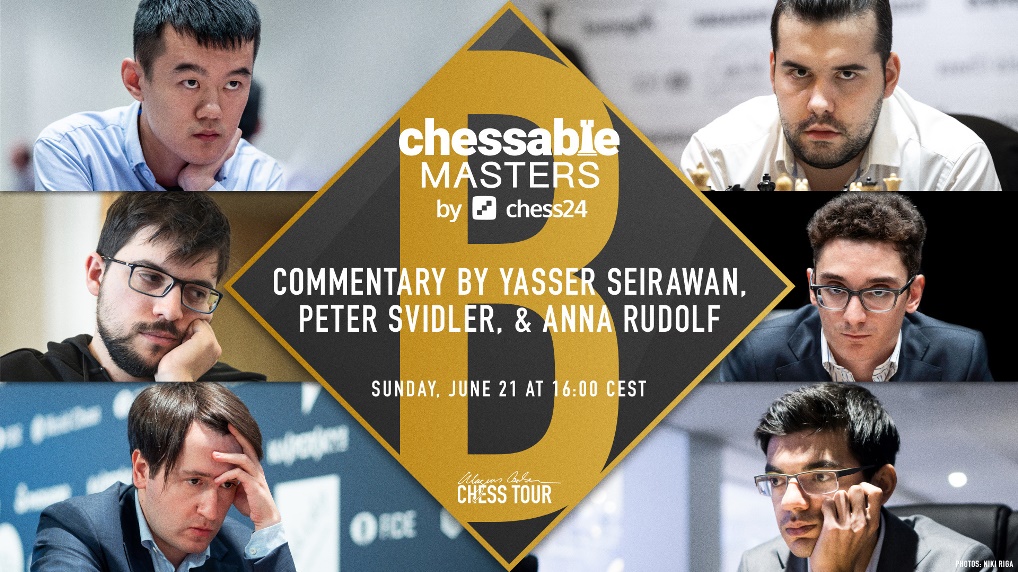 It features five of the players who took part in the Candidates Tournament to decide Magnus Carlsen's next World Championship challenger, including leaders Maxime Vachier-Lagrave and Ian Nepomniachtchi (the event was stopped at the halfway point). They're joined by Teimour Radjabov, who qualified to play before pulling out over coronavirus fears and being replaced by MVL.

Who will succeed here is very tough to predict. On paper Maxime is the top seed in rapid chess, but the French no. 1 has changed his opening repertoire and disappointed consistently since chess moved online, while Fabiano Caruana (who just lost out in the recent Clutch Chess final to Magnus) and Anish Giri (who scored an emphatic victory in the Mr Dodgy Invitational) both seem to be on the rise. Ding Liren came very close to beating Magnus in the Magnus Carlsen Invitational semifinal.

We’ll have live commentary on every moment of the action with Yasser Seirawan, Anna Rudolf, Peter Svidler and more top commentators in English, while we’ll again be broadcasting in 10 languages. You’ll also have a chance to take on the players as they play Banter Blitz sessions during the event, as well as enjoying special offers and more from our friends at Chessable.

We're also launching a new FantasyChess Contest for the Chessable Masters! We'll have more details later in a separate article but you can already start filling out your bracket here.

Then don’t miss all the action live here on chess24 from 15:30 CEST on Saturday!