In Maxime Vachier-Lagrave’s round-up of recent events a curiosity is noted at the end — he realised midway through his 1st game on the final day of the World Blitz that he’d forgotten to remove his watch. If spotted by an arbiter that would have meant an instant forfeit, of the game and potentially the tournament, but a “highly unfocused” Maxime went unpunished and ultimately made a draw. 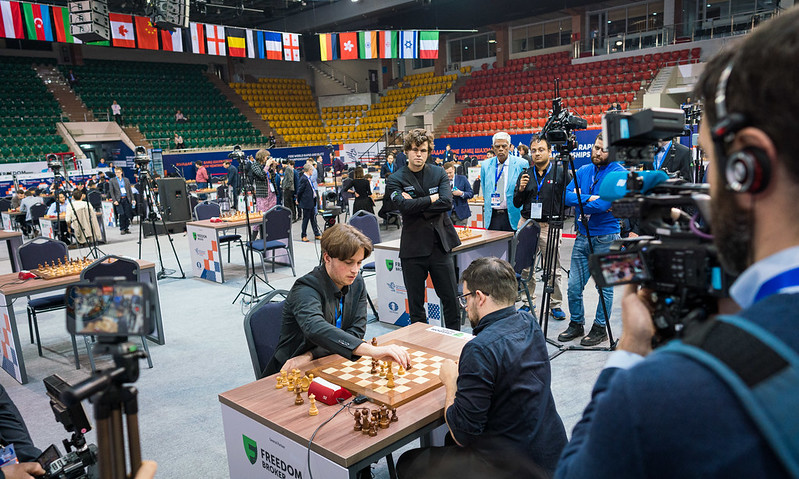 MVL's biggest impact in Almaty was holding a draw against Vincent Keymer in the final round of Rapid, denying his opponent a playoff against Magnus Carlsen | photo: Lennart Ootes

Maxime Vachier-Lagrave’s latest blog post, Looking ahead to 2023!, once again gives an insightful first-hand account of recent events, in this case the World Team Championship, the Chess.com Speed Chess Championship, Danzhou and finally the World Rapid and Blitz Championships in Almaty, Kazakhstan.

It’s a good read, but perhaps the most noteworthy part comes in the editorial at the very end, where it’s revealed Maxime, the reigning Champion, made a mistake on the last day of blitz.

When he arrived for the second day of the blitz tournament in Almaty, Maxime made a mistake that could have cost him dearly… Indeed, he forgot to remove his connected watch before passing the controls, and played the first round against Petrosyan with this accessory. During the game, while raising his shirt sleeves, he realized his mistake but nobody noticed it, neither his opponent, nor the arbiters who were around the boards! The game finally ended in a draw but Maxime was highly unfocused because of this incident, constantly wondering how he could have been stupid enough not to realize it before 😊.

If he had been spotted by the arbiter, he would have obviously lost the game by forfeit… 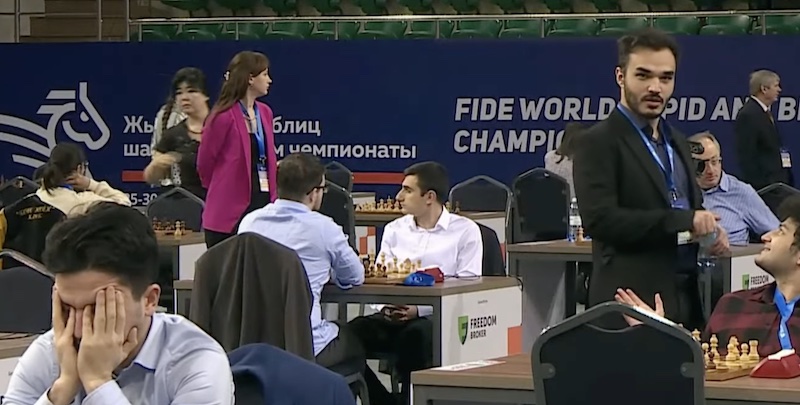 MVL at the start of his game against Manuel Petrosyan, as captured on our live broadcast

For a World Championship event “watches, pens and other writing devices containing metal are not allowed in the playing area”, while a smart watch is clearly a bigger cheating risk. In fact there's a precedent which could have meant Maxime being expelled from the whole event.

In last year's Girls World Junior Championship in Italy, 20-year-old Indian Priyanka Nutakki had gone through metal detectors with earbuds in her pocket. Despite winning her game, the point was awarded to her opponent and she was expelled from the tournament. FIDE explained there was no belief that Priyanka had cheated rather than making an innocent mistake:

An unfortunate incident occurred towards the end of the 6th round of the Girls World Junior Championship in Sardinia. During a routine check, one of the players, Priyanka Nutakki, was found to have a pair of earbuds in her jacket pocket. While there is no indication of foul play on her part, earbuds are strictly forbidden at the playing hall. Carrying these devices during a game is a violation of fair play policies, and it is penalized with the loss of the game and expulsion from the tournament. The point scored by Nutakki in the 6th round has been awarded to her rival, Govhar Beydullayeva. The Indian delegation filed an appeal, but the Appeals Committee reconfirmed the decision. 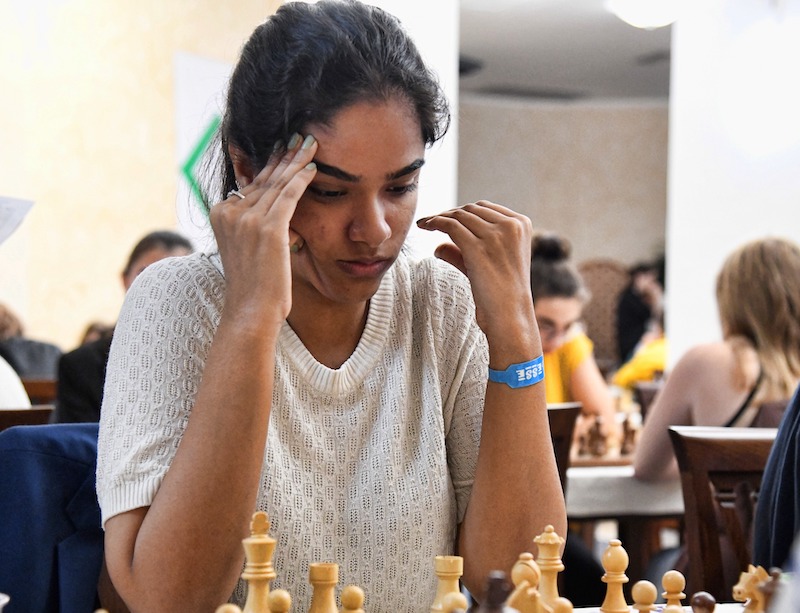 That case was even more remarkable, since the player Priyanka had beaten in Round 6, 19-year-old Azerbaijan WGM Govhar Beydullayeva, went on to win the event.

Maxime’s accidental “crime” is an illustration that anti-cheating measures at such huge events are always going to be imperfect. FIDE CEO Emil Sutovsky boasted about the use of a delay on the transmission of the moves.

It was hard to see, however, how it could be known that the measure had actually stopped any cheating that would otherwise have taken place, or whether there was cheating that went undetected. Of course cheating in over-the-board speed chess, especially blitz, is orders of magnitude more difficult than in classical chess.

The incident perhaps explains the course of the game against 24-year-old Armenian GM Manuel Petrosyan, where Maxime got a close to winning advantage, spoiled it, and then later was objectively lost after 57…h3.

After rejecting a draw against Vladimir Fedoseev in the final round, MVL lost and finished only 31st.

The French Grandmaster, who recently ended a long collaboration with Etienne Bacrot, isn’t expecting to play a supertournament until May, when the Grand Chess Tour begins and we also have Norway Chess (see our 2023 Chess Calendar).

I don’t think I’ll be playing a major tournament until at least May. This is the perfect opportunity to really evaluate what went wrong throughout 2022. Of course I’ve already started, in a new structure that requires a different set-up, approach and working methods.