Maxime Vachier-Lagrave has scored 7.5/9 and hit his highest ever live rating to help his team Clichy regain the French Top 12 Team Championship title. They did it by getting sweet revenge over last year’s victors Bischwiller with a crunching 4:1 victory in yesterday’s penultimate round. MVL, Fressinet, Van Wely and Skripchenko all won, while only Naiditsch scored a consolation win for the reigning champions. 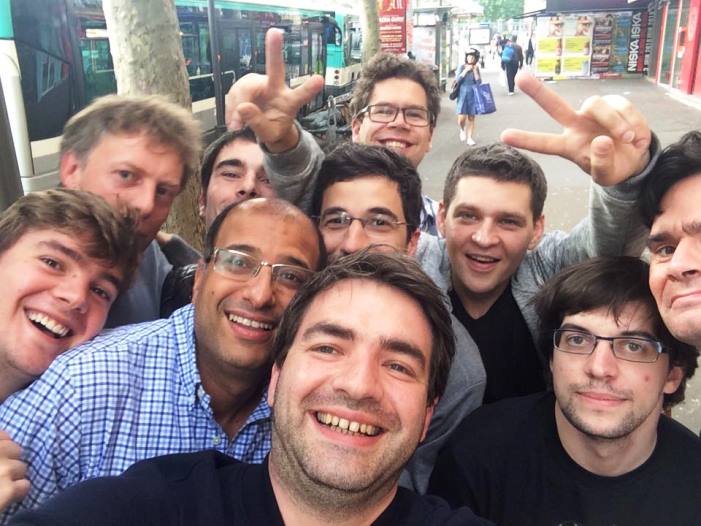 Clichy celebrate with a selfie after winning the French Team Championship for a fourth year in five | photo: Jean-Baptiste Mullon Facebook

This year’s Top 12 French Team Championship is being held in Ladoucette Castle in Drancy, a commune in the north-eastern suburbs of Paris. The single round-robin features 12 teams of up to 16 players, with 8 playing for each team in any of the 11 rounds. You can get a good idea of the atmosphere from the following video:

In sporting terms this year’s event was again a two-horse race, with Clichy and Bischwiller both going into their penultimate round clash on the back of eight wins and one draw. In 2015 Bischwiller had won 2:1 (only victories count for the official scoring), with Anish Giri scoring a crucial win on top board. This year Giri was busy in Shamkir, and Clichy, who had won three titles in a row from 2012-4, eased to victory:

It's curious that Loek van Wely was appearing for his first game of the tournament, Pavel Tregubov also deserves a mention for a run of six wins in a row from rounds 4-9, while Jon Ludvig Hammer was in good form... on Twitter

It was Maxime Vachier-Lagrave who caught the eye, though. The team tactics were to give the French no. 1 the white pieces as often as possible, and with six wins in seven games with White he didn’t disappoint! He’s up to world no. 4 on the live rating list, and hit a new peak live rating of 2795.4 during the event. 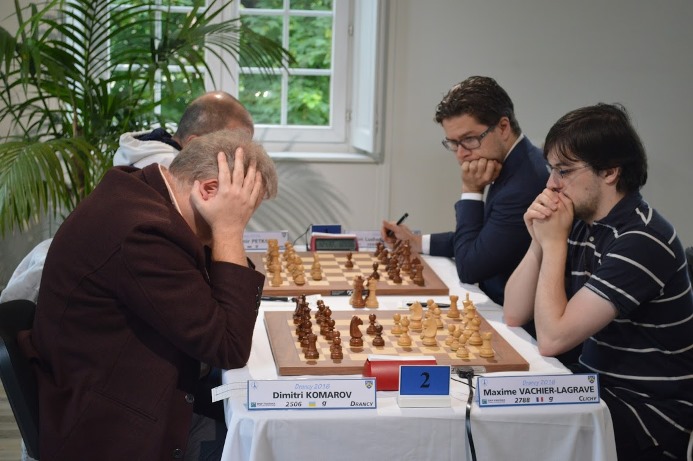 MVL and JLH on the top boards for Clichy | photo: French Chess Federation

For one example of the play of the Champions here’s the conclusion of the game that won Vlad Tkachiev the Carrefour Game of the Day prize in Round 8. Glenn Flear exchanged queens on move 8, but that couldn’t stop a miniature! 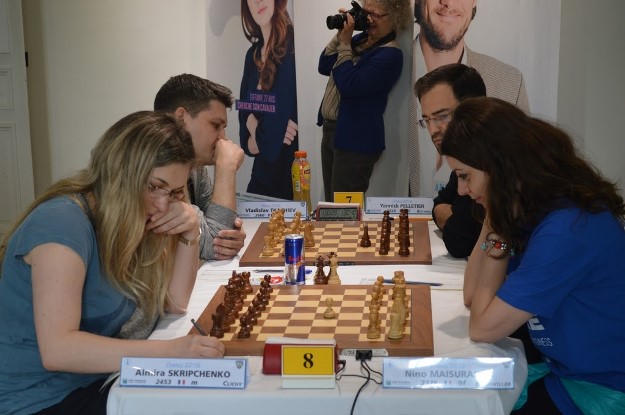 Bischwiller put up a great fight in the event, with Maxim Rodshtein on top board only losing that game against MVL. In 2015 Arkadij Naiditsch lost four games and 32 rating points, while this year he started with six wins in a row, has lost a single game to Michal Krasenkow, and is up 15 points. Sometimes he got a little help, with young German Grandmaster Matthias Bluebaum collapsing with 34.Nd4??

34…Bxc3! ended the game. If everything gets exchanged on c3 the black queen will deliver mate on the back rank.

What remains undecided is the battle for third place. Last year that went to Bois-Colombes, and they proved their strength this year as well by being the one team to hold Clichy and Bischwiller to a draw. The driving force has been the world’s third highest rated junior (behind Richard Rapport and Wei Yi), 18-year-old Polish star Jan-Krzysztof Duda, who’s shown he’s maturing fast with an unbeaten 7.5/10 on top board, including a streak of five wins in six games. 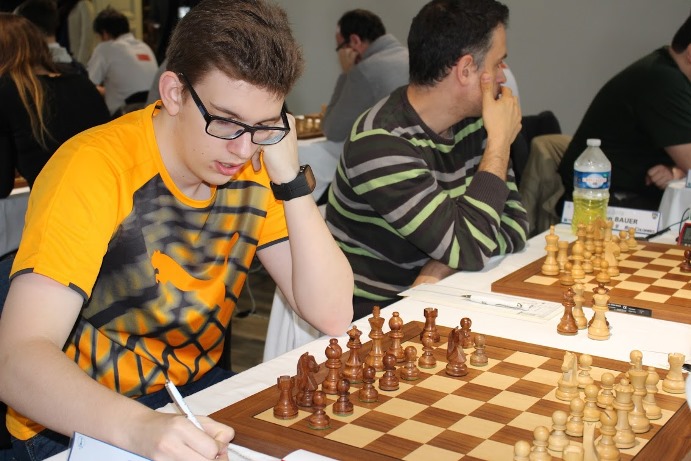 He’s shown a fierce combination of sharp tactics and determined technique, and won the Game of the Day for his Round 7 effort against Andrei Istratescu:

31…Bxe5! was the start of a great battle that the young Pole won in 63 moves.

That was a bittersweet round for Duda, though, since his team lost 2:1 to Mulhouse, who now lead by a point going into the final round. Bois-Colombes’ other loss was a shock 3:4 defeat to Vandoeuvre. That featured a crucial win for our own Fiona Steil-Antoni, who beat the higher-rated Mathilde Congiu in a fine game. That was welcome, since Fiona’s tournament had got off to a very unfortunate start! 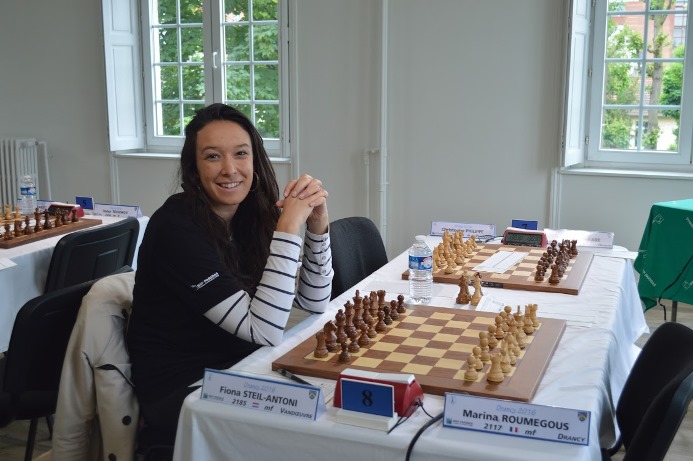 It's been eventful for Fiona Steil-Antoni, who will stay on in Paris to handle social media for the Paris Grand Chess Tour | photo: French Chess Federation

Fiona was outrated by 123 points, but had a win with Black – which would have meant a draw for her team – within her grasp:

White's rook move isn't quite as random as it appears...

Fiona dug in after that, though, with an unbeaten six draws and a win in her following games. Going into the final round of the 2016 Top 12 the standings are as follows:

It’s everything to play for in the fight for third place, since Mulhouse come up against champions Clichy, while Bois-Colombes are favourites to beat Montpellier. Follow all the action here on chess24!