MVL finally gets a win in the French Top 12

Maxime Vachier-Lagrave scored his first win in 94 days and 28 attempts while Sebastien Feller lost his first big game after a three-year suspension as the star-packed Top 12 French Team Championship got underway yesterday. In other action Wesley So was held to a draw while Vishy Anand’s seconds Radek Wojtaszek and Grzegorz Gajewski both lost in a surprise team defeat for last year’s bronze medallists Mulhouse.

As you can see from our 2015 Chess Calendar, the next full-blown supertournament action is in two weeks’ time, when the Capablanca Memorial starts in Cuba (Dominguez, Bruzon, Yu Yangyi, Nepomniachtchi, Andreikin and Eljanov) and Magnus Carlsen and the world’s very best compete in the Norway Chess tournament. 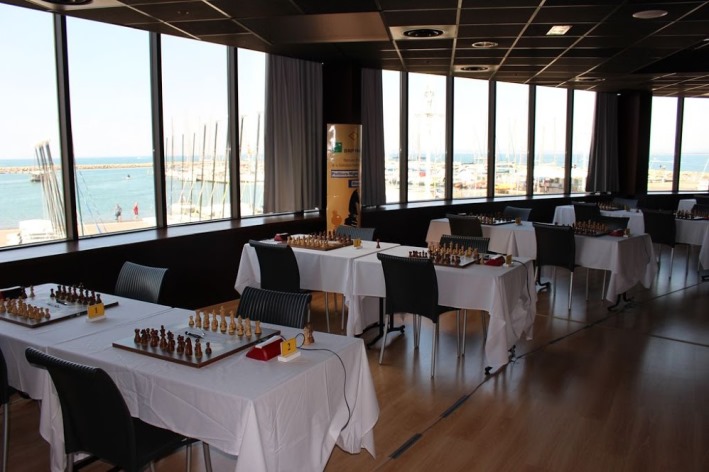 The playing hall is a room with a view of the Mediterranean | photo: French Chess Federation

Chess fans needn’t panic in the meantime, though, since for 11 uninterrupted days the French Team Championship Top 12 will provide a supply of top class chess. 12 teams of eight face off each day in Le Grau-du-Roi on the French Mediterranean coast, in 48 games involving 96 players. As you can see from the first day’s results (click a game to replay it) the teams weren’t resting their star players for Round 1:

Last year’s runners-up Bischwiller eased to a 6.5:1.5 win over Metz, with wins for Anish Giri and Arkadij Naiditsch on the top two boards. 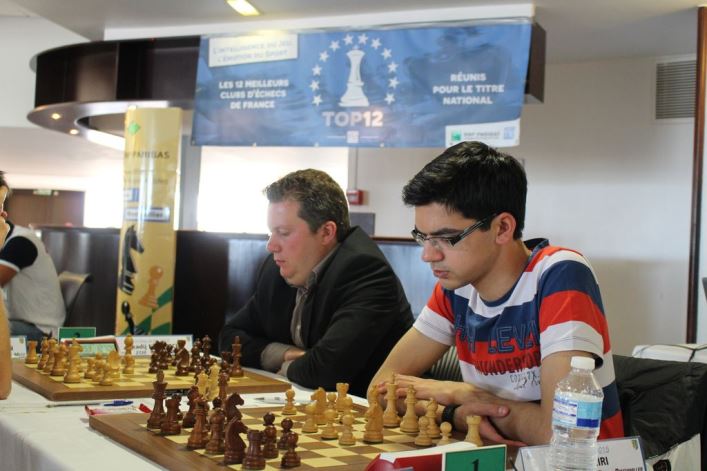 Anish Giri played Viorel Iordachescu, who had commentated on the Dutchman's games over the two weeks of the recent Khanty-Mansisyk Grand Prix. Things soon became creative, as Viorel decided to try and exploit the white king's position in the middle of the board:

In that famous game from the 1956 USSR Championship, future World Champion Boris Spassky was in deep trouble when he resorted to the extraordinary 16...Nc6!?:

Eventually he drew, though Iordachescu couldn't pull off the same feat.

Clichy, the hot favourites to claim a 4th title in a row, scored three wins and five draws in what on paper looks like a straightforward win over last year’s 4th-placed team Bois-Colombes. In fact, though, it was anything but. Wesley So couldn’t get anything on top board against Poland’s 17-year-old Jan Krzysztof-Duda, and only Dmitry Jakovenko made it look easy with a fine win. 31.Bd8! was the finishing touch for the new world no. 11:

After 31…Qxc5 32.Qh5+! Matthieu Cornette resigned since he was staring down the barrel of mate-in-5. 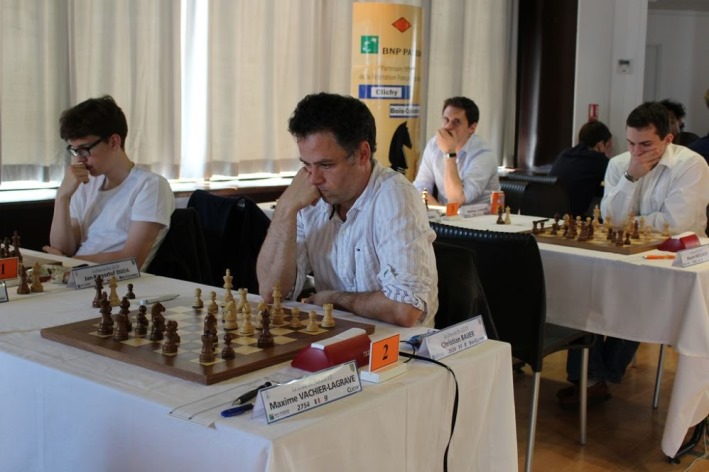 On the other boards at one point it looked as though an upset might be on the cards:

Bois-Colombes on top in three of the four unfinished games

But Maxim Matlakov and Laurent Fressinet managed to draw, while Pavel Tregubov actually won when Sebastien Maze when wrong with 49.Kf4? (49.Rc2!):

After 49…Nd3+ 50.Kf5 Rxg7! Maze resigned in disgust (one imagines), although the computer claims White is only slightly worse after the only move 51.Rc8! 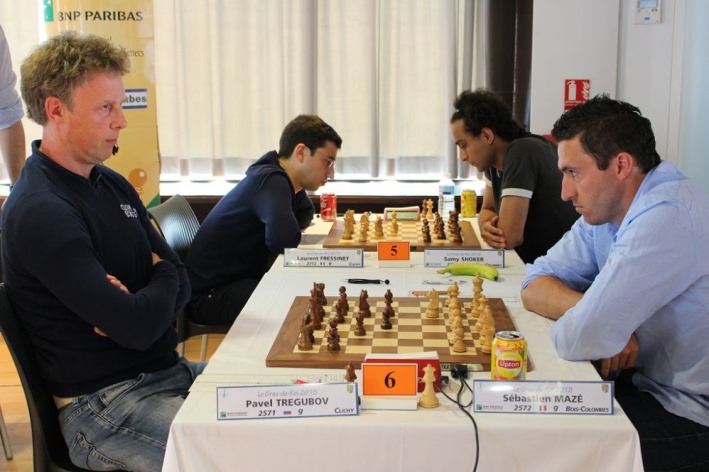 Maxime Vachier-Lagrave’s win against compatriot Christian Bauer was a real adventure. It featured an attractive piece grab from Maxime:

28…Qc1+ 29.Kh2 Qa1 30.Rxa4 Qxa2 If Christian had gone after the black king here (for instance, with 31.Rh4), it seems the game should still have ended in a draw by perpetual check, but after 31.Ra7? Black was in the driving seat. In the end it took 71 moves and some unconvincing-looking technique for Maxime to execute the win.

Nerves were understandable, though! By our reckoning the French no. 1 last won a game of chess against Baadur Jobava in the 9th round of the Tbilisi Grand Prix on February 25th. That’s 94 days and 27 games (20 draws, 7 losses) ago. 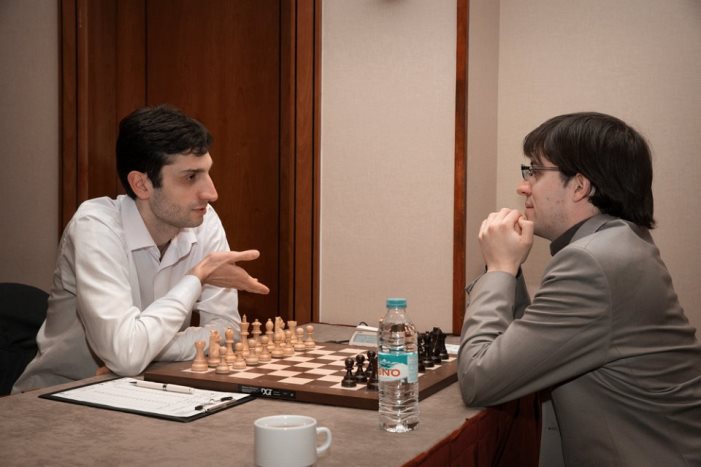 Baadur Jobava had been Maxime Vachier-Lagrave's last victim in Round 9 of the Tbilisi Grand Prix | photo: Maria Emelianova, official website

Another player with an even more unenviable record is Sebastien Feller. He was found to have cheated while playing for France in the 2010 Olympiad, and after torturous FIDE and legal proceedings his last big tournament before serving a suspension was the 2012 Top 12 French Team Championship that started 3 years ago today. The 24-year-old became eligible to play FIDE-rated games again earlier this month and finished 6th in last weekend's Fourmies International Open. He's representing Evry in this year’s Top 12.

His first game, against David Navara, didn’t go entirely according to plan when he played 14.Qd3?

Navara, who recently won the Czech Championship for a 7th time and is up to world no. 12 on the live rating list, responded 14…Nxc4!, which was essentially the winning shot, since 15.Qxc4, as played, ran into 15…Bxf3, while 15.Nxc4 would be hit by 15…Be4. Feller resigned on move 30, but from that point on his day got much better, since his team pulled off a big upset against highly fancied Mulhouse.

Vishy Anand’s Polish seconds had an afternoon to forget, with Grzegorz Gajewski’s 36.Rh6? another curious moment:

It looks almost like a mouse-slip, since after 36.Rxh7+! White is able to force a draw by perpetual check before the a-pawn can do any damage. After the move in the game Sergey Fedorczuk played 36…Nxe4! (36…Rxg2! may have been even better), when Gajewski corrected the mistake with 37.Rxh7+. It was too late, though, and eventually a black rook and knight prevailed against the white queen.

On the next board there was a big scalp for 20-year-old French IM Jules Moussard (2444), who finished 2nd, sandwiched between China’s Yu Yangyi and Hou Yifan, in the 2004 World U10 Championship. He launched a pawn storm against the Sicilian of Radek Wojtaszek (2746), and despite queens being exchanged early on the pawns quickly overran the black position. Wojtaszek put up stubborn resistance but had to concede defeat in 74 moves. 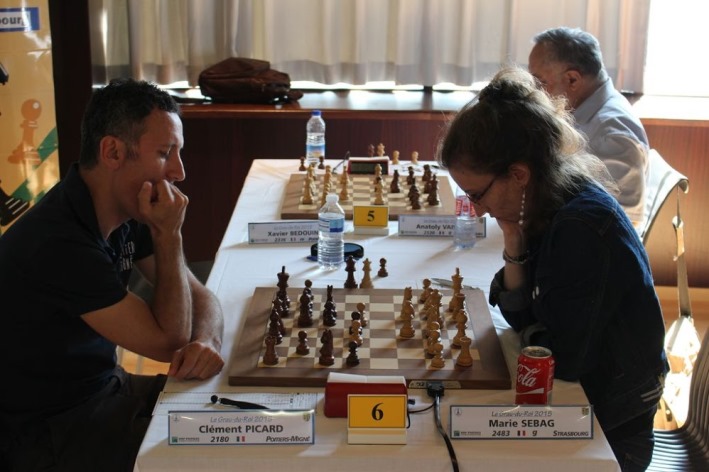 All the teams each day must include at least one female player. Here French no. 1 Marie Sebag scored a win which helped her team Strasbourg to a 5:3 victory over the all-French Poitiers-Migné-Auxances | photo: French Chess Federation

After the first day the action in the next nine rounds starts one hour earlier at 15:00 CEST. Don’t miss all the games here on chess24. You can also watch on our free mobile apps: