Maxime Vachier-Lagrave celebrated his 27th birthday with a win over Ernesto Inarkiev as the 2017-2018 Chess Bundesliga season began on Saturday. Baden-Baden, winners for 11 of the last 12 seasons, duly began with two match wins, though Peter Svidler and Mickey Adams suffered defeats. Jan Gustafsson recaps the opening weekend, which also included a stunning win for 19-year-old Jan-Krzysztof Duda over Pavel Eljanov.

Baden-Baden boast the current world numbers 2-4 in their 18-man ranks, but settled for a line-up headed by world no. 3 MVL and no. 9 Vishy Anand on the opening weekend of the Chess Bundesliga. The all-stars were taking on the nominal 2nd seeds, Schwäbisch Hall, in Baden-Baden.

You can replay all the Chess Bundesliga games here.

The outcome wasn’t decided on the top boards, where a win for MVL over Ernesto Inarkiev was cancelled out by Peter Svidler’s loss to Dmitry Jakovenko, with Vishy Anand falling just short of overcoming Li Chao. The difference, though, was the bottom three boards, where Etienne Bacrot, Arkadij Naiditsch and Rustam Kasimdzhanov just had too much firepower for their opponents to handle: 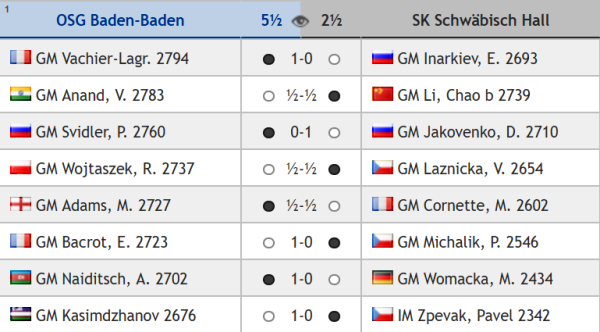 Jan Gustafsson recaps the action from the opening weekend:

As you can see, Jan analysed the moment at which Inarkiev went completely astray, but the seeds of defeat were sown on move 22:

In this position Inarkiev spent a staggering 56 minutes on 22.Qc1!? (22.Qg5 seems both more natural and stronger) and then, after Maxime relatively quickly replied 22…Rc8, he spent another 22 minutes on 23.Qc3!?, leaving himself little time for the play that followed. Birthday boy MVL talked about that and also the final FIDE Grand Prix:

The only plan I should have is to try to qualify for the Candidates and that means I should win in Palma.

You might spot that former FIDE World Champion and Fabiano Caruana’s coach Rustam Kasimdzhanov was the man asking the questions. In his own interview he commented, “it remains my ambition to move up a little bit on the ladder”, since he played and won both days on the bottom board, but if nothing else he got to be interviewed by Maxime Vachier-Lagrave!

The regular interviewer, who had just popped out, was in fact our very own Jan Gustafsson, who was in Baden-Baden mainly as a commentator. He talked to Radek Wojtaszek…

…and also Radek’s opponent Viktor Laznicka (whose bravery in accepting a pawn sacrifice was partly fueled by thinking it was a blunder!):

…and Arkadij Naiditsch, who’s merely in his 11th season with the club:

Baden-Baden are sponsored by GRENKE, who are also sponsoring Schachfreunde Deizisau, a team that was promoted last year and is playing in the top league for the first time this year. It couldn’t be more different than Baden-Baden, who at the weekend managed to field a line-up without a single German player (Naiditsch represents Azerbaijan).

For Deizisau, meanwhile, Peter Leko, a fluent German speaker as he showed in his interview with Jan, was the only non-German to play. Established talents Matthias Bluebaum and Georg Meier are joined by 12-year-old Vincent Keymer, while long term Baden-Baden players Rustem Dautov and Philipp Schlosser have moved to the new team:

When the two teams clashed on Sunday it was too close to call for a long time, with Deizisau taking the lead after everything went wrong for Mickey Adams when he played 25.Rd7? (only 25.e5! could keep the game going):

Alexander Graf was down to his last 3 minutes (to Mickey’s 17), but it didn’t require much time to spot 25…Qf4+! when Rxe4+ would have won the white queen next move if Adams hadn’t resigned first. Peter Svidler made up for a loss the day before, though, by impressively outplaying Georg Meier in an ending, and the three musketeers on the bottom three boards again got the job done for Baden-Baden, who scored another 5.5:2.5 win. 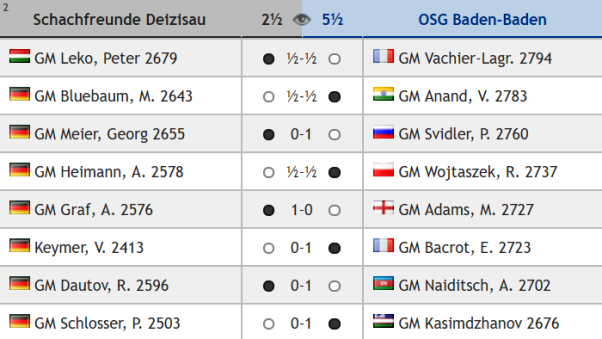 Elsewhere the game of the weekend perhaps came from 19-year-old Jan-Krzysztof Duda, who warmed up for playing for the Polish national team in the European Team Championship by crushing Pavel Eljanov in a game that might challenge for game of the year. It wouldn’t be the first time for Duda, whose win over Grzegorz Gajewski won the prize for the 2015-2016 season. 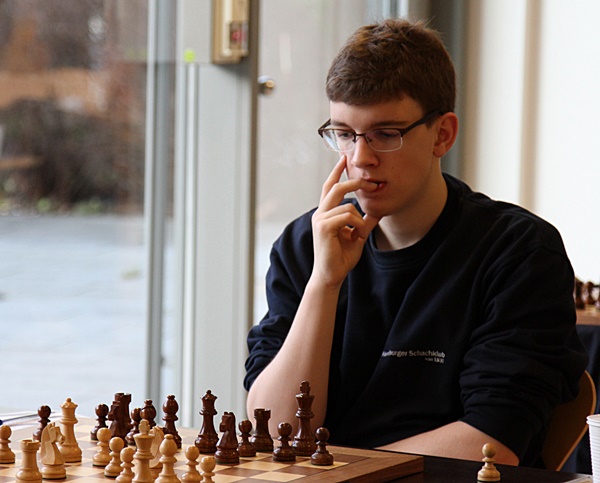 19-year-old Jan-Krzysztof Duda is already a 2700-player and will be hoping for some supertournament invitations in the coming year | photo: Georgios Souleidis, Schachbundesliga website

In a Giuoco Piano Duda played an early g4 and then, with his king still uncastled, went for a piece sacrifice:

14.Nxe5!!? Nxe5 15.Nxd4 and soon Duda was advancing his pawn armada on the black king. As noted by Jan, the moment it was crystal clear Black was in deep trouble was after 27.Rxg5!

27…Nxg5 runs into 28.Qh4+ and in fact here or on the next move the computer considers it essential for Black to try and limit White’s attacking potential by sacrificing material on d3. After 27…Qf7? 28.Qg3 Nc6? 29.Bb3 it was game over, with the final position after 35.Bxe5 one of total dominance:

That game would have meant a win for Duda’s Hamburg team over Dresden if Jonas Lampert had converted a winning position against Roven Vogel in the last game to finish. He didn’t, though, and Jonas had an unfortunate weekend, since he then lost the only decisive game of Hamburg’s Round 2 match against Berlin 1903. 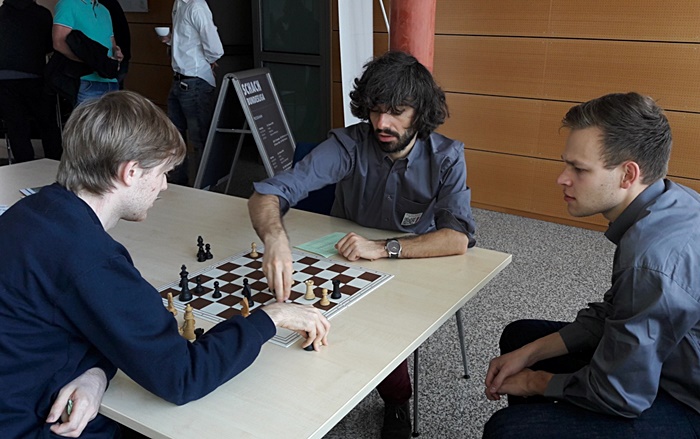 Pavel Eljanov’s weekend also failed to improve, as he was held to a tough draw by 300 points lower-rated Lawrence Trent on Sunday. Lawrence had come within one brilliant move of beating another strong GM on Saturday:

The cruncher was 42.Nf5!!, when White is winning in all lines, but after 42.g5 Polish Champion and 4-time Chess Problem Solving World Champion Kacper Piorun was able to hold a draw.

Lawrence was playing on board 1 for Norderstedt 1975, and it’s noteworthy that on board 2 IM Andrey Ostrovskiy, who does a Training Tuesday show every Tuesday here on chess24, also had a great weekend. On Saturday he beat the dangerous Italian grandmaster Daniele Vocaturo and on Sunday he held 2707-rated Hungarian Zoltan Almasi to a draw.

The next Bundesliga weekend is 11-12 November, after the European Team Championship that starts this Saturday. Jan Gustafsson will also be the official commentator there, but this time in English!