Alexander Grischuk is through to the Moscow FIDE Grand Prix final and up to world no. 6 after winning a hugely complicated second classical game to beat Hikaru Nakamura 1.5:0.5. The Russian’s opponent in the final will be either Ian Nepomniachtchi or Radek Wojtaszek, whose encounter goes to tiebreaks on Saturday after both classical games were drawn, in 26 and then 22 moves. 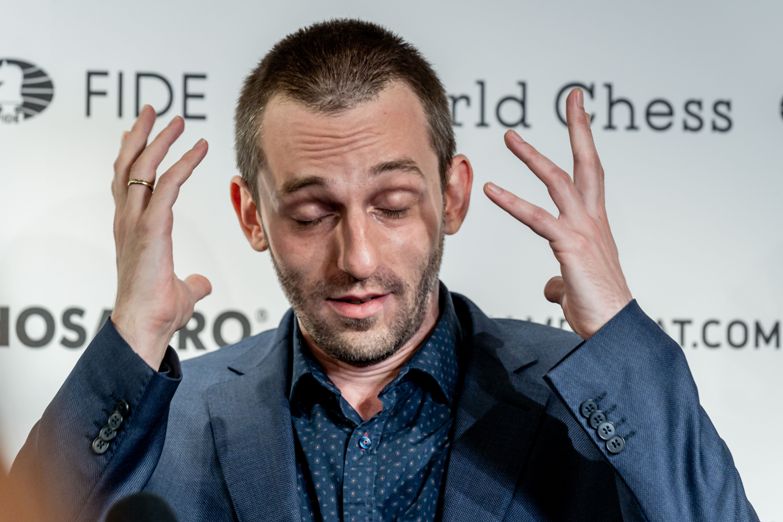 Grischuk's mind was almost literally blown as he tried to calculate a line in the wild game he won against Nakamura | photo: Niki Riga, World Chess

And here's the live commentary on the second day of the semifinals: 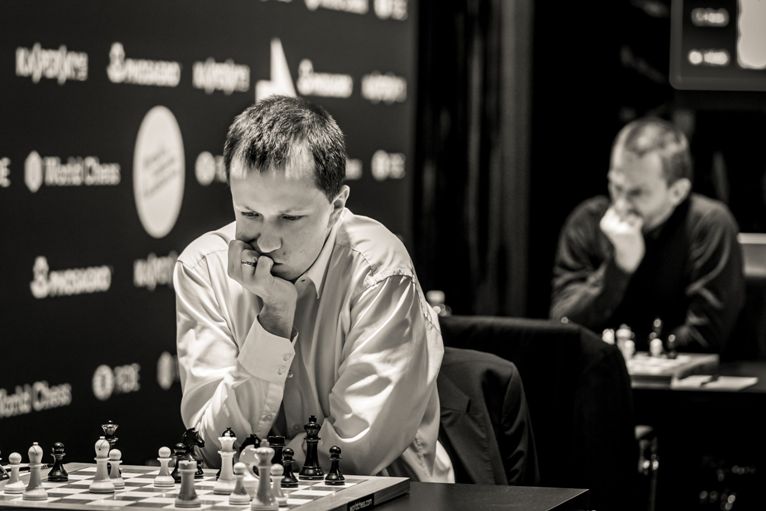 The way the games began on the first day of the semifinals couldn’t have been more promising. Nepomniachtchi-Wojtaszek saw Radek Wojtaszek playing a line of the Najdorf Sicilian that he’d employed against Evgeny Najer in the 2018 European Championship, and that 14-year-old Vincent Keymer had dared to try against Vishy Anand in the GRENKE Chess Classic this year. By move 14 the players were on their own, however, and it was Ian Nepomniachtchi who continued to blitz out moves all the way until we reached move 25:

At this moment Nepomniachtchi had more time than he’d started with while Wojtaszek was within 5 seconds of being a full hour down on the clock. It looked like the dream scenario for White, who had options – the computer suggests creeping bishop manoeuvres such as Bc2-Ba4, while the dramatic 26.Nf5!? gxf5 could definitely have been tried. With best play it seems to be only a draw, but it’s Black who has to prove it. Instead, after 10 minutes’ thought, Ian accompanied 26.h3 with a draw offer, which was accepted.

There was some explaining to be done afterwards, but not everyone was convinced!

Nakamura-Grischuk was even more disappointing from a fan perspective, since their Giuoco Piano had been anything but piano. Nakamura picked up a pawn on move 17, but by the time they reached mutual time trouble on move 35 the black “compensation” had grown to dangerous proportions:

Black’s last move would have been stronger if it wasn’t accompanied by a draw offer. Grischuk noted, “you would need to be crazy to decline a draw here with White,” and Nakamura wasn’t, pointing out that in a 2-game match, “if you lose you’re done.”

Why had Grischuk offered the draw?

First of all, I was worse throughout the whole game. At the end I’m of course at least not worse, this I understood, but I wasn’t sure how I should proceed after 36.Qb1, and it’s extremely concrete, because let’s say White manages Bc1-e3, then suddenly I’m much worse again, I think. I didn’t see a clear way to continue and I just thought, I will offer a draw.

You can watch the post-game interview below:

That will stick in the memory for one moment, when Grischuk unfortunately picked the phrase, “little girls” rather than something neutral and uncontroversial such as “kids”. Still, it provoked some nice responses, including:

The point about having White isn’t that it’s a “psychological” advantage, of course, but a practical one – White scores better in chess. In the case of Wojtaszek-Nepomniachtchi, however, the second game proved a non-event. Nepo commented that Wojtaszek, “maybe chose not the most principled line in the Grünfeld”, and that it was, “never something real”. 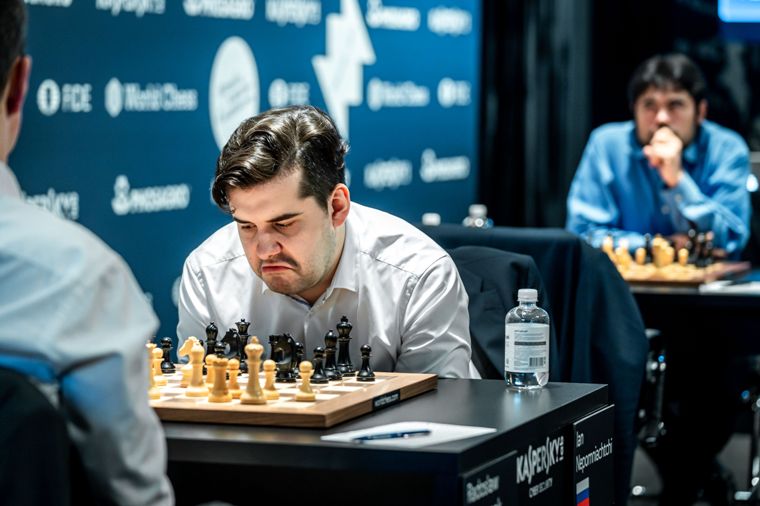 I liked my idea which I played – maybe I have a bit more space, but it’s nothing special, and then I misplayed that and I thought, ok, it’s better to make a draw instead of just starting to drift and having some problems after that.

That game ended in 22 moves, and it could have been a short day at the office. Nakamura repeated a sharp line with Black that he’d played multiple times, including against Ding Liren in Abidjan and already Radjabov and Dubov in Moscow. Grischuk commented:

The opening I sort of expected and not expected, because on the one hand Hikaru played it already like six times, but on the other hand I think it’s a very difficult line for Black, so I was both surprised and not. 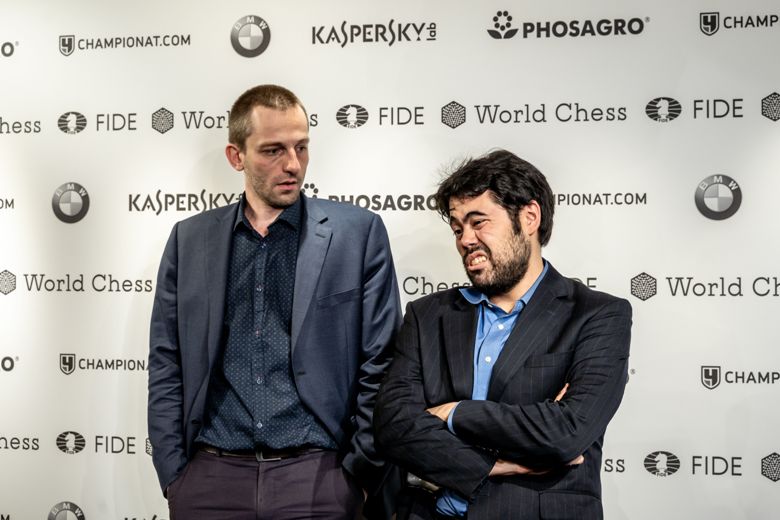 Something that was surprising was that the position after 15.Nxe3 occurred almost simultaneously in the TCEC final between two chess computers – in a game where they were thinking from move one rather than using opening books! 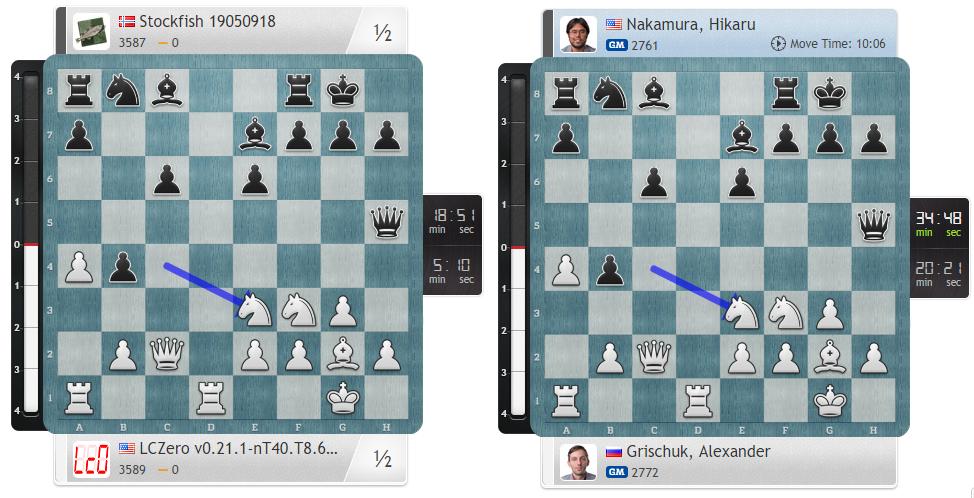 Grischuk gave deep lines as to why 18…Qe5 leaves White on top after 19.Ng4!, but after 18…Qg6 19.Be4 Qh5 20.Bf3 it seemed both games might end in damp squibs. Grischuk repeated once more, but then chose 22.Kg2! and the game went on. Both players began to invest huge amounts of time as the position became critical:

Here, after 20 minutes’ thought, Grischuk played 25.Nb3 with a heavy heart, while it also took Nakamura 20 minutes to reply 25…Kh8, which he later felt was a decisive mistake:

It’s not clear if anything so dramatic happened at this moment (though Grischuk’s suggestion of 25…c5! looks good), but the reason Grischuk played 25.Nb3 with a heavy heart was by far the most entertaining part of the post-game interview!

“I was just like this boiler”, said Grischuk, indicating steam coming out of his ears! As you can see, if that sequence had happened (a big if!), White might still be better, but the calculation would have to continue to determine the likely outcome of the pawn race and potential fortresses for Black an exchange down. 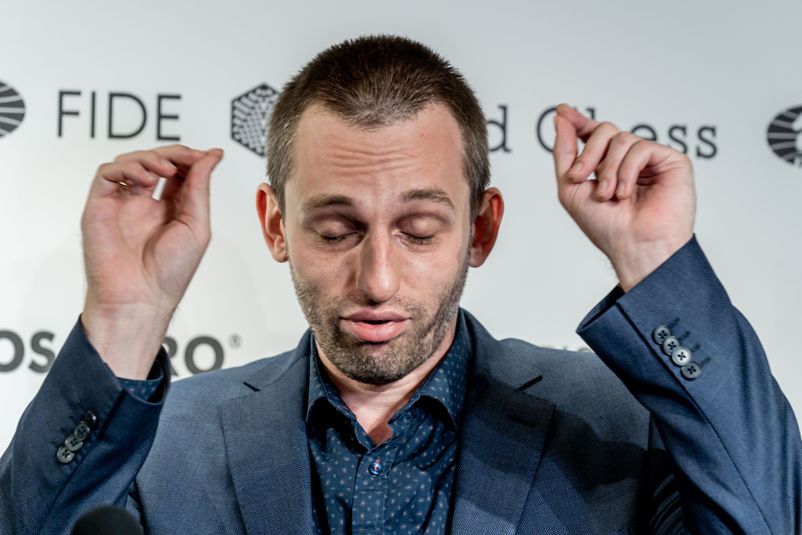 In the game, the climax was another moment where the play of the best humans and the play we at least associate with the best artificial intelligence coincided!

The computer suggests essentially doing nothing here with Black and playing 35…Kg8, but that may be a nuance too far for time trouble. Hikaru instead played 35…Nb6?, which as he later pointed out himself loses to 36.Nxb6. Unfortunately for him, it also loses to 36.Ne5, as played in the game. Nakamura criticised his 36…Bxe5, but nothing else works either, and that was hit by 37.Nc6!

There were various ways the game could have concluded…

…but Grischuk took the most pragmatic route to victory in 54 moves. 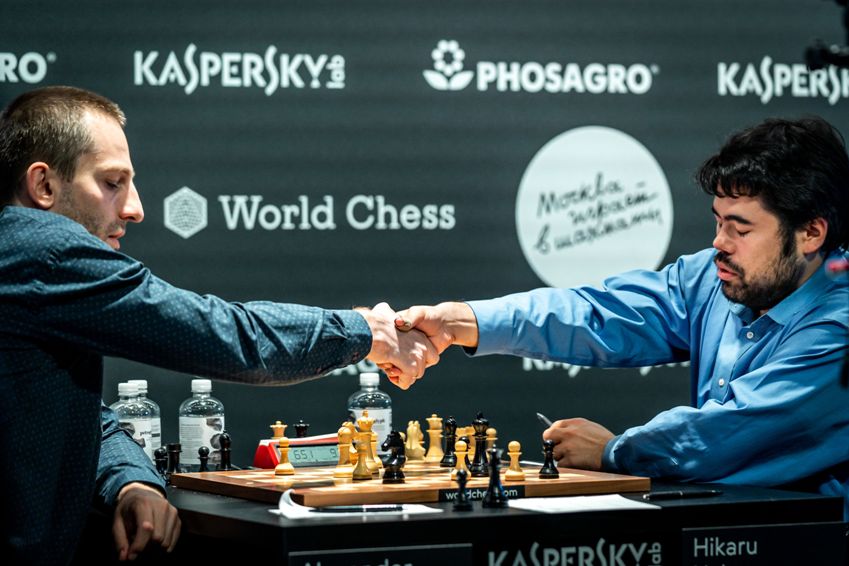 That means Alexander now has not one but two rest days, though he’s planning to catch the Nepomniachtchi-Wojtaszek tiebreaks:

I would watch even if I didn’t play this tournament - I just like watching such events!

The good news for chess fans is that even if there are quiet moments in Moscow we also have a rapid tournament in the Lindores Abbey Distillery in Scotland, where Magnus Carlsen, Vishy Anand, Ding Liren and Sergey Karjakin start playing 30 minutes after the games begin in Moscow. Read more about that here.

Tune into the semi-final tiebreak action live from 14:00 CEST here on chess24!