“That’s what happens when you don’t trust your gut feeling!” was Levon Aronian’s verdict after he demonstrated a beautiful - and correct! - mating attack which he didn’t dare to play at the board. Fabiano Caruana was the player breathing a sigh of relief, and while not a single game was decisive in Round 5 of the Candidates it was only Anand-Nakamura that could qualify as a quiet draw. We take a look at a fast and furious round. 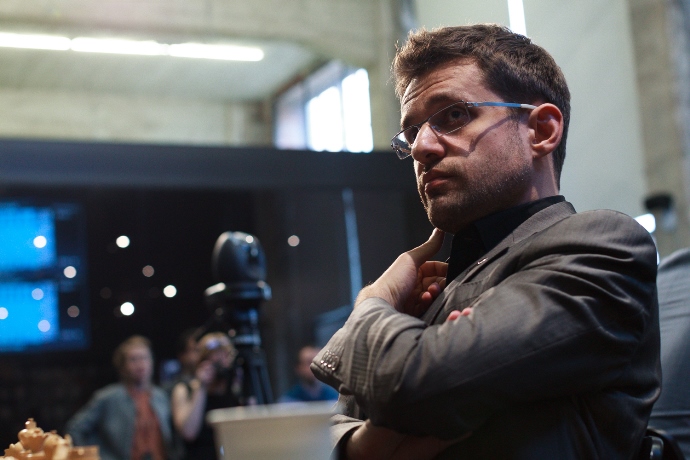 Aronian's many quips included, "that's not my style - I like to mate with pieces and not pawns!" | photo: World Chess

Let’s start with the game of the round: 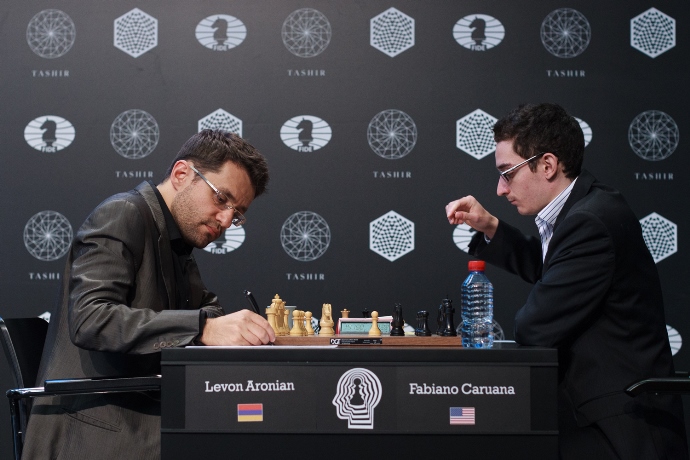 If we’re going to be honest, it’s hard to recommend most of the press conferences in Moscow as particularly enjoyable viewing experiences, but Aronian-Caruana is different! Right from the start the players were in a jovial mood:

Caruana: I’ve been trying to play the Benoni for a long time, but nobody lets me…

Aronian: You have a partner in me! You can always play the Benoni with me.

With its dubious reputation it was curious to see the Benoni played so early in a tournament as important as the Candidates, and it awakened Levon Aronian’s raw chess instincts. In fact, perhaps it let both players cast off the burden of responsibility that the event entails:

Aronian: I got too excited. I decided it’s time to mate my opponent!

What made the press conference a classic, though, was not just the joking and trash talking but that the mating line that Levon showed did indeed lead – if Caruana had followed the computer’s first line – to mate! 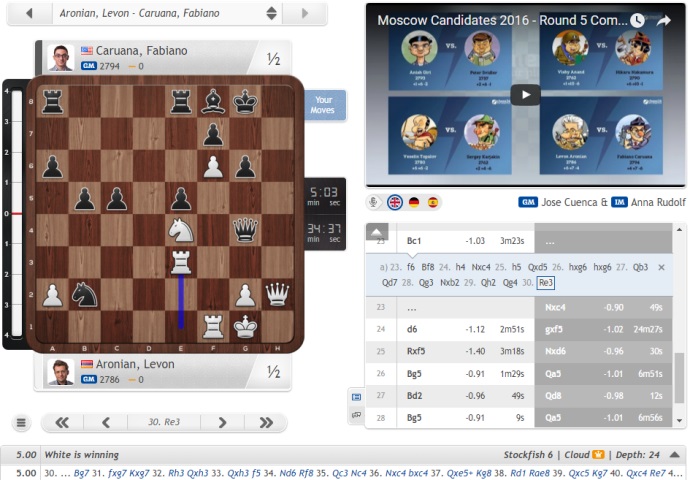 Aronian: "See, I mated you, my friend!" Try entering the line yourself in our broadcast software to see how the computer's verdict changes as it goes along

You can watch the full press conference below:

That’s not all, though! Jan Gustafsson has also analysed the twists and turns of the game for us:

To recover from that excitement let’s briefly check in with the least eventful game of the day: 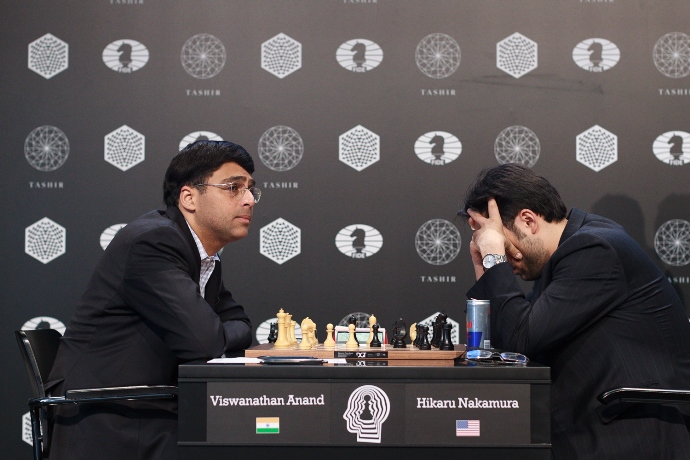 Both players have suffered setbacks in Moscow, but this is a very long tournament with plenty of time to recover | photo: World Chess

Hikaru Nakamura played the Berlin, Vishy Anand replied with the Anti-Berlin (4.d3), multiple pieces were exchanged and, although for a brief moment Vishy seemed to have a slight edge due to a better pawn structure, it almost immediately fizzled out to nothing. The players summed up: “We repeated and made 30 moves at the same time – convenient!”

If you want to see more check out the press conference:

Sergey Karjakin came into this game as the runaway leader, while Veselin Topalov had struggled in almost every game, but you underestimate the Bulgarian former World Champion at your peril. 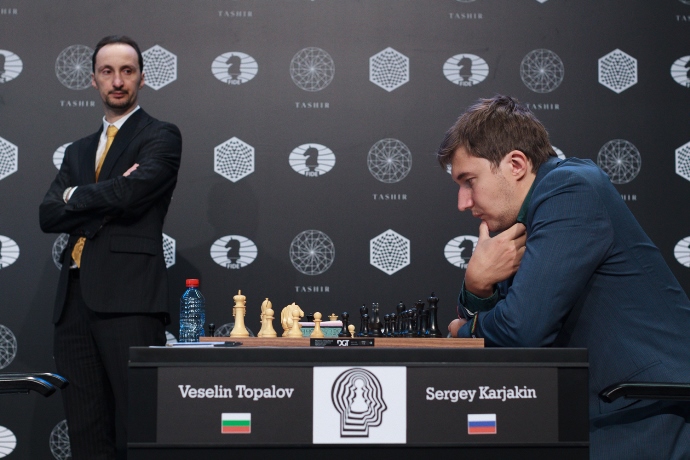 He came very well prepared, with 11.Rb1 already a novelty, improving on (or at least varying from) Giri’s 11.Ne5 against Karjakin in Round 3. Veselin felt Sergey’s response of 11…c5!? was already a slight mistake, though he was impressed by 13…Bd6 (the bishop's odd journey had already included b4, e7 and f8):

This was a curious moment, though. Topalov is famous for his sharp tactical play but here, as in Game 1 against Anand, he passed up the chance to switch to sacrificial play either with 16.Nxd5!? Bxd5 17.Nxf7 (he said he thought it didn't work with the rook on b2) or the immediate 16.Nxf7!?. Neither is as powerful as the blow on f2 he failed to play against Anand, but the resulting positions might have suited his style. Instead he went for the quiet 16.Nd3, although “quiet” perhaps doesn’t do the subsequent sequence of play justice.

Karjakin himself commented, “it was hard for me to understand what was going on”, but with no major errors by either player queens were ultimately exchanged, when Black could start to breathe again.

Watch the post-game press conference to get some idea of what was going through the players’ heads:

Towards the end of the post-game press conference Anish Giri commented, “I’m feeling very proud! Peter decided not to play the Grünfeld and I got him into it anyway!” Svidler was somewhat puzzled his opponent insisted on playing the opening he’s famous for, but decided to take it as “a compliment of sorts”. Anish explained his choice by wanting to avoid what Peter had prepared for the game, since he’d been reading up on our interview with Vladimir Kramnik where the former World Champion concluded that Svidler had been the best prepared player in the London Candidates. 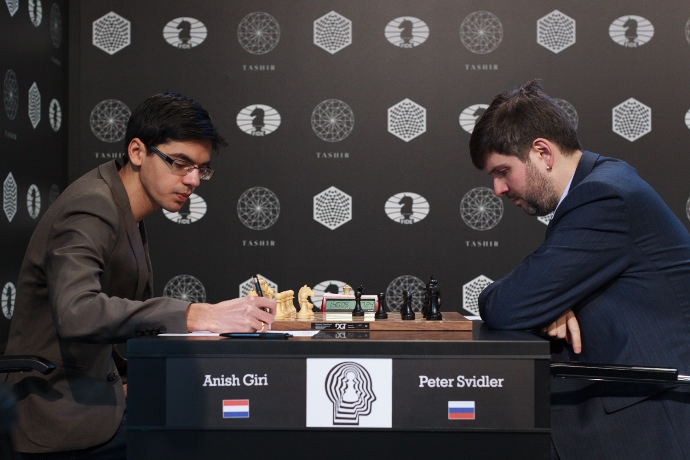 Giri and Svidler were so busy avoiding each others' opening preparation they took some unconvincing turns in the middlegame | photo: World Chess

The respect was mutual, with Svidler drawing on his years of experience to try and find a line that Giri might not have prepared for, and after 11 minutes and 18 seconds he came up with 7…a5. The highest rated game in which that had featured was Tregubov-Svidler, back in 2004! What followed was a curious exchange of inaccuracies that might have proved costly at such a level. First Svidler went for 13…Bf5?! (13…Be6!):

That ran into the game changer 14.e4! (Svidler: “I developed all your pieces for you!”). Two moves later Svidler was surprised by a rook move he’d overlooked and reacted passively, ending up in a dangerous position. He later commented:

I was drifting a bit at this point as I couldn’t believe what I’d done to my position. For a few moves my play was not optimal.

Nevertheless, Black’s position remained resilient and when Svidler managed to play the e5-break things were looking brighter. The game effectively ended on move 23:

For better or worse it was time to take the pawn on a4, while 23.Bf4? was a move Giri immediately regretted:

Once I played it I saw 23…Bd7!, which is absolutely devastating!

Suddenly it’s Black, if anyone, who can claim to be slightly better, but the game was safely drawn by repetition seven moves later. Both players now have five draws apiece, but that's certainly not for wont of trying.

Watch the press conference below:

So we’re now already over one third of the way into the 2016 Candidates Tournament. Sergey Karjakin continues to lead and Levon Aronian is still second, but only Veselin Topalov is significantly off the pace:

We've now got a "normal-length" 9-round tournament ahead of us, with Round 6 coverage starting at 13:00 CET tomorrow here on chess24. Caruana-Karjakin and Aronian-Nakamura are perhaps the key games for the tournament standings.