Levon Aronian delighted his army of fans by beating Veselin Topalov in the only decisive game of Round 3 of the 2016 Candidates Tournament. That meant the Armenian joined Vishy Anand and Sergey Karjakin in the lead, while Topalov’s hopes of a November match against Magnus Carlsen are already hanging by a thread. Elsewhere some stellar opening preparation saw Peter Svidler win a pawn against Hikaru Nakamura, but he couldn’t haul in the full point. 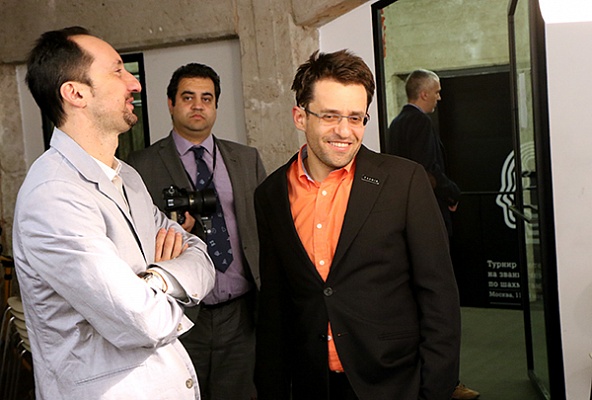 It's not hard to tell from the photo that Aronian won, but you might be surprised that Topalov lost! | photo: Eteri Kublashvili, Russian Chess Federation

The Candidates Tournament is a 14-round marathon, but it’s already looking bleak for former World Champion Veselin Topalov. He delayed his arrival in Moscow until the last possible moment, but maybe that lack of time to acclimatise has taken its toll? He’s now lost two games in three rounds, and despite having the white pieces on Sunday started the press conference (in Russian that was never translated), “In the opening it was bad, very bad…”. 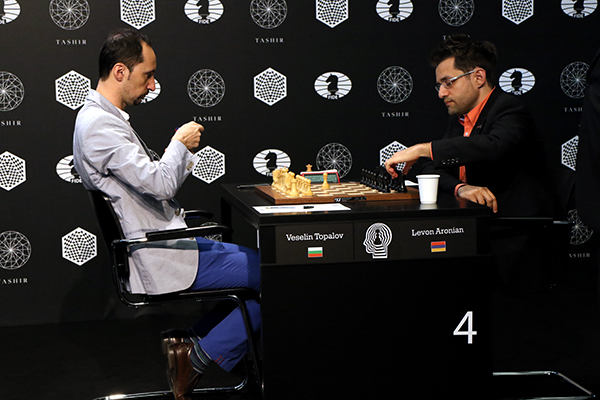 He blundered a pawn on move 17, later dropped another and perhaps the only consolation was that he managed to keep playing longer than seemed likely, though Aronian never made a serious mistake and fully deserved his triumph.

Jan Gustafsson takes us through a day the Bulgarian star will want to forget:

Veselin never seems to let a defeat crush his spirit, though, and made a full contribution to the post-game press conference, which if nothing else is worth watching for Levon Aronian uttering the phrase, “I thought you were kind of seducing me!” 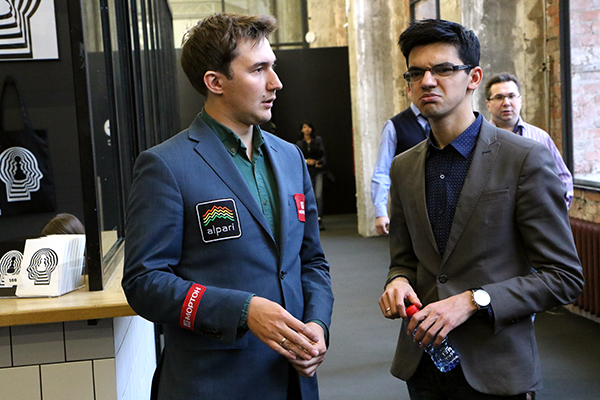 Karjakin and Giri try to make sense of it all | photo: Eteri Kublashvili, Russian Chess Federation

This was a brief but spectacular game that involved a strange curiosity. Sergey Karjakin chose to go for the same line as his opponent Hikara Nakamura had the day before, with the positions identical after 10 moves. Karjakin had of course beaten Nakamura in that line, which caught Anish Giri off guard:

I thought he won so nicely he’ll never play it again!

The similarity continued when Karjakin again pushed his h-pawn two squares, not to h4, but h5, which Giri complained “confused me tremendously”. And then, sure enough, Karjakin’s opponent again sacrificed a knight for the weakened g-pawn!

26.e4!? was the try for more, but Giri said he was put off by the number of potential continuations for Black. Instead he went for the spectacular sacrifice 26.Nc5!?, to open a path for the b2-bishop, but after 26…bxc5 27.dxc5 Rf8 he forced only a draw by repetition with 28.Qh6+ Kg8 29.Qg6+ and so on – allowing the “haters” to quip that Anish is so desperate to draw he’s even willing to sacrifice two pieces to do it!

Watch the players talk about an exciting encounter:

Vishy Anand again seems to have come to a Candidates Tournament highly prepared and in excellent shape, which is bad news for his opponents. Against Fabiano Caruana he managed to make real headway, but felt his 30.a4?! was “bad judgment” and that his exposed king (Fabiano sacrificed a pawn to break open the white position) made playing for a win later difficult. 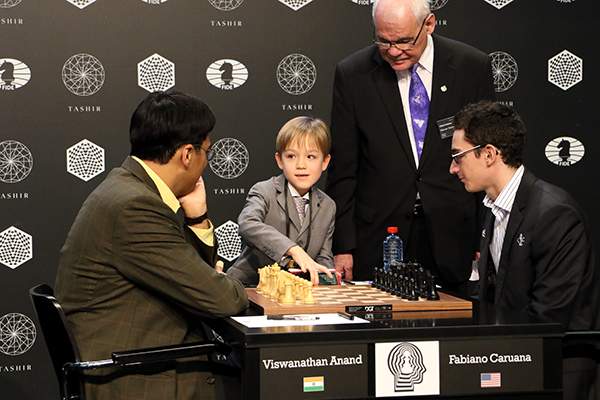 7-year-old Moscow chess star Timur Azimov got to start the clocks for the former World Champion and one of his potential successors | photo: Eteri Kublashvili, Russian Chess Federation

Watch the press conference below:

Hikaru Nakamura, one of the favourites for the event, came within a whisker of finding himself in the same predicament as Veselin Topalov – losing a second game in three, this time with the white pieces. 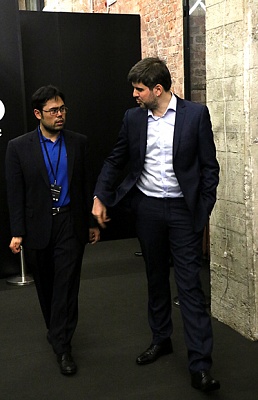 Nakamura at least had the excuse of coming up against some excellent home preparation, with Svidler proud to find 17…Bf6 rather than the obvious 17.Bb7:

I was very happy when I found the line I played today because, somewhat surprisingly in modern chess, this is not the first line [of the computer] and also, in the beginning, the machine gives White a reasonably large advantage. So I thought people will probably ignore this and will not be as prepared after this as they might be.

This looks like a blunder as Hikaru was now able to play 18.d5 Qc7 18.d6 and then exchange off the bishop on f6, but Svidler had analysed it all and concluded that Black is no worse. The pawn made it one square further to d7, before 26.Qh7!? finally took the 7-time Russian Champion out of book:

Svidler was left in a quintessential position for a modern chess player: he knew the move on the board wasn’t one of the two best options (26.Be2 or 26.Bc2) considered in his preparation, but was left to figure out why. He managed, and with 26…h5! he went on to successfully win a pawn, ultimately ending up in a rook and knight ending with four pawns vs. three on the same side of the board. He could have played that ending for a very long time, but instead was tempted to go for a pure rook ending. That was perhaps a dubious practical decision, but on the other hand, it seems it may have been winning!

54…Kf5! was the winning try, with Svidler later lamenting:

I was completely autopiloting because I had no idea what was going on and I was slowly losing my mind.

He dismissed the potential winning move as a clear draw, while after 54…Re2? 55.h4! there really was no play left in the game. Don’t miss the players’ press conference if you want to see more about how Black might have scored a vital win:

Two of those leaders, Karjakin and Anand, will meet in Round 4 on Tuesday, when the action again starts at 13:00 CET.