Moscow Candidates, 1: Anand off to a flyer

Can Vishy Anand confound the doubters yet again?

Former World Chess Champion Vishy Anand scored the only win on the opening day of the 2016 Moscow Candidates, beating Veselin Topalov. It was a complicated game where the Bulgarian allowed a good chance to seize a clear advantage slip through his grasp on move 20. The remaining encounters ended in draws, but not without a fight, with Anish Giri coming closest to drawing blood against his opponent, Levon Aronian. The Armenian defended a difficult rook ending with great precision.

On Friday at 3pm, Moscow time, the long-awaited first round of the Candidates began. The 14-round 8-player tournament will decide who plays a World Championship match against Magnus Carlsen this November in New York. In recent years the Candidates Tournament system has come back into fashion and we've been treated to some truly spectacular events. Luckily for us, the first round lived up to that billing.

Topalov has a word with the arbiter before the start

The game of the day was a win for Anand over Topalov, but it could all have been very different if, after a great opening, the Bulgarian had gone for the powerful blow at his disposal on move 20:

A tough loss for Veselin Topalov that complicates the tournament for the Bulgarian, but of course with no less than 13 rounds to go he’s far from out of it! One of the virtues demonstrated by the ex-World Champion, besides his fighting spirit, is an extraordinary capacity to recover after defeats. In Round 2 he has the tough test of Black for a second game in a row, this time against Peter Svidler.

From the remaining games it’s worth highlighting the vivid battle between Anish Giri and Levon Aronian. The talented Dutch player approached the game in his trademark style: a subtle idea in the opening (17.Ne1) and then, after some exchanges, he steadily applied pressure. Levon managed to keep afloat, but was unable to equalise completely. In the critical moment the Armenian responded with precision:

The white rook is more active than Black’s and the white king seems to be on an unstoppable course to penetrate the black position, either via b4-b5 or d4-e5. Levon, however, found two fine moves that drew on the spot: 51.Kc8! 52.Rxb4 (52.Kxb4 doesn’t work due to 52…Rb7 and the ending is drawn) 52…Rf4! reaching a pawn ending in which appearances are deceptive – White can only draw. Check it out in our advanced broadcast system, where you can make your own moves on the board.

In the all US and Russian encounters Sergey Karjakin surprised Peter Svidler in the opening with the white pieces, but was unable to pose real problems, while Hikaru Nakamura and Fabiano Caruana engaged in a complicated fight where Hikaru reached an advantageous ending…

Hikaru played the imprecise 24.Nc4, which allowed 24…Na4! since the c-file is blocked for the white rook. Instead he should have played with the idea of combining the advance of the d-pawn with the astute manoeuvre Nb5-a7-c6, in order to hit both the rook on b8 - seriously weakening b6, and the d8-square. That small detail enabled Caruana to escape from the pressure Nakamura had been applying since the start. 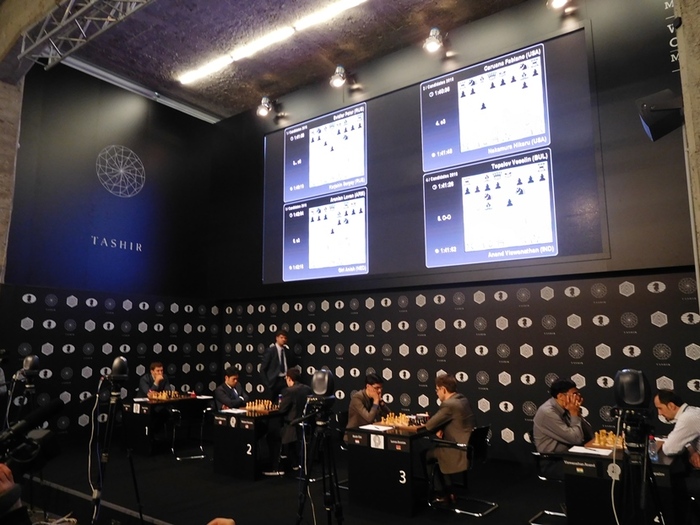 The stage is set for the 2016 Candidates Tournament

Don't miss all the games with commentary and computer analysis here on chess24, with Round 2 again starting at 13:00 CET. You can also watch the games in our free mobile apps:

Eight players and only one place that matters! Don’t miss our coverage here on chess24.

You can also watch the games in our free mobile apps.