The 50th Biel Chess Festival has brought some chess legends back into the limelight, with former champions Anatoly Karpov and Vlastimil Hort playing in the opening rapid knockout, while 65-year-old Rafael Vaganian is playing in the main 10-player round-robin. Perhaps the highlight so far, however, has been 3-time Champion Alexander Morozevich. He’s played three spectacular games, even if his sacrifice in Round 1 backfired against Hou Yifan, who currently leads with Ruslan Ponomariov and Etienne Bacrot. 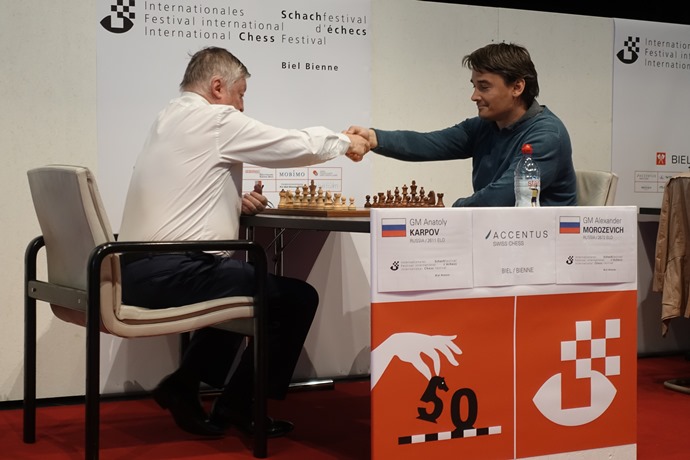 Before the main event of the 2017 Biel Chess Festival got underway we had the ACCENTUS Rapid Tournament, an 8-player knockout that saw modern elite players coming up against some chess legends. They were young and hungry once, as you can see in this documentary from 1975, where Anatoly Karpov plays training blitz games against Rafael Vaganian in preparation for the World Championship match that never took place against Bobby Fischer. Their blitz starts at around 2:45, while if you want a transcript of the whole documentary check out this article:

In 2017 the romance didn’t last long, with all the legends losing in the quarterfinals. Vaganian was beaten up by Pelletier, Hort blundered into mate against Harikrishna and Karpov lost on time to Morozevich in a roughly equal position. 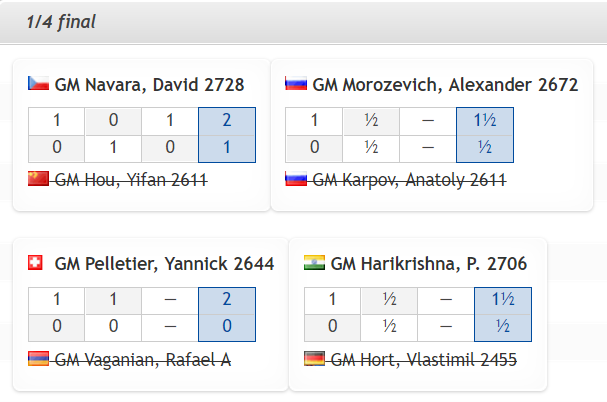 The 10 minutes + a 5-second increment time control was somewhere between rapid and blitz, with a tied 2-game match to be settled by Armageddon. The only time that was needed was in the Hou Yifan-Navara match, when after being beaten soundly in Game 1 Yifan hit back with a vengeance in Game 2. Navara has just tempted White to pick up a pawn on h6, which she did, since she’d seen that after 20…Kg7 the knight by no means had to retreat:

21.Ng5!, when of course 21…Kxh6 would lose on the spot to the 22.Nxf7+! knight fork. The women’s no. 1 kept finding little tactics until she won in 37 moves and had forced Armageddon. That was the end of the road for Hou Yifan, though, since Navara had White and won smoothly both on the board and on the clock.

Hou Yifan would have the last laugh in her classical game against Morozevich | photo: Biel International Chess Festival

In the semifinals Morozevich’s luck ran out, since this time he was the one to lose on time, to Navara. In the other encounter Harikrishna beat Pelletier 2:0 to set up the final the players’ ratings predicted. Navara emerged victorious after winning with White when Harikrishna's defences were broken down:

To put up any resistance Hari had to go for 33…Rxa5, but it’s understandable 34.Nb3! didn’t appeal to him. Instead after 33…Bc4 White had two open files and could play 34.Rb8+ (it doesn’t matter which rook starts) 34…Kh7 35.Ree8 and there’s no way to stop mate. Navara held comfortably in the second game with Black to win the tournament. 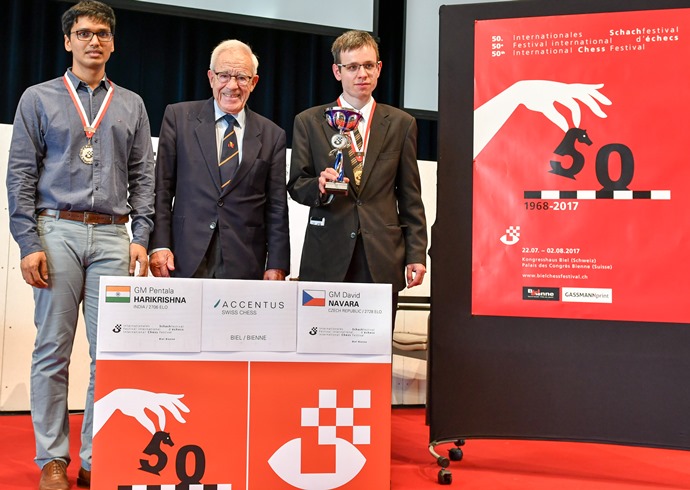 Navara got off to a flying start in Biel | photo: Biel International Chess Festival

You can replay all the rapid games using the selector below:

The players in the 50th Biel Chess Festival GM tournament outside for the traditional photo in the Swiss town of Biel/Bienne | photo: Biel International Chess Festival

This year’s main Biel tournament is a 10-player round-robin, a welcome return to a tournament formula after last year’s Maxime Vachier-Lagrave vs. Svidler match. Defending champion MVL is absent, as are other Top 10 stars, with the top seeds 2737-rated world nos 21 and 22 Navara and Harikrishna. The line-up is an interesting mix, though, with the women’s no. 1, former elite tournament regulars Ponomariov, Leko and Morozevich, Bacrot, two young Swiss players and, of course, Vaganian. 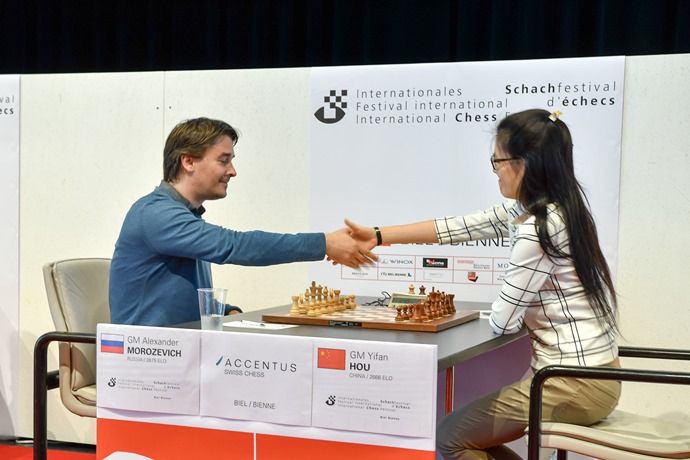 The Armenian player started impressively with two draws in three games, but all eyes have been on Morozevich. In Round 1 he surprised Hou Yifan on move 17:

17.Nxd5! looks to have been a correct sacrifice, though gradually after 17…exd5 18.e6 Nf8 19.exf7+ Kxf7 20.h6!? Morozevich began to lose the thread and got ground down. He noted afterwards that his time handling had let him down, as he was unable to navigate the complications. 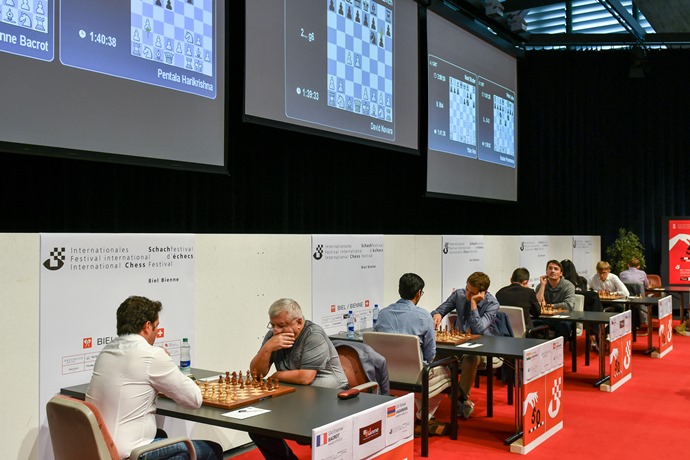 The players on stage in Round 2 - Bacrot went on to inflict Vaganian's only loss so far, in a razor-sharp theoretical duel | photo: Biel International Chess Festival

Things looked bleak for Morozevich as he faced top-seed Navara with the black pieces in Round 2, but he played a line of the Benoni he said he’d looked at 4-5 years ago and soon had the advantage. He even got to play another knight sacrifice on d5!

23…Nxd5! Obviously the knight can’t be taken, while an attempt to regain the pawn with 24.Rxc4 runs into 24…Bb5! immediately, or even better after taking on f4 first. Morozevich didn’t put a foot wrong and afterwards talked to Danny King, explaining why it’s true that he hadn’t played a single classical game this year. If you’re an elite tournament organiser it’s worth noting the maverick Morozevich is open for invitations!

In Round 3 all games were drawn, but again Morozevich was involved in a brawl, this time against co-top seed Harikrishna. After 32.Nc7 it seemed he might be winning… 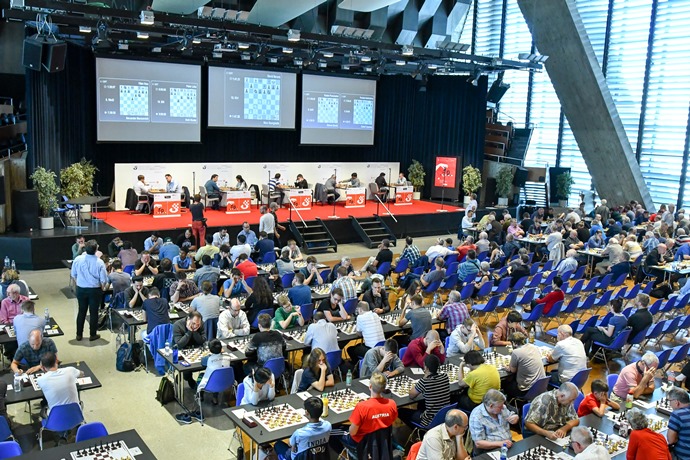 As always the top players are competing in the same hall where the other tournaments are held | photo: Biel International Chess Festival 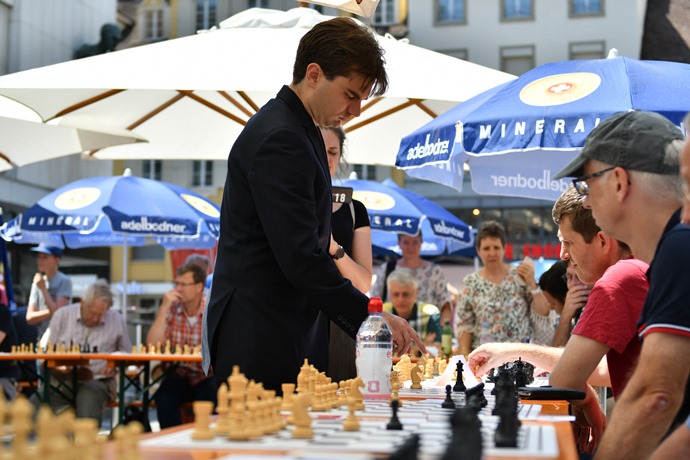 After three rounds the standings are as follows, with a trio of leaders and no-one suffering a complete collapse:

The tournament continues at 14:00 CEST on Thursday in Biel. Don’t miss the games here on chess24! You can also follow the games in our free mobile apps: