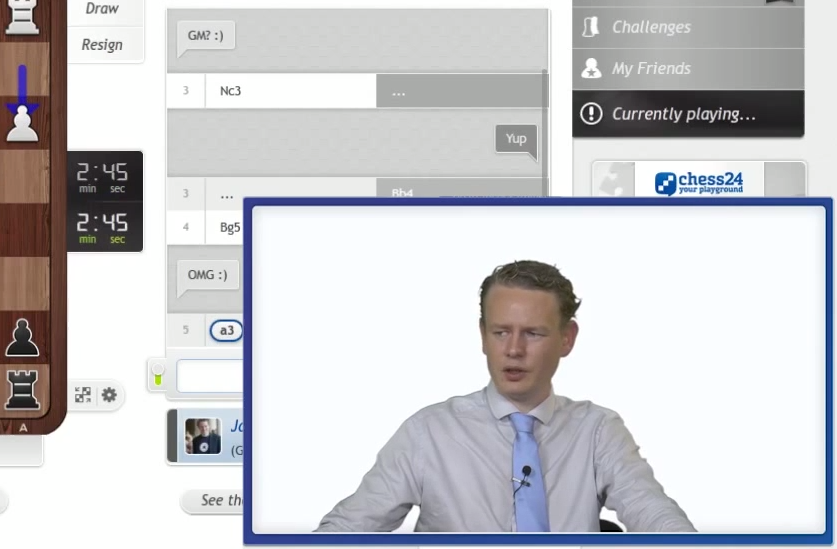 Jan finally found someone who was impressed by his Grandmaster title!

When Jan Gustafsson isn’t commentating on top chess tournaments he can often be found playing blitz in the chess24 Playzone. From time to time he switches on a camera – not just to record his games for posterity... but also to entertain and instruct as he reveals the thought processes of a grandmaster. In this case those included an unusual way of levelling the playing field: “To give myself additional handicaps I am wearing a tie and trying to talk as much as I can”.

There was something of a theme to this session, with Jan and his opponents trying various “Indian” defences – i.e. games that start 1.d4 Nf6. Black aims for counterplay against the white centre rather than playing the more solid symmetrical structures after 1…d5. But enough intro, let’s get to the games!

The Old Indian – Jan vs. ourchess

In this game chess24 user ourchess adopts an Old Indian-style setup (similar to the King’s Indian but with Be7 rather than Bg7) that Jan describes as “passive but reliable”. Although the grandmaster soon gets an edge it’s worth watching the later stages to see how close our hero comes to blundering his queen in one move

The King’s Indian – Jan vs. MrTactics

True to his name, MrTactics plays the sharper King’s Indian Defence, for which Jan comes well-prepared – although some might say “I’ve lost many games here” is a puzzling reason for his opening selection! In a moment of hesitation he later laments:

Would Jan chalk up another loss in his pet line?

The Nimzo-Indian with 4.Qc2 – Melandri vs. Jan

Sometimes it helps to know stuff! Jan recently published a 12-video series explaining how to play the 4.Qc2 variation against the Nimzo-Indian. Although the series is presented from a white perspective it’s of course just as interesting for those playing Black… in this case – Jan! He explained in the series why the ending after the “funny-looking” Qf5 is “basically fine for Black.” 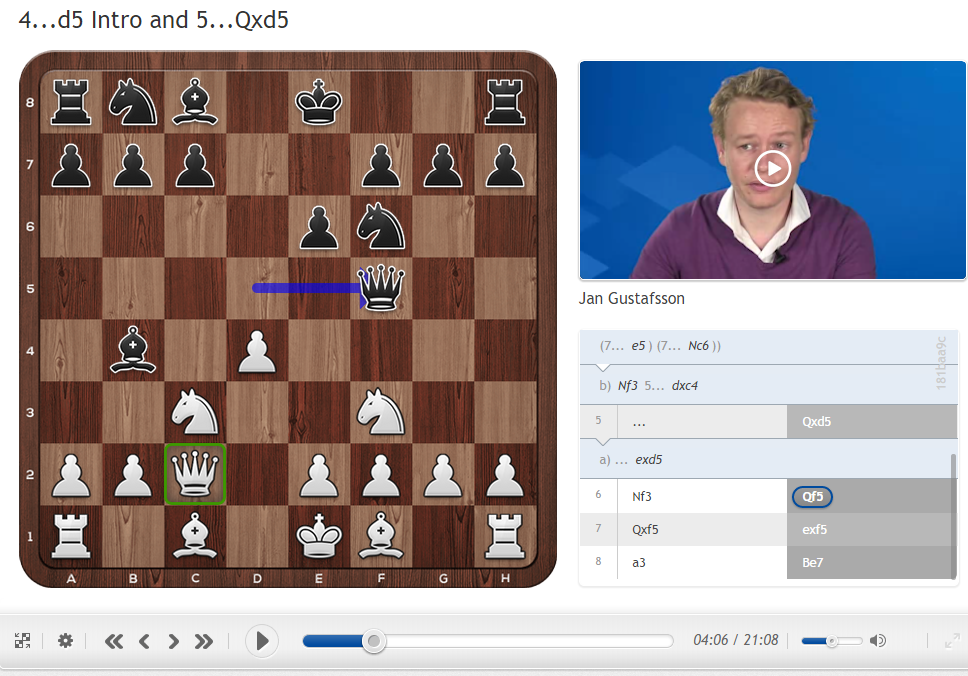 Without the pressure of playing blitz Jan has a bit more time for explanations in his video series!

In the blitz game he got a chance to show why Black is OK:

Another Nimzo-Indian – ASALA vs. Jan

The following game, meanwhile, had less theoretical relevance. 1782-rated ASALA used the chat function to confirm his opponent was a grandmaster and didn't hide his amazement. Jan, in typical grandmaster fashion, set out to exploit the edge it gave him!

I’m not sure this is theory, but he seems to be distracted by my GM title, which is good news for me.

The game that followed was a model example of how to play against the weak pawns that frequently occur in this variation.

Let’s end with an all-out attacking game, or at least as close as you can get to one in Jan’s games

He started off with extra motivation:

I will play him and crush him for not being a registered member.

Watch how Jan dealt with the angel and devil whispering in his ears:

That’s all for now, but strong grandmasters are often lurking in the chess24 Playzone. For instance, the rivalry between Spanish no. 1 Paco Vallejo and IM Lawrence Trent continued today:

Why not visit the Playzone lobby and either watch or get involved in the action!