Ding Liren is up to 3rd place in the Magnus Carlsen Invitational standings after a tense and well-played match came to an abrupt end in the sudden death game. “It’s farce, not Armageddon,” commented the watching Alexander Grischuk as Maxime Vachier-Lagrave blundered and lost in just 16 moves. Meanwhile Anish Giri’s quest to win a game in the event goes on as he missed a great chance before Ian Nepomniachtchi picked up the full 3 match points. 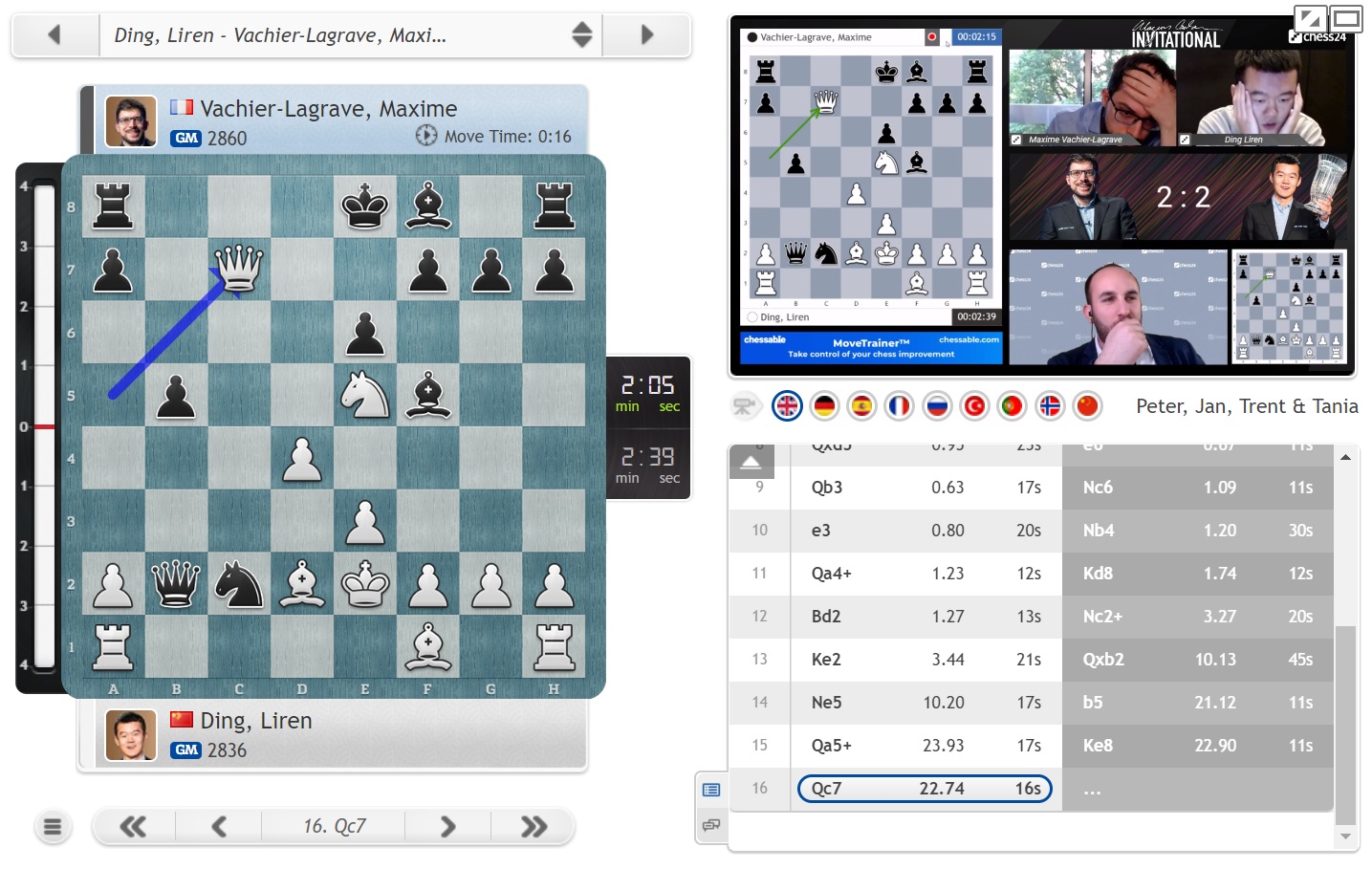 Maxime's Armageddon woes are going from bad to worse...

You can replay all the Magnus Carlsen Invitational games using the selector below (click on a game to open it with computer analysis):

That meant Ian Nepomniachtchi was the day’s highest scorer for winning without the need for Armageddon, while Ding Liren took two points and MVL one after the Armageddon game: 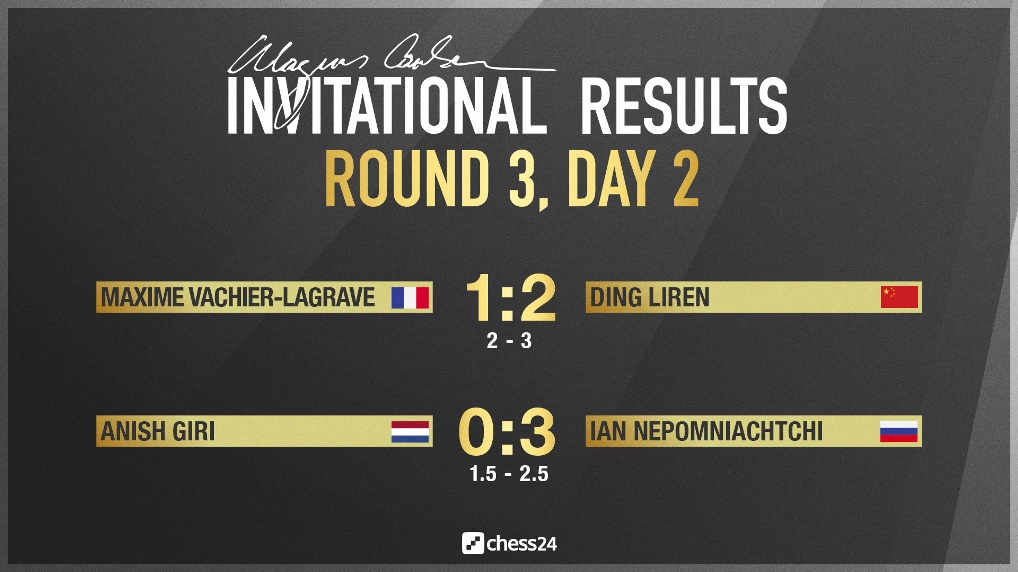 And here’s the aftershow with Pascal Charbonneau:

This was billed before it began as a heavyweight struggle, and it lived up to that reputation. The world numbers 3 and 5, or 3 and 2 if you took the rapid ratings, gave each other only glimmers of hope in the four rapid games. Ding Liren perhaps came closest to breaking through with the white pieces, but almost the greatest moment of peril in the first four games of the match was when Ding disconnected in one of the games. Fortunately this time the players resumed the game from the same position and times with a minimum of fuss.

That meant an Armageddon game between two players who had lost their previous Armageddons - Ding Liren to Caruana, and MVL to Nepomniachtchi. If one thing seemed certain, it was that Maxime couldn’t do worse than he’d done in that game, when he was lost in 17 moves and resigned on move 20. But it turned out that was nothing!

14.Ne5! is the only move that wins for White, but it’s absolutely crushing, threatening mate on d7, among other things. 14…b5 15.Qa5+ Ke8 16.Qc7 and Maxime threw in the towel rather than give any spite checks:

It was a strange end to the match, but at least the break before the Armageddon had given us time for an enjoyable intervention from the chess world’s most diplomatic player, Alexander Grischuk:

This match also got off to a quiet start, but in Game 2 Ian Nepomniachtchi showed that he meant business with 7.Qc2:

This quiet little move is not so innocent – e.g. 7…0-0? 8.Nxd5! Qxd5 9.Ng5! and Black could resign – but the most noteworthy point is that it seems to be a novelty. There was a time when no-one would "burn" a novelty in a rapid or blitz event, but this one is for serious stakes, and as Fabiano Caruana said in a previous interview:

This is the only tournament that I do have for a long time and it is also a tournament with many if not most of the best players in the world so I do take it seriously and I really would love to do very well.

He added during Day 6, “I don't know about other players, but I already showed all my Candidates ideas!” referring to the virus-interrupted tournament in Yekaterinburg that will determine Magnus Carlsen’s next World Championship challenger.

Anish wasn’t going to fall into any simple traps, but he was eventually undone by a bold exchange sacrifice from his opponent:

25.Qxc7!? Bxf1 26.Kxf1 f6 27.Qxa7 and Nepo’s passed a-pawn eventually decided the game in White’s favour, though Giri could have done more to stop it.

That meant Anish needed to win one of the next two games and, in defiance of his critics, it looked as though he might make it in Game 3. Critic-in-chief was that man Alexander Grischuk again, who didn’t believe in the Dutch no. 1’s instincts:

Of course for Anish it's very attractive to exchange queens and win a pawn - how can anything else be more attractive?

Giri, however, resisted the siren call of 27.Qxe4 Bxe4 28.Rxe6 and channelled his inner AlphaZero to go for 27.h6+! Kf7 28.Nf4! and only swapped off queens when it gave him a clearly winning position. It was all going right until 34…Rc4!, a fine double-purpose move:

In the final must-win game with the black pieces it was nominally Giri who was pressing for a win, but he never came close and remains on 0 match points, tied with Alireza Firouzja: 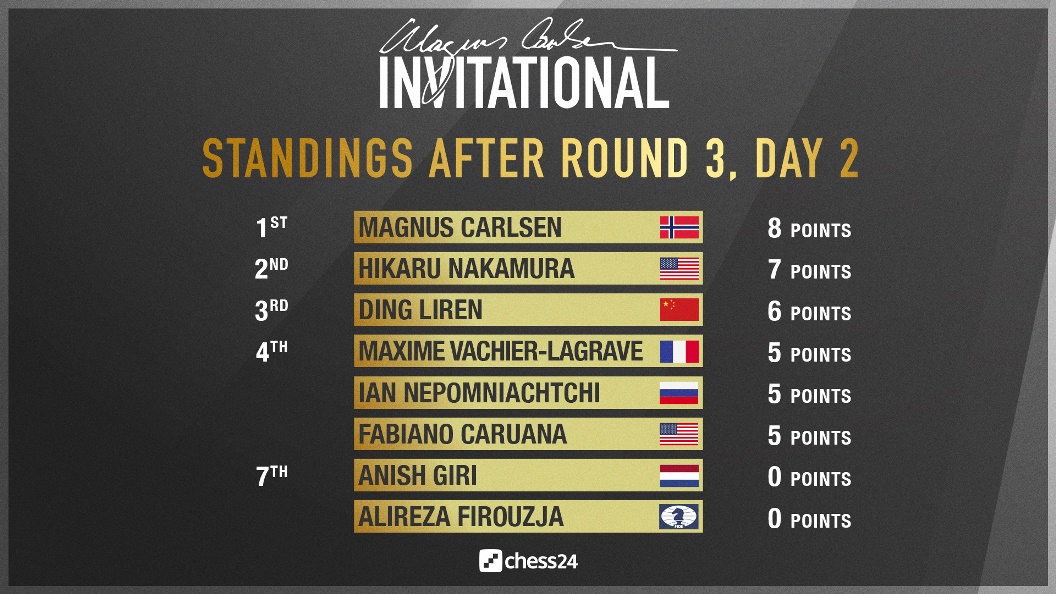 There are still four rounds to go, a potential 12 match points, for the players to improve their situation, but it’s approaching the must-win stage for Alireza as he takes on Fabiano Caruana tomorrow. Remember, the top four go forward to a knockout for the big prizes. The other match is another crowd-pleaser, as rapid world no. 1 Magnus Carlsen takes on rapid world no. 2 Maxime Vachier-Lagrave.

We hope you're enjoying the action...

...and if you think you can predict what will happen in Round 4 make sure to enter our Round 4 Fantasy Chess Contest.

Tune in again for all the Magnus Carlsen Invitational action from 15:30 CEST here on chess24.