Fabiano Caruana goes into Wednesday’s clash with Magnus Carlsen with the world numbers 1 and 2 tied for 1st place, though that had seemed unlikely as Fabi trailed by a point going into the final rapid game of the day. Ding Liren cracked, however, as did Maxime Vachier-Lagrave in the day’s other match, so that we were treated to two Armageddon games. Momentum mattered, as Caruana and Ian Nepomniachtchi both won with the black pieces. 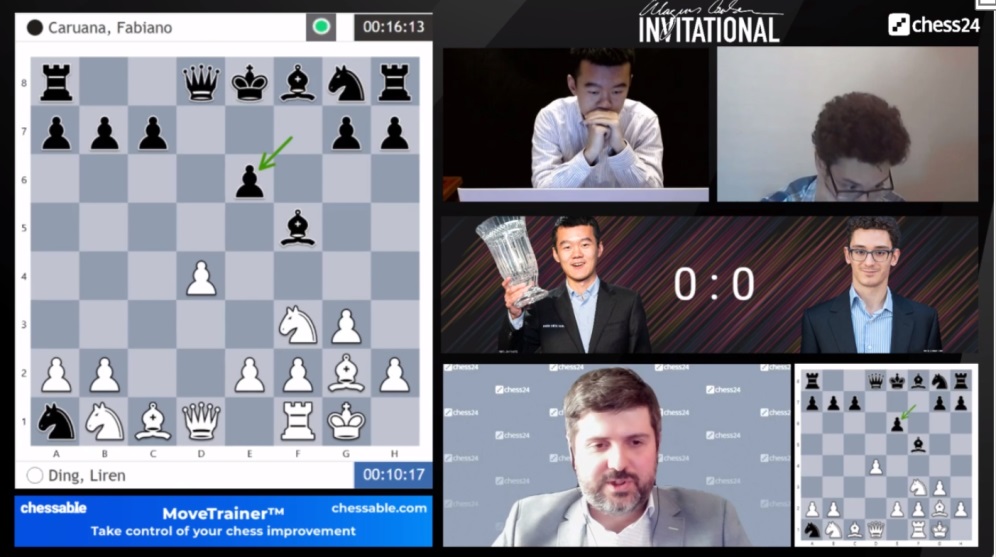 We got a wonderful start to the day, with both games featuring full piece sacs

You can replay all the games from the Magnus Carlsen Invitational using the selector below (click on a result to open the game with computer analysis):

That meant both Fabiano and Ian had picked up 2 points for winning in Armageddon, while the defeated players also got a consolation point for only losing in the sudden death game: 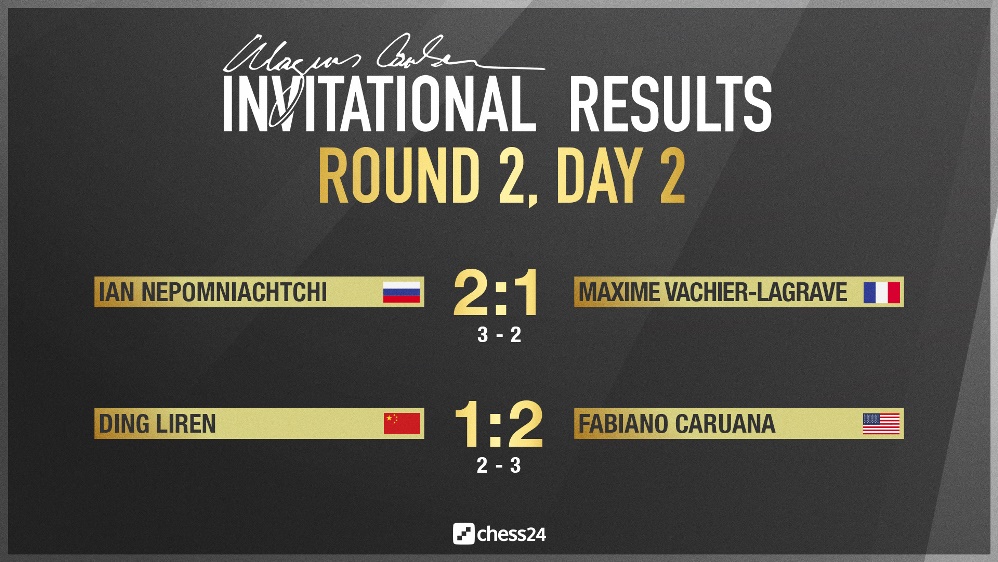 For a recap of the day’s action check out the Aftershow with GM Pascal Charbonneau and WGM Raluca Sgircea:

Both matches began as they ended – explosively:

Ding Liren had soon sacrificed a rook while Nepo was down a full piece after just 17 moves, but with a great position!

He pointed out afterwards that if he had played 20.Re6! here he could never be worse, but after 20.Rab1 he worsened his position with every move until it was just a question of when MVL would break through. The French no. 1 missed some chances…

…but he got there in the end.

When Ian was asked about the speed with which he was playing he commented, “the problem today I finally found out is that I’m playing 3+2!” The time control is of course 15+10, i.e. 15 minutes per move with a 10 second bonus after each move, and Nepo explained that by the time he slows down it’s usually too late to salvage anything if his position is bad. When Alexander Grischuk joined the live show he also noted the speed at which both players were taking decisions:

He felt trying to commentate was futile, comparing the chess to another sport!

Do they comment table tennis in real time or they just wait for the point to finish and then say a couple of words and prepare for the next point?

The match really does defy description, even now, since there were just too many twists in the next game, with MVL unlucky (or careless) not to have taken a 2:0 lead. That game was drawn, as was the third, where this time it was Nepo who missed a knockout punch: 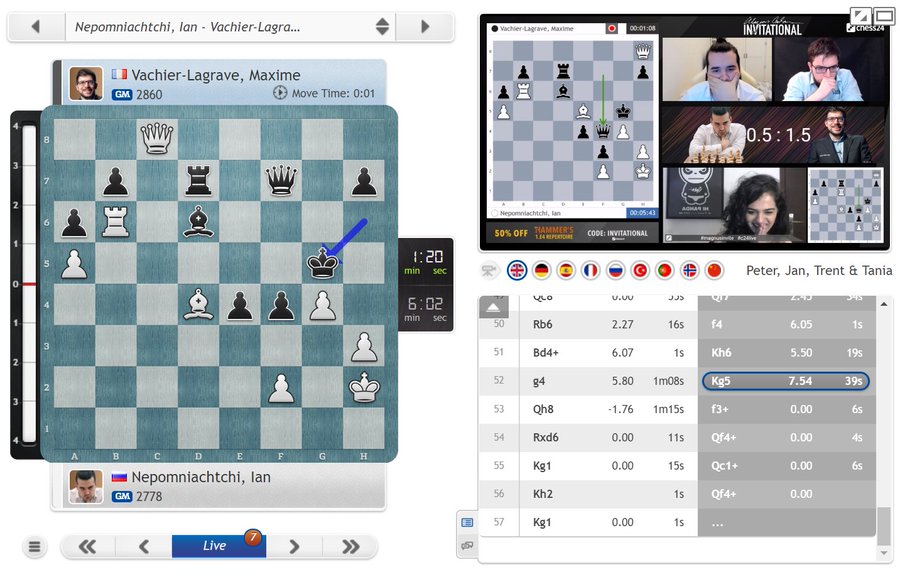 That mean Nepo had to win on demand with the black pieces, but for once still having 15 minutes after 30 moves came in very handy. He built up a winning position and then had all the time he needed to dodge the traps set by his opponent in a tricky endgame. That meant Armageddon, but barely had the game begun when the 15…e5! break in the Petroff clearly caught Maxime off-guard. Nepo was shocked:

I was surprised he didn’t know this idea, because it’s just very obvious... the key idea for the line otherwise White would be better for nothing.

As we saw already, the clash between the world nos. 2 and 3 got off to a spectacular start, but the players managed to extinguish the fires for a draw. The second game featured one missed chance in the middlegame…

…then one of those curious endings where one side is up a queen for a pawn but still unable to force a win:

Nigel Short is not alone in wanting to change the rules of chess so that White would win here!

Alexander Grischuk pointed out at this point that Ding and Caruana had each drawn five or their six games in the event up to this point, which seemed to inspire them to start spilling blood!


Ding’s 24.f5!? produced perhaps the most exciting position of the day:

24…gxf5? 25.Rf4 d4 was a brilliant but flawed idea. 26.Nb1! was just one of the moves that left Black’s queen looking somewhat foolish:

26…Rc2 27.Rxh4 Rxd2 28.Nxd2 would be winning for Black if he had a knight on f5 after playing 24…Nxf5! instead! As it was, Fabi had to scramble for compensation, with Grischuk summing up the position shortly after 26...Qxf4 with, “Basically everything is bad for White... except for having an extra queen!”

That queen proved enough and it meant Caruana had to win the fourth game to force Armageddon, which for most of the game looked unlikely. However, there was more venom in the white position than it appeared, and Ding’s last chance to win the game proved also to be the last chance to avoid defeat!

49…Rf6! secures f4 and poses White the problem of how to stop Bg5 and winning the rook on h4. The answer seems to be that you can’t, though White still has compensation after pushing the d-pawn. Instead after 49…Rc3+ 50.Ke4! the d-pawn went on to win the game.

Fabiano had Black in the Armageddon game and therefore 4 minutes to Ding’s 5, but only needed to make a draw. In the middle of the game that looked tough, as Ding was clearly better, but his edge had gone before he finally blundered with 36.Qb2?

After 36…Rxa2! Ding spent quite some time before resigning, but there was no longer any way to avoid losing a piece, with every single one of his pieces attacked and overloaded!

So the final outcome of that mayhem is that Fabiano Caruana has joined Magnus Carlsen in the lead, while MVL and Ding Liren have to settle for joint 3rd place with Hikaru Nakamura. 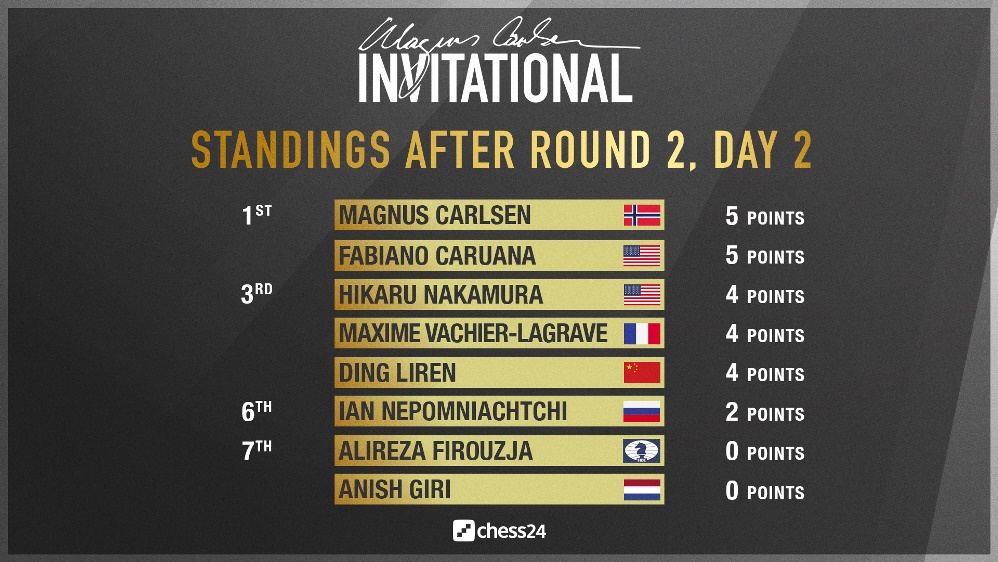 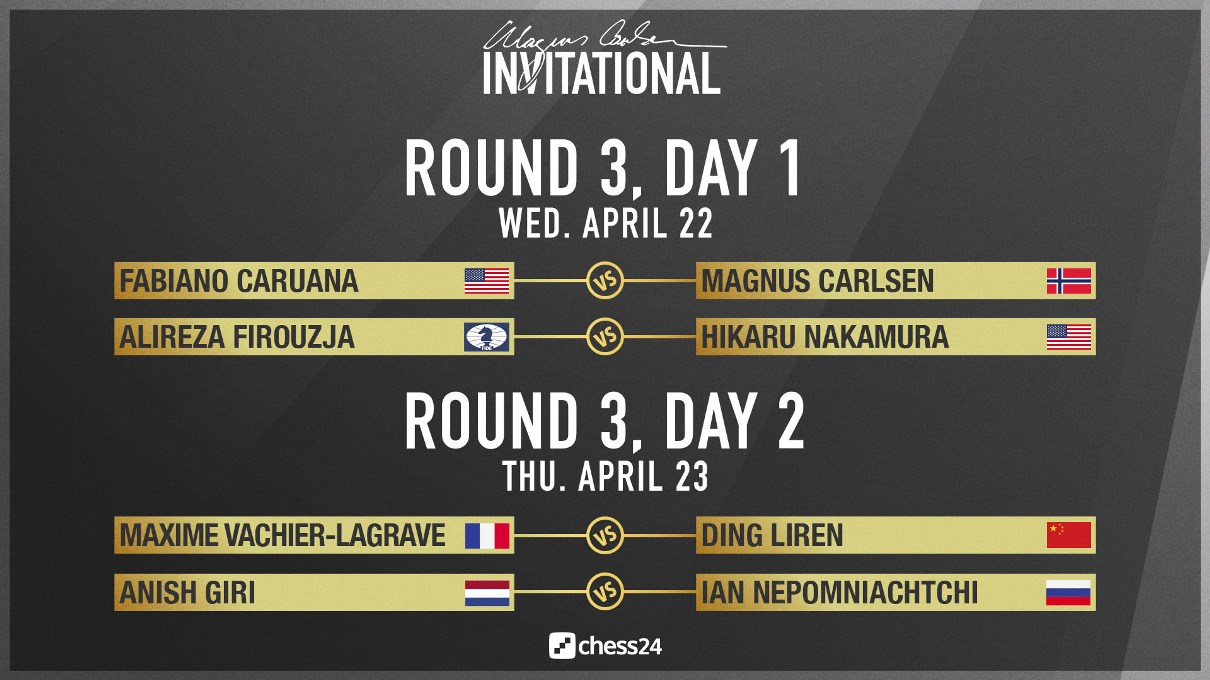 Before that, at 13:30 CEST, there's also a first ever Banter Blitz with Anish Giri. If you're a chess24 Premium member now's the chance to play the world no. 10!