World Champion Magnus Carlsen restored some kind of order to the chess universe with a 2.5:1.5 victory over 16-year-old rising star Alireza Firouzja, but despite two wins and a draw the game everyone will remember was Game 2. Alireza, wearing shorts, pulled off a “fantastic swindle” (Grischuk) to catch the champ in a mating net. In the other match Hikaru Nakamura beat Anish Giri after turning a dubious opening in the first game of the day into a smooth victory. 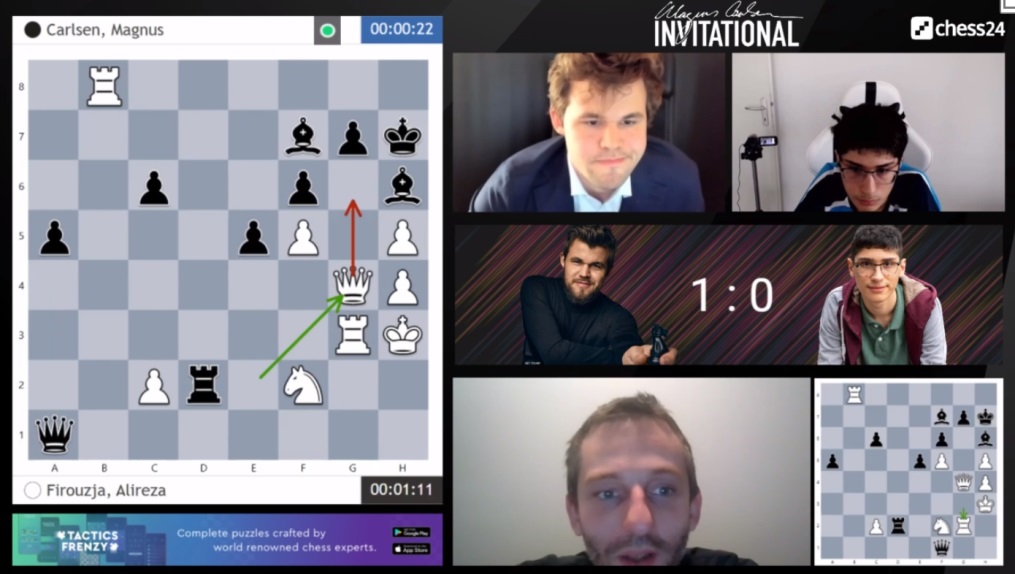 Alireza Firouzja does it again!

You can replay all the games from the Magnus Carlsen Invitational using the selector below:

Both matches had ended with the winners claiming the full 3 points for a match victory without the need for Armageddon: 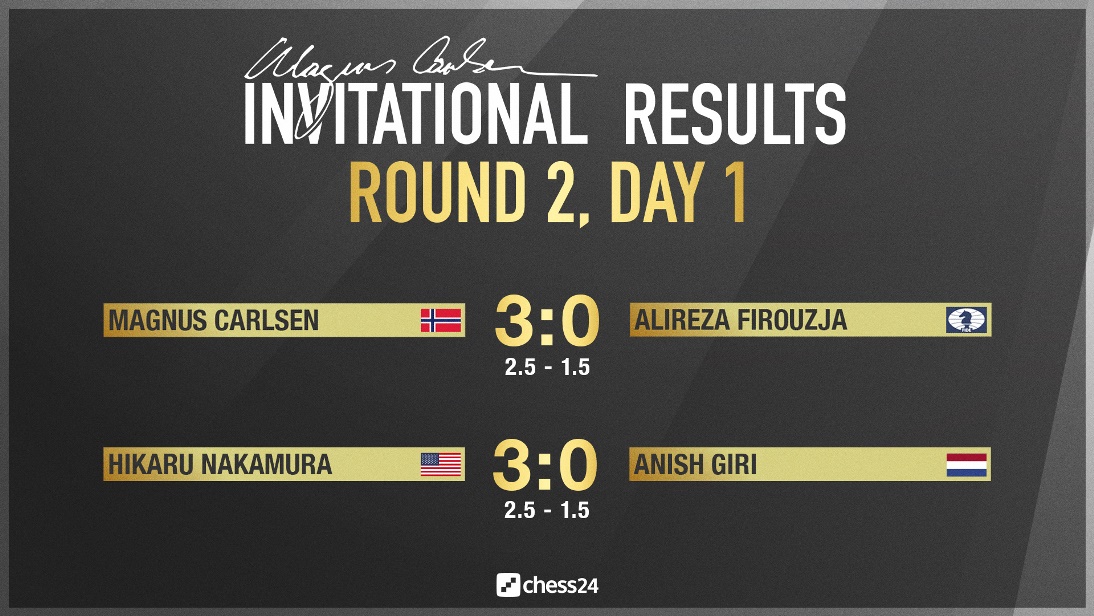 And here’s the day’s live commentary from Peter Svidler, Jan Gustafsson, Lawrence Trent and Alexander Grischuk, with interviews with Hikaru Nakamura and Magnus Carlsen at the end:

Check out the After Show with Pascal Charbonneau and Sam Shankland at 21:00 CEST:

Hikaru Nakamura’s 2.5:1.5 victory over Anish Giri looked very smooth, though Hikaru noted that before it became smooth he’d mixed things up in the opening of the first game:

The first game was pretty terrible for both of us... Anish let me off the hook and then I turned it into a smooth victory.

Anish at times pressed in the other games, but there was no moment at which he really seemed on the verge of breaking through. As Alexander Grischuk put it:

The way Anish plays it's a big question if he's going to win one game in this event - not one match, but one game!

The other match was the one everyone wanted to see and was orders of magnitude more fun to watch!

The first game of the match was a sign of things to come. Both players are hugely ambitious and combined to produce a Martian landscape on the chessboard:

Neither of them really knew what to make of it…

…but it was the kind of crazy position young Alireza thrives in. He soon went in for the tactical kill, but it became clear he’d overlooked something fundamental:

Jan Gustafsson noted that he was progressing at speed through the stages of grief until he reached acceptance and resigned.


Would it be an easy day at the office for the World Champion? At first it seemed it might be, as despite getting shocked in the middlegame he recovered and seemed to be closing in on a win with the black pieces in the 2nd game. It was at about this time that Alexander Grischuk first popped up on our screens to point out a tactical trap White could set, and although Alireza didn’t follow it precisely the fundamental idea was exactly the same. 39…Rd2?? was the path to doom:

40.Rb8+! Kh7 41.Qg4! suddenly left Black with no good way of stopping Qg6+ and mate! Alexander Grischuk called it a “fantastic swindle”, and when someone noted what a big blunder it had been by Magnus he paraphrased the famous saying often applied to himself that, “there are no heroes in time trouble”:

The game ended 41…Qf1+ 42.Rg2 (Svidler wondered if Magnus missed this) 42…Qxg2+ 43.Kxg2 and Black resigned. The theory that Alireza Firouzja really is the player who could claim Magnus’ crown had gained more weight, and Grischuk had a theory of his own:

It felt it made it even worse that Alireza Firouzja’s interpretation of the “business casual” mentioned in the regulations was a little loose!

A weaker man might buckle under that pressure, but as we saw in the Banter Blitz Cup final neither Magnus nor Alireza let defeats stop them from playing well in the subsequent games. He hit back with a very smooth positional win in the next game, meaning that all 7 of his rapid games in the event so far had ended in wins for White.

If we were going to get Armageddon that sequence would have to continue, but in fact in the fourth and final game it was Magnus who came closer to getting a win with the black pieces. The nearest he came to peril was when he managed to reveal his backdrop!

But the World Champion safely ended the game in a draw.

That means we got the curious situation that Magnus had taken revenge for the Banter Blitz Cup final defeat, but Alireza had still enhanced his reputation. On the Magnus Carlsen Invitational scoreboard, however, their positions couldn’t be more different. Magnus has won two matches to lead, while Alireza has lost both matches to remain on 0 match points – he’ll need to put his foot on the accelerator to ensure he qualifies for the Final Four knockout and a potential rematch with Magnus! 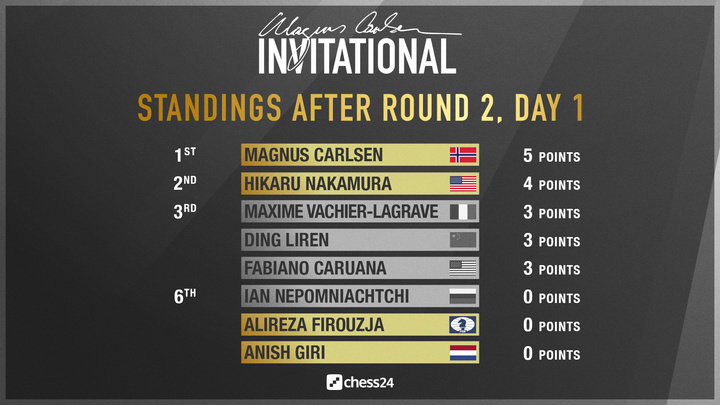 Four players are greyed out above since they haven’t played their Round 2 matches yet. Once again all four players featured in the Candidates Tournament, with Nepomniachtchi-MVL a clash of the leaders and Ding Liren-Caruana a clash of the pre-tournament favourites!

Don't miss all the action LIVE here on chess24 from 16:00 CEST, when we can expect some of today’s players to join the commentary as well.