Fabiano Caruana needed just three games to end the Final 4 qualification hopes of Maxime Vachier-Lagrave, meaning he joins Magnus Carlsen, Hikaru Nakamura and Ding Liren in the knockout battle for the $70,000 top prize. Nakamura beat Ding Liren in Armageddon in the other match to create a 3-way tie at the top, though in tomorrow’s final preliminary round the players are perhaps mainly fighting to see who can avoid Magnus in the semi-finals!

Pinning and winning in Armageddon!

You can replay all the games from the Magnus Carlsen Invitational using the selector below (click on a result to open the game with computer analysis):

That meant Fabiano Caruana picked up the full 3 match points while Hikaru Nakamura and Ding Liren shared the points 2:1 after Armageddon:

And here’s the day’s Aftershow with Pascal Charbonneau, Alex Lopez and Fiona Steil-Antoni:

Let’s start with the match with the most at stake:

French no. 1 Maxime Vachier-Lagrave has remained consistent in the Magnus Carlsen Invitational in avoiding the chess openings everyone expects of him. When facing 1.d4 he hasn’t gone for the Grünfeld Defence, of which he’s the world’s leading exponent, but the Slav Defence. The experience may serve him well in future, but for now it’s been a failure. In the first game against Fabiano Caruana he was under pressure almost from the start and couldn’t hold things together when his time got low. 44…Qf4? was the losing move:

Game 2 was a similar story, as Maxime, an almost exclusively 1.e4 player, played 1.d4 and soon found himself in dire trouble:

That meant it was all or nothing in the next game, since to have a chance of qualifying for the Final 4 Maxime didn’t need merely to win the match but to win it before Armageddon and get the full 3 points. He played the Leningrad Dutch, and got almost all you could dream of in such a situation. On move 28 there was a moment of truth:

After the various knight sacs Black can follow up with moves such as Rd3 or pushing the kingside pawns, and although nothing is clear it’s just the kind of messy position in which Maxime might fashion a win. Instead after 28…Ngf6?! it took only a few moves until he found himself a pawn down fighting only to draw.

…but eventually it ended badly for Maxime as Fabiano managed to bring home the win after 103 moves!

That meant the match was over and we knew the identity of the Final 4 players, but all four games have to be played since game points are the first tiebreaker in deciding the tournament’s final standings.

That didn’t mean the players couldn’t have some fun, of course. Maxime began 1.e3!? and both players blitzed out the first moves at a terrifying pace. It caused the watching Alexander Grischuk to recall an incident when, with nothing at stake, he and Baadur Jobava tried to spice things up by adding their own unofficial time control:

Fabi eventually had to stop blitzing when he found himself in trouble, but he was probably correct that “the worst was behind me” until how he reacted to 36.f4!

The computer recommends the cold-blooded 36…Qa7! and Black can meet 37.fxg5 with 37…Qa1+! and Ng4 to follow, but Caruana quickly played the losing 36…exf3?, fatally opening the b1-h7 diagonal. 37.Qf8+! Kg6 38.Bd3+! left Black unable to defend the king. The most amazing thing about the game? Maxime ended with over 16 minutes on his clock after starting with 15!

The Candidates Tournament leader is not so weak and slow after all!

This match began with four draws, but it was anything but dull. There were interesting, sharp strategic battles in almost all the games, as well as missed chances. The clearest in Game 1 came after Ding Liren’s 37…Bg4:

38.Qxe5 by Hikaru led to an interesting endgame, but there was a much better option – 38.Qh4!, and if the bishop moves then the e7 square has been freed to play 39.Ne7!, forking the two black rooks. It would be close to game over.

In the 2nd game it was the Chinese no. 1 who almost opened the scoring with the white pieces after Hikaru seemed to have created trouble for himself. Peter Svidler compared it to Soviet bureaucracy:

The 3rd game was razor sharp again before it fizzled out into a draw, while Game 4 was the quietest of the match, though not without some puzzling moments:

That meant the winner would be decided in Armageddon, and after winning the toss Nakamura chose the black pieces. He only needed a draw to win the match, but in the end he did better, spotting a fine tactic:

That left the standings as follows before Round 7: 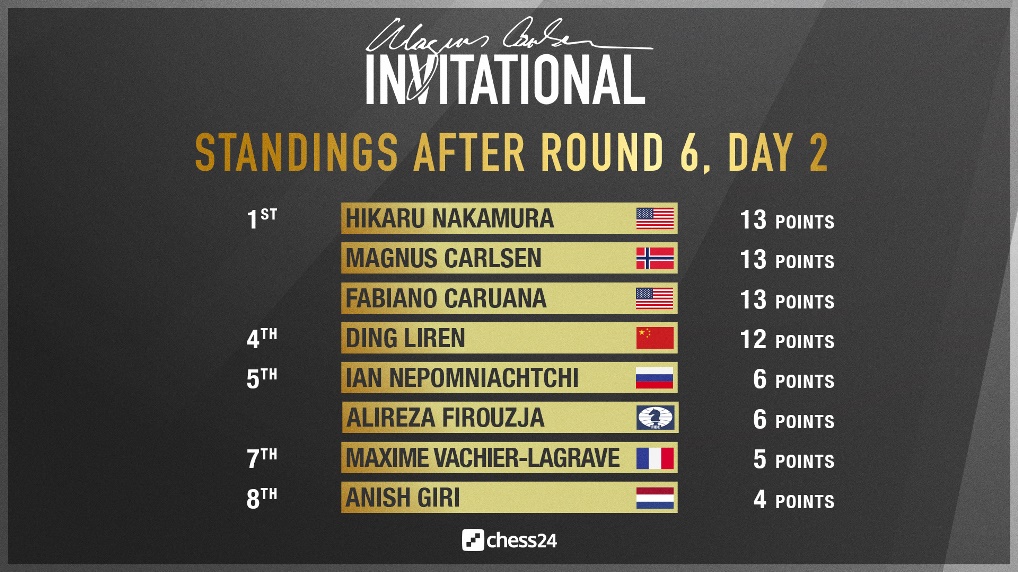 As you can see, Ding Liren is just 1 point behind the leading trio, but no-one else can catch them. The first semi-final will be on Friday, the second on Saturday and the final on Sunday, but before that all 8 players play at the same time in Thursday’s Round 7. There’s something to fight for even for the Top 4 since it’s no. 1 plays no. 4 and no. 2 plays no. 3 in the semis – and it’s likely players might want to avoid Magnus if they can! Here are the prizes:

As you can see, there’s also serious money at stake for finishing 5th rather than 8th, so that everyone has something to play for. Ding Liren-Carlsen and Nepomniachtchi-Firouzja are perhaps the most eagerly anticipated matches:

The tiebreaks are as follows – note it’s not total game points that matter first, but game points scored by the tied players against each other.

In case of ties in the sum of match points, the following tie-break criteria apply (rapid games only, Armageddon games do not count):

In the unlikely event that a tie for one of the top 4 places remains unresolved, it shall be resolved by a 4-game Blitz match between the tied players (time control 5’+3”, with an Armageddon game if required); if more than 2 players are involved, then a Blitz Round-Robin will be held.