Magnus Carlsen and Hikaru Nakamura traded blows for four games before their match on Day 1 of the Magnus Carlsen Invitational went to Armageddon. Hikaru had to win with the white pieces, but instead it was Magnus who won with Black in a game marred by a technical hitch and some controversy. Ding Liren is the early leader after beating 16-year-old star Alireza Firouzja 2.5:1.5, though Alireza gave glimpses of his talent with one miraculous save. 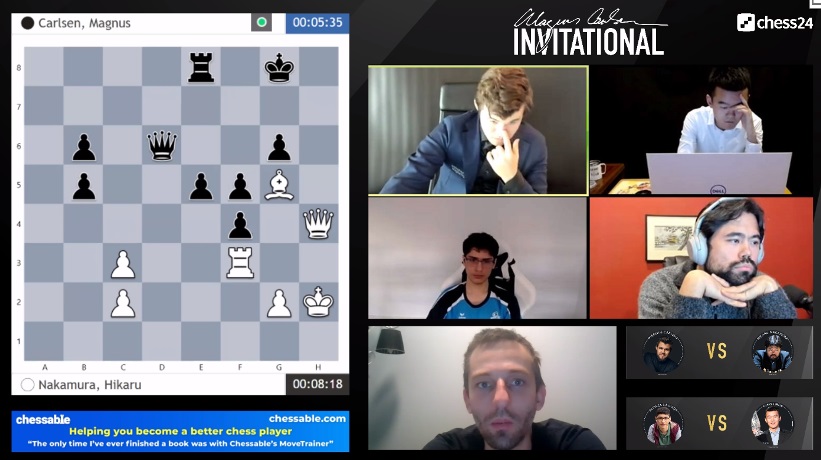 You can replay all the games from Day 1 of the Magnus Carlsen Invitation using the selector below (click a result to open the game with computer analysis):

The players earn 3 points for a win in the rapid games, while if a match goes to Armageddon the winner gets 2 points and the loser 1, makind the Day 1 scores: 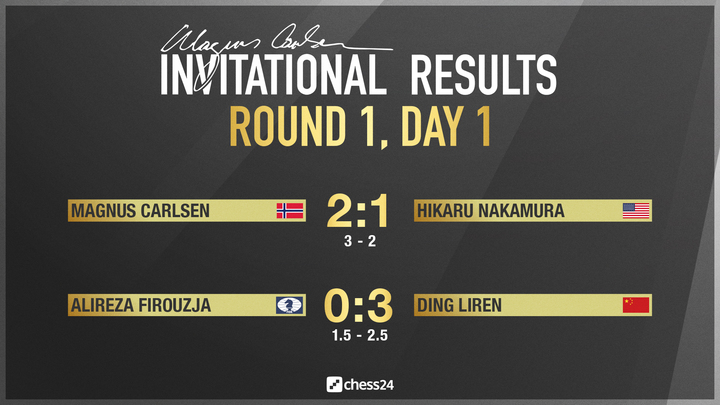 For a recap of all the day’s action check out the After Show with 2-time Canadian Champion Pascal Charbonneau and 2018 US Champion Sam Shankland:

Magnus Carlsen famously has a 14:1 score in classical wins against Hikaru Nakamura, and for the games where he had the white pieces it felt like many of those old encounters. The World Champion strategically outplayed his opponent, and at times it was tough to watch:

The a8-bishop did return to the action, but at the cost of the c-pawn and entering what became a hopeless bishop endgame. In Game 3 it was another familiar story from those one-sided classical games – Hikaru was fighting on equal terms until Magnus suddenly got a grip on what had appeared an equal position. 45…Kd8?! was the inaccuracy he needed:

46.Nc5! Nab8 47.b5! cxb5 48.Kb4! and suddenly the white king had found a way into the position. There may still have been a narrow path to a draw, but Magnus went on to win smoothly.

It was a very different story when the colours were reversed, however. In Game 2 Magnus continued to blitz out his moves, even when the position would have been terrifying for a mere mortal. Hikaru Nakamura has just played 23.f6!

30…fxg3 31.gxf7+ Kh8 and White promotes the f-pawn and emerges with an easy win. The game went on after 30...hxg6, but it soon went drastically downhill for Magnus, with Peter Svidler shocked at how Magnus had ended up totally lost when he still had so much time to spare:

Magnus is nothing if not a chess connoisseur, and he allowed Hikaru to give mate:

That gung-ho approach would be repeated in the fourth rapid game, when Magnus, needing only a draw to claim the full 3 match points, went for an old Sicilian line with a somewhat dubious reputation. Alexander Grischuk was scathing, and great fun!

“Tell us what you really think,” as Peter Svidler said. Things were actually soon going well for Black, but it felt as though Magnus had failed to get out of the 3+0 blitz mode from the Banter Blitz Cup final:

The threat of mate on f8 leaves Black with a choice of bad endgames, and it seems Magnus rushed that as well as after 20…Rxe8 21.Qxb6 axb6 he just found himself a pawn and an exchange down. That meant we were heading to Armageddon, and Magnus wasn’t a happy bunny!

Magnus got to choose and decided to have the black pieces, meaning he had 4 minutes to his opponent’s 5, but only needed to draw to win the match. Again he chose an extremely sharp Sicilian, but this time he didn’t go astray:

After 25.Kh1 Black is better and probably has various ways of forcing a draw, but the game goes on. After 25.Kf1? Nf5! the white king is doomed, and the game ended shortly after 26.Rxf5 Qxf5+, with a black rook soon entering to finish off the game.

Magnus had won, or had he? The explanation for the arbiter intervening was a strange bug that had been missed (unfortunately Giri’s “secret matches” never went to Armageddon!) in the code sending Playzone games to our broadcast server. The players saw everything correctly – White started with 5 minutes to Black’s 4 and the clocks functioned perfectly, but people watching the game saw the times reversed, so that Black had 5 minutes and White 4. Naturally it seemed the game had been set up wrongly and the only fair thing to do would be to restart, but in fact only interrupting the players was a mistake. It was a very unfortunate end to the match, but the good news is that the bug has already been fixed and shouldn’t be an issue for future games.

In recent weeks Alireza Firouzja has seemed absolutely unstoppable, but for once things didn’t come easily for the 16-year-old. He was knocked out of the World Cup by Ding last year, and after a tense draw in Game 1 it was Ding who opened the scoring in Game 2 with the kind of tactical alertness Alireza has become famous for. 33.Rhc1? was a bad move in a tricky position:

33…Bxa3! took advantage of the fact that 34.Rxa3 Rb8+ is crushing, and although after 34.R1c2 Ding’s 34…Be7 was far from the most incisive win it proved perfectly sufficient.

It looked like the Chinese no. 1 would wrap up the match with a game to spare when he trapped Firouzja’s queen:

A weaker man would have resigned, but Firouzja played on in the hope of using his central pawns to compensate for the missing material:

Alexander Grischuk here immediately predicted 35…f5!, noting he’d seen enough Firouzja bullet games to know what was coming. Ding was low on the clock and failed to find any of the tricky paths that still led to victory, and after 36.g6?! (36.exf5!) 36…fxe4 37.gxf7?! (37.Rh3! and it seems White can still stop the pawns) 37…exd3 38.Qg5+ the world no. 3 settled for forcing a draw by perpetual check.

Firouzja was still trailing in the match, and despite pressing in the final game he couldn’t break through. That means that Ding Liren ends Day 1 of the Magnus Carlsen Invitational in the clear lead: 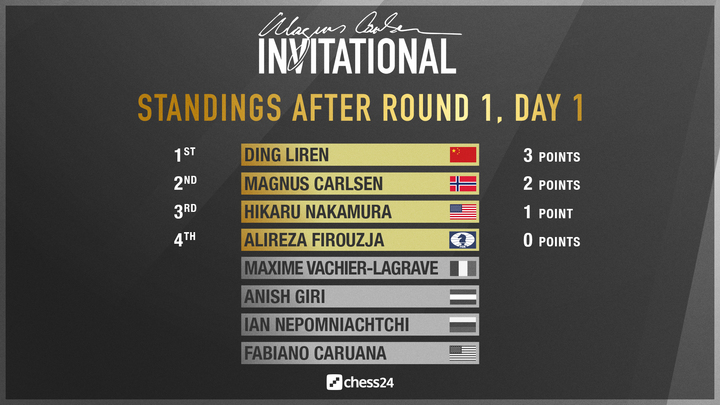 Of course the players in grey haven’t yet played a game, and on Day 2 we’ve got Fabiano Caruana vs. Ian Nepomniachtchi and Maxime Vachier-Lagrave vs. Anish Giri.

The pre-match banter has begun!

Check out all the action LIVE here on chess24 from 16:00 CEST, when we can expect some of today’s players to join the commentary as well.