World Champion Magnus Carlsen will be dreaming of setting new chess records when he starts the 11-round Sinquefield Cup against Anish Giri on Saturday. He goes into the event, featuring all of the world’s top 9 players, on a rating of 2882, matching the peak he set back in 2014. Can he improve on that, can he cross 2900, or can he “at least” beat his peak live rating of 2889.2? We’ll soon find out, though to beat any of those records he’s going to need to stop playing like his “evil twin brother” as he did in the St. Louis Rapid and Blitz! 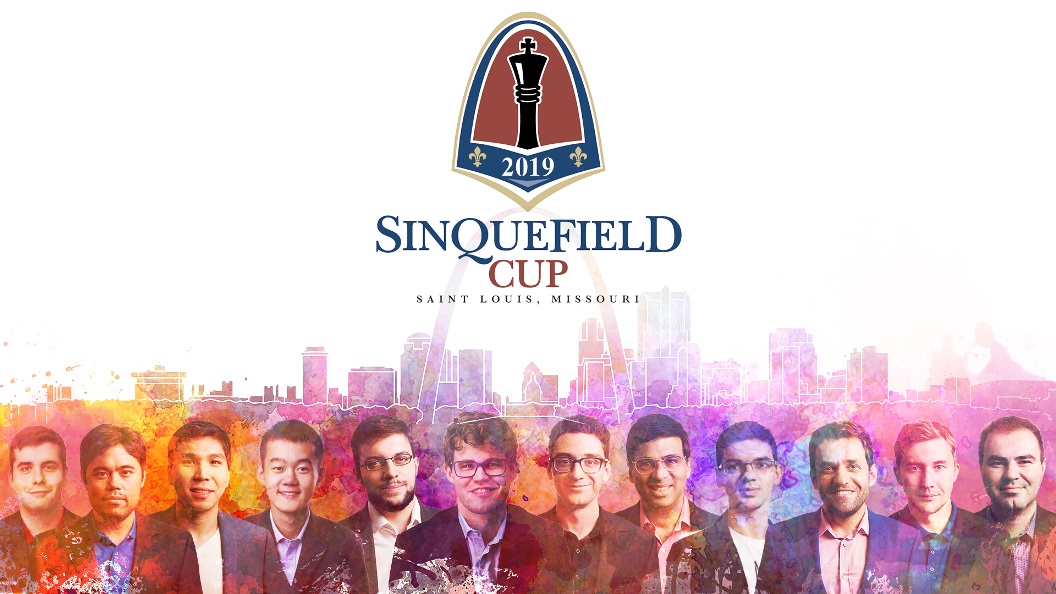 The pairings for the 2019 Sinquefield Cup have long been known, since they’re exactly the same as the Croatia Grand Chess Tour pairings, only with colours reversed. Once again it’s the full cast of Grand Chess Tour regulars with no wild cards, making it one of the strongest events ever held:

It comes in the immediate aftermath of the St. Louis Rapid & Blitz, so it was decided to combine the closing ceremony for that tournament with the opening ceremony of the Sinquefield Cup. That event took place on Thursday evening in the St. Louis World Chess Hall of Fame, and you can watch it below:

Levon Aronian of course triumphed in the rapid and blitz, though in a short but very entertaining speech he admitted it hadn’t been entirely smooth!

I can say at some point it felt like this running where you have to put on a dinosaur suit, so everybody was falling. It was a lot of excitement, and I can say I was lucky in a way to win the tournament, because there was such a chase, but as my father loves to put it, whenever I was little they would say, “oh, your son just got lucky!” My father would say, “of course he’s lucky, he’s smarter than your children!” Not meaning to disrespect anybody… but I want to say it’s a good warm-up for the main event and I’m very excited once again to try and compete against the best in the world.

Maurice Ashley asked the Sinquefield Cup players who hadn’t been involved in that tournament (Giri, Nakamura, So, Nepomniachtchi and Anand) how they felt about it, eliciting some amusing responses:

I’ve seen the games of the event, and looking at how poor everybody played I think I would have played even poorer, so I think for me it’s good I skipped that one, for sure.

In Abidjan I played against Wesley and I blundered mate-in-1 at some point and he didn’t see it, and probably now I know that I’m not the only person who blunders mate-in-1, even among the best. Really that’s a relief for me - I’m not ashamed anymore!

I was kind of glad not playing the St. Louis Rapid and Blitz because Magnus was there, but then now I don’t know. I feel somebody took Magnus’s identity – his twin brother played for him! 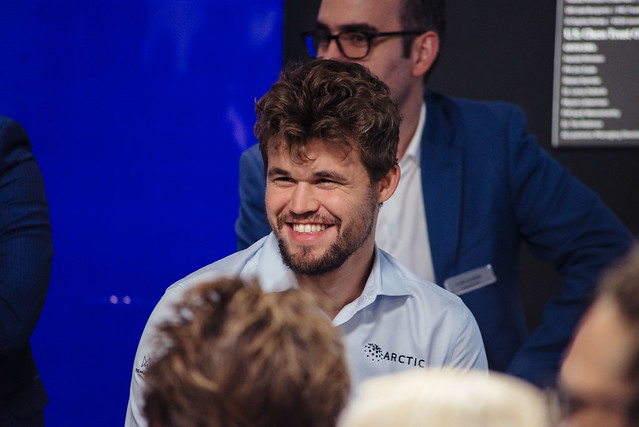 Let’s switch straight to the response from the World Champion Magnus Carlsen:

Apparently I didn’t play the rapid and blitz, but if I were to speak for my evil twin brother, and he were to play the Sinquefield Cup, he would probably not be so pleased with his results, but he would look forward to the future, and he’s been pretty good in the past at leaving the past behind and focusing on the future, so I think he would do the same this time.

The other players who had suffered during the Rapid and Blitz had fun explaining how things had gone. For instance, Fabiano Caruana:

What can I say about my play? I actually think it was summarised best by a grandmaster many years ago, I think it was after the game against Hikaru actually, which he seriously misplayed, and he said, “if I don’t kill myself tonight I’ll live a thousand years!” I’m still here, so I’m actually looking forward to the next one with confidence.

We can’t resist including the best and perhaps quickest chess post-game interview ever!

Ok, I lost every day minimum 6-7 games, maybe it’s not good, but also it’s something new for me! I got first time last place, but it’s very good, I’m very happy to play. I hope I will come back and maybe next time I will not lose 5-6 games but maybe 3. 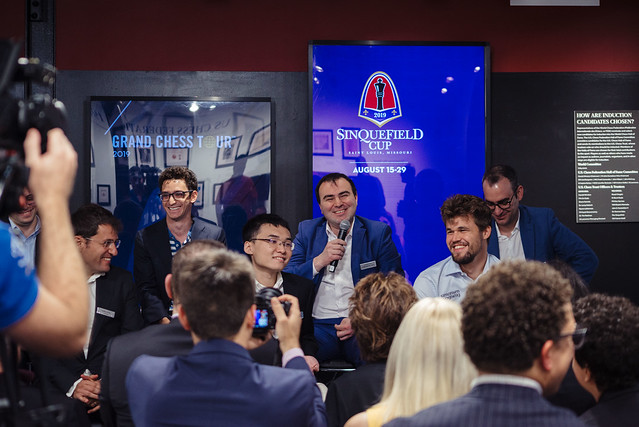 I was actually very happy to win the St. Louis blitz tournament for the 2nd time, but unfortunately the tournament doesn’t exist, because it’s rapid and blitz!

None of those answers could quite match Ding Liren, who brought a new existential depth to the topic of the packed chess calendar this year:

Chesswise I was very pleased with my performance, but since we have been abroad for so long and will stay here for another two weeks I’ve started to worry about the rice I brought here. I’m worried about is it enough?

Metaphorically speaking, all the players will be wondering whether their supplies of rice will last the gruelling 11 rounds of the Sinquefield Cup, but even when it ends that won’t be the end of chess action in St. Louis. Once again none other than chess legend Garry Kasparov has been lured to the chessboard by the prospect of playing Fischer Random Chess in the 2019 Champions Showdown: Chess960. This year, rather than facing fellow veteran Veselin Topalov, as he did in 2018, he’s going to be playing 20 rapid and blitz games against world no. 2 Fabiano Caruana! 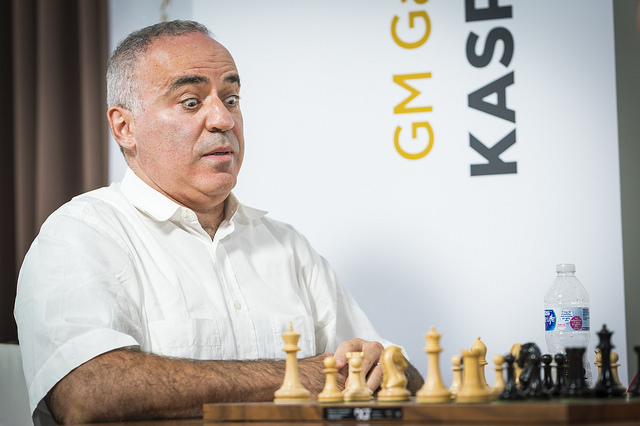 There are also matches for three more US stars:

Each match has the same format of six rapid games with 30 minutes for all moves and a 10-second delay, followed by fourteen 5+5 blitz games. The rapid games are worth double.

That's a 4-day event from 2-5 September, but first up is the Sinquefield Cup that will be live here on chess24 at the usual time of 13:00 in St. Louis or 20:00 CEST on Saturday 17 August, with the same commentary teams that brought you the Rapid & Blitz. Don’t miss it!