“I don’t feel bad about beating him at all!” said Magnus Carlsen after defeating Salem Saleh 7:0 in the Last 16 of the MrDodgy Invitational, revealing he’d recently lost some online games to the UAE grandmaster. There were also wins for Daniil Dubov and Rauf Mamedov as the knockout stage began. 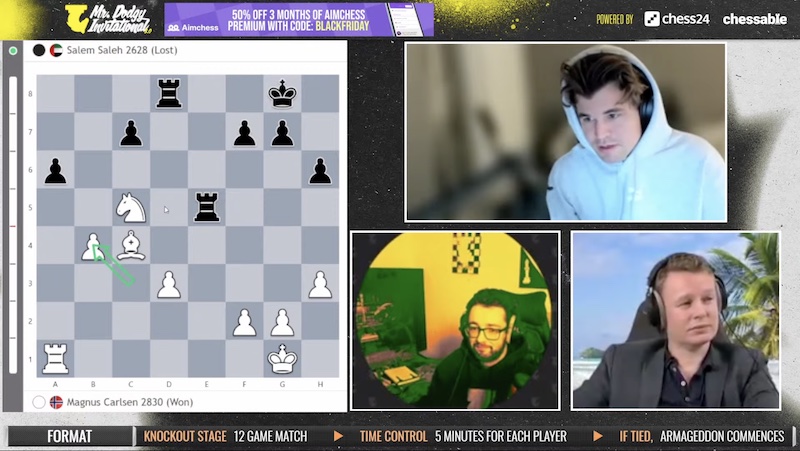 Magnus Carlsen stumbled into the prestigious MrDodgy Invitational, revealing in an interview with Jan Gustafsson and MrDodgy at the end of the day’s play that it was very last minute that he played, and won, the qualifier, when David Howell dropped out:

David, who is on vacation, contacted me a couple of hours before, he said that his internet is shitty, so he couldn’t play, and then I was thinking, yeah, I don’t have any plans, so I was convinced after all, and then I said I wouldn’t play the knockout, or I’m not sure about that, but then I didn’t have any plans today either, so there you go!

As the winner of Pool A, Magnus was paired against the 8th player in Pool B, Salem Saleh, and in the end the greatest difficulty he had in the match was starting it! He appeared around 15 minutes late, commenting:

I have to apologise for being late today. I actually managed to oversleep! …I actually had my first decent sleep since I’ve been back from the United States. I’ve been like a zombie, just horribly jetlagged, so I think that’s also why I feel like after the first couple of games I was a bit slow and they reeked of somebody who hadn’t quite woken up, then after that I was actually feeling pretty ok and a lot fresher than I have in a week.

Up to a point the first game actually looked very smooth, though Magnus gave Salem some chances near the end before picking up a win.

The 2nd game looked crushing, and after that there was no stopping Magnus.

Anish had tuned in, but was still not daring to interact with MrDodgy after snubbing the 3rd MrDodgy Invitational despite winning the first two editions of the battle to win a photo of a man on a horse.

Everything kept going Magnus’ way, and he noted that Game 5 was nice, as he managed to quickly and correctly calculate the transition to a queen endgame where he would have some practical chances. He won it at the end, after Salem blundered.

In the final game Magnus only needed a draw to clinch the match, while briefly there was a chance for Salem to take over.

That was missed, however, and Magnus went out to close out a perfect 7:0 victory. Did he feel bad about that scoreline?

I was playing Salem the other day on a different account and then he was actually beating me, so I don’t feel bad about beating him at all!

How much does knowing you’re facing the World Champion change things?

Magnus explained why he went for serious openings:

Salem is extremely strong, so I was kind of worried about this match-up and I thought I should try and play fairly seriously. To be fair, a lot of the games were very close, so it wasn’t a foregone conclusion . Normally it would have been a lot closer, at the very least.

Of course this is an event Magnus has never won. He added:

This is a prestigious tournament so even though I didn’t really want to play as long as I’m here I’m taking it fairly seriously.

There were two more matches on Sunday, with both also relatively comfortable wins for the favourites.

Pavel Eljanov actually had far better positions than the scoreline suggested, but the pattern for the day was set by 35…Kg8? in Game 1, allowing Daniil Dubov to take the lead with a simple fork.

Perhaps the turning point of the match was another hard-to-take moment, in Game 3, when Pavel was completely winning with Black but went for 50…Ra3?, walking into 51.Rf7+!

After 51…Ke4 52.Rxf2 the pawn can’t capture the rook, as it’s pinned, so Daniil was a rook up and went on to win comfortably.

It was clear he was taking the event seriously, and why not? He revealed afterwards that the Monster Mystery Bash had meant more to him than winning his first ever Russian Championship title.

The day’s other winner was Rauf Mamedov, who powered to victory over Maxime Lagarde after a slow start.

His first win got a smile from his opponent, who spotted too late the idea of Kd2 and Kc3 to pick up the rook on b2.

Mamedov will play Dubov in what should be a very hard-fought quarterfinal, while Magnus will take on the winner of Kirill Shevchenko vs. Luis Supi. That’s taking place at 17:00 CET on Monday, as is Sam Sevian vs. Vincent Keymer.

At 19:00 CET there’s 3-time World Blitz Champion Alexander Grischuk vs. speed demon Andrew Tang, as well as Alan Pichot vs. Mahammad Muradli. Then there’s a bonus at 21:30 CET, as Jorden van Foreest takes on Jorge Cori in a match that had to be postponed a day.