Magnus Carlsen has won the 3rd edition of the MrDodgy Invitational after cruising to a 6.5:1.5 victory in the final against Daniil Dubov. The games were closer than the scoreline suggests, but Daniil explained that when playing Magnus it’s a case of “you can choose the way you lose”. He chose to try and match the World Champion on the board, but not on the clock. 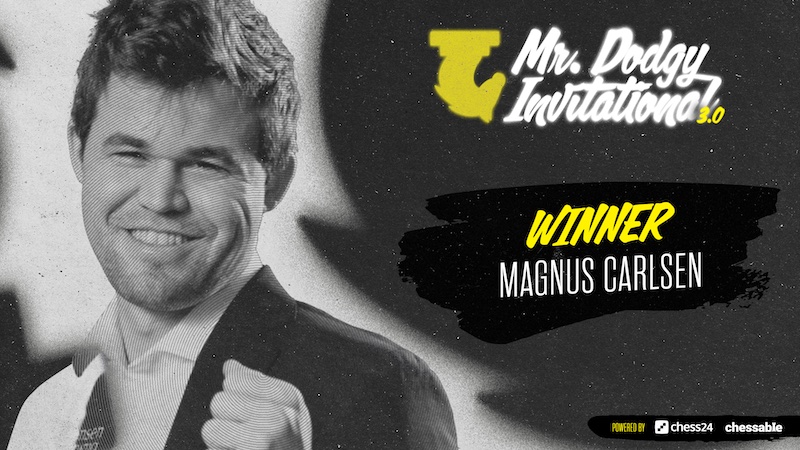 David Howell’s last-minute replacement dominated this year’s MrDodgy Invitational. First he finished clear first in the toughest of the two qualifiers — a half point ahead of fellow finalist Daniil Dubov — then he got even better in the knockout matches, beating Salem Saleh (7:0), Kirill Shevchenko (7:4) and Sam Sevian (7:1). 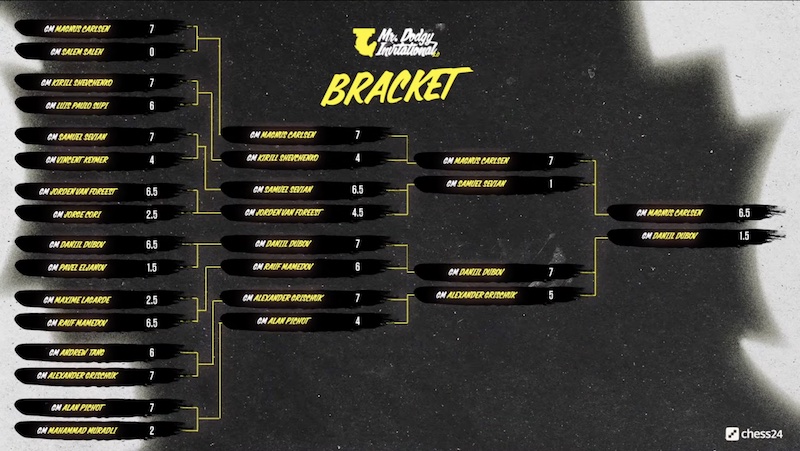 In total he won 24 games, drew 7, and lost just three, all in what now looks like an even more impressive run by Kirill Shevchenko. The final was over in just one less than the minimum possible number of games.

Magnus won the first game of each of his four matches, and against Dubov it was a perfect example of Attacking without Sacrificing, as he built up a huge advantage before finishing things off with a checkmating attack.

I think, first of all, Game 2, clearly I was winning in one move, and I saw the idea, and I even saw it in the game, but for some reason I just lost concentration for a second…

This was where things got out of hand.

The reason 29…Qxb2 isn’t just winning for Magnus here is 30.Nxd5!, which is why Magnus chose to move the d5-knight. He chose badly, however. 29…Nxc3 is slightly worse, 29…Ne3+ is equal, and 29…Nf4+! is close to winning, though in blitz it’s hard to spot how important the closing of the f-file after 30.gxf4 is for Black.

Instead Magnus went for 29…Nxb4?, when 30.Nd5!, leaving all four black pieces hanging, was winning. Instead Dubov played 30.axb4? Qxb2 and only then 31.Nd5, when 31…Qxc1! left Magnus with a superior queen endgame that he went on to win.

At that point I’d completely lost the thread, so yeah, Nxb4, I noticed after the move that Nd5 was possible, but what can I say, it was not impressive, that particular sequence. I was probably comfortably better, and then just to lose it in five moves would not have been great… After I won that game I think it was a very different story, for sure.

It could have gotten worse faster for Daniil, since Magnus looked sure to win the next game on time before stumbling into a draw by repetition, and then missed a win on the board in Game 4.

The score was 3:1 to Magnus, and Daniil felt he was “borderline winning” in Game 5, before he lost on the clock and the position.

He explained, referring to the clock situation and the lack of an increment:

Sometimes it’s somewhat counterintuitive that you are borderline winning, when you can basically resign.

The next game was the main one the players discussed in terms of time management and how it altered the strategy. Magnus went for the dramatic 18…Bxa2!?

The move opens up a double attack on the e4-bishop, but it might seem Magnus had blundered 19.h3! Qe6 20.Bh7+!, winning the black queen.

In fact it was part of the plan, as he explained when asked about flagging your opponent:

I think it depends on the situation, but this is a prestigious and serious tournament, so I think in general anything goes! I think it’s very clear that the strategy is also different if you play without increments. For instance, in the game where I sac’ed the queen I was pretty happy to sac the queen, because after that it’s an easier position to play, and I know if I don’t blunder something terribly then I will just win on time.

You clearly don’t play this in 3+2, or at least you think, but in this game it’s basically dead.

At this point my moves are so easy to play. To win this in 45-50 seconds, ok, you probably have to be like Alireza or… I think only Alireza, actually!

Daniil made no progress before he lost on time.

The penultimate game saw more of the same — an intense, closely balanced struggle that swung Magnus’ way on the board only at the last moment, when he was in any case about to win on time.

That left Daniil needing to win on demand, but in the end he only had one more reason to regret as he didn’t have time to convert what should have been a winning position. He summed up the match:

The draw meant Magnus had picked up one of the few titles that had previously eluded him, following in footsteps of Anish Giri, who had won the first two editions before shocking the chess world by choosing not to defend his title.

Magnus will next be in action on Tuesday, December 6th when he plays a Chess.com Speed Chess Last 16 match against 16-year-old Indian prodigy Gukesh, with Giri taking on Nihal Sarin a day later. We’ll be covering it all right here on chess24.