Magnus Carlsen sealed the overall Meltwater Champions Chess Tour title for the second year running - this time with an event to spare - after storming into the semi-finals of the Aimchess Rapid. The World Champion faces Jan-Krzysztof Duda in the semis, while either Shakhriyar Mamedyarov or Richard Rapport will be their opponent in the final. 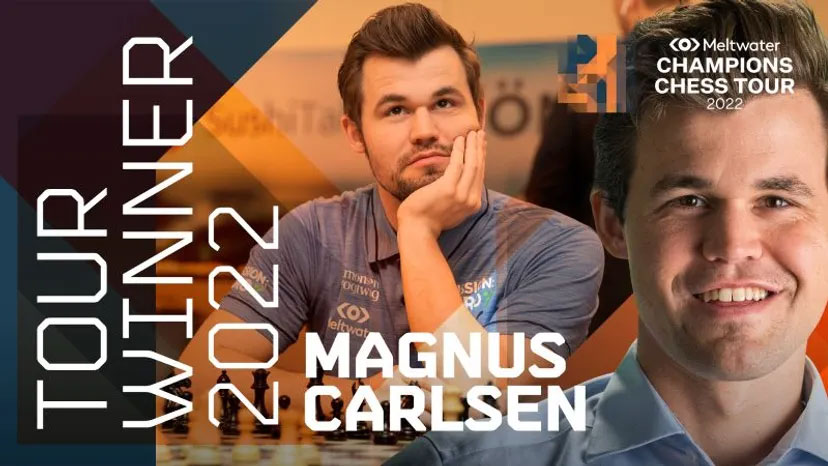 Norway's world number 1, going for a hat-trick of tournament wins in the Tour's penultimate event, scooped a $50,000 prize on top of his overall winnings so far of $192,500, along with the title of 2022 Tour Champion. With the last $210,000 event to go, Carlsen's total earnings will undoubtedly rise.

You can replay all games here:

Going into today's quarter-finals, Polish ace Jan-Krzysztof Duda was the only player who could catch Magnus, but he needed Indian teen Arjun Erigaisi to knock Carlsen out and then to win the Aimchess Rapid and November's final Major of the season.

You can watch the action from the quarter-final here:

The 31-year-old had to work in the opening game of his quarter-final match as Erigaisi played some of his best chess against the champ to go 3 pawns up and set up a seemingly easy win.

Carlsen, however, never gives up and opened his full box of endgame tricks to claw his way back into the game. Erigaisi wilted under the pressure and after 136 moves Carlsen escaped with a draw.

Carlsen, as he so often does, then took advantage of the Indian teen's ebbing confidence to follow-up with crushing wins.

After a quick exchange of queens in game 2, Carlsen seized the initiative with a temporary pawn sacrifice which gave him the bishop pair and eventually a strong passed pawn.

In Game 3, Erigaisi never recovered from what looks like a harmless move.

“I thought I was fine, and then at some point I realized I wasn't,” Carlsen said about the first game. “Obviously he should have won that game, converted the advantage, and when he didn't, the match turned out very differently,” Carlsen said from his cabin in Northern Sweden.

Having finished on a rather mediocre 5th place in the prelims, he needed to make some changes. He changed from his hoodie to wearing a blazer. “I just felt it couldn't continue, so I needed to change something at least.”

chess24 host Kaja Snare pointed out that Carlsen seems to be particularly good at recovering when struggling. Asked what strategy he follows, he said:

“It depends, I don't know. I just kind of always believe that things will turn around. But as you say, sometimes doing some things a little bit differently, just changing a bit of routine, can be helpful. For the World Blitz Championship in 2017, I was doing poorly. Then I shaved my beard, and I started winning!”

It ensured Carlsen's relatively smooth passage into the Aimchess semi-final - where the Tour Champ and Duda will meet - and decided the 2022 Tour Champion.

Duda, playing from Krakow, dominated the prelim stage and carried his form into the knockout as he also beat his Indian opponent, Vidit Gujrathi, 2.5-0.5 with a game to spare.


The third game went particularly smoothly for the Polish #1, who won in only 27 moves with Black.

Duda said, "I wouldn't call it easy, I think it was unexpected that I won the match in three games."

With Duda and Carlsen facing off in one semi, the other will be fought by Azerbaijan ace Shakhriyar Mamedyarov and Romania's number 1 Richard Rapport, who overcame teenage prodigies Nodirbek Abdusattorov and D. Gukesh respectively.

Rapport beat Gukesh who, like Erigaisi, scored a win against Carlsen in the prelim stage. It took Rapport 167 moves to triumph in an epic final game to deny his teenage opponent tiebreaks.

In the interview with chess24, it was a typically self-critical Rapport who spoke to Kaja Snare.

It meant all the teenagers were knocked out of the Aimchess Rapid.

Meanwhile, the experienced Mamedyarov knocked out the World Rapid Champion Nordibek Abdusattorov 2.5-0.5. For Gukesh and Abdusattorov, their runs to the last eight were hugely-impressive.

The semi-finals start today at 18.00 CEST. Don't miss the fun with every move covered on chess24.com/tour and on chess24's Twitch and Youtube Channels.