World Chess Champion Magnus Carlsen will no longer defend his crown, but normal service was resumed in Zagreb as he won the SuperUnited Rapid & Blitz Croatia with a round to spare. Amazing last days saw Alireza Firouzja and MVL finish just half a point behind, though only after Magnus lost his last two games. 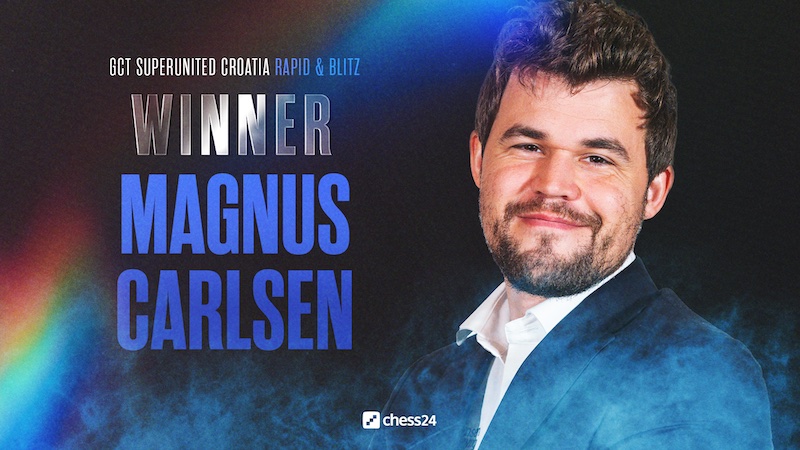 Magnus Carlsen picked up $40,000 for winning the SuperUnited Rapid & Blitz Croatia after finishing on 22.5 points out of a possible 36. 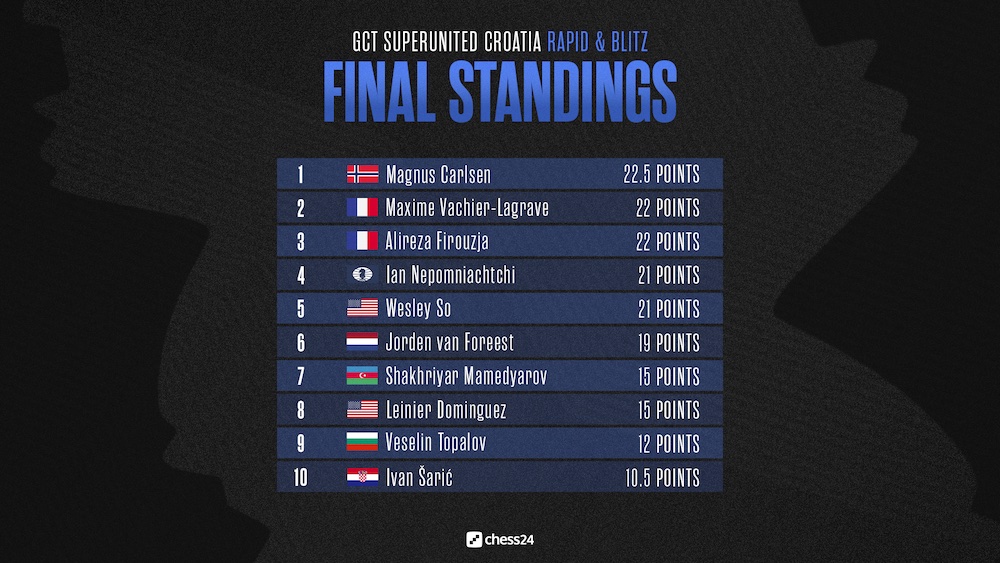 Magnus keeps everything under control

Magnus summed up how the final day had gone.

The 2nd day was a bit tough for me, and the rapid in general was not so good, but I think I was lucky that nobody really had a superb performance. For instance, Maxime and Alireza had great performances today, but they didn’t do so well on the other days. Overall, the two last games… it’s a pity to bow out in such a way, but to be honest, I was really tired throughout the day today. I was just trying to get through it, and once the tournament victory was there you don’t care so much. Overall, a great experience to be here, I really, really like the city, it’s just a very good atmosphere here and at the tournament as well, and I hope to be back.

After winning seven games and losing two on Saturday, the final day was all about maintaining the lead and defending against potential challengers. In that regard things went perfectly, though it might not seem so from a glance at the results!

The first challenger was Jorden van Foreest, who began the day two points behind Magnus and was taken out in the first game.

Magnus then survived a terrible position against Veselin Topalov in the 2nd game, with the draw he achieved taking on hugely greater significance when in the same round his closest rivals Wesley So and Ian Nepomniachtchi both lost, to Alireza Firouzja and Maxime Vachier-Lagrave. 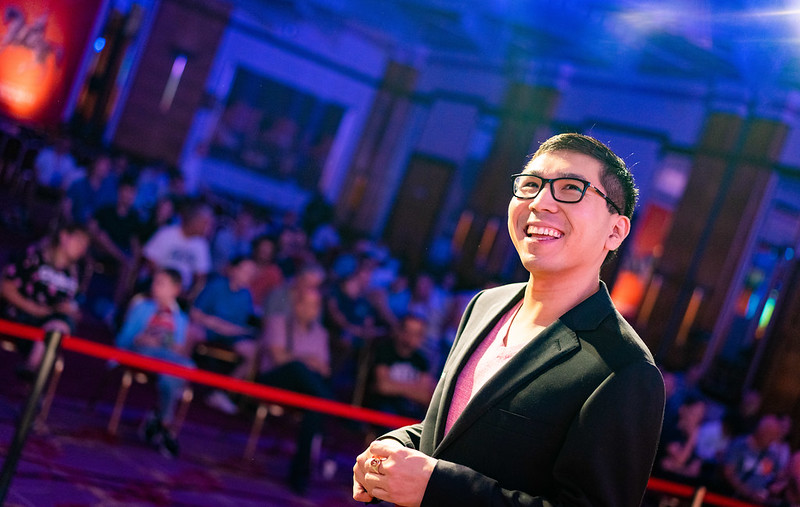 Wesley So had the potential to be Magnus Carlsen's toughest challenger — but instead made things easy | photo: Lennart Ootes, Grand Chess Tour

The 3rd round of the day looked massive on paper. Magnus had the black pieces against Wesley So, who was two points behind and needed a win. That was far from beyond the realms of possibility given Wesley had beaten Magnus the day before.

“I hope I will not lose like an idiot to Wesley again!” the World Champion had said, but he needn’t have feared, since So headed for the quietest of openings.

In the end it was even Magnus who won a pawn and applied pressure before a draw was agreed. 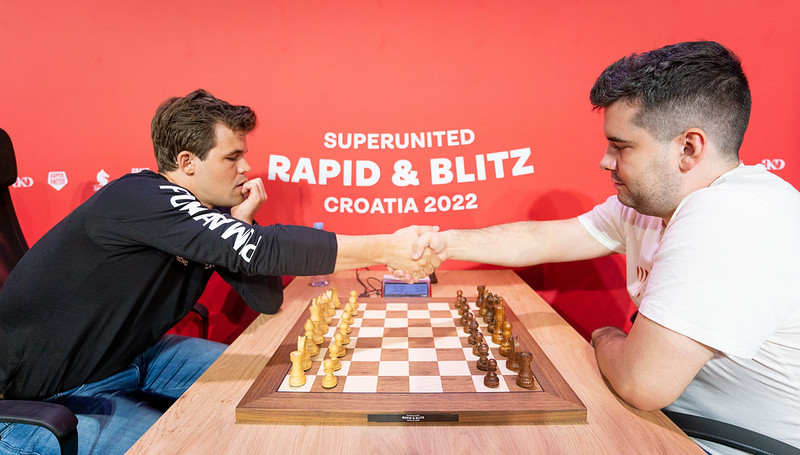 A tame draw against MVL would also turn out to be crucial, before Magnus ended the challenge of Ian Nepomniachtchi. In a seemingly quiet position, Carlsen’s b-pawn suddenly broke clear and won the game.

An amazing save against Shakhriyar Mamedyarov left Magnus needing just a draw in one of his final two games to clinch the title, though if he lost both games either Wesley So or Maxime Vachier-Lagrave could still catch him and force a playoff.

It couldn’t be both of them, however, since they met in the penultimate round. If they imagined Magnus could lose both games you’d expect them to go all-in so that one of them would have a chance of 1st, but alas, we got a near instant and well-known Grünfeld draw. Magnus had won the tournament. 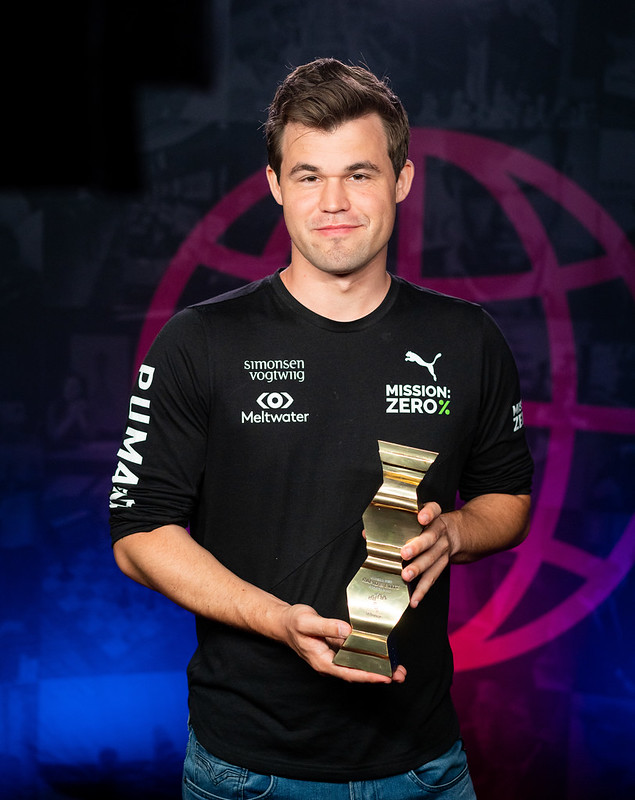 That put him in the position of knowing that the result no longer mattered shortly into his game against Alireza Firouzja, and at first it seemed as though Magnus might do Magnus things and win anyway. Instead, however, he went astray and slipped to defeat.

That created some potential motivation for the final round against bottom-placed Ivan Saric. A win would mean Magnus ending the tournament not just as the classical but also the blitz world no. 1.

If he knew about that statistic it didn’t help, however, since Magnus was absolutely crushed by Ivan Saric and lost 16.6 rating points to drop to 5th place.

That took a little of the shine off the win, but didn’t matter in the bigger picture. Magnus had won his 1st trophy after announcing he was quitting World Championship matches and can head to India in good spirits for the upcoming Olympiad.

The top French duo aren’t traveling to Chennai for the Olympiad, and we got a glimpse of what we’re missing. 19-year-old Alireza Firouzja had scored a shocking 3.5/9 on the first day of the blitz, but turned it around to beat Wesley So, Ian Nepomniachtchi and Magnus on the way to a brilliant 7.5/9 on the second.

That wasn’t the day’s best score, however, since Maxime Vachier-Lagrave, who scored 4/9 on Day 1, doubled that score to 8/9 on Day 2.

Maxime did it in his classic style of playing at a reckless pace at which he often fell into bad positions but could then escape with tactics that his opponents couldn’t spot at the same speed.

Perhaps the most aesthetically pleasing winning move of the day came in his game against Ian Nepomniachtchi, where Maxime was hit by 33.Bc7, attacking his d8-rook. His response? 33…d2!, leaving the other rook en prise as well!

More memorable, however, were the dramatic turnarounds. 48.Kh4?? was a self-mate move by Firouzja, since after 48…Rc7! there’s no defence against checkmate with 49.Rh7#

Then there was a game against Veselin Topalov where Maxime had been losing for so long that others would have given up all hope, but after 57…Kg5?? MVL suddenly won with 58.Nf3+!

It’s a perfect storm for Veselin, since White captures the queen with check and, again with check, will be able to pick up the b2-pawn. 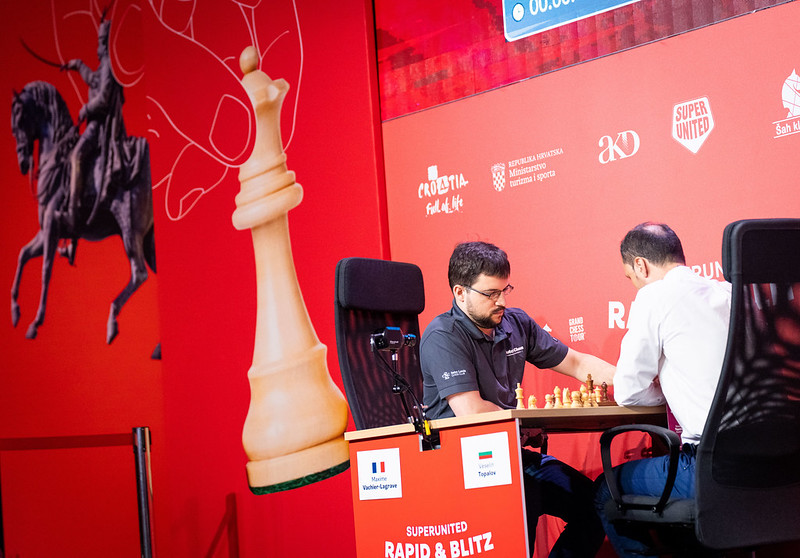 It was only fitting that after providing so much entertainment MVL and Firouzja both sneaked above So and Nepomniachtchi into 2nd place.

All that remained was the group photo, and what could possibly go wrong?

The next event on the Grand Chess Tour will be the St. Louis Rapid & Blitz in late August, closely followed by the final stage, the Sinquefield Cup, when Magnus Carlsen will again be a wildcard.

Before that, however, all eyes turn to the Olympiad that starts on Friday in Chennai, India!