Magnus Carlsen: “Unlikely I will play another match” except against Firouzja

World Chess Champion Magnus Carlsen confirms in a blog post for his law firm sponsors Simonsen Vogt Wiig that he’s unlikely to play another match for the title unless it’s against a representative of the next generation, which in effect means 18-year-old world no. 2 Alireza Firouzja. Magnus also explains how he felt Ian Nepomniachtchi would revert to type, commenting, “under sufficient pressure we all show the same strengths and weaknesses as prior to the World Championship preparations and training regimen.” 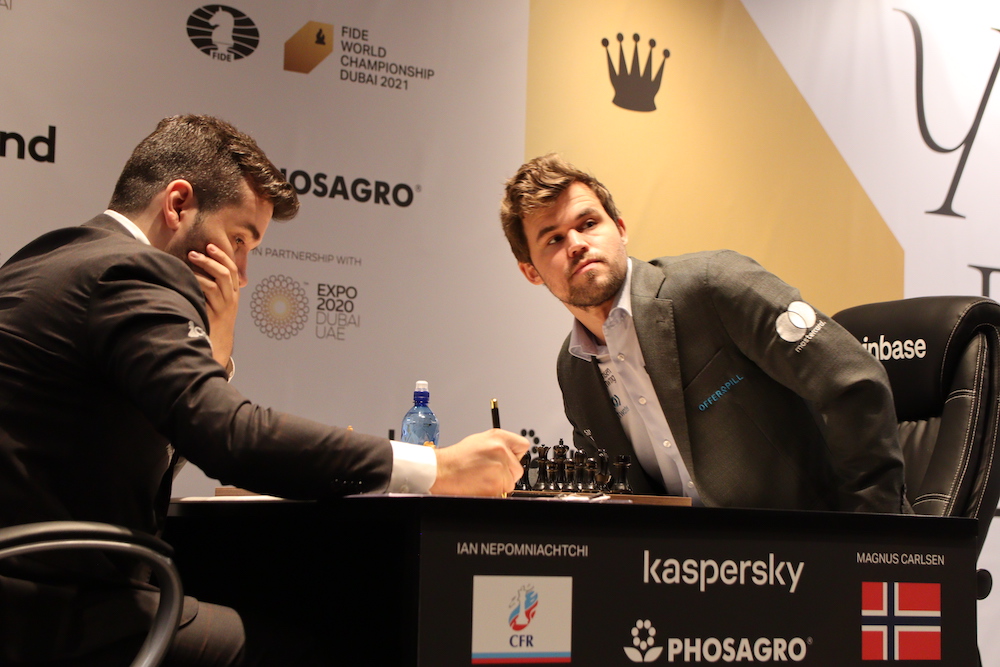 The 2021 World Chess Championship match in Dubai ended up going like a dream for Magnus Carlsen, who is now the 5-time World Champion after defeating Ian Nepomniachtchi 7.5:3.5. In a bombshell podcast interview after the match, however, he explained that this might well be his last match. Magnus has now repeated that statement on a blog he writes for his sponsors Simonsen Vogt Wiig. He explains:

I found that the negative has started to outweigh the positive, even when winning. I have by now played against the previous generation and three leading players of my generation. Being result-oriented has worked out for me in these matches, but it doesn’t feel sustainable long term. Passion must be the main driver. It is unlikely that I will play another match unless maybe if the next challenger represents the next generation. (Alireza Firouzja is at 18 already ranked 2nd in classical chess and has qualified for the next Candidates.)

Check out Magnus Carlsen’s reflections on the match in full:

In my 5th World Championship Match held in Dubai at the Exhibition Centre by the Expo 2020, the opponent was Ian Nepomniachtchi, Russia. He had qualified in the Candidates Tournament held in spring 2020 and then continued in 2021 as covid stopped the first attempt halfway.


I’m of course happy and relieved to win the match against Ian Nepomniachtchi. I’m truly grateful to all my seconds, my team present in Dubai, and my main sponsors Simonsen Vogt Wiig, Unibet and Meltwater.

Having struggled considerably in the two subsequent matches against Karjakin and Caruana, the Dubai match development resembled my first match in Chennai in 2013. The score was 6.5 – 3.5 in both matches while we played best of 14 games this time versus best of 12 in my previous matches.

Interestingly I spent my last preparations in Muscat, Oman in the same hotel as before Chennai. The climate in Dubai was also similar to Chennai and it suited me well.

Prior to the match one important pillar of psychological defence was the knowledge gained from previous matches that my opponent will gradually become the person I know so well from many years of tournaments together.

While he may be extremely well prepared and present the best version of himself, under sufficient pressure we all show the same strengths and weaknesses as prior to the World Championship preparations and training regimen.

Ian has historically often done well in the first half, while he struggles to maintain his level throughout. He played very well the first week, and things could maybe have turned out differently if he had been the first to score a win. Fortunately, I managed to win the crucial game 6 and felt very comfortable in the rest of the match. I may not have been in absolute top chess form, but I’m very proud of having managed to stay disciplined and avoid any rash decisions throughout the match. The final score 7.5 – 3.5 is of course flattering, and it belies the tense nature of the even struggle early on. 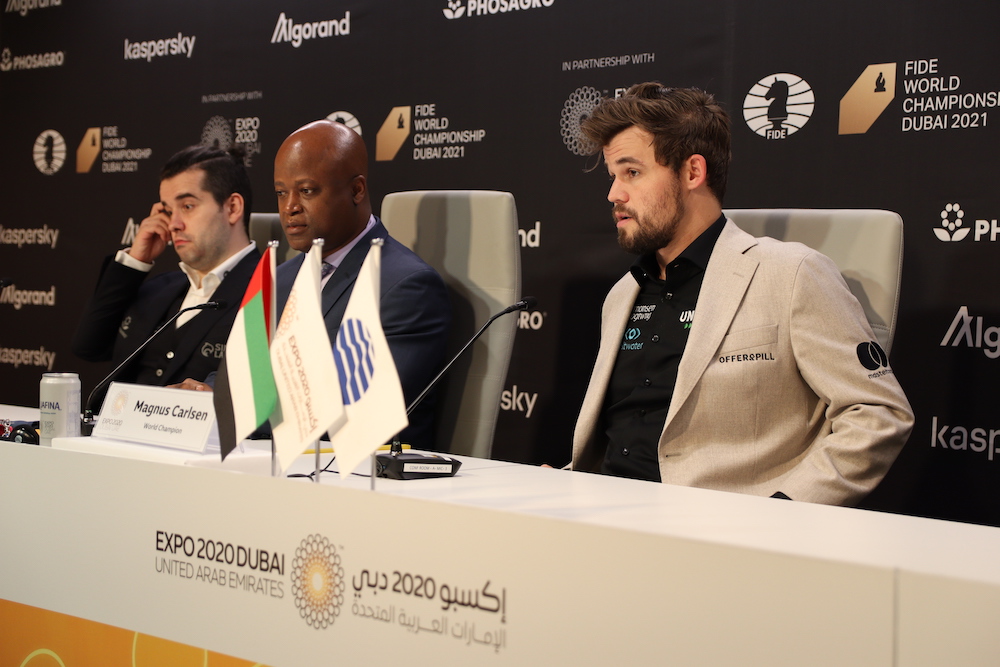 Ian Nepomniachtchi, Maurice Ashley and Magnus Carlsen at the press conference after Game 6, the longest game ever in a World Chess Championship match

My preparations for the match consisted of playing a lot in July and early August (Blitz in Pamplona and the World Cup in Sochi) and from late August throughout early October (Aimchess US Champions Chess Tour, Norway Chess, European Club Cup and the Champions Chess Tour final) in addition to training camps. After the final camp mid October in Spain, I spent the last 4 weeks in Norway before heading to Muscat 8 days before the match and the emphasis was on physical training, rest, some sponsor events for Simonsen Vogt Wiig (!) and others and online chess Blitz and Bullet.

World Championship matches differ significantly from tournaments. From early youth I have always liked to compete, but chess was for me mainly driven by passion for the game. I didn’t have any longterm ambitions except for learning and developing as a chess player. Later, as a tournament favourite, I was of course focused on winning as often as possible. Still, this ambition felt mostly as enhanced focus and passion, and less as pressure. Thinking about matches prior to Chennai, I thought it would be possible to apply the same approach as to tournaments of one game at the time, try to beat your opponent, avoid being distracted by losses. (Angry yes, but not distracted.)

From Chennai 2013 onwards the value and challenge of matches has gradually grown on me. It is very special. The dynamics are so different from tournaments, you cannot pretend otherwise. I managed to stay relatively process- and passion-driven against Anand in 2013, while in the last four matches it has been all about results. The potential downside is significant. You are working heavily for months with a team of dedicated seconds/coaches and in the end it may all be for nothing.

As discussed on a podcast shortly after the match, I found that the negative has started to outweigh the positive, even when winning. I have by now played against the previous generation and three leading players of my generation.

Being result-oriented has worked out for me in these matches, but it doesn’t feel sustainable long term. Passion must be the main driver. It is unlikely that I will play another match unless maybe if the next challenger represents the next generation. (Alireza Firouzja is at 18 already ranked 2nd in classical chess and has qualified for the next Candidates.)

I’ll travel to Warsaw December 25th to try to defend my Rapid and Blitz World Championship titles from Moscow in December 2019. (There was no R&B last year.)

The World Rapid and Blitz runs from December 26-30 and we’ll have live commentary and video right here on chess24.

Magnus’ stated long-term goal now is reaching 2900 in classical chess, but short-term that can also be a goal in both rapid (2842) and blitz (2892). The main aim in Warsaw, of course, will be to try and once again hold the classical, rapid and blitz titles at the same time, though it won’t be easy, with Alireza Firouzja and Hikaru Nakamura also among the confirmed participants.