Magnus Carlsen, Hikaru Nakamura, Teimour Radjabov and Wesley So are among the 16 participants for the $100,000 Opera Euro Rapid, the 3rd stage of the Meltwater Champions Chess Tour. The 9-day online event runs from February 6th to 14th and will once again be broadcast live on Eurosport, Norwegian TV and in multiple languages and styles here on chess24. The 16 players will be cut to eight on the first three days before the remaining participants play a knockout for the $30,000 top prize and crucial Tour points. 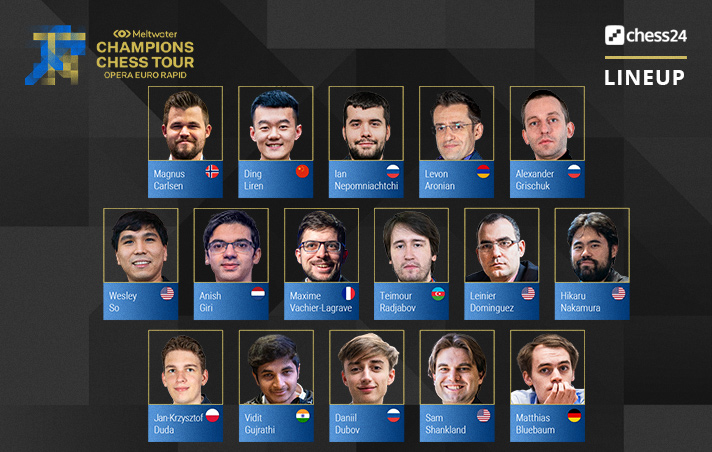 The line-up for the Opera Euro Rapid features 9 of the world's top 11 ranked chess players on the January 2021 FIDE rating list. It consists of the 8 players who are leading the Tour standings, 2 players by public vote and 6 Wildcards. 2018 US Champion Sam Shankland, world no. 14 Leinier Dominguez and German no. 1 Matthias Bluebaum are making their Tour debut.

The schedule is the same as for the Skilling Open and the Airthings Masters, with each day’s play this time beginning at 17:00 CET/11:00 ET/21:30 IST.

A 3-day Preliminary stage sees participants play each other once at rapid chess, with 15 minutes for all moves and a 10-second increment added to their clock each move.

The top eight advance to a knockout, where each tie is held over two days, with a 4-game rapid match each day. If the score in matches ends 1:1 a playoff is held, where two 5+3 blitz games are potentially followed by Armageddon, a single game where White has 5 minutes to Black’s 4, but a draw counts as a win for Black. 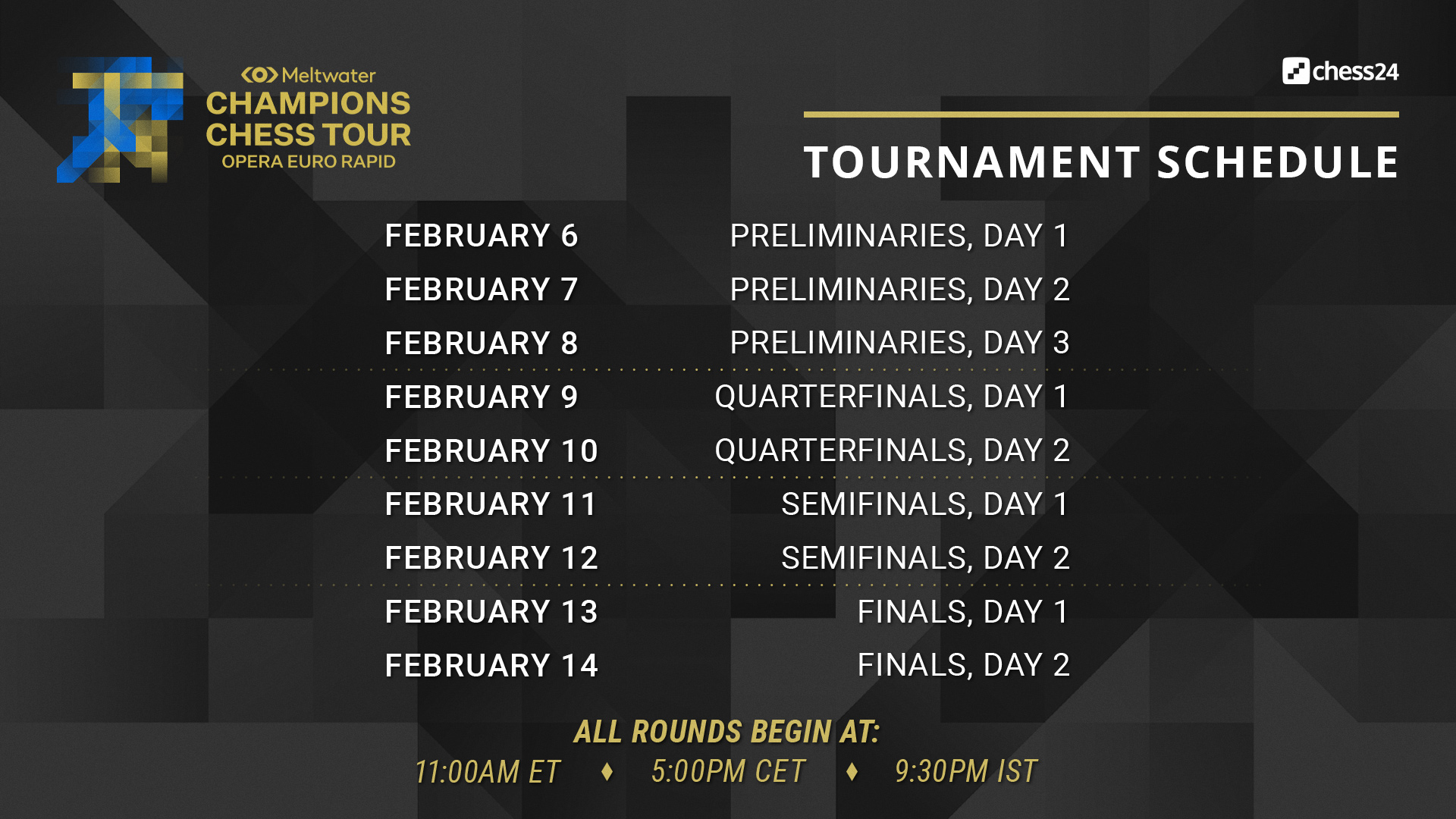 At stake is a $30,000 top prize and also up to 50 tour points (10 for finishing top in the prelims and 40 for winning the knockout). The current tour standings look as follows after the 1st Regular event, the Skilling Open, was won by Wesley So, and the 1st Major, the Airthings Masters, was won by Teimour Radjabov. 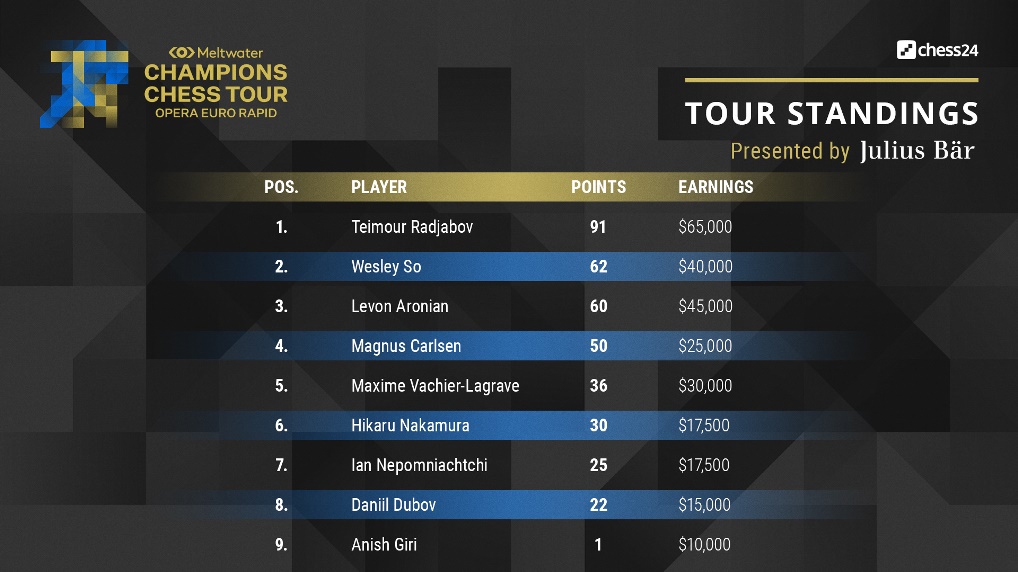 The top 8 in the tour standings after the Opera Euro Rapid will automatically be invited to the next event on the tour, the 12-player $200,000 2nd Major taking place from March 13-21. The race is also beginning to develop for a place in the $300,000 Tour Finals, set to take place in person in Meltwater’s San Francisco Headquarters this September. 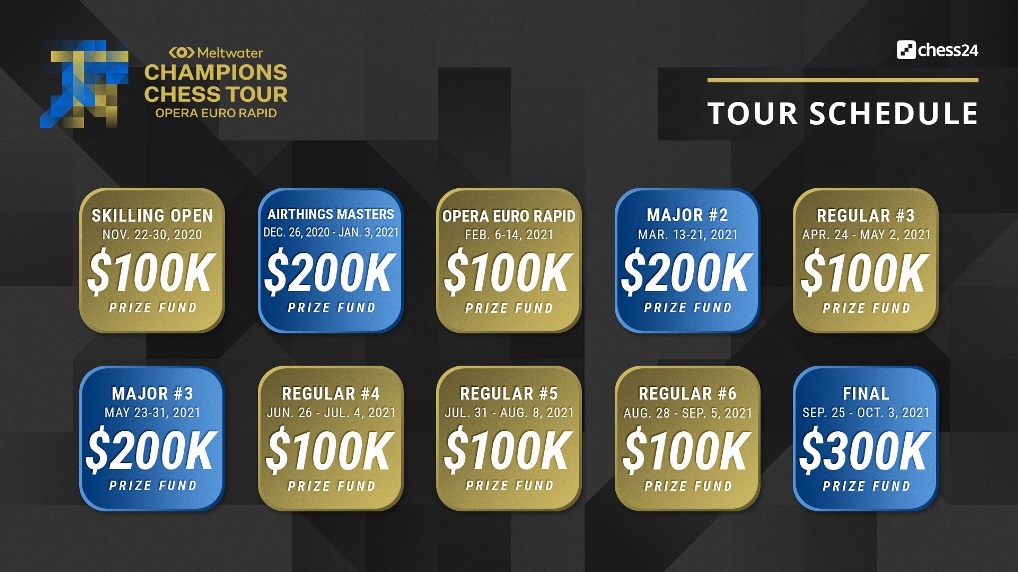 Gaming and eSports are becoming an increasingly important part of the browser experience. Chess streaming experienced explosive growth in 2020, and the Meltwater Champions Chess Tour on chess24.com garnered massive viewership. As many of our users are gamers, eSports and chess fans, we believe partnering with the Play Magnus Group and the Tour is a perfect fit for us. We can’t wait to see the games that will be played out during the Opera Euro Rapid.

Online chess at the highest competitive level requires serious tech, and Opera’s browser is exactly that. The Tour now has two tournaments in the top three most-watched chess events in recent history alongside the latest World Chess Championship. We believe the partnership with Opera – whose products are known, trusted and used worldwide by millions of people every month - represents a massive opportunity to accelerate the popularity of the Tour and chess. We are excited to have Opera as the title partner for the Opera Euro Rapid and the Official Browser Partner of the Tour moving forward.

The logo for the Opera Euro Rapid was chosen by a public vote among chess24 Premium members and is auto-generated from the sensational game that saw Daniil Dubov checkmate and knock out World Champion Magnus Carlsen in the Airthings Masters quarterfinals.

Chess fans will have less than a week to wait after the end of Tata Steel Chess before the world’s top players are back in action in the Opera Euro Rapid on Saturday February 6th!