Magnus Carlsen: “I’m hoping this time there will be fewer draws”

Magnus Carlsen and his team spent two weeks last month preparing for the match against Ian Nepomniachtchi in a resort near Cadiz, Spain. During the stay at the Royal Hideaway Sancti Petri, the World Chess Champion gave an interview to the manager of the hotel, Ignacio Martin, where he talked about the training camp, The Queen’s Gambit, his own first steps in chess and what advice he’d give to people just starting out in the game. 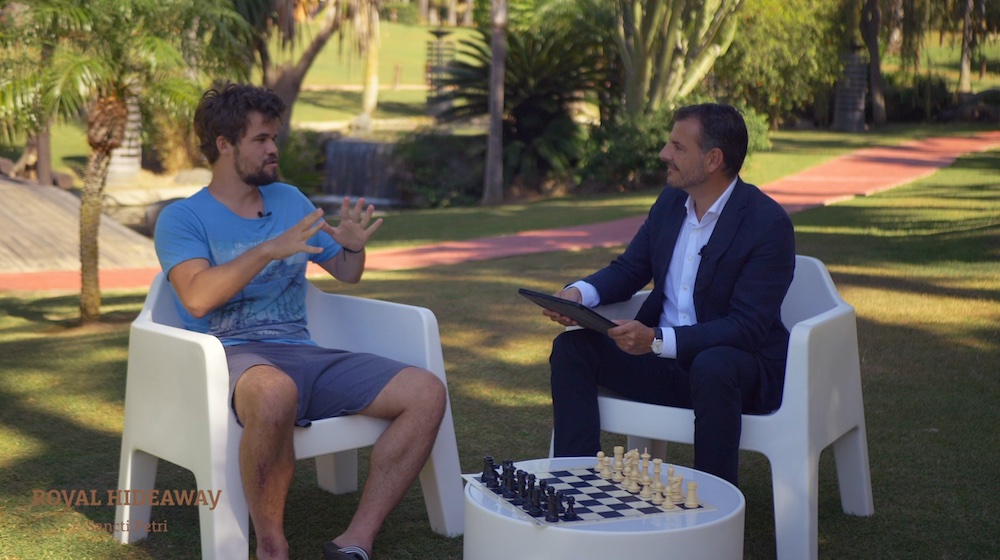 It’s a closely guarded secret who exactly Magnus Carlsen is preparing with before the World Chess Championship 2021 against Ian Nepomniachtchi starts in Dubai on November 26th, but some details of where he’s been preparing have emerged. Marca, the most read newspaper in Spain, revealed that Magnus and his team had stayed in a hotel near Cadiz from October 4-18.

There was a chess connection with the Royal Hideaway Sancti Petri (sadly no 10% code!), since the hotel’s maître d’ Guillermo García is a huge chess fan, and is offering master classes and simultaneous displays to guests of the hotel.

During the stay, Magnus gave a short interview, which you can watch below.

You became the World Chess Champion at the age of 22. How does it feel to reach the top of your sport at such a young age?


Magnus Carlsen: It was a great feeling, of course. In that year, 2013, most of my life was dedicated to that particular goal of becoming World Champion, but in terms of young age, in terms of overall age, it was fairly young. But in terms of chess age I’d already played for many years and I felt like a seasoned competitor already, and you see now people getting grandmaster titles at 12 and 13 years old, so you really have to start very early to be strong.

After the World Chess Championship was postponed in 2020, next month you will fight for the title in Dubai. How does a chess master prepare for this tournament?


There are different levels to your preparation for a World Chess Championship. I would say that the main component is chess preparation, it’s theoretical. But it’s also very important with physical preparation to be your best self in every way, both chess wise and physically.

You’re now in the Hotel Royal Hideaway Santi Petri in Cadiz. Which are the principle reasons that makes this place the perfect location to train for the World Chess Championship?

There are many good reasons to be here. First of all, the weather is absolutely beautiful, not too cold, and also not too hot, so it’s also perfect for activities like sports. We’ve been playing football, we’ve been playing padel, there are beautiful gardens here as well and also good food, so it’s really a very good location to prepare. Also it’s important that the place in total is not too big, so that you can be concentrated on the task at hand. 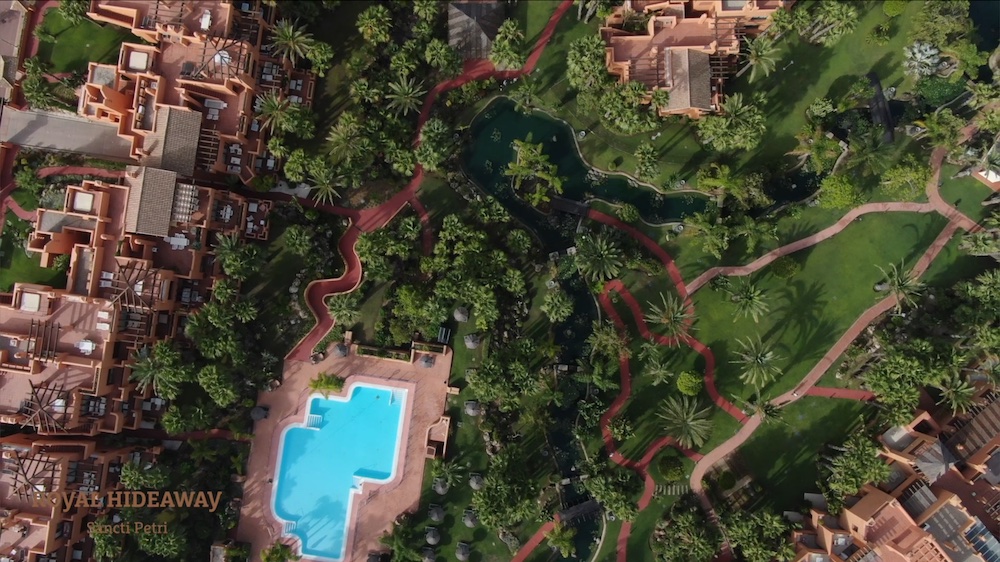 Inspired by the Queen’s Gambit TV show, Royal Hideaway Sancti Petri has created a unique chess experience. What are your thoughts on this TV show? And how did you like "Gambito de Maitre", our experience?

First of all, I loved the TV show The Queen’s Gambit. I thought the chess part was really, really well made, with lots of little nuggets about chess and chess history, and games that also I hadn’t seen before, as well as being a very interesting story that was well-acted. I would say here I’m loving the fact that the hotel, the resort, they’re innovating, thinking of something new. I know that Spain is a country that has a great tradition in chess, a lot of people love the game, and in that sense it’s a perfect combination. 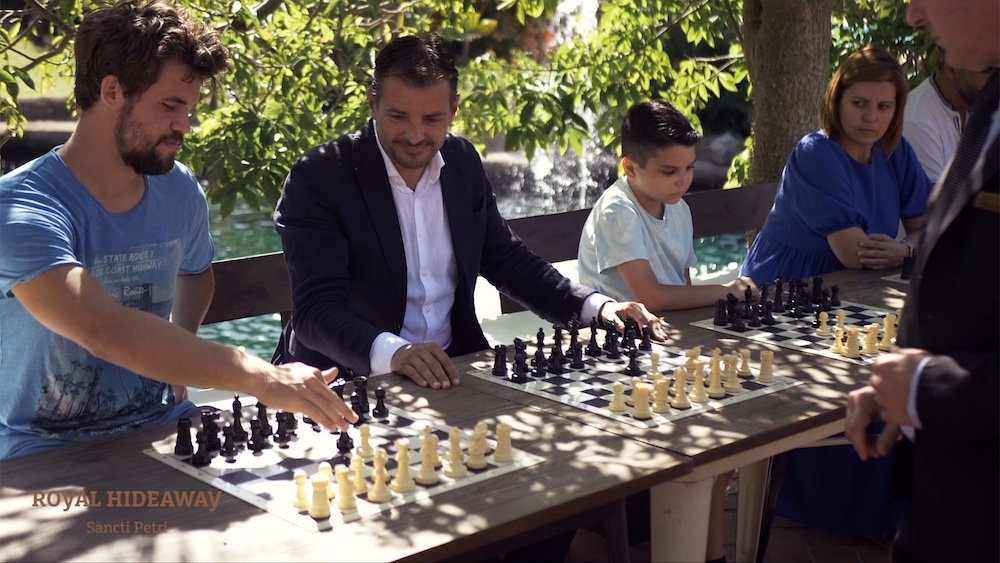 That awkward moment when you give a simul and one of the participants happens to be the World Chess Champion!

How do you imagine the perfect place to play chess?

I would say the perfect place to play chess is very close to here, it’s a beautiful garden with no distractions.

What advice would you give to a person who is starting the art of chess?

I would say for me personally what always was the driver for me in chess is that I found it to be fun and to be interesting, and that has lasted to me to this day. So when you start out in chess, be a little bit patient, because you’re not going to get everything immediately. But after that do what is interesting, do what is fun! If it’s chess, wonderful, because I think it’s a beautiful, transcendent game, but if it’s something else, do that.

Do you remember at what age you discovered chess and how was the way towards your vocation and professional career?

I would say that I started playing chess, learning the moves, when I was about five and a half years old, and I kind of liked the game, but I didn’t have the patience to sit down and try and study it to learn more, So I would say that I started learning more about chess when I was eight. I became really interested. My first goal was to beat my older sister, and after that I fell in love with the game and I would always study on my own, and I think it’s been only one way since. 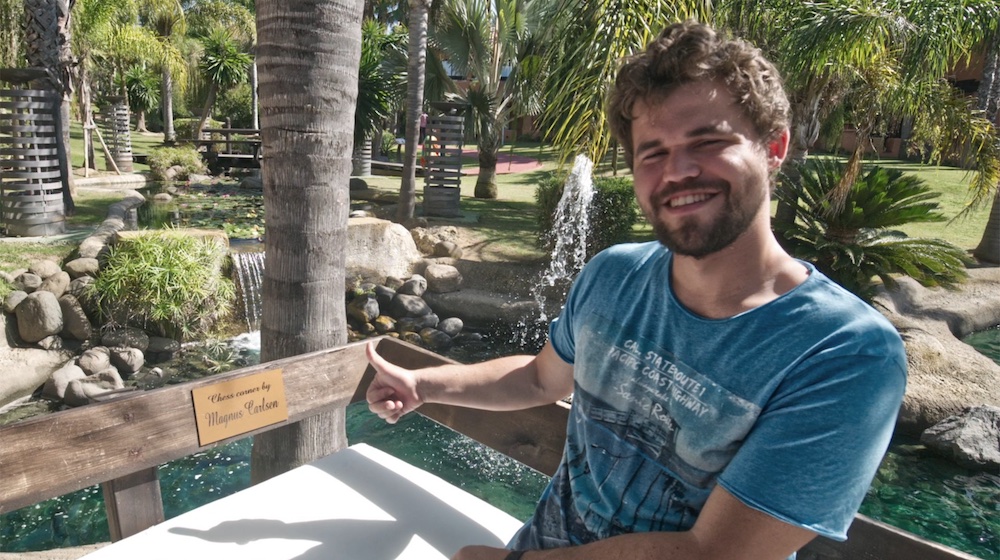 Magnus Carlsen now has a chess corner in Spain

What are the benefits of this sport for those who practice it?

I would say that two things have been important for me. Chess teaches you to think analytically and to be patient, but I think it also teaches you to make decisions under pressure. In chess you’re constantly under pressure from time factors, both on the board and also on the clock, and this you will find to be important in any profession, that you have to make well-calculated, but sometimes also quick, decisions under pressure, and this you learn perfectly from chess.

What do you expect from this Championship. How will it be different from the last Championships in 2018 and 2016?

Personally I’m hoping that this time there will be fewer draws than there have been in the last few times, because basically I have not led a World Championship match in classical chess since 2014. So the last two matches have been really close. I’m really hoping that there will be a little more back and forth rather than a drawn-out battle that it’s been the last few times. That is my hope and also my belief.

The World Chess Championship 2021 starts on November 26th, with Judit Polgar and Anish Giri commentating live on all the action for chess24 — or alternatively we have the Meltwater Champions Chess Tour team of David Howell, Jovanka Houska and Kaja Snare.

All the moves will of course be broadcast live here on chess24.