World Chess Champion Magnus Carlsen is in the final of the $50,000 Banter Blitz Cup after destroying 2675-rated Sanan Sjugirov 9:0. The Russian grandmaster was shell-shocked but full of praise for the combination of extreme speed and accuracy shown by his opponent. The dream final chess fans are now waiting for is Carlsen vs. his 16-year-old apprentice Alireza Firouzja, though India’s S.L.Narayanan will be out to try and stop that happening in Friday’s second semi-final. 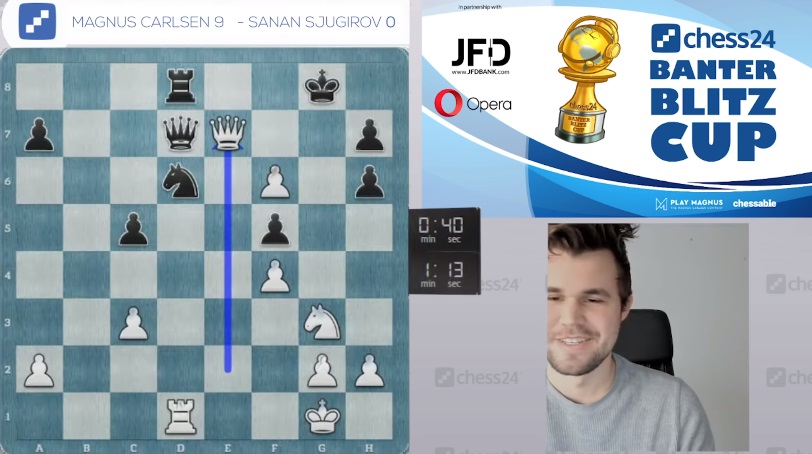 Magnus described his perfect 9:0 in the first Banter Blitz Cup semi-final as "a pretty nice day at work"

How do you warm up for a Banter Blitz Cup semi-final? By playing Banter Blitz, of course! Magnus decided to have an impromptu session, streaming using his Norwegian chess club’s account:

13 games, 13 wins later it was clear Magnus was in fine form, and that his hunger to win had gone nowhere!

One of the most exciting games was against Olimpiu G. Urcan, a Candidate Master and chess historian, who posted the full game:

Sanan Sjugirov was not, to put it mildly, the favourite going into the match…

…but as we’d seen in our preview,

So you might have expected a real battle, but in the end it was a pure exhibition by the World Champion, who took all his frustration with some technical issues out on his opponent.

The first game made it clear that Sanan hadn’t been watching the Banter Blitz earlier in the day, or he would have seen Magnus play 6.Rg1!? against the Najdorf in a 20-move win. Sanan thought for a minute on his next three moves and simply had no time when the blows began to rain down on his king. Here’s the brutal finish:

Sanan was briefly winning in a time scramble in the second game, which may have been his best chance to make a match of it, since after Magnus proved too fast he never looked back. Game 8 was the icing on the cake, even if it involved what Magnus thought at the time was a blunder, 19…Nf4!

And here came a crunching move that Magnus said afterwards he “really liked”, 23…Rxe5!! The point was that if 24.Nxe5 Black has 24…Qg5!, and the dual threats of Qxg2# and Nxh3+, winning the white queen, can’t be parried. Sanan commented, in Russian, “If it works, it's simply brilliant”, and later when he saw that it did, he added, “absolute genius!” He played 24.dxe5 and resigned after 24…Qg3!, when White can only delay mate by one move by giving up his queen.

You can see that Magnus had it all worked out when deciding where to put his king on move 21:

Of course the game wouldn’t be complete without the commentary of Pepe Cuenca! (a knowledge of Spanish is not obligatory)

One smooth Evans Gambit later and Magnus had done it, scoring a perfect 9:0:

Magnus had won 33 games on the chess24 Playzone in a row, moving from a rating of 3372 to 3465, and by winning a semi-final with serious money at stake (Sanan gets $4,000, while Magnus will earn $14,000 if he wins the final) it was hard not to think of Bobby Fischer. The US legend once scored 11/11 in the US Championship and famously scored 6:0 clean sweeps against Mark Taimanov and Bent Larsen on the way to the 1972 World Championship match. Of course the stakes were much higher there, but would even Bobby have been able to live with Magnus in his current blitz form?

As Nils Grandelius summed up in his first ever Banter Blitz session on chess24 when asked what makes Magnus special:

It's not really a special quality - it's just everything at once. I think he's better than everyone at everything, which sort of adds up!

If one player can stop Magnus in the Banter Blitz Cup it looks like 16-year-old Alireza Firouzja, who hasn’t conceded more points in any match than the 2.5 in his 8.5:2.5 quarterfinal victory over Georg Meier. Magnus commented:

In the final I'm guessing, as everybody does, that it's going to be Alireza, although Narayanan has been really, really good so far. But it's going to take a lot for him to win the semi-final.

There’s even a poll:

But S.L. Narayanan is definitely capable of pulling off a surprise. The Indian Grandmaster made it through to the semi-finals despite being hit by a power cut and other internet issues that cost him up to two points against Eduardo Iturrizaga:

That match takes place on Friday 10th April at 20:00 CEST and you don’t want to miss it!