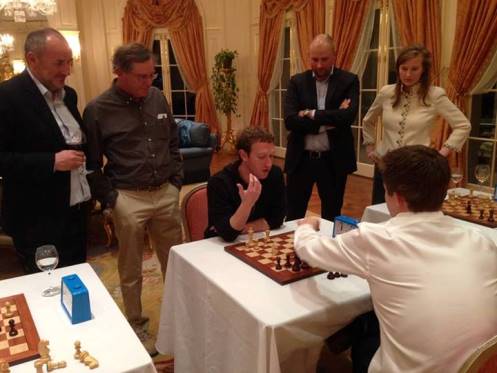 In what some are already calling the Game of the Century World Champion Magnus Carlsen took on and defeated Bill Gates. The world’s richest man was brought to his knees in approximately 12 seconds, but don’t let that deceive you – it was an epic battle, as you can see from some high-powered analysis from chess24’s Jan Gustafsson.

The young Norwegian World Chess Champion has been approaching his PR activities with the same will to power he’s shown in the chess world. His whistle-stop tour of America included giving Facebook Chairman Mark Zuckerberg some chess tips and playing a simultaneous display (10 games, 10 wins) at the Google Headquarters in California.


You’d think that would be hard to beat, but Carlsen is nothing if not resourceful. On Thursday he took on Microsoft co-founder Bill Gates for the popular Swedish/Norwegian (it’s complicated...) chat show Skavlan, hosted by Fredrik Skavlan. Carlsen had 30 seconds to his illustrious opponent's 2 minutes.

You can watch the game below in a video posted by NRK, the Norwegian Broadcasting Corporation:

Now over to German grandmaster and chess24 co-founder Jan Gustafsson:

1. e4 Bill Gates was 17 years old when Fischer became World Champion in Reykjavik in 1972, and this choice of first move was undoubtedly influenced by the preferences of the last US World Champion. "Best by test", as Fischer was wont to say.

1... ♘c6⁈ Carlsen decides to spring an early surprise on Gates. He may have felt the Berlin Wall, which served him so well on the way to winning the World Championship against Anand, simply wasn't up to today's challenge. With only 30 seconds on the clock engaging in a lengthy endgame looks risky. Nevertheless, I consider 1...Nc6 imprecise. The move takes him further away from the clock, costing precious time. Better options were

2. ♘f3! Gates makes it clear he has no fear of returning to the usual open games after 2...e5. At the top level this move has also recently been favoured over

2... d5⁈ Another dubious decision. First and foremost, the move is again on the wrong side of the board, and as a result Carlsen needed 4 of his 30 seconds to make only two moves. The move is also thought to be objectively questionable. Our recommendation would instead be

3. ♗d3⁉ A theoretical novelty! The move is perfectly logical as White defends his pawn and strives to castle short as quickly as possible. A more critical test would be

3... ♘f6! The World Champion finally realises the seriousness of the situation and begins to execute time-saving moves on the kingside.

3... ♘b4⁉ might objectively be stronger and may discourage potential followers of 3. Bd3, but given the format Carlsen does well to refrain from further excursions on the queenside.

4... ♕xd5 5. ♘c3 ♕h5 6. 0-0 The logical culmination of White's plans - castling is complete. The downside is that Carlsen now has a clear target for his attack. The alternative

7... ♘e5? Panic! Carlsen sees his time slipping away and tries to bring the game to a rapid conclusion with cheap tricks. High risk, but correspondingly high rewards!

7... ♗xf3 was objectively the best choice: 8. ♕xf3 ♕xf3 9. gxf3 0-0-0 leads to a comfortable endgame, but the 20 seconds he had left make Carlsen's decision perfectly understandable.

8. hxg4! Even the great philanthropist Bill Gates can't turn down the gift of a piece. And rightly so!

8... ♘fxg4 9. ♘xe5⁇ But this is too much of a good thing. Carlsen's bluff pays off. After the correct