Magnus Carlsen, Ding Liren, Hikaru Nakamura and Daniil Dubov begin battle this Sunday for the highest ever prize in online chess. The best of five sets semi-finals of the $1 million Magnus Carlsen Chess Tour see Carlsen take on Ding Liren while Nakamura plays Dubov, before the winners compete in a best of seven sets final for the $140,000 top prize. Yasser Seirawan, Peter Leko and Tania Sachdev will commentate in English. 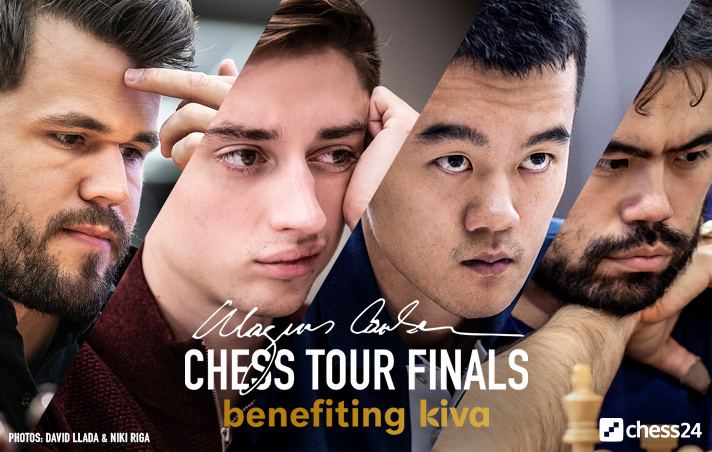 Let's take a look at some of the details of the tournament!

How did the players qualify?

The route to the Finals of the Magnus Carlsen Chess Tour was simple – the winner of any of the four qualifying events was automatically in. That meant Daniil Dubov, who won the Lindores Abbey Rapid Challenge, and Magnus Carlsen… though here it got more complicated, since Magnus won all the other events! The two remaining places went to the next best performing players on the tour – Hikaru Nakamura, who was runner-up twice (10 * 2 = 20 points) and got to the quarterfinals once (3 points), and Ding Liren, who reached three semi-finals (7 * 3 = 21 points). 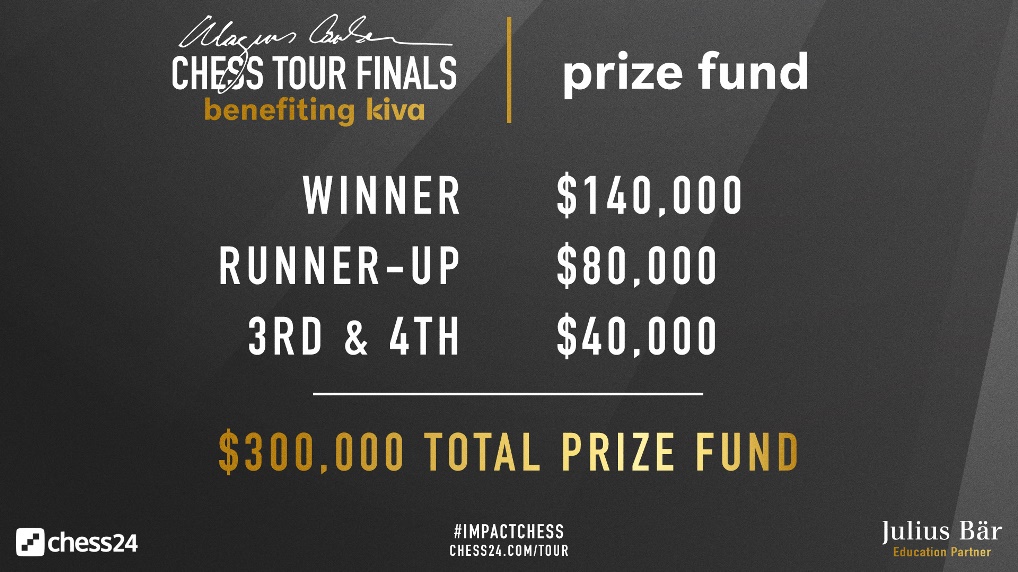 The format is one that’s become familiar to viewers of the Tour – and that Magnus proposed in late 2018 as a better way of determining the World Chess Champion than playing one classical game a day. Each day the players play a 4-game 15+10 rapid match, or set, to use the tennis term. There must be a winner. If the rapid games finish 2:2 then two 5+3 blitz games are played, and if the score is still tied then an Armageddon game is played where White has 5 minutes to Black’s 4 but a draw means that Black wins the set.

In the previous tournaments we saw best-of-3 matches, while this time the semi-finals will be best-of-5 (i.e. the first player to win 3 sets wins) and the final best-of-7 (first to 4 wins).

Where and when can I watch?

The matches are being played here on chess24 and start tomorrow, at 16:00 CEST on Sunday 9th August. There will be 12 days of non-stop action until Thursday 20th August, unless players win their matches early.

Our English commentary team will feature Yasser Seirawan, Peter Leko and Tania Sachdev, while we’ll also be streaming live in another 9 languages. For instance, Jan Gustafsson and Rustam Kasimdzhanov will be commentating in German. 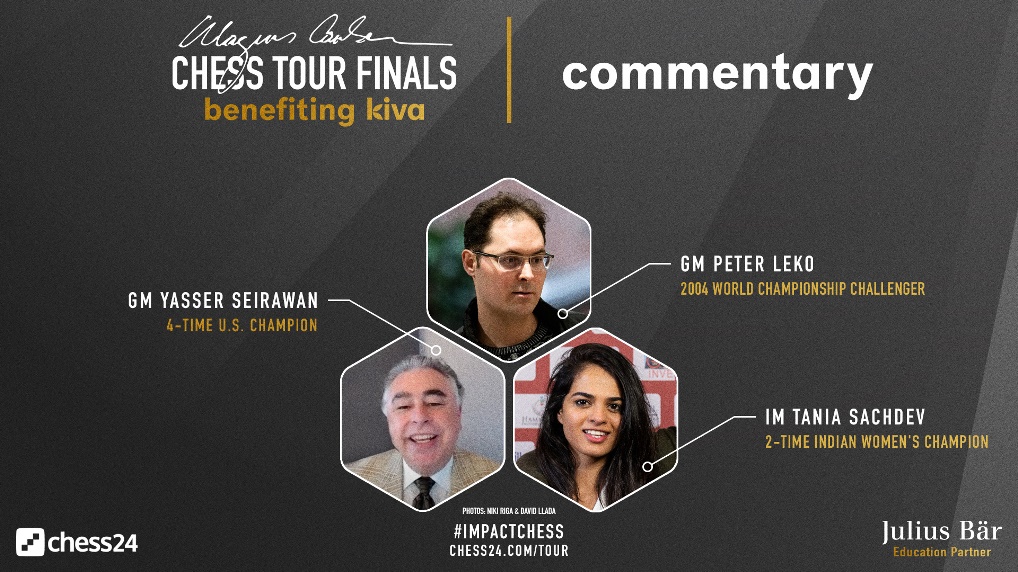 The live show will start half an hour before the games, at 15:30 CEST.

Kiva is an international nonprofit, founded in 2005 in San Francisco, with a mission to expand financial access to help underserved communities thrive.

chess24 has partnered with Kiva for the Finals and will donate 50% of the cost of all new Premium memberships purchased during the event to Kiva’s Global COVID-19 Response fund. chess24 SEO Sebastian Kuhnert explained:

We are going full circle here by using our event, that came about as a response to the COVID-19 crisis, to help the recovery from it. With the help of Kiva, which does incredible work around the world, we hope our contribution and the contribution of our members can help as many people as possible.

Chess is one of those universal sports that our lenders and borrowers across the world enjoy. We’re eagerly anticipating the Tour Grand Final ourselves, and even more excited to see how chess fans the world over will support small businesses to overcome the impact of COVID-19. Good luck to all the competitors!

The Finals feature four players who have all inflicted defeats on each other over the course of the Tour, so that while Magnus is, as always, the obvious favourite, anything could happen! 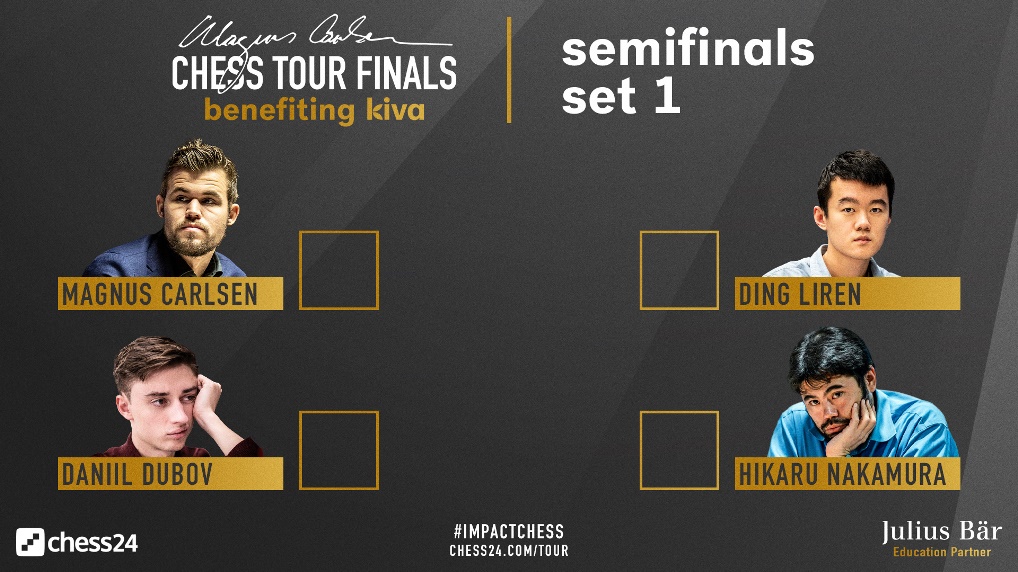 It's Carlsen vs. Ding Liren and Dubov vs. Nakamura!

Let’s take the semi-finals one at a time:

World Chess Champion Magnus Carlsen’s results over the course of the Tour have been phenomenal – winning the Magnus Carlsen Invitational, the Chessable Masters and the chess24 Legends of Chess and reaching the semi-finals of the Lindores Abbey Rapid Challenge, where he lost to Hikaru Nakamura despite winning the first set 3:0.

It could easily have been different, however, since Chinese no. 1 Ding Liren beat Magnus in the round-robin stage of the first event, the Invitational, and was then leading 1.5:0.5 in their semi-final after an incredible oversight by the World Champion.

Ding had an extra pawn in Game 3 and was close to clinching victory with a game to spare, but he let Magnus back into the game, blundered and there was no stopping the World Champion.


Magnus also beat Ding in the semi-finals of the Chessable Masters and then won their preliminary encounter in the chess24 Legends of Chess, a match memorable for taking place early due to Magnus’ Fantasy Football commitments.

Ding is playing from China where games start at 10pm in the evening and has struggled with internet issues behind the Great Firewall of China, but the world no. 3 is not a player to underestimate. Over the board he beat Magnus in the 2019 Sinquefield Cup playoff and also in both blitz games in the Kolkata Grand Chess Tour event. Magnus commented after the Legends:

It’s going to be unbelievably tough. He obviously had a terrible event here, but he’s shown such class in the other events of the Tour that it’s plain to see that he’s a very strong opponent, so I just hope his internet’s going to be fine in general and that we’re going to have some exciting duels.

2018 World Rapid Champion Daniil Dubov only played in two events on the Magnus Carlsen Chess Tour, but he made a big impression! Despite scraping into the knockout of the Lindores Abbey Rapid Challenge he then went on to blow away Sergey Karjakin (winning two of the three sets 3:0), Ding Liren (in two sets) and finally Hikaru Nakamura in a 3-set final thriller. Daniil criticised Hikaru for underestimating him:

There was some measure of revenge, therefore, when Hikaru inflicted the killer blow in the final round of their group matches that saw Dubov fail to qualify for the Chessable Masters Final 8 – that was despite Daniil having beaten Magnus and led the group with just two rounds to go! In “real life” the players have barely met, though Hikaru knocked Daniil out of the 2019 FIDE Grand Prix in Moscow by winning a rapid tiebreak.


As well as losing to Dubov in the final of the Chessable Masters, Hikaru also lost the Magnus Carlsen Invitational final to Magnus, and will be hoping to go one better this time round and win when it matters most. It’s certainly within the realm of possibility for the world blitz no. 1 and reigning US Champion.

Is there a FantasyChess contest?

Yes, if you think you can predict what awaits fill out your bracket here: FantasyChess contest for MCCT Finals

The battle begins on Sunday, with the live show starting at 15:30 CEST here on chess24. Don’t miss it!