World Champion Magnus Carlsen made a swing through Vienna earlier this week on his way to Berlin for the World Rapid & Blitz Championship, to face off against five amateur players in a blindfold simultaneous exhibition with a twist: the players had only 12 minutes on the clock, and could move at any time! Blindfold chess is challenging enough as it is, and Magnus has successfully taken on ten opponents simultaneously in untimed simuls. On this occasion, however, he lost on time in two of the five games. 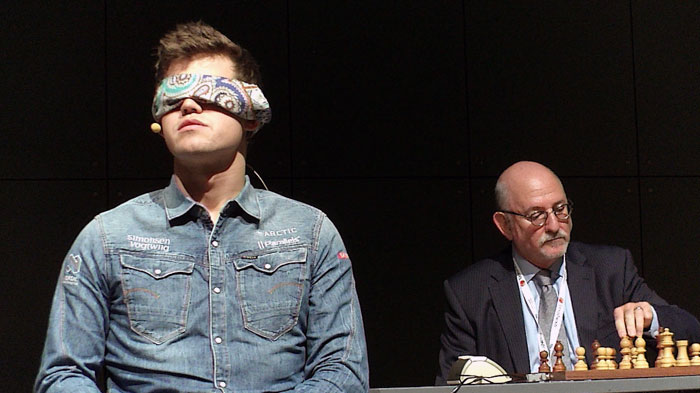 Carlsen, literally blindfolded, put on a great show in Vienna

The exhibition, hosted by Carlsen's sponsor Simonsen Vogt Wiig, was "an experiment", according to the World Champion, who previously faced three opponents under similar circumstances, but initially ran into trouble keeping the boards straight in his mind this time. Watch as the first attempt was aborted after less than 10 minutes:

This was partially the consequence of an unfortunate mix up in the first move of board two, when commentator Jan Gustafsson, who was also executing Carlsen's moves on the first three boards, inadvertently played 1.e4, when Magnus had said 1.d4. Carlsen let the erroneous move stand, but this quickly eroded the mental barriers he'd erected between the five games.

After a brief break, the five boards were reset and the simul proceeded. Magnus checkmated three opponents and was winning in the other two games but ran out of time; the clock situation was not closely communicated until quite late in the games, by which point it was too late to save them.

Snafus aside, the crowd of around 80 invited spectators to this private event, held at the Redoutensäle in Vienna's historic Hofburg Palace, were clearly entertained and impressed. Replay the whole show in the composite video below, from a recording of our live broadcast.

You can also open any game to take a closer look:

After the event, we grabbed Magnus for a few questions on his simul technique, the recently concluded World Cup, and whether he still feels it would make a good format to decide the World Championship, as he proposed two months ago. We started out by asking how he first got started playing blindfold chess:

Macauley: Do you have some tricks to keep the boards in mind?

Magnus: I have one face connected with one board, but then when they come at me at different times and different angles, it's more of an experiment than anything else... without the clock I can do loads more of course.

Would you use an increment if you could do it again?

I think that's part of the fun that I have a limited amount of time, but I probably needed either a bit more time or we just needed to be better drilled — we probably could have done with some rehearsal.

The World Championship next year has been announced for October, but no city or any other information. Do you think that's likely to happen?

I think the World Championship is likely to happen, but when and where I'm about as clueless as you are.

We just had a really crazy finale to the World Cup. Do you still think this would be a sensible way to decide the World Championship?

I don't know if it would be a sensible way, but I think it would be a fair way and also a fun way. I think it was great fun — sorry for Peter [Svidler], that was, to be honest, a pretty epic choke — but I'm also happy for Sergey [Karjakin]. He's a good guy. But there were terrible mistakes at the end of the Candidates Tournaments as well, both times. When the stakes are high, the players are tired, there are going to be mistakes regardless of the format... 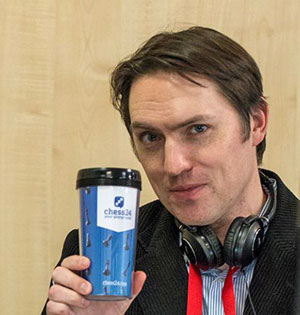